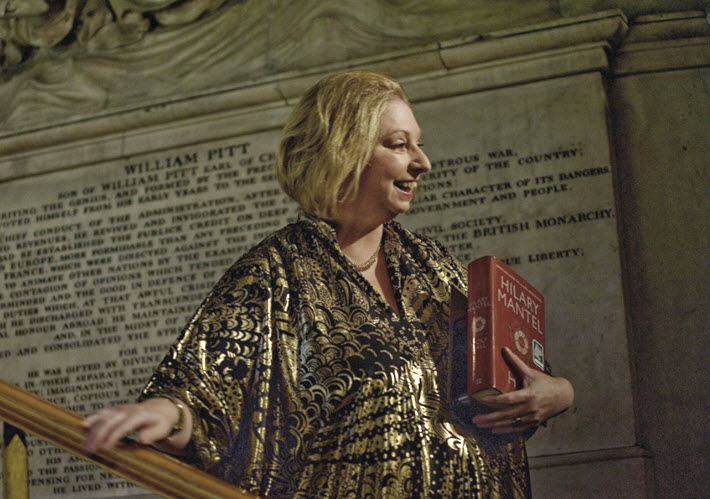 Ahead of special events for the Man Booker Prize for Fiction’s half-century anniversary, the foundation releases a desk diary with covers of its winning titles through the decades.

From the first 50 years of the Man Booker Prize for Fiction: Hilary Mantel is the first woman to have won the prize twice (in 2009 and 2012). Image: Provided by the Booker Prize Foundation, Janie Airey

‘The Right Book Can Be a Liberator’

To celebrate its 50th anniversary in 2018, the Man Booker Prize for Fiction has announced a number of events and projects aimed at looking back on a half-century of prize-winning books, and forward to the next generation of fiction writers.

Among its activities in 2018 is a “Fiction at Its Finest” literary festival set for July 6 to 8 at London’s Southbank Centre, as well as The Man Booker Prize Diary 2018 (Third Millennium Publishing) featuring the covers of all 51 titles that have won the Man Booker Prize for Fiction.

The book retails for £12.99 (US$17.38) and includes a foreword by Helena Kennedy, chair of the Booker Prize Foundation. It’s arrival, and that of the anniversary focus events to come, may be seen as good timing by some in the UK who are concerned by the new report from Arts Council England about the state of literary fiction in that marketplace.

The Man Booker was created in 1968 as a prize honoring Commonwealth literature. Not without controversy, the prize rules were changed—or “evolved,” in Booker terminology—in late 2013 to include writers outside the UK and the Commonwealth.

The first winner was Something To Answer For by PH Newby (Faber) in which it was proposed that “to be a crook a man must assume the society he lived in was honest.”

The most recent winner is George Saunders, now the second American to have won the prize. 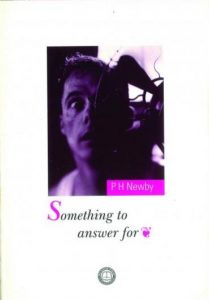 PH Newby’s ‘Something To Answer For’ was the first book to win the Booker Prize, 1969

Hashtagging its celebrations #ManBooker50, the Booker Prize Foundation “has teamed up with literary festivals across the world” according to information released to the media, “for 2018 to bring the celebrations to a global audience.”

While promising more announcements of this kind to come, the company has released this list of Booker author appearances so far:

In background notes on the development of the prize, administrators’ press materials say that at the time publishers Tom Maschler and Graham C. Greene approached the company that would become today’s food wholesaler Booker PLC for sponsorship, that Booker already was engaged in books, owning the literary copyright of “authors including Ian Fleming and Agatha Christie.”

In 1969, when the Newby prize took the first honor, “the book immediately appeared on the Evening Standard bestseller list–the first time that a British novel had done so solely as the result of winning a prize.”

The investment firm Man Group came aboard as a sponsor in 2002, creating the name Man Booker Prize for Fiction.

In a prepared statement, Kennedy, who has contributed the new commemorative calendar book’s foreword, is quoted, saying, “‘The Man Booker Prize is a banner for the power of books. It is a barometer of our creative vitality. 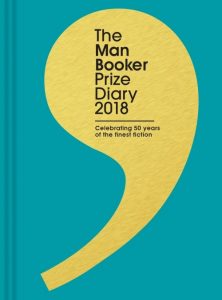 “In this landmark 50th year, we’ll be celebrating great writers and brilliant books so that we can draw more and more readers into the wonder of literature and the joys of readership. The right book can be a liberator, a healing potion or a stimulant better than any drug.”

“It is a powerful testimony to the Booker Prize Foundation that the Man Booker Prizes have become more relevant and far-reaching than ever before and, on this anniversary, that they continue to inspire the readers and writers of the future.”

And the Southbank Centre’s program lead in literature, Ted Hodgkinson, is quoted, saying, “At the height of this milestone year, we’re thrilled to present this culminating moment at Southbank Centre, building on many years of close collaboration and drawing on decades of unforgettable fiction.

“It has been a privilege pairing past winners and luminaries with recently honored authors and innovators to shape a festival that reflects both the prodigious depth of the prize and its continuing relevance.”

The programming, Hodgkinson says, is made up of “talks and performances” featuring “leading authors of the last half-century who have, with each passing year of the prize, expanded the possibilities of the novel itself, and through distinctive and irresistible prose, imagined the world anew.” 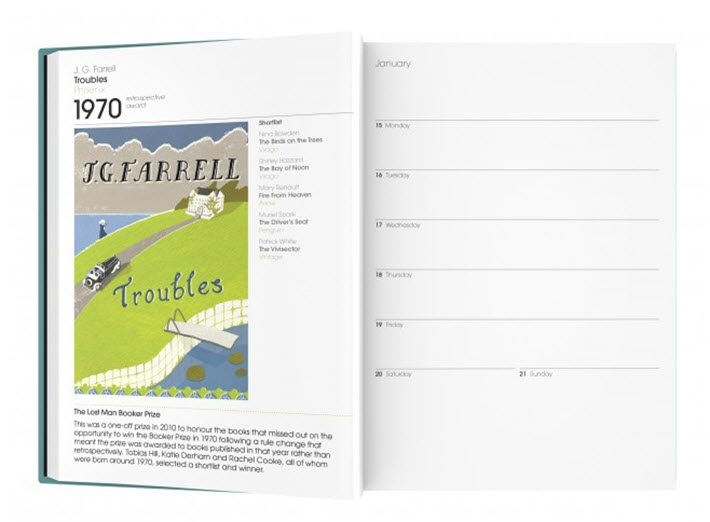 An excerpt from the Man Booker Prize 50th anniversary diary shows, JG Farrell’s ‘Troubles,’ the 1970 winning title of the ‘Lost Man Booker Prize,’ a special award created to honor books which in that year missed out on the chance to win the prize because of a change in rules.

A series of podcasts from the Man Booker Prize program is here.