As many publishers in the international industry put new emphasis on diversity, the International Publishers Association’s chief speaks on Elsevier’s experience in including LGBTI employees—and readers. 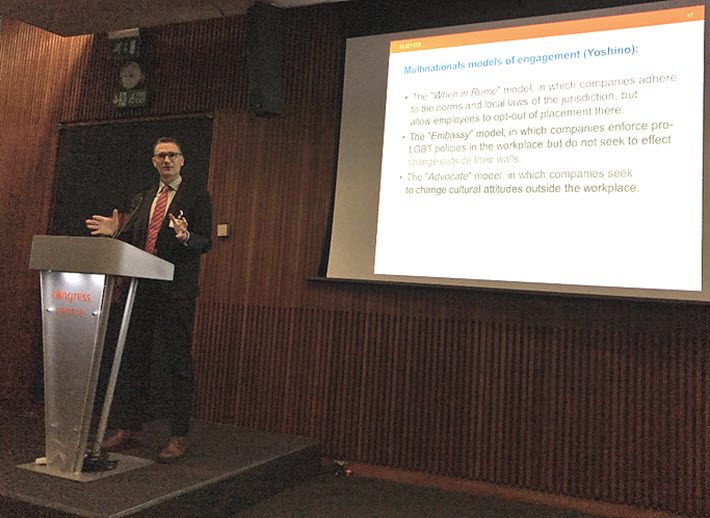 At one of the STM Week events focused on “The Future of Publishing” at London’s Congress Centre today (December 7), International Publishers Association (IPA) chief Michiel Kolman has spoken to an element of diversity and inclusivity in publishing that the industry focuses on less frequently than on gender and ethnicity.

The question of LGBTI representation, both in the publishing industry and in its output for a vastly diversified readership, can be uncomfortable for some to discuss, of course. Lesbian, gay, bisexual, transgendered, and intersex issues tend to be politically charged.

This week in the United States, for example, the Supreme Court’s interest in a case of a baker who objects to making a cake for a same-sex marriage has played out with typically high levels of rhetoric, as the Associated Press writes, between those who term it a case of religious freedom and those who see it as a religious exemption that can protect discriminatory action.

Kolman—who is a senior vice president with Elsevier in Amsterdam—approaches the topic from his experience in the corporate environment in the Netherlands as well as from his observations in his first year as IPA’s president.

Publishing Perspectives has had a chance to run some questions by him on the issues involved here. We’ve started with asking about his view from IPA’s world vantage point as to where the strongest efforts are being made.

This map, a part of Michiel Kolman’s presentation, uses Washington Post and Statistica information and graphics to indicate the presence among nations of laws involving homosexuality. Image: Provided by IPA

Publishing Perspectives: As you’re making your comments in London, we’re wondering if you have a sense for how the UK publishing industry is handling LGBTI issue, both in terms of employees and readership. Is this part of the diversity/inclusivity portfolio of issues, for example, included in the UK Publishers Association’s 10-point plan initiated earlier this year?

Michiel Kolman: From where I stand with my IPA hat on, I feel that the UK’s Publishers Association (PA) is leading the way in the area of diversity and inclusivity. There’s a very comprehensive approach with ambitious five-year targets such as the 15-percent BAME effort [promoting black, Asian and minority ethnic awareness in hiring and staffing] and a goal of achieving 50-percent representation of women in all senior roles.

I salute them for this. I know that now that gender and ethnicity are being addressed, other aspects of diversity are very much on the PA’s radar, including LGBTI inclusivity.

PP: A part of what you’re discussing in your comments today has to do with competitiveness, which you say is made stronger in an LGBTI-friendly workplace. What’s the dynamic there, in your experience at Elsevier?

MK: The key to competitiveness is innovation and creativity, especially in a world where the customer base is increasingly diverse. For this reason, companies that actively promote diversity and inclusion–which of course also covers LGBTI workplace inclusion–these companies score higher on innovation and tend to be more creative.

LGBTI employees who can be out and open tend to feel more involved and committed than staffers who are closeted. LGBTI-friendly companies therefore do a better job at retaining gay employees.

But what I find even more remarkable and encouraging is that straight employees feel more at ease at companies that are more diverse and inclusive. And that gives these companies an extra competitive edge. Being LGBTI-friendly at the workplace truly makes business sense.

PP: One of the statistics you cite in your commentary is from The Netherlands’ Institute for Social Research and indicates that LGBTI employees tend to experience burnout at a rate of some 20 percent, as opposed to burnout levels at 12 percent for heterosexual employees. Do we know what contributes to that higher burnout rate for LGBTI personnel?

“The LGBTI customer base tends to have higher spending power and levels of education, so it includes many avid readers who can easily afford books.”Michiel Kolman

MK: What we can learn from the significantly higher burnout rate of 20 percent for LGBTI employees compared to 12 percent for the straight staff in the Netherlands is that there’s still serious work to do in the area of LGBTI workplace diversity and inclusion.

While the legislative framework for LGBTI in the Netherlands is almost ideal—with marriage equality since 2001 for instance–we have to acknowledge that LGBTI staff are more prone to burnout than their straight colleagues. So our work on workplace inclusivity is far from over.

‘Workplace Pride’ in The Netherlands

PP: Elsevier has a “workplace pride” program, as we understand it, to support LGBTI staffers and their interests. Is this an Elsevier program per se, or part of a larger program in the Dutch market?

MK: Workplace Pride is an Amsterdam-based organization for LGBTI inclusion, with strong corporate membership including IBM, Shell, Cisco, Accenture, Philips, and also RELX/Elsevier.  I launched the LGBTI chapter at Elsevier, called Elsevier Pride, and am now the executive sponsor. 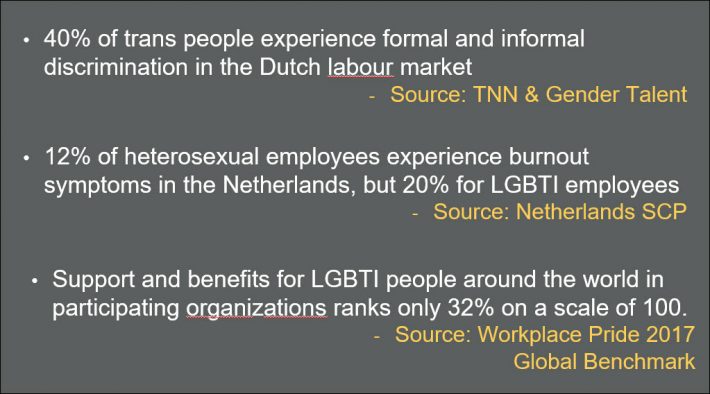 From Michiel Kolman’s presentation in London, statistics from the Dutch market. Image: Provided by IPA

PP: Is it possible to go over some statistics about LGBTI representation at Elsevier, such as the total percentage of employees who are representative of this group in the company?

“The customer base or readership is changing and diversifying over time, so it makes good sense to respond to this with a more diverse authorship and employee base in the publishing industry. This extends to LGBTI diversity.”Michiel Kolman

MK: For ethnicity and especially gender there are usually good statistics available, but this is not the case for LGBTI in the workplace. However, one aspect that has stood out positively at Elsevier is the relatively high participation of “allies” at the Elsevier Pride events. It’s these allies [non-LGBTI employees who want to support their LGBTI colleagues, formerly called “straight allies”] who make up the vast majority of the workforce and therefore have much more impact on the climate at work, including issues of LGBTI inclusivity.

PP: The category of “LGBTI” citizens is a big one, of course. Where do you see most of the support going within that group?

MK: In the LGBTI chapters, it’s usually the gay men who are best represented. We’re fortunate to have a very diverse core team for Elsevier Pride with a great mix of straight and gay, gay men, and lesbian women as well as bisexuals. In the last couple of years, we’ve seen a stronger emphasis across all our companies on the “B” and the “T” elements, bisexuality and transgender people.

PP: Lastly, while Elsevier isn’t in the standard fiction trade as much as many other publishers are, can you speak from your experience to the connection between a company that has a supportive climate that’s LGBTI-friendly and its ability to serve LGBTI reader-customers with more content for that sector of the reading population? Can a LGBTI-friendly publisher draw consumers from the community as readers?

MK: I see the publishing world very much as part of the creative industry, and the higher the diversity among the staff the more creative the companies.

Moreover the customer base or readership is changing and diversifying over time, so it makes good sense to respond to this with a more diverse authorship and employee base in the publishing industry. This extends to LGBTI diversity. The LGBTI customer base tends to have higher spending power and levels of education, so it includes many avid readers who can easily afford books. 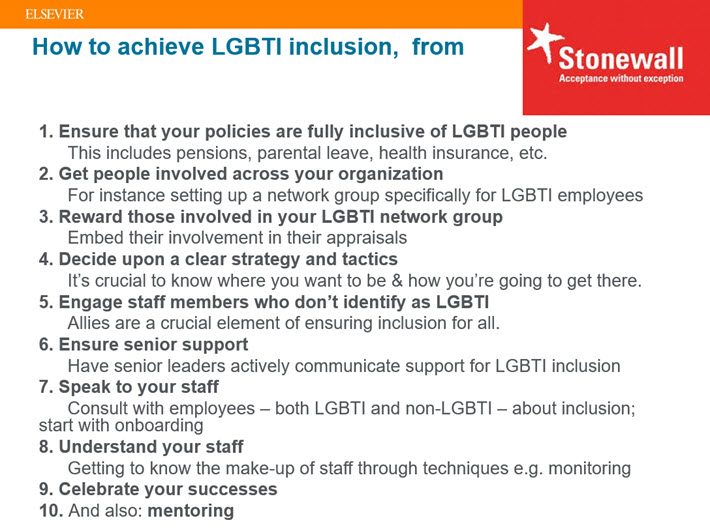 These are recommendations for businesses on LGBTI inclusion from the London- and Edinburgh-based agency Stonewall, used by Elsevier’s Michiel Kolman in his STM Week presentation. Image: Provided by IPA