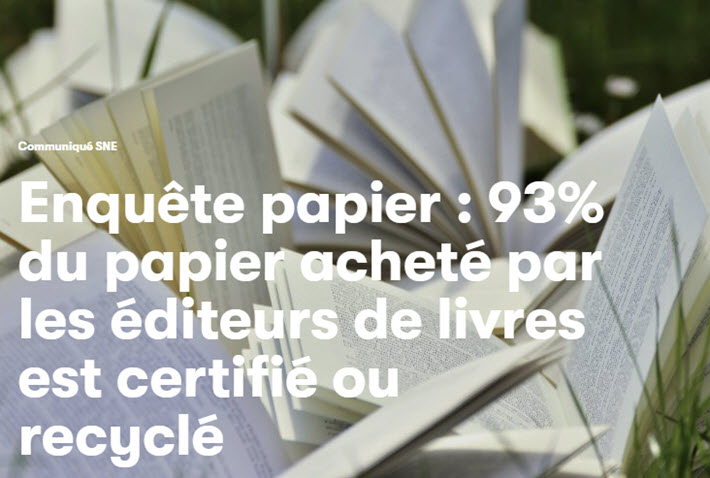 French publishers find that 93 percent of their paper is now recycled or green-certified, up from 73 percent in 2012. And Bowker’s new data client is a self-styled book discovery platform called Book+Main. 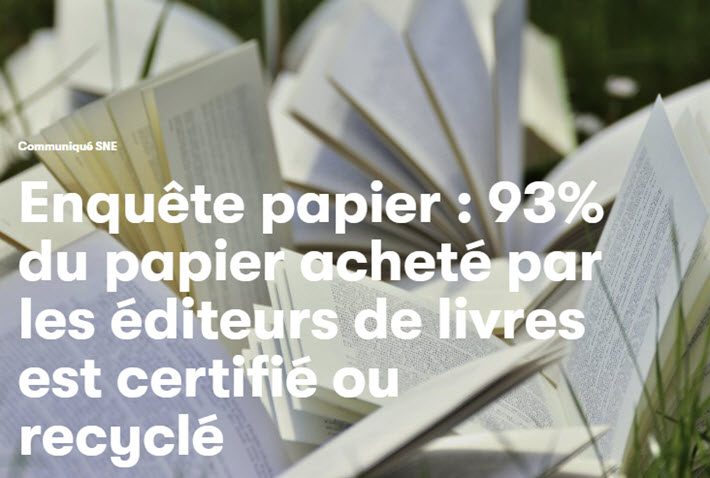 France’s publishers’ association, the Syndicat national de l’édition (SNE), has issued a report from its committee on environmental and manufacturing issues, establishing that 93 percent of the paper used in new books by French publishers today is either recycled or “certified paper,” the latter being paper sourced in an environmentally-friendly, socially responsible and economically viable manner.

This compares to 73 percent of paper used in 2012 being recycled of certified, meaning that, as the SNE’s statement puts it, “a real turning point has been produced” in this decade’s paper usage in France’s books.

The new survey is a follow-up to one from 2013 and comprises input from 56 publishing houses which together comprise more than 300 imprints and represent roughly 72 percent of the print copies of books published in France in 2016.

In addition to the ecologically promising character of so much of French print publishing, several other notable facts about the industry’s output are surfaced.

The SNE committee’s special program to monitor and report on issues of environmental sustainability is chaired by Pascal Lenoir of Éditions Gallimard.

The SNE overall has a membership comprising more than 670 affiliated publishers.

, the US ISBN agency and a metadata affiliate of ProQuest, has announced a new partnership in which it will supply data to the social media company Book+Main.

Book+Main‘s work is meant to support readers in engaging with authors, according to press materials. Its platform, called Book+Main Bites, is focused on romance—of course—and is described by the company as a book-discovery tool for readers, matching content to their interest. As such, promotional material says, it’s a sales and marketing tool for authors who use it to raise their visibility among readers.

Book+Main launched in November and is based in Chicago. In a prepared statement, its CEO, Tracey Suppo, is quoted, saying, “One key component of our platform is the ability for authors to add their catalogs to their profiles.

“Given Bowker‘s comprehensive coverage of the ISBN universe, their Web Services API has proven to be a great fit. Since partnering with them, we’ve been very impressed with their customer-centric focus and attention.”

Bowker’s Global Books in Print database—which includes US, Canadian, European, New Zealand, and Australian publications—is part of the agreement as is the company’s “value-added content data” which includes more than 100 years of bestseller cover images and citations from The New York Times and Publishers Weekly.