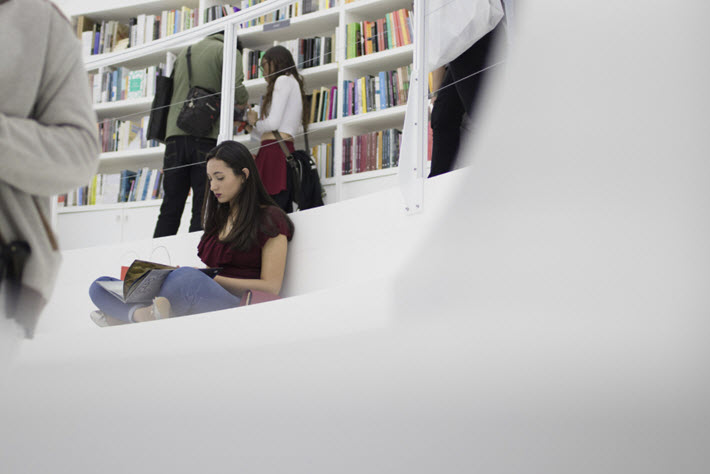 Expanding on his concept of the book industry’s future, UK publisher and commentator Michael Bhaskar talks about how important curation is to the survival and identity of book publishers. 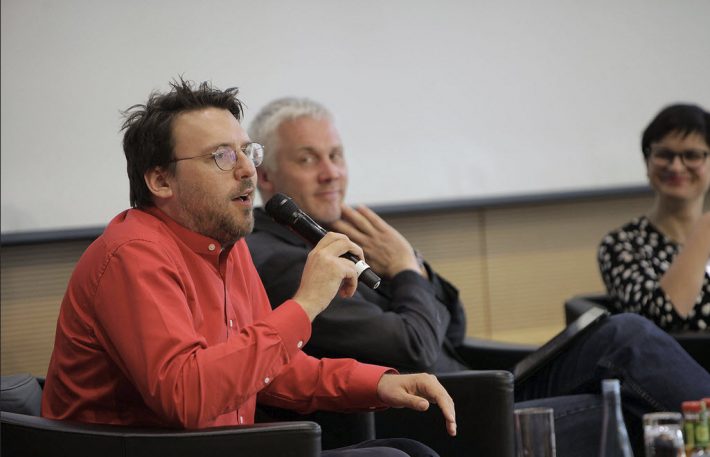 Curation: ‘Working in an Overloaded Context’ 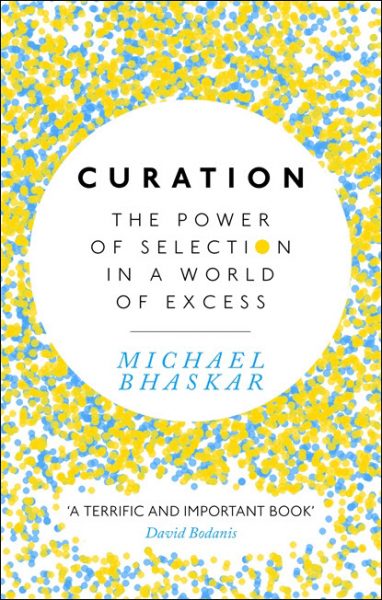 British author and publisher Michael Bhaskar spoke during the Guadalajara Book Fair at the end of last month on his assertion that curation is a key skill that book publishers offer in a digital media marketplace.

Increasingly crowded with content and overcomplicated by the multiplicity of digital distribution channels, the topic is one that Bhaskar surveys both as a writer and as a consultant with the Google-owned DeepMind research organization focused on artificial intelligence.

“In a context of an abundance of information,” Bhaskar says, “curation becomes even more important. Publishers must develop their curatorial paradigm, their unique DNA signature of how they make their choices, how they curate their books. In this turbulent world, expert, knowledgeable curation is our best store of value.”

Bhaskar is a co-founder of Canelo, a digital-first publishing firm in the UK and has been staged as an outlier in the publishing industry for years, making appearances in conference settings from the Frankfurter Buchmesse to Singapore’s StoryDrive Asia.

His book The Content Machine: Toward a Theory of Publishing from the Printing Press to the Digital Network (Anthem Press, 2013) began his inquiries into the coming impact of the digital dynamic on a book industry. His second book, Curation: The Power of Selection in a World of Excess (Little, Brown, 2016) effectively answered the question he’d asked, and this was the focus of his talk as part of the professional program at the Guadalajara International Book Fair, introduced by Mexican author and editor Tomás Granados Salinas.

“On the internet, you have all the world’s media and culture, and somehow you have to filter it, and that’s what I call the curation layer.”Michael Bhaskar

“Each publisher is distinctive in choosing what it’s going to publish,” Bhaskar told his audience, using UK independent house Faber & Faber as an example of a business model. “That British publisher is forever associated with literary modernism and the avant-garde, but throughout that period they were making their money selling medical textbooks, and if they hadn’t they would have gone bankrupt.”

“And Hachette UK, one of the biggest trade publishers in the country, he said, “keeps launching new imprints. Their whole strategy is to build imprints, giving them editors with very distinct visions.

“The value of publishing today lies in curation. Every choice made by a publisher must be incredibly valuable, each imprint defined by its choices, and we need to put more emphasis on imprints and on editorial selection because that’s what makes a book published by one publisher something unique and valuable, and not just one in a million.” 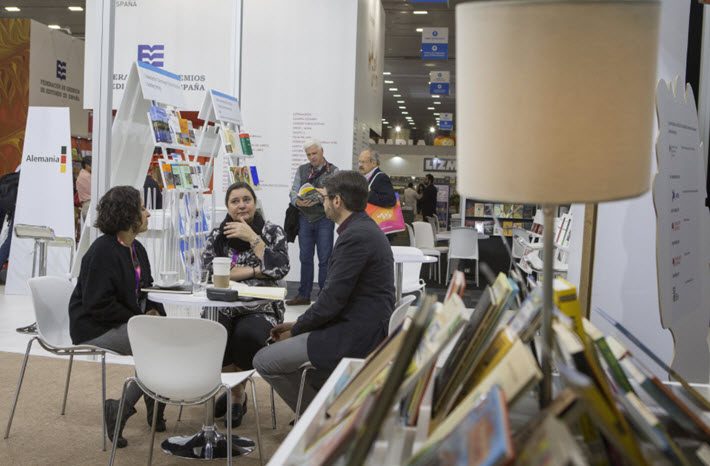 Curation: ‘Too Many Books in the World’ 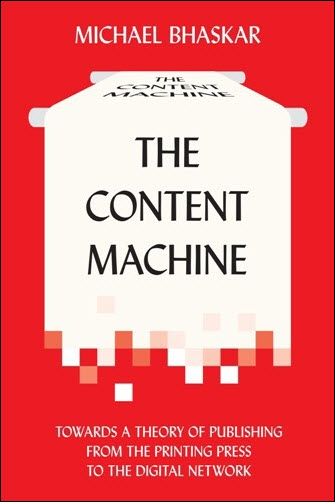 Bhaskar pointed to the fact that what publishers do is “of immense significance,” and he said that book publishers have been at the heart of the curation economy for centuries. “Curation is the basic core of publishers’ competence,” he said, “and that should make us feel proud and optimistic. You can outsource printing and distribution, or marketing and sales, but if you outsourced curation, you’d have nothing left.”

What’s more, curation’s importance increases with the prolifertion of titles in the marketplace.

“There are one million new books published in English every year,” Bhaskar said, “and that creates a new problem. What is the value in publishing the 1,000,001st book, compared with finding the book that you want to read? There are too many books in the world, and it’s slightly terrifying, and that comes on top of an enormous information overload.

“We’re working in an overloaded context, and people believe more choices is better; government policy always aims to expand choice, and classical economic theory states that the more options you have, the more you will sell. But this is not necessarily true,” he said, pointing to research showing that brands sell more of their product when they offer fewer options.

In turn, he said, the internet has made everybody a curator.

“On the internet, you have all the world’s media and culture, and somehow you have to filter it, and that’s what I call the curation layer,” he said, citing the way large internet platforms’ curation can have geopolitical consequences.

“Facebook curates the information sphere in which people exist” Bhaskar said. “Curation decides who gets to see what, and it’s not just a luxury idea for people like publishers, but an idea so important that it’s changing the world.” 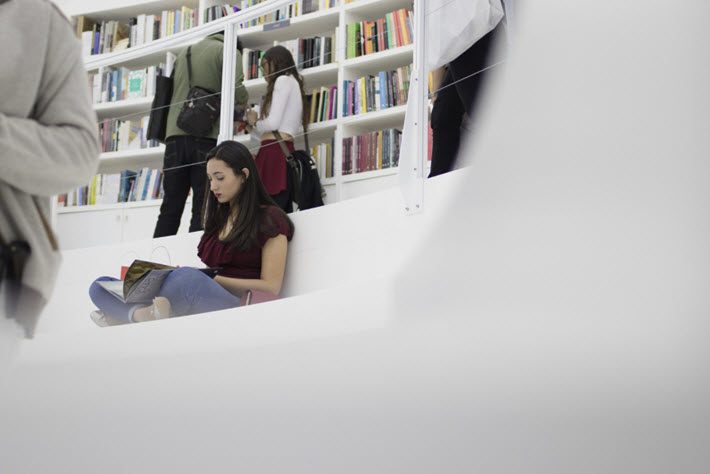 ‘Readers are also curators in a way that perhaps wasn’t true in the past,’ says Michael Bhaskar. This reader is in the Madrid Guest of Honor installation at Guadalajara International Book Fair. Image: Feria Internacional del Libro de Guadalajara © Ana Cristina Rodríguez Martínez

“Curation could easily go into censorship, and all you can do is to try to draw a distinction between a good curation that’s open and expert, and bad curation that’s just selecting and shutting things down.”Michael Bhaskar

“People still want to go into a bookshop and look at a unique collection of books,” he said, “but the way people choose books has also become automated. It’s about machine learning and algorithms. The value of human selection, of human taste—of a story or an argument behind a decision to acquire a book—has never been more valuable.

“We need the big data approach,” he said, “but we also need the personal, human and real approach, and that’s part of the dynamic that publishing is now caught up in. Who recommends books, and who decides what gets published and why? Those are the questions defining publishing.

“Readers are also curators in a way that perhaps wasn’t true in the past. We’ve always had a formal framework of curation in the book world—agents, publishers, book buyers, bookshops, and reviewers—all of whom are professional people curating books. But then there’s the informal system, the word-of-mouth recommendation, by a friend or a mentor. And that informal system has now become more visible due to social media and is something that all publishers need to factor in.”

But when is curation censorship?

“The truth is there is no way to answer that,” Bhaksar said.

”Curation could easily go into censorship, and all you can do is to try to draw a distinction between a good curation that’s open and expert, and bad curation, that’s just selecting and shutting things down.

“The trick we have to perform in the 21st century is create a much wider understanding in society about the difference between good and bad curation, and we need to get literate about this in a way that we perhaps aren’t already.”