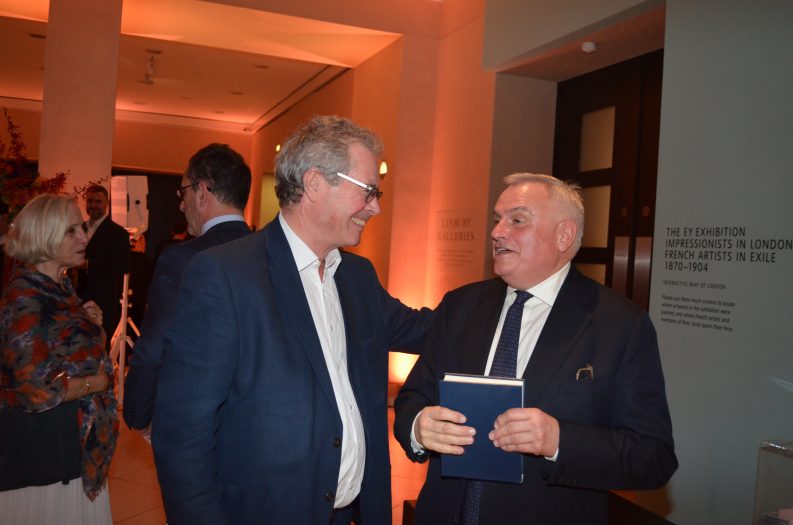 In part for seeing publishers and authors as ‘partners in the publishing process,’ Tim Hely Hutchinson is praised on his retirement from the helm of Hachette UK: ‘Amazing people throughout the business.’ 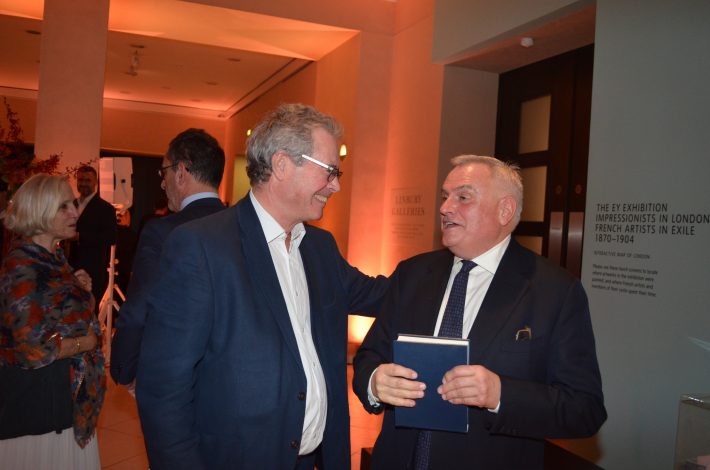 Malcolm Edwards, the former CEO of Hachette Australia, flew to London from Sydney for the occasion, while the Hachette Book Group in the United States was represented by its CEO, Michael Pietsch. Fellow present and past publishing executives at the Tate included the Baroness Gail Rebuck, who is the former chair of Penguin Random House; that company’s current chief, Tom Weldon; HarperCollins UK CEO Charlie Redmayne; and Bloomsbury executive director Richard Charkin.

“Tim resolved to make it his mission to run a happy house, as well as a successful one–as he put it, ‘A place where the people who love you would be happy for you to be.'”Arnaud Nourry

The evening was hosted by Hachette’s worldwide CEO Arnaud Nourry, whose speech was both funny and touching. Nourry outlined the contours of Hely Hutchinson’s publishing life, from his start as a Macmillan graduate trainee in 1975 through his founding of Headline in 1986, its acquisition of Hodder in 1992, and his 13 years at the helm of Hachette UK—“during which time,” Arnaud said, “he made 20 acquisitions [of companies], all selected because they shared our vision and values.”

He said that at Headline, Hely Hutchinson and his colleagues created a company that “radically changed publishing. Tim and Sue [Fletcher] established the principle that publishers and authors are partners in the publishing process. Headline adopted a number of ‘author-friendly policies,’ including the uniquely straightforward contract that apparently Tim himself typed.”

Among guests, Curtis Brown’s Gordon Wise praised Hely Hutchinson’s “mixture of business and bonhomie” and his ability “to always see the long view.” Others said he was “firm but fair,” or simply “decent.”

Nourry ended his remarks recalling an address that Hely Hutchinson gave a year ago. “Last year, opening the first Publishers’ Association conference on diversity and inclusivity, Tim told a story from his early days in publishing of a colleague who had been frightened to go to work every day. On retirement, this colleague called for those in management positions to use their authority kindly as well as competently and to make everyone, of every background and disposition, feel welcomed, valued and understood.

“Tim resolved, there and then, to make it his mission to run a happy house, as well as a successful one—as he put it, ‘A place where the people who love you would be happy for you to be.’

“Carmelite House,” Hachette UK’s London headquarters, “is such a place. It is a beautiful building, filled with light and color, epitomizing, in brick and mortar Tim’s vision for the company. Tim has created a place where staff and authors are honored and valued and where everyone feels empowered to create their best work.”

Then Nourry took Hely Hutchinson by surprise and announced that the company’s new UK distribution center, currently being built, will be named the Hely Hutchinson Center in the publisher’s honor. 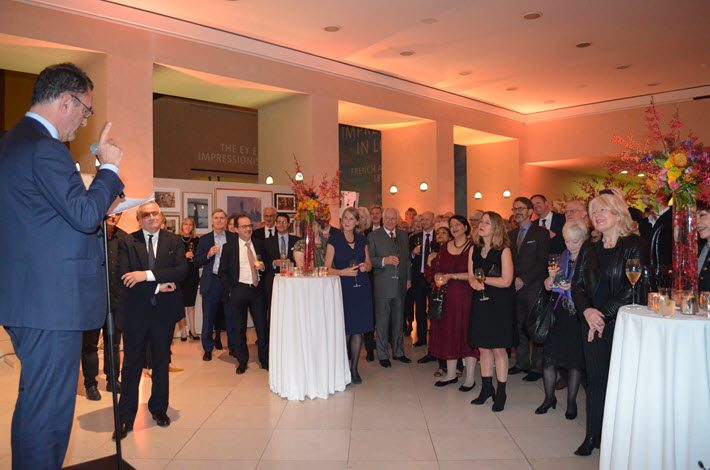 Tim Hely Hutchinson said that he’s “intensely proud of what we have created at Hachette and this is greatly to do with recruiting and energizing talented people.”

In his own comments, Hely Hutchinson talked about the gifts he had received.

“Arnaud and my British and international board colleagues gave me a drawing by my hero John Minton, a prince of the neo-romantic movement in British art. Drawn just after the war, entitled Portrait with Landscape Beyond, it’s an icon of the movement, showing a lonely young man looking pensive against a bewildering mystic landscape. I, perhaps surprisingly, empathize with him, and this is an extraordinarily sensitive, as well an extremely generous, present.”

Hely Hutchinson said that he’s “intensely proud of what we have created at Hachette and this is greatly to do with recruiting and energizing talented people.

“I marvel at the amazing people throughout the business,” he said, “and I am so pleased they will be led for the foreseeable future by David Shelley.

“Change is essential for healthy publishing,” Hely Hutchinson said, “and I am sure David will lead many changes at Hachette.

“I know he will do this not only well, but also with a deep consciousness that this is a people business in which a successful house is a happy one. I wish him and all my colleagues an incredibly satisfying, exciting, and successful future.

“Although I shall be around for another year as a consultant, this party marks a watershed, as I intend to take a backseat from now on and to be in the office rather less often. I should tell you that, although I have loved my work in publishing with all of you, I am excited too about this new chapter in my life.

“To me, tonight is a celebration of both the past and the future.” 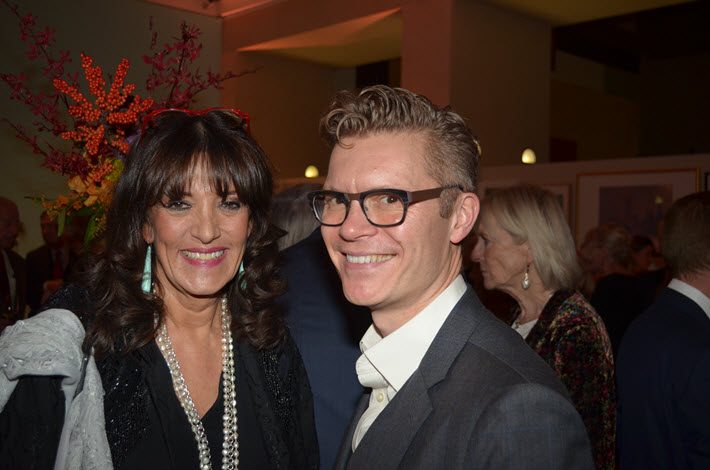