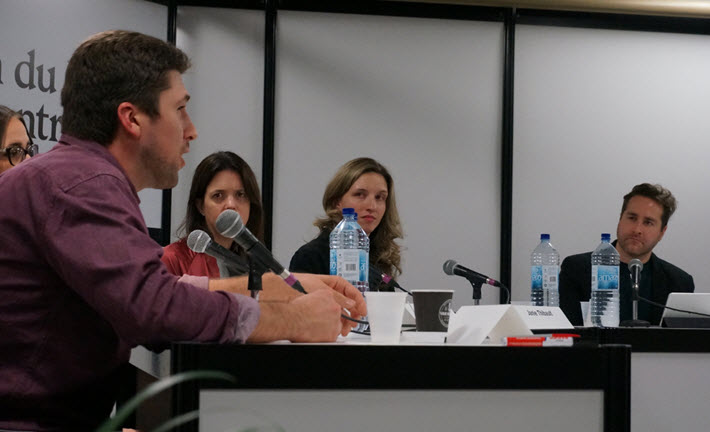 Using the social media to promote publishing is frequently a trial-and-error process, but the ‘new influencers,’ a panel in Montréal’s professional program asserted, are the ones who can reach consumer-readers where they live. 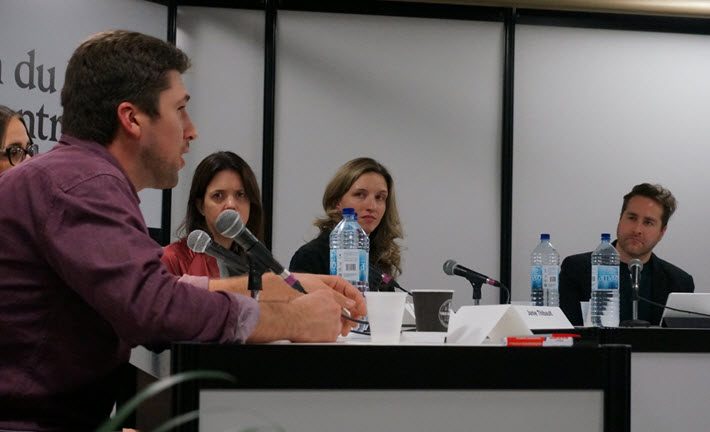 ‘The Goal Is To Have People Read Our Books’

There’s pressure on many publishers’ social-media managers today to delivery marketing miracles on ever-shrinking budgets. Coping with that reality was at the heart of a “new influencers” session moderated by Jean-Philippe Cipriani in the professional program of the Salon du livre de Montréal, which closed last week.

Panelist Janie Thibault is Groupe Librex‘s consultant for all things online. This year, she produced a book trailer depicting authors as superheroes to launch the autumn book season. New special-effects video apps and the reduced costs of media equipment has, to some degree, democratized the process of media promotion and gives many in the business an opportunity to show their originality and redefine marketing campaigns.

Although the Thibault video is tame by today’s slick advertisement standards—a series of authors standing still as special effects surround them—Thibault says it struck a chord with readers. And despite the authors not having to really go out on a limb, it wasn’t easy to get them onboard.

“Bringing in Caroline St-Hilaire,” Thibault said, referring to the author, former MP, and mayor of Longueuil, “and telling her she’d be Wonder Woman was a challenge. She needed convincing.” But the secret, Thibault said, is to have someone doing such media development full-time, with the capability to try and fail when necessary.

“Not every publisher can have someone experimenting with social media full time,” Thibault said. “I have the chance to see if Janette Bertrand,” an author of popular romantic and biographical novels, “would work on Snapchat. And, guess what, people don’t want to see her on Snapchat.”

Author David Goudreault, novelist and poet, is not averse to risk-taking, either, he said, ready to do what it takes to get people engaged in buying and reading his books. But he’s adamant that it’s not about clickbait.

“Social media,” Goudreault said, “is a commercial space and I don’t publish personal stuff, I play the game. The goal is to have people read our books but also to have people read in general. Yes, it’s auto-promotion but not peddling. When you take the time to create a sincere book trailer then you respect your reader.”

Goudreault referenced a “novel ninja,” who distributes free books around the city to unsuspecting shoppers in a mall.

And Audrée Archambault, perhaps the best-known BookTuber in Québec, said that she also advocates such guerrilla tactics, including hiding books in the metro.

Archambault’s YouTube channel, Elle aime bouquiner, has grown and gained in credibility and now is targeted by publishers, some of which collaborate with her for specific promotional campaigns.

Archambault said she’s aware that subscribers tune in as much to discover new books as to watch her play with her dog—there’s a cult personality at play in her work. 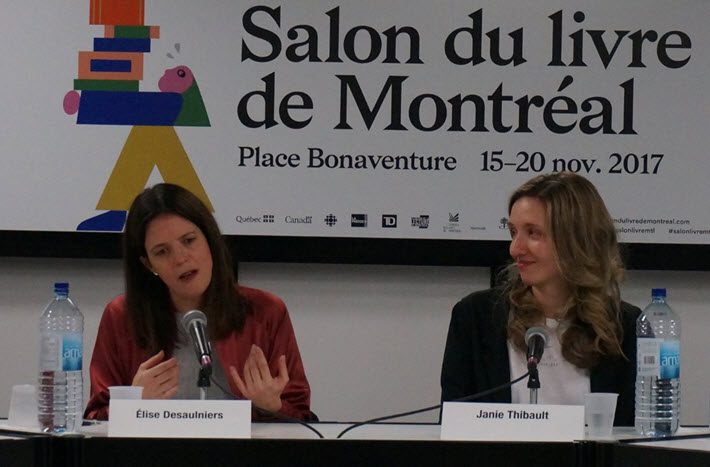 “Right now, the door is wide open…It’s advertisement that you can’t buy.”Janie Thibault

While most publishers have begun promoting their authors on social media, how can the rest of the book industry, booksellers and libraries, for example, carve out digital territory for themselves?

According to panelist Élise Desaulniers, author and executive director of the Montréal SPCA (Society for the Prevention of Cruelty to Animals), in order to be successful on social media, it’s imperative to find a unique voice. Too frequently, she said, book promoters talk about everything under the sun and that dilutes their own content amid the overwhelming noise online.

“A library finding a voice,” she said, “can translate to having a comic-book angle, or a strong well-being component. A unique voice allows that library to develop an expertise that is recognized and that creates value which will, in the end, attract people.”

Janie Thibault agreed and said that she encourages independent booksellers to promote themselves.

“Right now,” she said, “the door is wide open. For example, I don’t think twice about sending Billy Robinson (from independent bookseller La Librairie Verdun) a book by David Goudreault before anyone else because I know that that’s Billy’s niche. Reading Billy’s post saying how enthusiastic he is about cracking open Abattre la Bête (Shoot the Beast) is priceless to Librex as a publisher. It’s advertisement that you can’t buy.”

The panelists stressed that booksellers and librarians can amplify their work as book curators, reviewers, and stewards if they offer an authentic digital message on a consistent basis, that voice that can’t be bought. Being something of a rebel, they said, can translate into increased media clout.

And it’s a mistake, they said, to become overly fixated on expensive video equipment or writing savvy scripts. What’s really needed, they told their audience, is a smartphone and a book lover on staff who can transmit the company’s enthusiasm to consumers.

More of our coverage relative to the Salon du livre de Montréal is here: 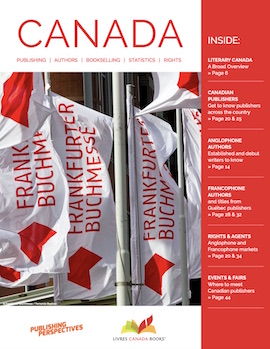 And Livres Canada Books and Publishing Perspectives are proud to bring you a comprehensive magazine about the Canadian publishing community, released to coincide with this year’s Frankfurt Book Fair.