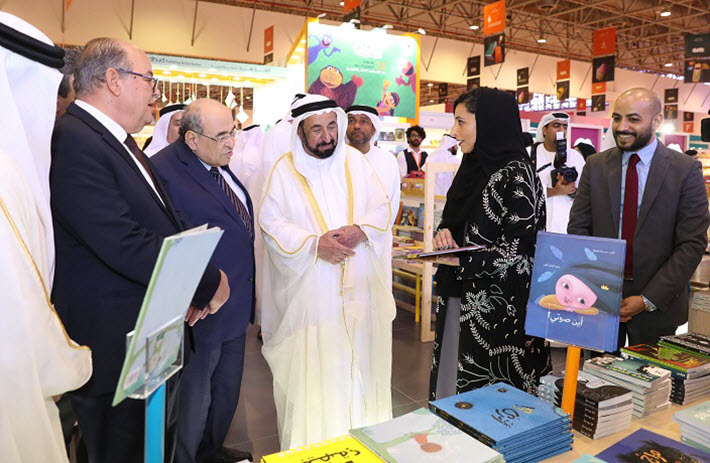 As the 11-day Sharjah International Book Fair is formally opened to the public, its chief patron warns of the importance of the ‘light’ of literature.

On the opening day of the 36th annual Sharjah International Book Fair, the Sheikh Sultan bin Mohammed Al Qasimi was joined by Muhammad Saber Arab, Egypt’s former minister of culture, in a visit to the Kalimat stand in Hall 2, to speak with the Sheikha Bodour bint Al Qasimi, Kalimat publisher and founder of the Emirates Publishers Association. Image: SIBF

The concert lighting and dramatic pyrotechnics that formally opened the 36th annual presentation of Sharjah International Book Fair‘s (SIBF) 11-day run didn’t prevent the emirate’s ruler from carefully reminding the world publishing community of contemporary threats that might be mitigated by a more robust assertion of literature’s humanizing potential.

In measured, urgent tones, the Sheikh Sultan bin Mohammed Al Qasimi spoke of “hidden hands” that work to turn “our sons’ minds” to a dreadful “darkness,” in the interpretation of simultaneous translators at Wednesday’s (November 1) opening ceremony at Sharjah’s big Expo Center.

Such politically sensitive comments weren’t made lightly, and Al Qasimi spoke without a script. His assertion that the power of a reading culture can help curb extremism and violence was delivered not only to hundreds of guests from the Arab world, but also to publishers and rights specialists from many other parts of the world. They were gathered for the conclusion of the book fair’s three-day professional program.

As provided to the press overnight, the official translation of Al Qasimi’s comments describes his remarks this way:

“Shadowy hands have been promoting malevolent ideas that darken understanding and brain-wash individuals, divesting minds of science, intellect, knowledge, culture and light, preying on our young sons and daughters.

Several times, His Highness referred to his high regard for neighboring Egypt’s stance, saying, in part, “Darkness can only be faced with the light of truthful words, science and culture and stressed the importance of Egypt and its historical role in ensuring the region’s security, standing as it does like a fortified citadel that fights destructive ideas and practices that harm the Arab world.”

Al Qasimi then awarded Sharjah’s Cultural Personality of the Year honor to Muhammad Saber Arab, Egypt’s former minister of culture, one of several countries’ dignataries on-hand for the day’s events. 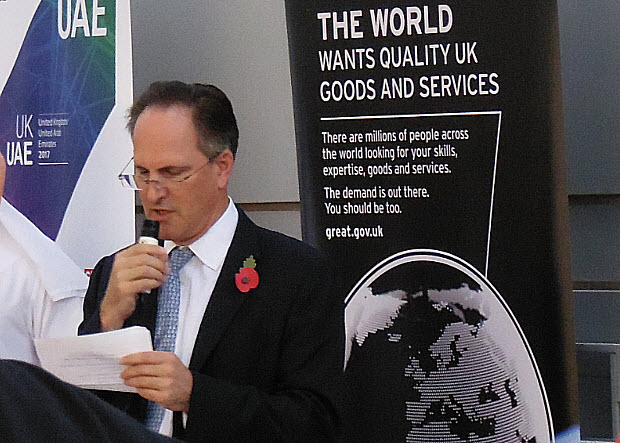 Philip Parham, the United Kingdom’s ambassador to the United Arab Emirates, speaks on opening day at Sharjah International Book Fair, where the UK is Guest of Honor this year. Image: Porter Anderson

A Royal Walkabout at the Fair

His Highness then personally handed trophies and certificates to a wide group of recipients, the fair-opening recognitions including:

Following the hour-long opening ceremony, Al Qasimi then visited many of the stands and exhibitions of the fair personally, an annual walkabout tradition that reflects the royal family’s dedication to promoting the books culture and industry of the region.

Al Qasimi and his security retinue swept briskly through the halls of the Expo Center, surrounded by wide-eyed schoolchildren, teachers, and parents who were there for the show’s first day. 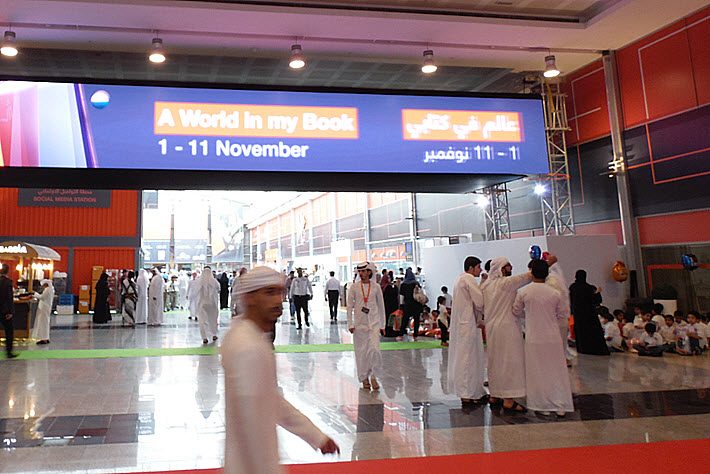 This year, it features 1,650 publishing houses from 60 countries, and is said to display more than 1.5 million books in many languages at the fair, which covers more than 14,600 square meters.

In opening comments of his own, Sharjah Book Authority’s tirelessly upbeat chairman Ahmed Al Ameri—who oversaw the opening on Monday (October 30) of Sharjah Publishing City—is quoted, saying, “Year after year, Sharjah extends its cultural message through science and knowledge, a message which this fair has established over many years, reflecting the country’s ideals and the people’s principles.”

Al Ameri told the audience that more than 620 books with 14 million words have been translated from and into Arabic as part of SIBF’s translation grant program, launched in 2011. 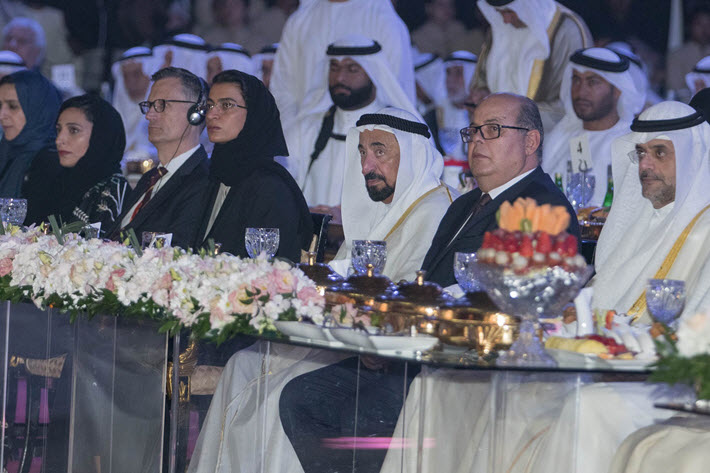