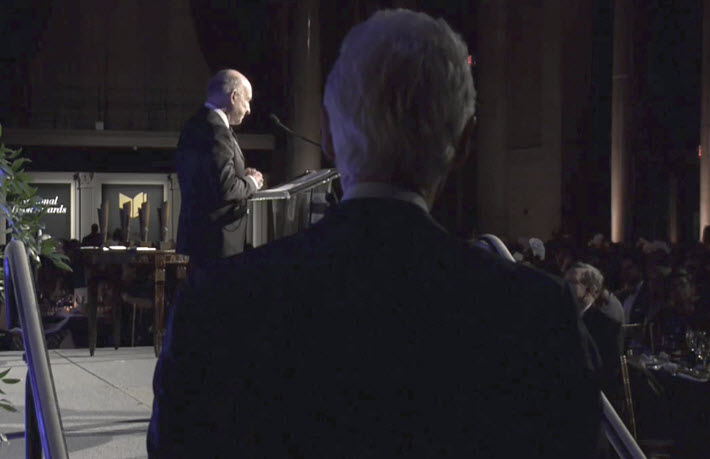 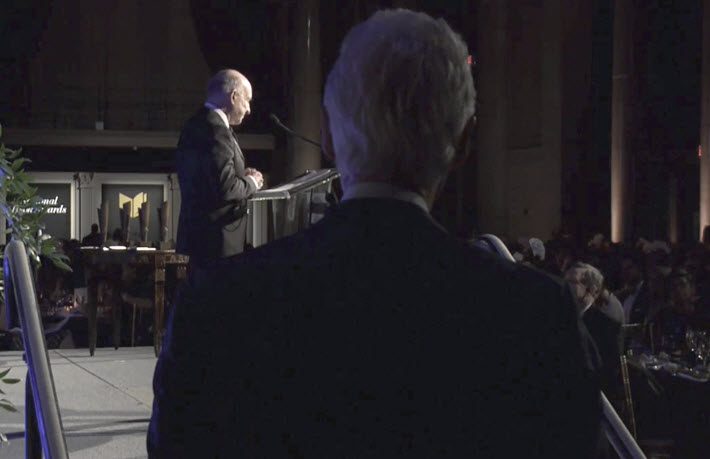 Her earlier award came in 2011 for Salvage the Bones (Bloomsbury USA).

Per the prize’s rules, only the five panelists in each of the four categories of the National Book Awards know which of the finalists is the winner prior to its announcement by the pertinent panel’s chairperson. The complete list:

In her acceptance comments, Ward clearly was moved to acknowledge the program’s abiding affirmation of her work. 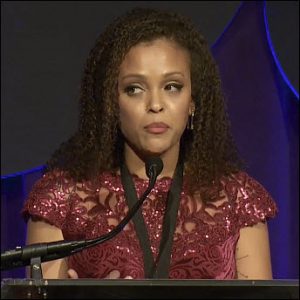 To the National Book Foundation panelists who now have selected Ward’s work twice, she then said, “You looked at me and the people I love and write about. You looked at my poor and black, my Southern children, women, and men, and you saw yourself.”

As is the tradition with the National Book Awards show, the importance of a reading culture in the United States was central to most speakers’ commentary, strongly tinged with politics in this year so wracked with the divisive dynamics of the central government. As ever, establishing independent thought through literature lay at the heart of many messages in the program.

Speaking of the formative experience she’d had thanks to her childhood access to a basement full of books at her grandparents’ home, the evenings’ host, Cindy Nixon, said, “It’s important that we perpetuate a culture that values and celebrates literature and the worlds that books are able to open to us.”

Robinson: ‘So Grateful for a Reading Award’ 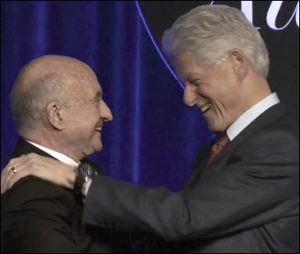 The awards evening’s most memorable moments came from the lifetime achievement awards given early in the program.

President Bill Clinton is hardly above getting off a joke while honoring the recipient of a a lifetime achievement award. Praising Scholastic chairman, president, and CEO Dick Robinson, he said, “I’m grateful to Dick for personal reasons. He sent me and Hillary copies of the Potter books so we didn’t have to wait in line at the bookstore.”

And then: “That’s one of those things that the establishment gets that’s so terrible.”

Amid the laughter, Clinton was deftly announcing Robinson as the winner of this year’s National Book Foundation Literarian Award for Outstanding Service to the American Literary Community.

Robinson was up to the mark, too, saying that he wished Clinton “hadn’t referred to my work as ‘completely charitable’ because my shareholders are always accusing me of that.”

In accepting the Literarian Award, Robinson said, “I always wanted to be a writer and to be at these book awards…I always wanted to receive a prize for a novel, and I wrote several of them—unpublished…Now I’m so grateful to you for giving me a reading award instead.”

He described his work as a teacher before his work at Scholastic, and about how he’d found children lagging in reading because the books they were assigned weren’t the right ones.

“I have personally been working on what is now called ‘diverse books,’ for more than 50 years,” Robinson said. And he argued forcefully for letting children choose their own reading material in order to develop their personal engagement with reading and literature.

The wry calm and gentle gravitas of the evening’s two lifetime achievement winners seemed to gain more traction in the evening overall than did the four category awards. That’s not to take away anything from the winners of the coveted prizes in fiction, nonfiction, poetry, and young people’s content, but a reflection of the strength of Robinson and Proulx in their respective work. 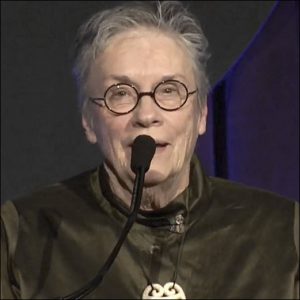 In giving the foundation’s Medal for Distinguished Contribution to American Letters to the author Annie Proulx, actress Anne Hathaway joked that her role in the film adaptation of Proulx’s Brokeback Mountain “lives in a paragraph, sort of near the end” of the original story. “They beefed me up in the movie. My hair, too.”

Proulx’s work, Hathaway said, shows us that “We tend to run from our own sadness and loneliness and fear, or as Ms. Proulx shows us in The Shipping News, what we fear, we often rage against.”

“Although this award is for lifetime achievement,” Proulx told her audience from the stage when Hathaway handed off to her, “I didn’t start writing until I was 58.”

And in the tradition of other strong artists who have received the medal—Ursula K. Le Guin’s comments in 2014 come to mind—Proulx caught the tenor of the times on Wednesday night with the dexterity that renders her work so memorable.

“We don’t live in the best of all possible worlds,” Proulx told the National Book Awards audience when the time came for her to accept the medal. “These are Kafkaesque times. The television sparkles with the images of despicable political louts and sexual harassment reports. We cannot look away from the pictures of furious elements—hurricanes and fires, from the repetitive crowd murders by gunmen burning with rage. We are made more anxious by flickering fears of nuclear war. We observe social media’s manipulation of a credulous population, a population dividing into bitter tribal cultures.

“We are living through a massive shift, from representative democracy to something called ‘viral direct democracy,’ now cascading over us in a garbage-laden tsunami of raw data.”

In the distress of such an era, Proulx positioned the author between “the hard realities and the longing for the happy ending.” Such hope is unavoidable, she said, “because there’s nothing else to do. The happy ending still beckons, and it’s in hope of grasping it that we go on.”

Proulx closed by quoting the late Polish poet and Nobel laureate Wisława Szymborska, reminding us that we’re predisposed as a species to watch for every book’s dog Fido, “gone astray in the first chapter, to turn up, barking gladly, in the last.”