At the Guadalajara Book Fair, the capital of Spain is Guest of Honor, and the rights center looks strong with 130 tables booked, 31 countries represented. 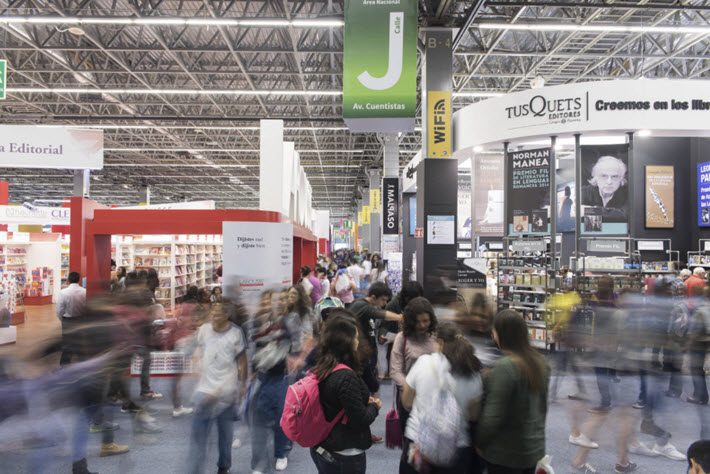 Opening at the end of November, the Guadalajara Book Fair will feature Madrid as its region of honor. And since the city was selected, Spain’s constitutional court and parliament have become embroiled in the Catalonian independence effort. The dynamics of the situation should add energy to many discussions at the book fair. —Porter Anderson

31 Countries Represented in the Rights Center

The Guadalajara International Book Fair this year expects publishers from 10 countries to participate in its rights exchange program, and the fair includes a “Seven Years of Reading” program in which the European Literature Festival will have authors present from Finland, France, Germany, Italy, Portugal, Romania, Slovenia, Spain, Sweden, and the Netherlands.

The fair’s organizers say they anticipate more than 20,000 publishing professionals to attend, and the rights center features 130 tables booked by publishers and agents from 31 countries.

The professional program this year takes place November 27 through 29. Its theme is “The Publisher: Education, Environment, and Professional Challenges.” The fair itself runs November 25 through December 3.

A set of programming for children’s and YA publishers is to include a talk by Aksel Køie, founder of the Danish publishing house Step In Books.

Italian literary agent Laura Ceccacci will give a talk on her issues in agenting today, while this year’s international publishers’ forum program includes an talk by Michael Bhaskar, British author and co-founder of Canelo.

Auster is to present the Spanish-language edition of his most recent novel, 4 3 2 1, and will be given the Carlos Fuentes medal, which is awarded to distinguished guests of the fair. The late Mexican novelist’s widow, Silvia Lemus, will confer the honor on him.

The Madrid pavilion was designed for the fair by architect Alberto Campo Baeza, and Guadalajara’s Cabañas Cultural Institute is to mount an exhibition of paintings, photographs, and collages from the 1980s by artists from the Spanish capital. Guadalajara University’s Museum of Art will be hosting an exhibition of 74 works by Spanish artist Elena Asins. 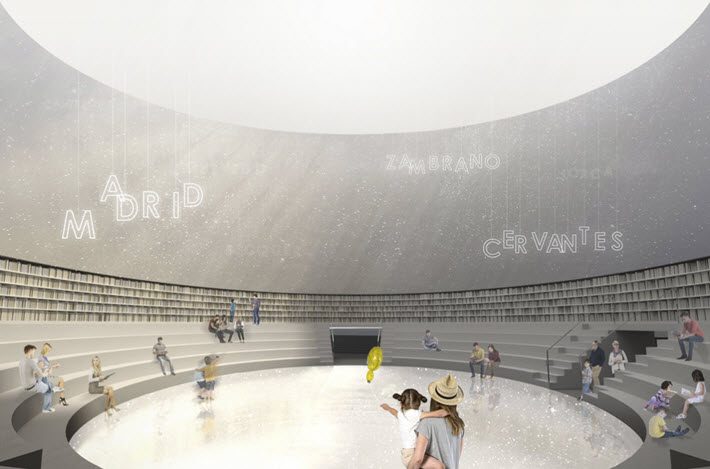 Alberto Campo Baeza’s design for the Madrid Pavilion at Guadalajara International Book Fair is centered on a cylindrical structure for presentation and interaction. Image: © FIL Guadalajara

Italian-Brazilian author Marina Colasanti is slated to receive the SM Ibero-American Children’s and YA Literature Award.

This year’s poetry salon at the fair is scheduled to be inaugurated by Romanian poet Mircea Cartarescu, with the participation of 18 poets from eight countries.

In more awards programming, Madrid-based editor Juan Casamayor of the Páginas de Espuma publishing house will receive the fair’s annual publishing merit award in recognition of his work to promote the short story.

The international short story writers’ encounter will feature a strong cohort of authors including Cristina Cerrada, Beatriz Espejo, Evelio Rosero, Mercedes Cebrián and Verónica Murguía, and this year’s fair will also feature a space dedicated to comic and graphic novels for the first time.

In terms of basic exhibitors, more than 2,000 publishing companies from 47 countries are scheduled to display work in some 100,000 square feet of space. All told, more than 400,000 books are to be shown, including the launches of at least 620 new titles. All told, the exhibition should represent the work of some 41 international markets.

The computer-assisted work of Spanish artist Elena Asins is to be featured in an exhibition during the fair at Guadalajara University Museum of Art. Image: © FIL Guadalajara