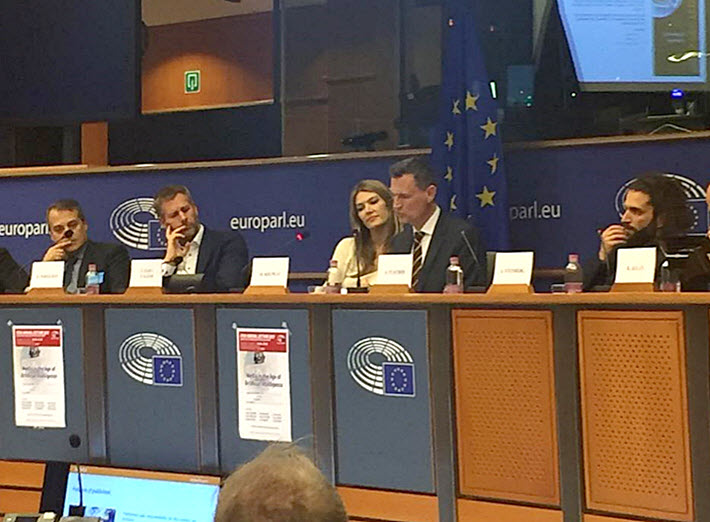 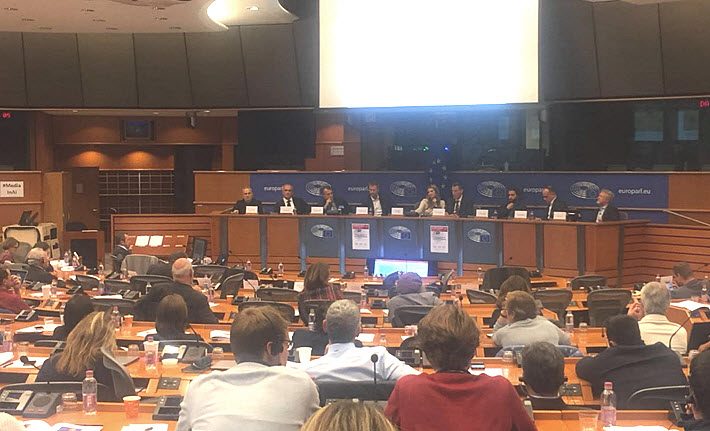 The theme of the gathering in the Altiero Spinelli building was Media in the Age of Artificial Intelligence, and the topic brought the singular character and efficacy of book publishing onto the same stage with big media and news publishing.

Joining Kolman for the event were:

With Sky’s David Wheeldon moderating, they were followed by Athens Technology Center’s Yannis Kliafas and Deutsche Welle’s Wilfried Runde with a case study, “Algorithms in Action.”

Kolman’s position in this diverse set of voices was as the day’s central representative of book and scholarly publishing, surrounded as the industry is by data-leveraging technology conglomerates. 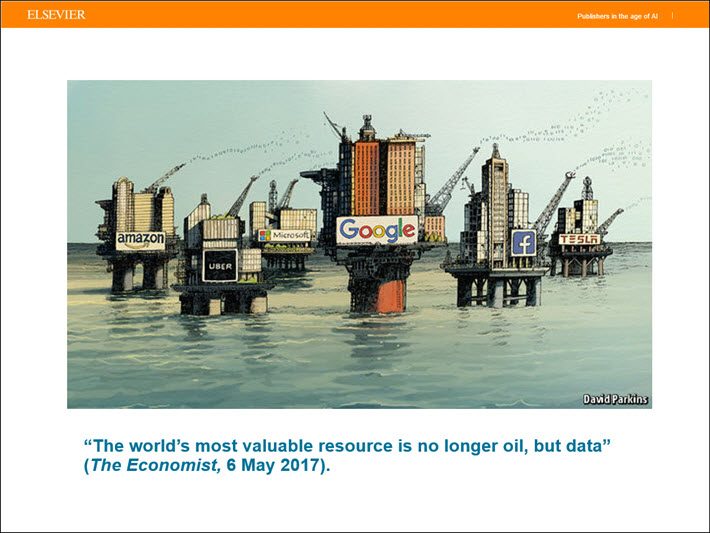 ‘We Have Become Hybrid Organizations’

Asking the rhetorical question, “What is the purpose of publishers in this new world?” Kolman told them that “Publishers have an important role to play in stopping the spread of misinformation and fake news.”

His thesis was that formal publishing protocols must stand on prescribed, formalized, mutually agreed procedures in order to ensure quality control.

“We [in book publishing] acquire content,” he said, “and in the past 20 years we have increasingly moved it to platforms online, much like a tech company. Speaking from my experience as a science publisher at Elsevier, we can guarantee that the material we produce adheres to the international standards of scholarship. It has been edited, peer-reviewed, and validated.

“In the process it has been revised and revised again to further improve the quality. Most importantly, it is carefully curated so that it remains accessible—and citable—in the future. In other words, we take responsibility for the content we produce.”

This, of course, is a tack that goes right to the heart of the tech giants’ embattled position in the info-sphere today, and Kolman was ready to be explicit about his intention here.

“AI allows us to extract the knowledge out of articles by applying, for example,  knowledge graphs. But publishers deploy machine learning and AI with strict editorial responsibility.”Michiel Kolman

“A few weeks ago,” he told delegates in Brussels, “several US lawmakers publicly released a selection of Facebook ads bought by Russian operatives who tried to sow division among American citizens. And it has been known for a while that Google search results can be manipulated, in some cases to serve an extremist political agenda.”

Nor, however, did he assert that book publishing is without its occasional missteps. “Even after strict peer review,” he said, “the occasional article will slip through and is published while it should not have been. Luckily there are strict procedures in place to deal with these articles, e.g. through a corrigendum or erratum.”

Interestingly, while book publishing in particular (academic publishing less so) is frequently assumed to be resistant to digital disruption, Kolman asserted that the industry is actively benefiting from technological advances.

“With the advent of data mining technologies in recent years and more recently machine learning and AI,” he said, “we are finally able to digest content in other ways besides reading.

“To put this differently, until now as a result of a search for information, publishers would provide a selection of documents (like articles, book chapters) and the reader would use her human intelligence to extract the knowledge out of this set of documents. AI allows us to extract the knowledge out of articles by applying, for example,  knowledge graphs. But it should be noted here that publishers deploy machine learning and AI with strict editorial responsibility.” 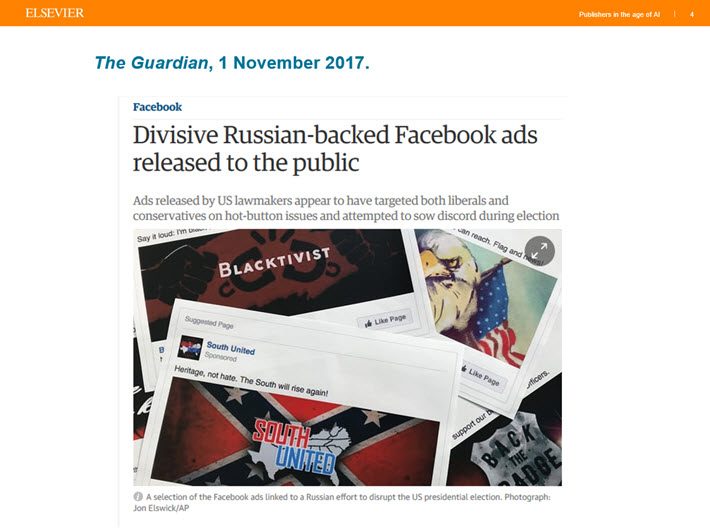 In Kolman’s commentary at the European Parliament’s STOA program, he cast legitimate publishing as a responsible player in a world of less reliable purveyors of information in the digital construct.

In terms of the scholarly work purveyed by Elsevier in particular, Kolman raised concerns from that sector, saying, “In recent years, publishers have been making more and more content available to the public, through Open Access journals and platforms, as well as through preprint servers. Improving access is an excellent development, but this shift has a dark side too. We are very concerned about scientific articles published in predatory OA journals.

“And what if a physician relies on medical information uploaded to a preprint server, a version of the article without any quality assessment whatsoever?” he asked. “And if we increasingly rely on AI algorithm, would we need a peer review process to assess these algorithms? Should there be even a level of transparency of the AI technology used? If we value the quality of our content, publishers are to proceed with care.”

“If we aim to continue to serve humanity and solve our grand challenges, we need to balance content and technology with all stakeholders.”Michiel Kolman

While noting that Europe is holding its own in top AI research institutions (30) after North America (34) and before Asia (25), Kolman added a concluding observation,  a kind of two-way street development in publishing and its relations to broader media issues of the day.

“It could be argued,” he said, “that tech companies are more and more becoming like publishers–presenting content to the public in the best way possible–while publishers are increasingly transforming into tech companies, relying on data mining and AI technologies to extract knowledge out of content.

“Rather than single-purpose companies, we, publishers and tech companies alike, have become hybrid organizations with a multipurpose agenda. If we aim to continue to serve humanity and solve our grand challenges, we need to balance content and technology with all stakeholders. That is why I call on greater collaboration between publishers and technology companies to help keep our checks and balances in place.” 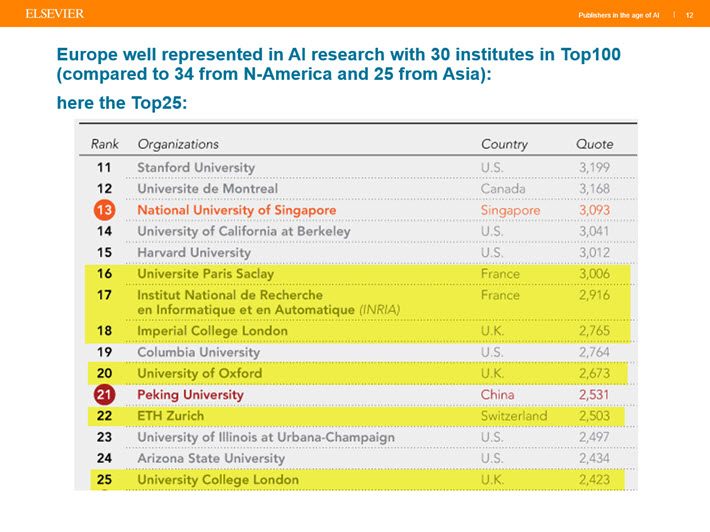