Feminism Has No Boundaries’ is the title of NYC-based Albertine Books festival this week, as Cynthia Nixon is named Naitonal Book Awards host.

Artwork from Albertine.com for the French Embassy’s Albertine Books festival ‘Feminism Has No Borders’

The Cultural Services of the French Embassy and Albertine Books, the bookshop operated by the French Embassy in New York, have announced that writers and activists Gloria Steinem and Robin Morgan are curators of the fourth annual Festival Albertine.

The title of the dialogue series this year: “Feminism Has No Boundaries.”

With its opening tonight (November 1) in New York City, the event runs through Sunday (November 5) with free events that bring together organizers, artists, writers, scholars, politicians, religious leaders and journalists “to explore the obstacles confronting women,” according to press materials, and also to “dare to dream of change and of a legitimate equality between women and men.”

Among speakers scheduled to participate:

Program details are here. Programs are expected to be streamed live here.

Book Awards To Be Streamed Again 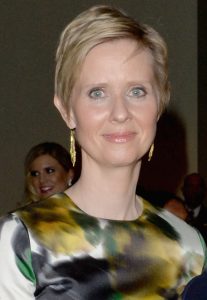 The 2017 National Book Awards program is to be hosted November 15 at New York’s Cipriani Wall Street by actor Cynthia Nixon.

Nixon, an Emmy winner for her work in Sex and the City, is also known for award attention to her film and television work on Amadeus, The Philadelphia Story, The Manhattan Project, Indiscretions, The Little Foxes, Killing Reagan, and A Quiet Passion.

The emcee role at the National Book Awards’ annual big evening is not an entirely easy assignment, set as it is in a roomful of deeply experienced publishing industry wags with well-charged devices for tweeting.

Awards announced during the course of the evening include the National Book Awards in fiction, nonfiction, poetry, and young people’s literature. The ceremony will also include the presentation of two lifetime achievement awards.

As reported earlier this month by Publishing Perspectives, each of four categories has five finalists chosen by a jury of four previous finalists and/or winners.

The awards program is to be streamed again this year, on the National Book Foundation site.