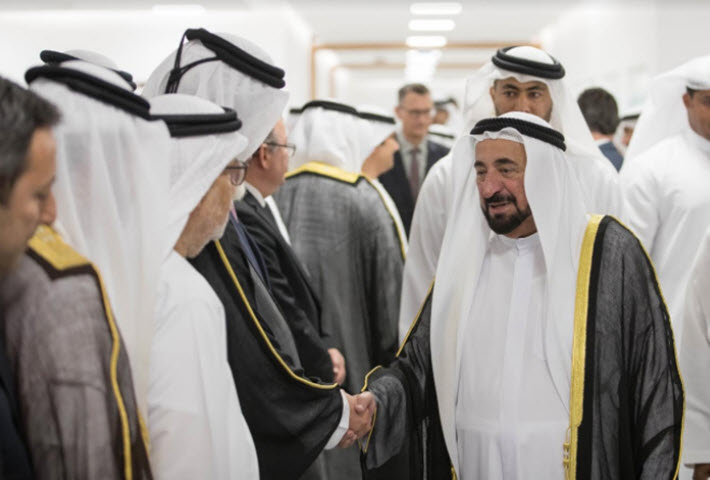 Together with an invited audience of hundreds of international publishing industry representatives, the emirate’s ruler opens Sharjah Publishing City. 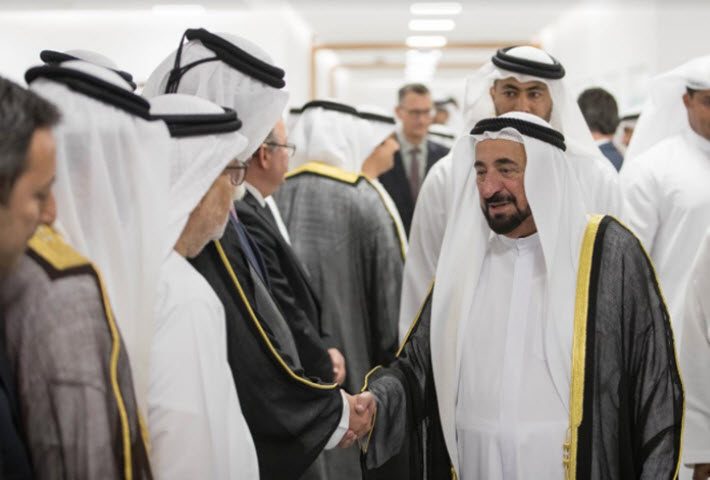 ‘A Cultural Beacon in the Region’

At a gala dinner for more than 200 international publishers and industry guests in its huge atrium, the UAE’s new Sharjah Publishing City free trade zone was dedicated Monday (October 30) in an evening led by the Sheikh Sultan bin Mohammed Al Qasimi, Sharjah’s ruler.

The Publishing City facility comprises 19,000 square meters and contains 400 individual office spaces, and is expected to become the new Middle Eastern and North African home for a range of international publishing houses, organizations and institutions, as well as publishing service vendors, distributors and printers.

In a walk through of the new complex led by lead consultant Mohamed Noor Hersi, members of the press on Monday evening were shown through the sprawling two-story structure. While office work areas and flexible-space areas form the main part of the building’s leasing inventory, there also are many strong features built into the complex that will attract commercial tenants.

For example, there’s a wing of storage spaces that publishers can use to house books and other materials without having to engage warehouse space elsewhere when needed. That area provides publishers and organizations quick access to their inventories and has a loading dock attached, as well, for ready transport.

“Sharjah Publishing City reflects our ambitions to support the publishing industry, engage with the world, and to become a cultural beacon in the region.”Sheikh Mohammed Sultan bin Al Qasimi of Sharjah

There also are retail spaces worked into the plan—an oasis-themed Caribou Coffee shop was open Monday evening—and a bookstore is to figure prominently into ground floor retail near one corner of the broad atrium.

A tastefully designed, intimate theater space is included, with seating for some 80 people and fine acoustics, while services provided to leasing companies include an on-site immigration office to handle employees’ visa needs, as part of a customer-care center to assist with family relocation issues and other resourceds, all handled in a concierge format.

A standard package for a furnished office space is being offered for some US$422 per square meter annually. Unfurnished, such a space goes for US$368. Those on-site storage spaces can be rented for US$118 annually per square meter. 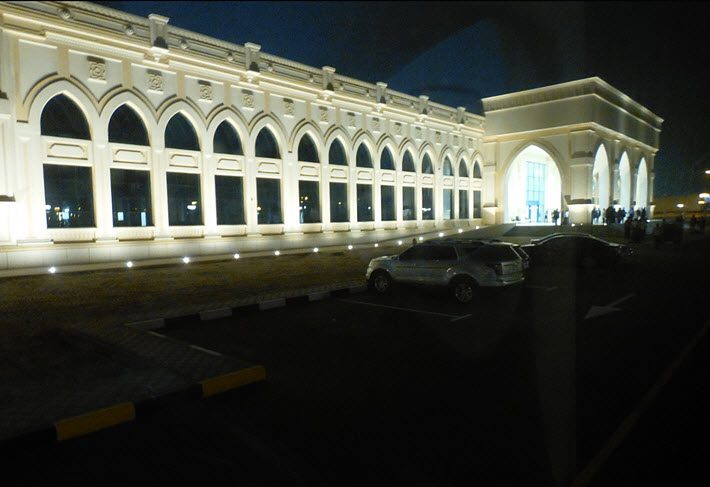 ‘The Beating Heart of Sharjah’

“The opportunity to distribute content close to these regional markets is key, since speed is always a consideration when shipping from the US or UK.”John Ingram

As covered by Publishing Perspectives, the development of the Publishing City project is led by Sharjah Book Authority chairman Ahmed Al Ameri. And while the program has been years in the making, the actual construction of the facility, roughly 20 minutes from Sharjah’s city center, has been accomplished in some 18 months.

In a prepared statement, Al Qasimi—a published author, himself—is quoted, saying, “Sharjah was recently named World Book Capital 2019 by UNESCO and the emirate is widely known as the cultural capital of the Arab world.

“But this is no coincidence. Reading and literacy are the beating heart of Sharjah, and we have launched countless initiatives designed to introduce as many people as possible to the wonder of books.

“Sharjah Publishing City reflects our ambitions to support the publishing industry, engage with the world, and to become a cultural beacon in the region.”

Last year honored with an International Excellence Award from London Book Fair and the UK’s Publishers Association, Al Qasimi is joined by his daughter, the Sheikha Bodour bint Al Qasimi, in programming a deep contemporary reading culture into the civic life of the UAE’s third-largest emirate.

The newest symbol of such steadfast effort coming to fruition, the opening of the Publishing City project, is understandably a great point of pride. 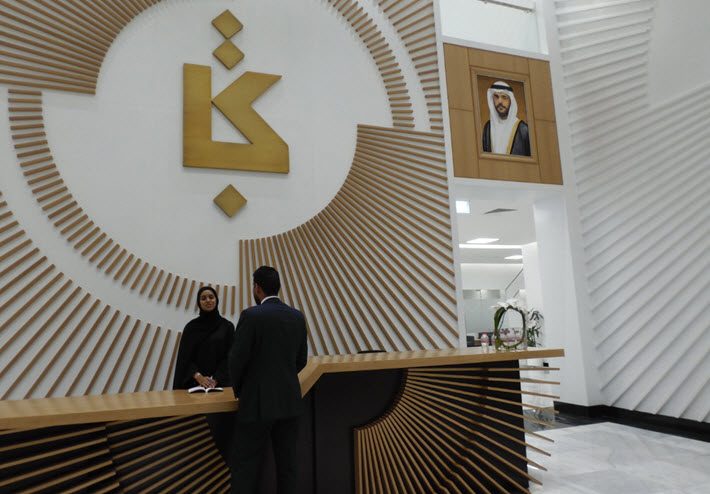 At one of the four main entryways to Sharjah Publishing City. Image: Porter Anderson

‘Positive Impact Both Locally and Globally’

“We have been overwhelmed with the response from publishers and other companies from within the publishing ecosystem.“Ahmed Al Ameri

In another prepared statement, the book authority’s Al Ameri is quoted, saying, “The launch of Sharjah Publishing City is an extremely significant development in the publishing world, one which will have a very positive impact both locally and globally.

“We have been overwhelmed with the response from publishers and other companies from within the publishing ecosystem, who are excited by Publishing City’s unique proposition and see it as the perfect vantage point to access new markets.

“I was delighted to welcome His Highness and an audience of international publishers to witness the unveiling of the facility today and I look forward to seeing what the future brings.” 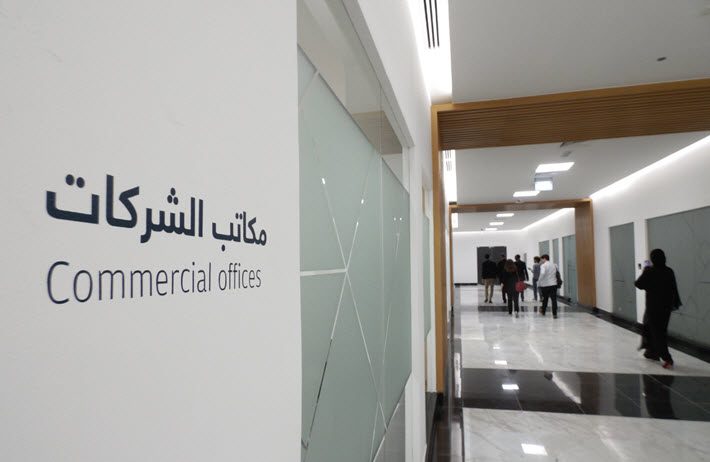 ‘To Distribute Close to These Regional Markets’

“Along with our reliable partners in Sharjah, we share the support of a global exchange and the desire to help content reach readers around the world.“Shawn Morin, Ingram Content

With print facilities on the horizon, near-term, Ingram Content—the world’s largest distributor, which depends on regional printing sites for its world network of print-on-demand production—provided a comment from chairman John Ingram, as a follow-up to news published by Publishing Perspectives and other media about talks with Publishing City.

Ingram is quoted, saying, “I have been going to the Sharjah Book Fair and the area for years and always expressed my confidence in the Sharjah Book Authority and the royal family to deliver on their commitment to the Publishing City program. The opportunity to distribute content close to these regional markets is key, since speed is always a consideration when shipping from the US or UK.”

And Ingram CEO and president Shawn Morin is quoted, as well, saying, “We are seriously considering the establishment of a Lightning Source print facility in Sharjah Publisher City. This is an opportunity to reach the Middle East, African and Asian marketplace.

“Along with our reliable partners in Sharjah, we share the support of a global exchange and the desire to help content reach readers around the world.”

India’s Repro offset printing is also reported to be in talks with Publishing City about a new base at the center, for which officials say roughly 150 companies are signed so far.

A site for Sharjah Publishing City has been created at spcfz.com 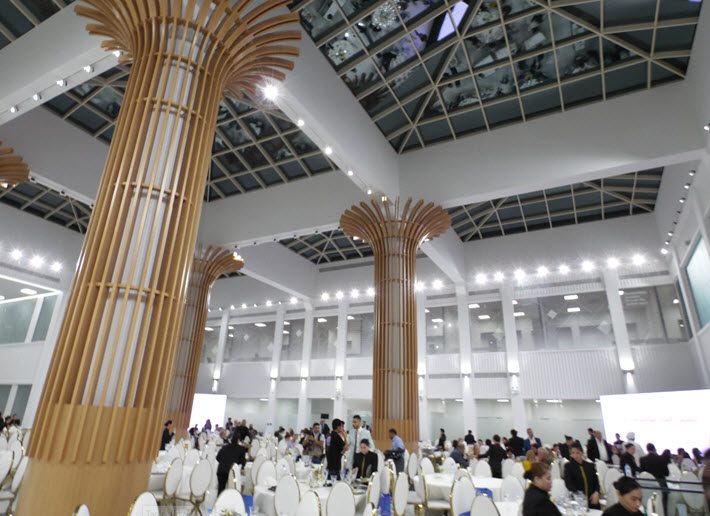