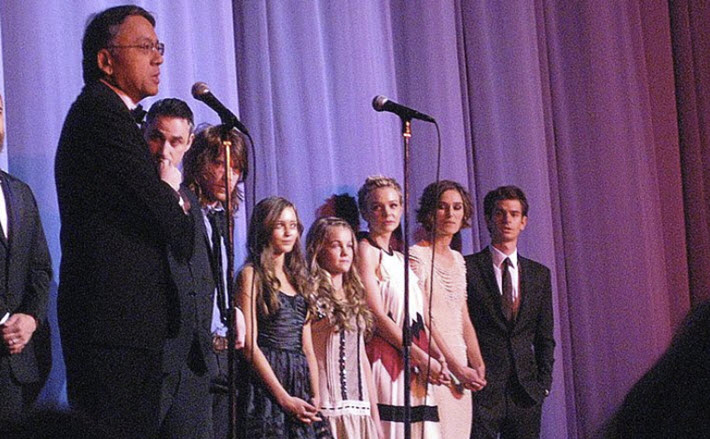 Surprise—for the author and industry—mixes with reassurance as the Swedish Academy returns to more traditional interpretations of the literature Nobel and gives the nod to Kazuo Ishiguro. 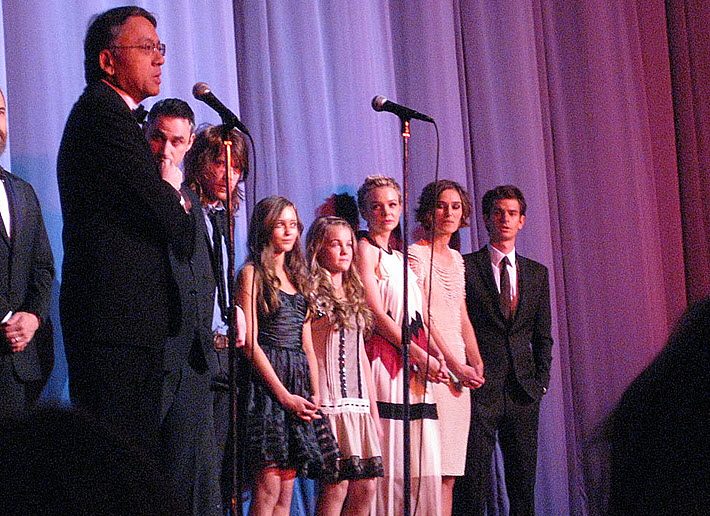 Kazuo Ishiguro speaks at the BFI Film Festival in 2010 as cast members of the film of ‘Never Let Me Go’ look on. Image: Bex Walton, CC-BY-2.0

Ishiguro: ‘I Thought It Was a Hoax’

Reactions to the news of Nagasaki-born British author Kazuo Ishiguro’s Nobel Prize for Literature, announced Thursday (October 5) have been varied and primarily positive.

Easily the most amusing response comes from the 62-year-old author, himself, who in a news conference taped near his London home and carried by The Guardian, says that “in this time of fake news,” he simply didn’t believe that he’d won.

“I thought the normal procedure is that the winner is told first,” he says, “so I didn’t believe it for a long time.” A call from his publisher helped persuade him, he says, and “when the BBC phoned, I thought it might be true.”

Publishing people might be forgiven if they were, by contrast, all too eager to believe the news. Bob Dylan’s shock win last year was received as—to quote an article in the New Republic—everything from “a farcical screw-up” to “no artist could be more deserving.” The breezes from Stockholm were chilly for publishers in 2016.

With Ishiguro’s selection, bookish people are reassured that literature hasn’t been forgotten in Sweden. This is where The New York Times‘ Dwight Garner gets it right: “This year there will not be that sort of bickering: Kazuo Ishiguro, who was born in Japan and raised in England, is a safe choice—he’s been a blue-chip literary stock for nearly four decades—but a formidable and not uninteresting one.”

That phrase “safe choice” is, of course, carefully chosen. Garner is supportive and readily admiring in some instances of Ishiguro’s work, less so in others. About Ishiguro’s The Unconsoled (1995), he writes, “That novel has its detractors, of which I am one. James Wood said it ‘invented its own category of badness.’ Even Ishiguro’s better novels have slack moments, when a certain flatness of phrase can creep in.”

And it’s worth noting that the distinguished Swedish Academy has learned to enunciate its own “breaking news” in its congratulatory 7 a.m. Eastern Daylight Time tweet:

BREAKING NEWS The 2017 #NobelPrize in Literature is awarded to the English author Kazuo Ishiguro pic.twitter.com/j9kYaeMZH6 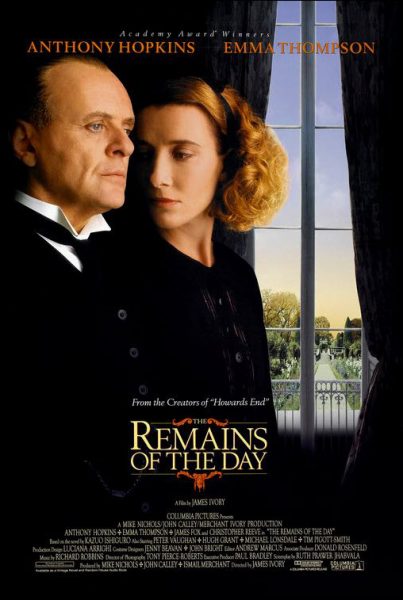 Josephine Livingstone writes in another New Republic article, “There will be articles in the coming days and weeks that will weigh [Ishiguro] up like meat on a deli scale, assessing who he is and what he means for the literary culture of our time.”

In The Bookseller, Natasha Onwuemezi and Heloise Wood have written that the staff of Faber & Faber is “absolutely delighted,” and that “a great cheer” went up at the offices of Ishiguro’s agency, Rogers, Coleridge & White.

There’s also a telling comment from Ishiguro from two years ago, when he told The Bookseller that winning the Booker Prize for Fiction in 1989 for The Remains of the Day was a relief. “I was given license to think more adventurously,” Ishiguro said then, “to think more broadly about where I wanted to go next, and to take risks. I really did want the chance to write a few books that didn’t have to be perfect.”

Ishiguro has never really been on the lists of writers who could potentially win the Nobel. Haruki Murakami is the only Japanese writer whose name usually is—and let’s be honest that was always a longshot. #NobelPrize2017

‘The Nobel Is Casting Off Its Elitist Reputation’ 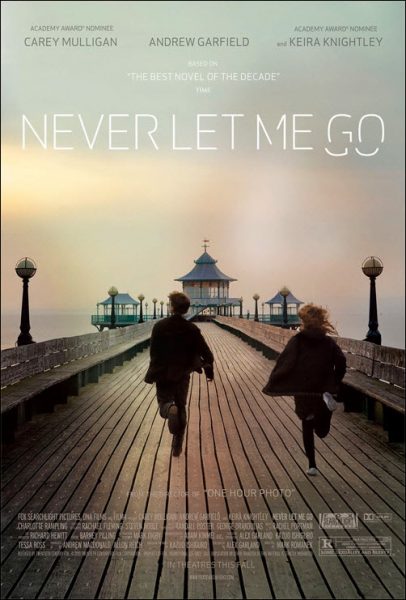 The Nobel news has released observations, anecdotes, and the sort of richly textured commentary—not all glowing, not all back-slapping—that professional critics love and star-rating consumer reviewers despise.

From James Wood at The New Yorker, we read, “A graduate of the University of East Anglia’s creative-writing school, where he was a student of Angela Carter, [Ishiguro] may well be the first product of a creative-writing course to win the Nobel.”

Wood goes on to despair of the 2015 The Buried Giant as “an allegory at once too literal and too vague.” But about the 2005 Never Let Me Go, Wood is all but giddy, calling it “one of the central novels of our age, in part because Ishiguro perfectly mixes realism and dystopian fantasy to produce an allegory of deep and lingering power.”

At home base in the UK, The Guardian is over the moon, naturally: “It is because he writes for all times,” rhapsodizes John Mullan, “using such carefully controlled means, rigorous yet utterly original, that Ishiguro is such a worthy winner.”

Mullan gets off a fist pump on the point that Ishiguro “was not on the list of bookies’ favorites being touted in the press,” and also points out that the Swedish Academy’s mandate in the Nobel for Literature is to award “the most outstanding work in an ideal direction.”

However faithful that translation might be, it does indicate something of the academy voters’ thinking: many commentators are hailing Ishiguro’s fidelity to his themes.

Michiko Kakutani, whom many of us wish still was chief book critic for The New York Times, helpfully points us toward her reviews of Never Let Me Go and The Remains of the Day.

About Never Let Me Go, she writes in 2005, “Like the author’s last novel (When We Were Orphans), Never Let Me Go is marred by a slapdash, explanatory ending that recalls the stilted, tie-up-all-the loose-ends conclusion of Hitchcock’s Psycho. The remainder of the book, however, is a Gothic tour de force that showcases the same gifts that made Mr. Ishiguro’s 1989 novel, The Remains of the Day, such a cogent performance.”

And about The Remains of the Day, she writes in 1989, “Mr. Ishiguro is able to create a portrait of the man [Stevens] that is uncompromisingly tough, and at the same time elegiac. He shows us the consequences of both emotional repression and misplaced loyalty, the costs of blindly holding onto values formed by another age. The result is an intricate and dazzling novel.”

Again at the Times, Alexandra Alter and Dan Bilefsky write that Ishiguro has sold 2.5 million copies of his novels in the States. Wood and Onwuemezi tell us that in the UK, he’s sold 1.67 million copies through Nielsen BookScan’s Total Consumer Market gauge.

Alter and Bilefsky report that Ishiguro is the 29th English-language author to win the prize and has the rare distinction of being commercially successful.

In a new piece at the New Republic, Alex Shephard sees a trend that connects Ishiguro, Dylan and the 2015 laureate, poet Svetlana Alexievich: “The Nobel is casting off its elitist reputation…It’s heartening to see a 116-year-old prize reinvent itself. This is a good development if kept in moderation…The danger is that the Nobel will lose its most important function, which is to dispassionately select the best writers from across the globe.”

And it’s important to listen again to Ishiguro, himself, from that park-bench news conference video, to get a sense for what the artist would like us to make of the recognition that Sweden has bestowed on him:

“I hope that some of the themes I’ve tried to tackle in my work about history, about not just personal memory but about how countries and nations and communities remember their past–and how often they bury the uncomfortable memories from the past–I hope that these kinds of themes will actually be in some small way helpful to the climate we have at the moment because we’ve entered a very uncertain time in the world.”