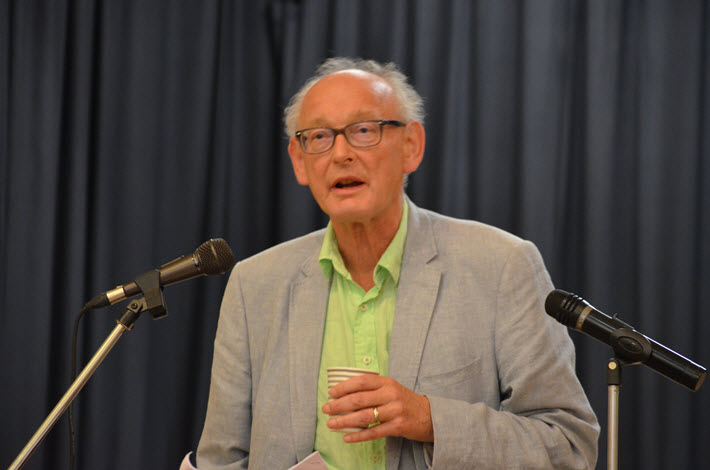 In humor and praise, the former director of marketing and communications with Nielsen Book was remembered in London as someone ‘who always saw the bigger picture.’

Siewcharran died in June, aged 59, in a respiratory failure while on holiday in Greece with her husband John Seaton, head of inventory at Canongate. 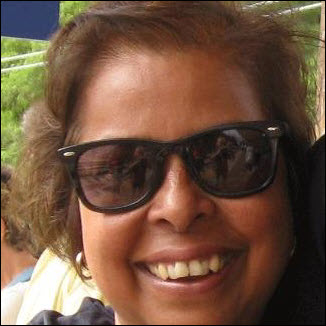 Although Siewcharran wasn’t someone who necessarily made headlines, the effect she had on those who worked with her was evident by the breadth of the industry represented in the congregation. Siewcharran had been instrumental as a behind-the-scenes figure, tirelessly making sure everything ran smoothly at conferences and book fairs.

Prior to working with Book Data, near the site of Friday’s memorial, and then with Nielsen when it merged with Book Data, Siewcharran worked at Penguin, where she met Seaton.

The service was something of a Penguin reunion: here were White Fox’s John Bond; Octopus deputy CEO Andrew Welham; consultant Alastair Rolfe; Hachette communications director Clare Harington; agent Clare Alexander; and Profile’s Andrew Franklin. All of them knew Siewcharran when they worked for companies under the Penguin umbrella.

Tim Godfray, chief executive of the Bookseller’s Association, and David Hicks of the Book Trade Benevolent Society, where there, having known Siewcharran as a faithful supporter.

Francis Bennett, co-founder and managing director of Book Data, remembered her as “a joy to work with. Her death,” he said, “leaves us all diminished. She was a force for good taken from us too soon.”

“She promoted books and reading and always saw the bigger picture,” Breedt said. “I hope we can all carry on in that spirit.”

Although this was obviously a sad occasion with many tears, Seaton is one of the industry’s funniest speakers. Not only is he straight out of PG Wodehouse, both in manner and vocabulary, but he also said in one of his two addresses that Wodehouse was a favorite writer for both him and his late wife.

He read from Wodehouse’s Summer Lightning (Doubleday, 1929), from a worn Penguin paperback edition. He chose the opening passage, “Trouble Brewing at Blandings,” in which Clarence, ninth Earl of Emsworth, is sipping something cool “in the shade of a laurel bush” on the grounds of Blandings Castle.

Seaton read: “At this moment, the laurel bush, which had hitherto not spoken, said ‘Psst!’’”

Seaton looked up, smiled and said: “That must surely be the most sublime use of the word ‘hitherto’ in the English language.”

In other remarks, he said that Siewcharran went into a coma after her collapse in Greece, “but the staff at the hospital said she can still hear you, so you should talk to her. So that’s what I did. I talked to her, and talked and talked. I talked about all the holidays we had been on.

His commentary was lovely, self-deprecating stuff, and had the congregation laughing through tears.

Seaton did mention his and Siewcharran’s holiday to Norway, which he said gave rise to “‘the Bergen joke,’ which Mo got rather tired of me telling. But if you’ll allow me, here it is one last time.

“There were two tourists on holiday in Bergen who arrived on a Friday in pouring rain. They woke up on Saturday morning and it was still raining; and they woke up on Sunday and it was pouring with rain again. On Monday, it was still raining. They left their hotel, in the rain, and saw a young lad on other side of the road. They approached him and said, ‘Please, can you tell us. Does it rain here all the time?’ And the boy replied, ‘I don’t know. I’m only 12 years old.'”

Seaton finished by saying, “My darling Mo. I am a much, much better person for you having been in my life.”