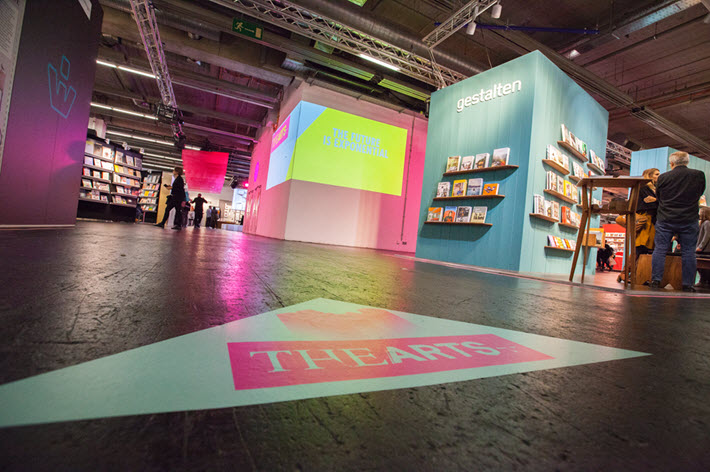 ‘How does your marketing have to change,’ asks Maks Giordano, when the exponential growth of apps and web content takes attention away from books? 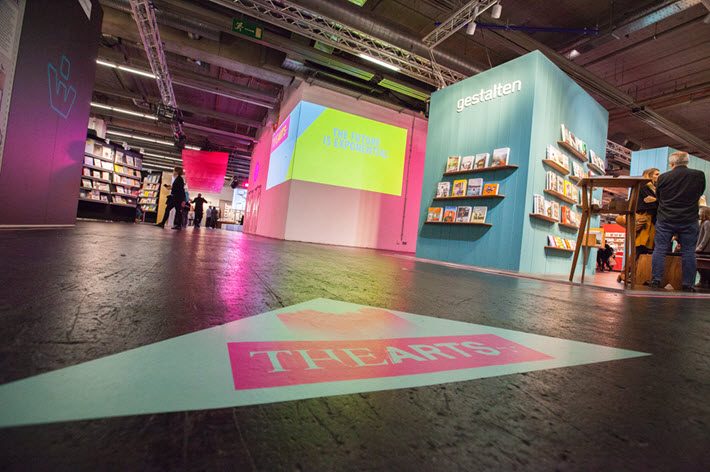 Functioning almost as a show-within-a-show, the second annual THE ARTS+ program at Frankfurt Book Fair focused, in particular but not exclusively, on robotics and virtual reality within the creative industries.

In addition to 54 exhibitors in THE ARTS+ area, some 120 speakers from nearly 20 nations were heard on two stages. Their topics invariably addressed aspects of cultural and technological connection, correlation, and sometimes collision. And if anything, these experts’ observations were just as invariably varied in their approaches, both analytical and artistic.

While many of us today celebrate the range and reach that Frankfurt’s Holger Volland and Britta Friedrich and Europeana’s Jill Cousins can bring to bear on a program of this kind, there’s always a moment in which even the best of the culturati and technophiles wonder if things aren’t moving too fast.

And when it comes to marketing and what publishing needs to consider, says Maks Giordano, don’t slow down. 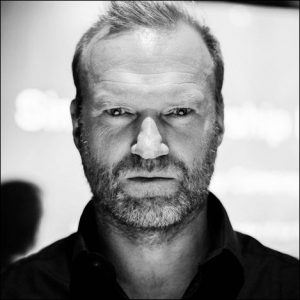 Publishing Perspectives had a chance to talk with one of the marquis speakers of THE ARTS+, the managing director and co-founder of Bonn- and Berlin-based Kreait. Giordano, whose insights come from more than 23 years as a digital strategist, arrives with a term for book publishing today: hyperinnovation.

“If you work in digital for a long time,” Giordano says, “it starts so slowly. One, two, four, eight, sixteen. But once it gets into an exponential curve, 30 steps adds up to a billion.”

He’s talking about the surprise effect of scale and exponential growth in the digital space. The amplification of digital channels creates a vastly bigger capacity for multiplication. In fact, he says, “I had mobile projects already in the early 2000’s for publishers” before there were many people who would download them. When the iPhone hit the market, he says, the pace changed completely. That “iPhone moment” suddenly enabled the growth of mobile content at a new level of growth, needless to say.

“In 2007, the iPhone came,” he says. “In 2008, the App Store came. Then apps like Google Maps and Candy Crush, all of a sudden, were there, as factors that were accelerating each other. You had flat rates from your mobile operator. You had mobile bandwidth.

“It’s really an exponential curve now,” Giordano says. “Currently there are 158 billion-dollar ‘unicorns’ on the planet,” he says, referring to startup companies that attain a valuation of US$1 billion in the tech sector.

“People need to be aware,” he says, “that now with these flat rates and app stores and iPhones and millennials, I’m strongly convinced that here in 2017, we’re on this curve. Now innovation can have super-acceleration, and that’s what I mean by hyperinnovation.”

This is what can give Airbnb, he says, a market valuation higher than that of many hotel chains. The word-of-mouth dynamics of a digitally connected community triggers not linear but exponential growth.

And it’s up to publishers today, Giordano says, to start by coming to terms with the realities of exponential growth and then to embrace and engage in the hyperinnovative possibilities. 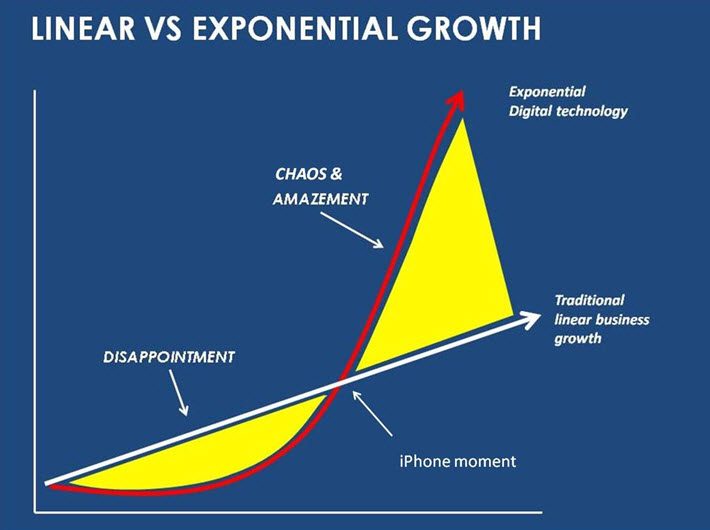 ‘Publishing Is About Brand as Your Ambassador’

“I’m strongly convinced that here in 2017, we’re on this curve. Now innovation can have super-acceleration, and that’s what I mean by hyperinnovation.”Maks Giordano

“How does your marketing have to change?” he asks, amid short attention spans, fake news, and a plethora of content.

“First, we have to acknowledge,” he says, “that millennials are there” as a major part of the most desirable demographic today. “They’re glued to their iPhones, and the concept of linear TV is over for them. A 30-second ad at 8:15 is over for them.”

Step Two, he says, is to acknowledge the supremacy of quality. “It’s all quickly written, quickly researched, no fact-check. I’m a big, big fan of brands these days.

“Publishing is about brand as your ambassador. A publishing brand in Germany has become important in journalism, and the same goes for books. With self-publishing, everyone can be a publisher in this environment. So as a publishing house, you need to stick it out” and stress the quality that trade publishing brings to the table.

The question of trade publishing’s typical speed to market, however, is a particular challenge, Giordano says. In expert nonfiction today, he says, by the time a book has been edited and prepared for release, “There are 20 articles on the Web” about the topic by competing specialists. What’s posted online may be of quality, too, at times and can present a real difficulty for a relatively slow-moving book publisher.

“The need is not to make the author go faster,” he says, “but to speed up the process internally at a publishing house.” Otherwise, “do I want to publish an ‘old book'” that’s outpaced by the surrounding chatter online before it comes to market?

The answer, he says, is to learn from the example of startups that may work out of garages but are able to move quickly because they’re basically replicating the Eric Ries model of “lean” development.

“They’re forced to do things differently,” he says. ‘They create the ‘minimal viable product,’ the MVP. They know they’ll run out of money if they take the time to build a ‘perfect’ product. But in this environment, it’s not about being perfect but being agile, fast, being out there to test the waters. See if people like it, don’t like it.” 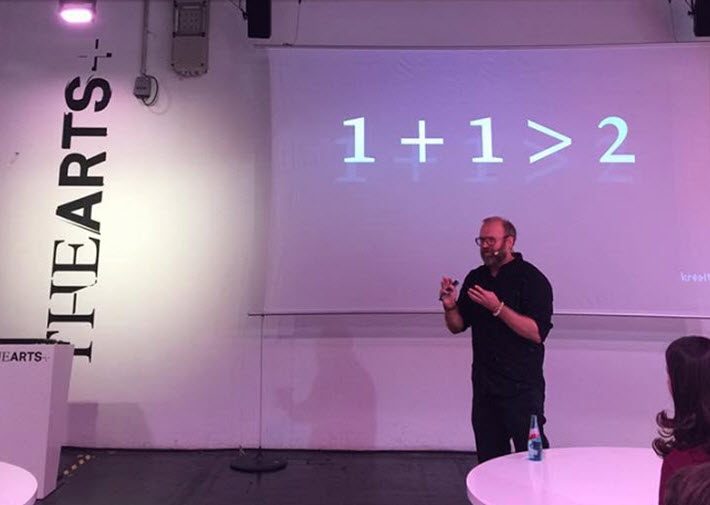 ‘Absolutely, You Must Focus on the Customer’

“The new thinking should be, ‘Let’s talk to readers. How can we reach them? What do they expect?'”Maks Giordano

Giordano recognizes the quality vs. speed debate to be difficult for many parts of trade publishing, many houses are struggling with this. But where publishing is learning to embrace digital marketing, he says, is in the use of data-driven guidance for development of what the consumer base wants.

“Amazon, Uber, Airbnb,” he says, “are all examples of what data-driven companies can do to use data on an hourly basis. These companies make data-driven decisions, not based on assumptions but on observations.

“And user-centricity is my next point. Absolutely, you must focus on the customer. Many companies I talk to say, ‘Yes, but we’ve been doing that for the last 100 years.’ But no, they haven’t.

“Yesterday, I had a long layover between flights, and I was sitting there in the airport lounge and I realized that the lounge looked nice but it was the total opposite of what the traveler needs,” geared, perhaps, he says, more to a leisure mentality of service and accommodation than the set of workaday needs that a business traveler might have.

“So if I’m Lufthansa,” he says, “I want to spend time in the lounge, speak to frequent travelers, ask their opinion, do a co-creation workshop, then try to create the best lounge concept that, in 2017, includes USB chargers all over, power sockets all over, standing desks: this is customer orientation.”

“Use MVP thinking. Don’t spend $100,000 on Snapchat. Try something locally, see if it works. Did people like it, how did they react?”Maks Giordano

And what is customer orientation for readers, for publishing’s frequent flyers?

Giordano’s work as a digital strategist and consultant approaches publishing from outside its core. He has worked with, sometimes mentoring, such companies as Red Bull, Daimler, eBay, Munich Re, Lufthansa, Deutsche Telekom. But he’s sensitive to how publishing needs to widen and accelerate its approach to a consumer- and data-driven environment.

“We have to acknowledge that, coming back to publishing, you have a new book, you want to try reaching millennial readers over Snapchat. The old thinking would be, ‘Let’s hire a consultancy,’ get an agency, have an agency pitch, do a proposal. Maybe half a year later, they have something. In 2017, that doesn’t work anymore.

“The new thinking should be, ‘Let’s talk to readers. How can we reach them? What do they expect?

“There’s a new Dan Brown book out,” he says, referring to Origin, the new release, in Germany from Bastei Lübbe. You can think of many ways to advertise for a Brown book because it’s always cool topics. But use MVP thinking.

“Don’t spend $100,000 on Snapchat. Try something locally, see if it works. Did people like it, how did they react? Improve it, if it works, roll it out nationally. If Instagram worked better, cool, use Instagram. Did a podcast with Brown have the biggest impact on iTunes? Try it out with other authors. If not, let’s try something with YouTube influencers.” 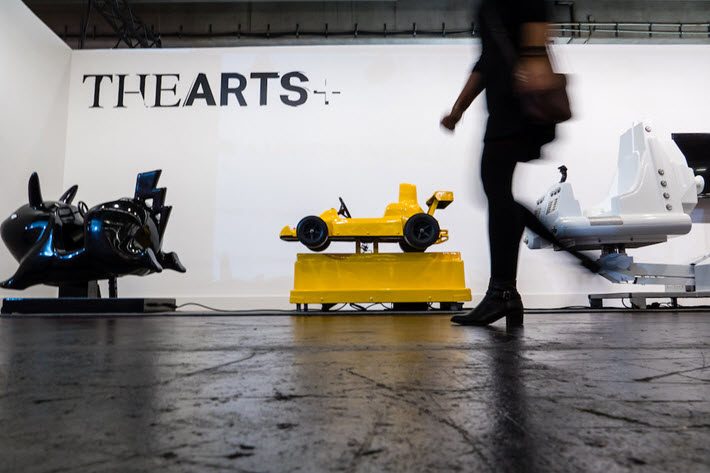 ‘Doing Nothing Is Not an Option’

“Social is real. Mobile is real. Millennials are real. These things have an effect on each other, they accelerate each other. So that leads to this exponential disruption” of a market.Maks Giordano

Some of this is already happening among small and large publishing housers. Much more can be done, however, Giordano says, if publishing can release its concepts of tried-and-true traditions, be willing to engage at ground level with the readership, and use the trial-and-error iterative process of a “minimal viable product” in terms of marketing approaches to generate response from consumers rather than assumptions about them.

“This is what’s happening in 2017,” he says. “Social is real. Mobile is real. Millennials are real. These things have an effect on each other, they accelerate each other. So that leads to this exponential disruption” of a market.

“Doing nothing is not an option. It was an option a few years ago. Before the iPhone, it was a super-valid option to just wait on mobile. ‘Let’s see if people read on mobile phones. Do they download apps?’

“Now, waiting is not an option.

“So look at startups. Learn from them, from their concepts of MVP” and their capabilities in terms of speed-to-market.

“Start with exponential change,” says Maks Giordano. And then respond. “With hyperinnovation.” 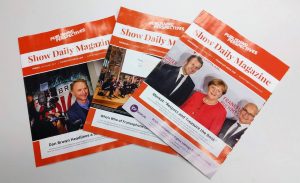 A version of this story ran in our Thursday (October 12) Publishing Perspectives Show Daily at Frankfurt Book Fair.

You can download all of our Frankfurt Show Daily magazines here.