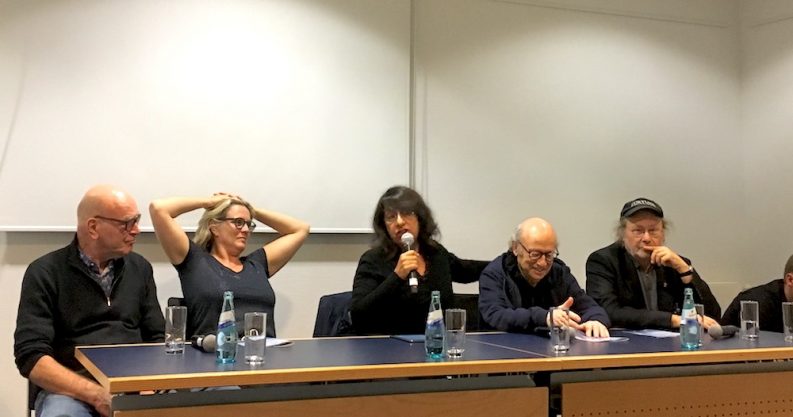 During a full-day event in Frankfurt dedicated to film adaptations of books, a group of directors, writers and producers discussed the adaptation process. 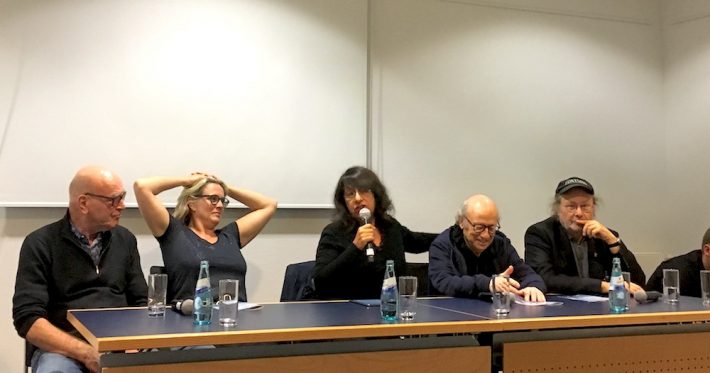 A panel of producers, directors, and writers discussed adapting books to film at the Frankfurt Book Fair. (Photo: Olivia Snaije)

Well-known German and Dutch film directors, screenwriters, authors, and producers gathered for an Industry Talk on Thursday that focused on the complex relationship between these entities, and the challenge of adapting books to film.

For Tamara Bos, adapting a book to a film is about “respecting the original story so that you have a sense of the novel. Why just take the title of a book and not respect the novel itself? Sometimes you have to make smart changes because film is a different medium.”

How writers react to adaptations of their books “depends on the novelist and whether they know and love film.”

Her father added, “Sometimes a writer doesn’t understand what a film is. He sees it as his film, but doesn’t realize other people worked on it. You can always talk with screenwriters because they know, but with novelists it’s not always easy. Sometimes you have to be careful, and sometimes it can be a bit brutal.”

Michel Bergmann took a pragmatic approach: “If you’re a novelist and give up your rights, then they can do what they want with the film. Sometimes it’s good, but mostly it’s not so good.”
Tamara Bos agreed. “If you really love something, you shouldn’t let it go.”

As a director who deals with writers, Frans Weisz, who has adapted books by Dutch author Harry Mulisch, for example, recalls Mulisch saying to him that his job was to write the book and Weisz’s to make the movie. Mulisch hoped the movie would not be better than the book, but as long as his characters were respected and kept alive, that was what was important to him.

“I really want to find the essence and soul of the book—this is what it’s all about,” said Weisz.

Burny Bos explained why he had started to adapt novels to film, since it’s more complicated legally, and more expensive. He wanted to compete with Disney but didn’t have the budget for marketing. He decided to adapt books by famous children’s book author Annie M.G. Schmidt. Today, however, he finds that stories are “not very intellectual. Children don’t read books anymore, so we buy fewer rights and try to develop our own films.”

The problem for Dutch films today remains the lack of finances for marketing. All participants agreed that competing with US marketing was simply impossible due to lack of funding. Partnerships with publishers are difficult too because they are not used to the kind of budget needed for film.

Bergmann added that it was difficult for publishers to spend money on “something that is not tangible.”

As far as advice for writers, producers, or publishers, Tamara Bos said, “If you want to write, sit down and write. If you want to be a director, it’s much more difficult. The biggest mistake I made when I was younger was to say ‘yes’ to projects I didn’t feel were good.”