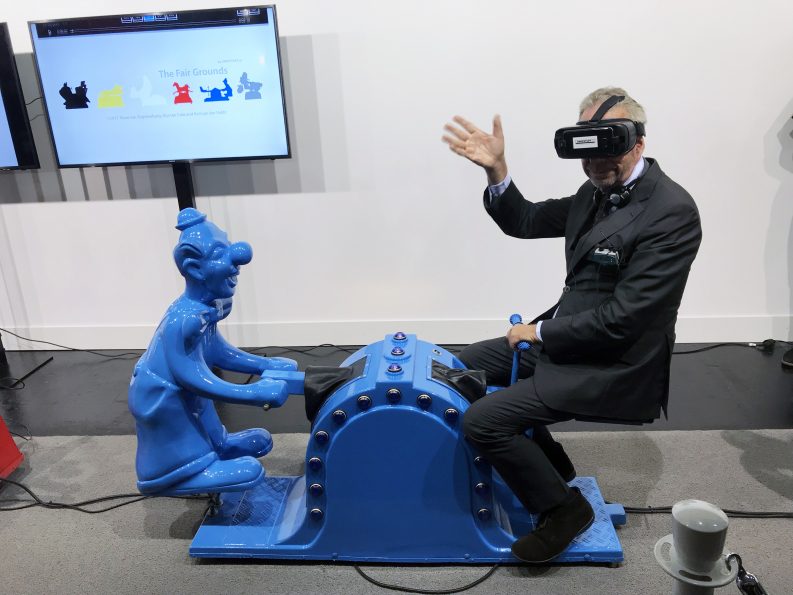 In the ARTS+ area of the Frankfurt Book Fair, artificial intelligence and virtual reality collided with arts and culture to explore new ways of doing business and providing engaging experiences. 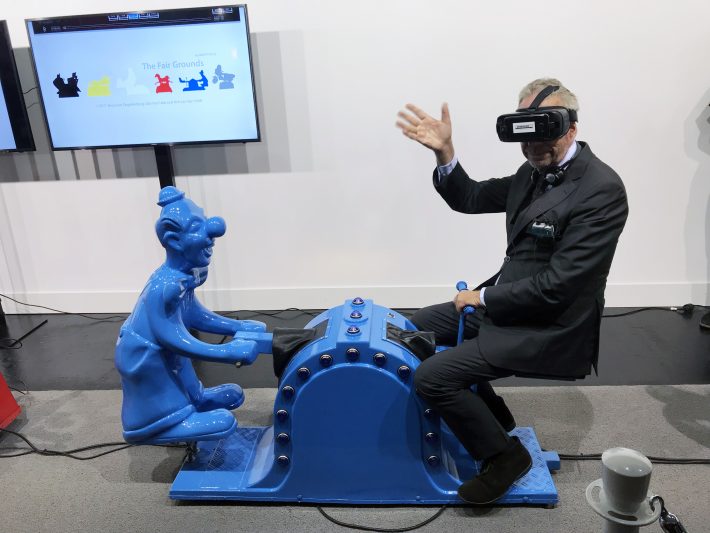 By Alastair Horne and Mark Piesing

This year’s ARTS+ exhibitors bring culture and technology together in unexpected and fascinating ways. Each has built a business based on creativity, whether that’s innovation labs, university departments, or a conference for innovators in the museum world.

Art museums are well represented; both the Van Gogh and Munch museums are showcasing their use of new technologies in exciting ways to change how people experience their collections. Norway’s Munch Museum will open a virtual museum in 2019. Holland’s Van Gogh Museum offers attendees the chance to take a picture of themselves within one of the artist’s paintings, a playful way to generate an experience that will outlast the visit.

Another Dutch organization, DropStuff, is exhibiting interactive artwork that incorporates virtual reality and fairground rides. The “Fair Grounds” premiered at the Venice Bienniale and offers participants the opportunity to take a climb onboard a fairground ride and take a high-speed, virtual tour through Amsterdam and Venice.

Two projects particularly catch the eye. Artrendex brings Artificial Intelligence (AI) that has learned what makes a work of art successful. Developed by Artrendex founder Dr. Ahmed Elgammal, the AI was trained with a combination of contemporary works and data on how successful those works were in the art market. It then generated several works of its own—with no human intervention—and these were exhibited alongside conventional artist-created artworks. Asked which they preferred, the audience tended to choose the artificial ones.

Google Arts and Culture partners with more than 1,500 institutions and organizations across 60 countries to bring Google’s technology and expertise into combination with their cultural knowledge to produce experiences such as We Wear Culture. This collaboration with 180 museums worldwide explores the stories behind what we wear—from famous fashion designers to fashion movements, from Versailles to Tokyo, and beyond.

Of the 400 or so stories shared by the project, the virtual reality recreation of the world behind Coco Chanel’s little black dress is on display in Frankfurt. Developed in partnership with Les Arts Décoratifs in Paris, the story offers the viewer the opportunity to move around in a 360-degree reconstruction of Chanel’s world superimposed over the top of the museum space.

A newly developed, ultra-high-resolution camera also allows viewers to see extreme close-ups of textiles in the museum’s collections, in far more detail than would be possible while visiting the museum itself. 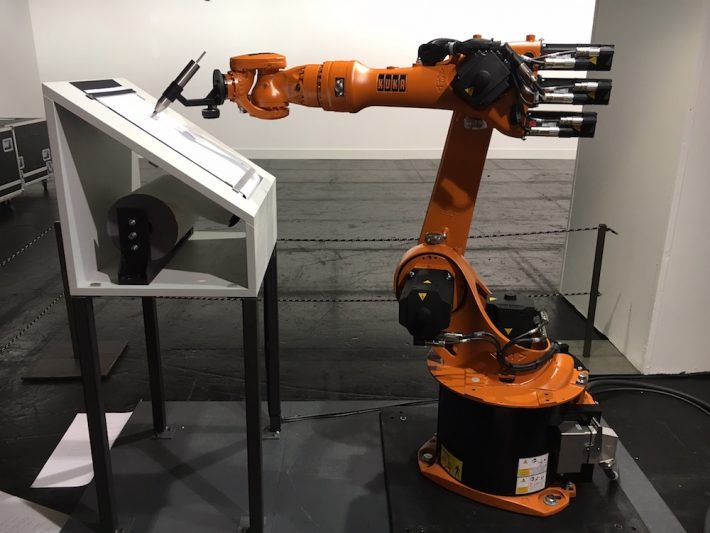 An installation from robotlab, this robot writes unique ‘manifestos.’

“Some roadies were passing when we were installing the robot and asked us, ‘What is it doing? Is it reading? Is it writing?’ ” says Matthias Gommel, a member of the German robotic artist group robotlab, associated with the ZKM Center for Art and Media in Karlsruhe. “Then they said, ‘Well, this is one more job that we don’t have to do ourselves.’”

Robotlab is an artist group founded in 2000. It explores the relationship between humans and machines through robot installations and performances.

Gommel and his fellow artists chose to use industrial robots rather than a more humanoid robot like the replicants in Blade Runner because they are by far the most common type of robot in the world. “There are several million of them hidden behind factory walls, and most people have no idea what it’s like to stand next to such a machine,” says Matthias Gommel.

Now in the ARTS+ area of the Frankfurt Book Fair, you can see one of robotlab’s installations for yourself. But instead of doing something like assemble cars, this industrial robot writes eight-sentence manifestos.

It writes sentences like “Experience is related to grammar like history to shape” or “There are two types of readers, those using differences and those using sounds.” It’s hard to tell if they are nonsense—or profound.

“In the manifesto installation,” Gommel says, “the robot writes a unique message on each sheet of paper. The robot has an archive of sentences and terms that an algorithm combines to create random sentences.

“We have been working with KUKA industrial robots for seventeen years,” says Gommel. “However, we began by researching the issues of robots. What are their capabilities and their limitations?

“Then we started doing public labs, where researchers and specialists from different fields could give us their perspective on how robots function.”

But for Gommel and the robotlab team, it’s also important to study how humans interact with their robot installations.

They are interested in “presenting robots as protagonists in their own story. They stand on their own. We don’t explain them. We don’t stand by them. They just do their production.
“In our installations, robots are placed in roles that are usually reserved for humans—roles that involve creativity, inspiration, art, and culture.”

People’s reactions vary a great deal when they see the robot.

“They are initially attracted by the idea that the robot moves like there is some life or intelligence behind it. Then they become curious when they see what the robot has created.

“In the end, I like the idea that people can take the manifestos home with them to interfere—in a way—with their everyday life.”