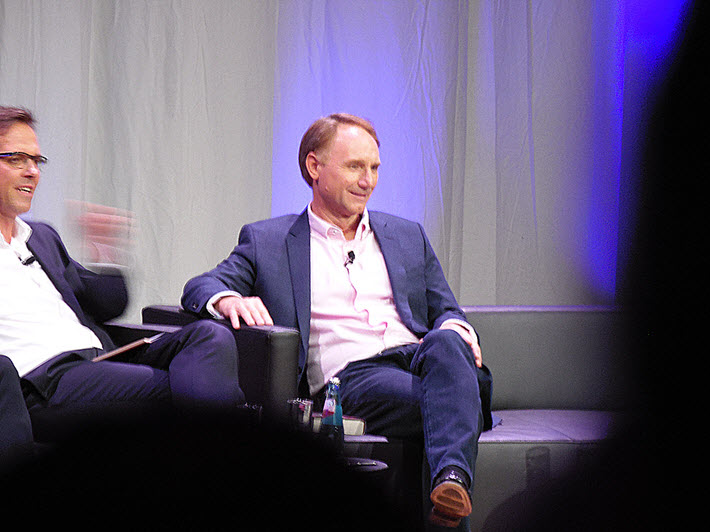 ‘It’s dangerous when religion thinks it has the market cornered on morality,’ Dan Brown told his readers at the Frankfurt Book Fair. His thriller ‘Origin’ originates with a conviction: faith is to be questioned. 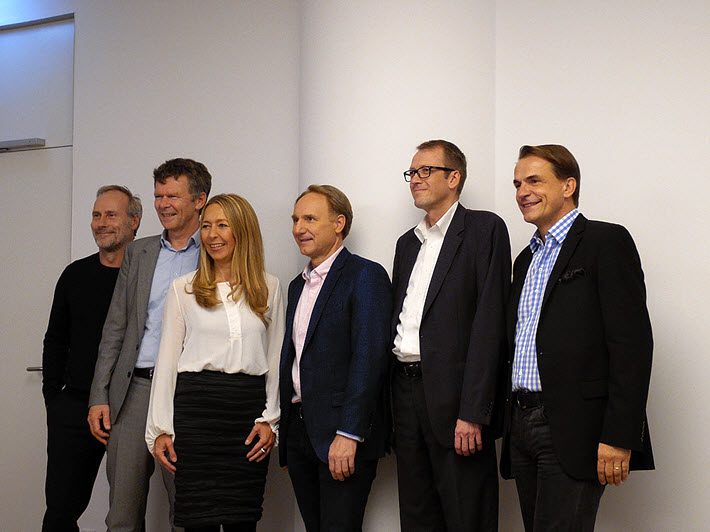 When Dan Brown speaks in Germany, you not only get to debate how many angels can dance on the head of a pin, but you also can hear that pin drop. A near-capacity audience at the Frankfurt Book Fair listened with rapt attention on Saturday evening (October 14) as Brown discussed his newly released Origin onstage. 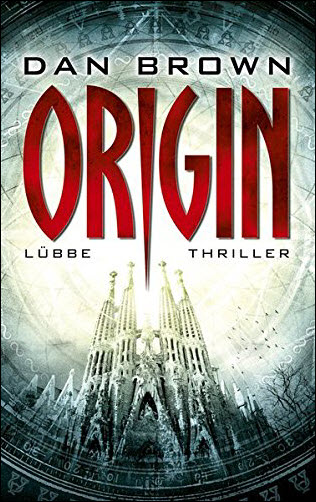 Affable and witty, Brown had a sofa to himself and bantered comfortably with the evening’s host, Alf Mentzer of hr2 Kultur. Mentzer drove the evening, a loquacious emcee, regaling the audience in German with an intricate point or two about the book’s themes and Brown’s comments—and then, without missing a beat, turning to the guest author, time and time again, with a concise question in English.

The actor Wolfram Koch—of Houston and the new The Captain from Robert Schwentke—had a small reading desk onstage from which he delivered lengthy passages from the new book’s text in German. At one point, Brown complimented Koch on the resonant tension he was able to create for the audience.

And for all the excitement in the room—along with the theological concepts that crackle in Origin—the evening never went hoaky or maudlin. Even a promotional video about the Spanish settings of the new thriller was tastefully made, expensively shot and edited. In its narration, as in his chatter onstage, Brown kept everything grounded and engaging with winking self-deprecation.

“I’m not a big fan of heights,” he admitted as the video showed him inside a cable car swinging queasily over boulders below, “and sometimes the research takes me to where I don’t want to be.” Outside the gondola, the magnificent Catalan cliffs of the monastery at Monserrat were rising, dizzyingly, behind him. “It looks like that’s the case today.”

This was a wry line that Brown had just pulled off, for anyone who knows his fondness for chapter-ending cliffhangers. 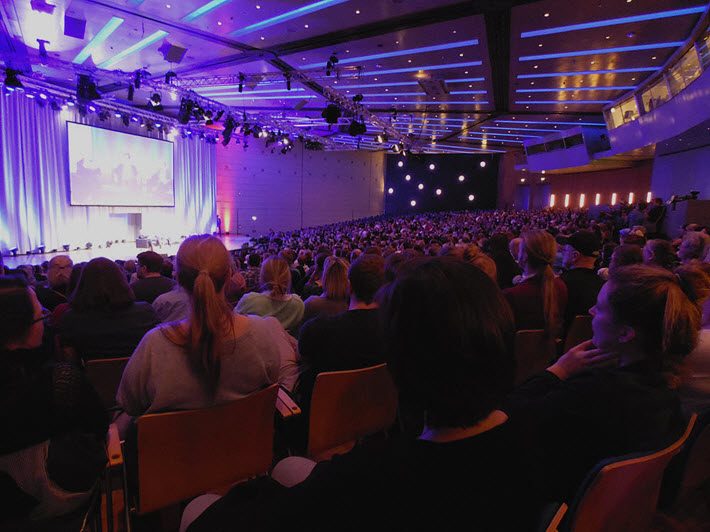 Brown’s new book, as The New York Times‘ Janet Maslin writes, “pits creationism against science, and is liable to stir up as much controversy as The Da Vinci Code did.” The story turns on an assertion of a theory that basically shoves religion out of the way. The monastery at Montserrat is where a futurist named Kirsch goes to shock three formidable figures in world religion with his insights, leaders of The Parliament of the World’s Religions. Like the settings, a note from the author tells readers, each religious organization in the book is real.

“One of the big problems of the world right now is that we’re not entering a dialogue with the people who disagree with us.”Dan Brown

Needless to say, Robert Langdon is needed quickly and, aha!, handily is one of Kirsch’s former professors at Harvard. It’s a small world when the end is nigh.

The Bilbao Guggenheim and modern art feature heavily in the book, too, as did the Louvre in The Da Vinci Code.

As Mentzer got around to this point, asking if museums compete for chances to be featured in his books. Brown looked out at the audience, a weary smile on his face: “You know, I do get an awful lot of gift books from museums,” he deadpanned.

Readers are comfortable with Brown’s art, too, it seems, Origin in the States capping the Top 10 overall list collated by Nielsen BookScan, Publishers Weekly’s Carolyn Juris reports (Doubleday, 144,759 units)–and “Brown bags it,” as The Bookseller’s Kiera O’Brien tells us, for a second week in the the UK, leading the Official Top 50, at 60,602 copies.

But as the evening wore on, the writer proved to be doing some deft verbal softshoe around issues as real and as serious as those religious organizations and settings he enjoys.

“We are a young nation,” he told the audience at one point, in reference to Trumpian America. “We’ve made a few mistakes lately.”

His concern appears to be authentic. “I’m worried that the terrible capability of our technologies is moving faster than our philosophies,” he said.

What if the world’s science really has outstripped faith-based prudence? It was hard not to think of one religion’s adherents driving another’s from Myanmar, or of the northern part of a peninsula being pressed into a nuclear corner by a bullying geopolitical tit-for-tat. 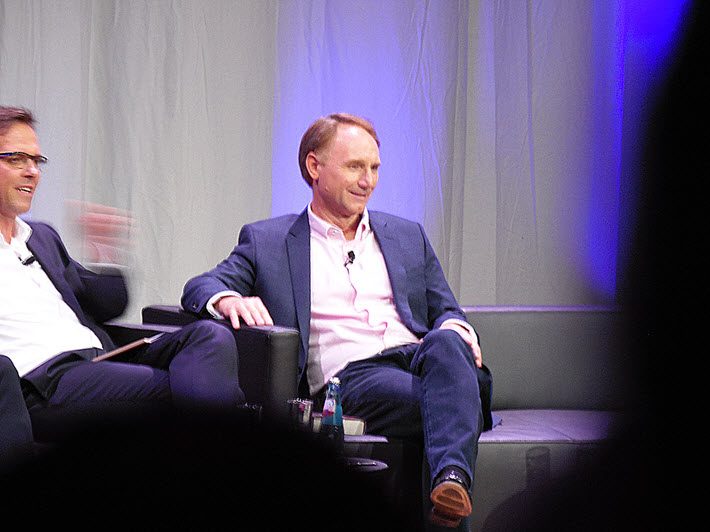 Dan Brown’s appearance at the Frankfurt Book Fair in support of his new release, ‘Origin,’ was the only such event planned for Germany. Image: Porter Anderson

‘Dialogue With People Who Disagree With Us’

No author or entertainer could ask for a more attentive audience than Frankfurt’s Messe-goers. Not even a cough broke the hush as they listened to this author. His best anecdotes drew huge rounds of applause.

“It seems like above all, right now, everybody’s talking and nobody’s listening. So I listen very carefully when people disagree with me.”Dan Brown

Whenever the conversation onstage got close to religion and art, Brown was most eagerly in his element, stirring currents of contemporary qualm and concern.

Book bannings came up, for example: “When I wrote The Da Vinci Code,” Brown said, “I may have been naive, but I didn’t know it would be so controversial. When I grew up, my mom was very, very religious. My dad was a math teacher.” Faith and science, married–like all Brownian themes, crystal clear. “It was a very strange household,” he said with a laugh.

“But I was allowed to ask questions of my faith. And that book asked the hypothetical question, ‘What would it mean, literally, if Jesus Christ were not the son of God?’ I thought that was a perfectly good question to ask. There were a lot of people, it turned out, who did not think that was a good question to ask,” some of those people being at the Vatican, of course.

While “it wasn’t the worst thing that could happen to book sales,” Brown said, “I was caught off-guard. And if the book had sold only 10 copies, it wouldn’t have had such a reaction.”

And that reaction seems to have helped focus Brown on what he wants to do in his work. He seems to find his real interest in the role of the provocateur. That’s the energy behind the topics that propel his sales and career.

Mentzer asked him why he didn’t take on the naysayers around the Da Vinci Code backlash, “Why didn’t you argue with them?” he wanted to know.

“I think one of the big problems of the world right now is that we’re not entering a dialogue with the people who disagree with us. It seems like above all, right now, everybody’s talking and nobody’s listening. So I listen very carefully when people disagree with me. And in some cases, you just have to agree to disagree.”

At the end of a Frankfurt week that had touched on the “tolerance of intolerance” dilemma—and had aggressively asserted the connective embrace of multicultural literature—it was hard not to wish that we might find a bit more of this Dan Brown on the pages of his so-popular books.

“When terrible things happen in the world, we hate to think that it’s random…A lot of people find comfort in the words, ‘It’s part of God’s plan,’ this feeling that there’s a master plan.”Dan Brown

He needed no melodrama, beautiful heroines, or car chases. The crowd was with him. The origin of Brown’s worldview, it turns out, is less about planet-threatening conspiracies and action-adventure than it is about a critical need for open exchange and respectful debate.

“Religion has done so much good in the world,” Brown said. “But simultaneously, it has been held up as a kind of banner of immunity from rational scrutiny. I don’t think any religion does itself any favors by saying, ‘This is our truth and you’re not allowed to question it.’

“I also think it’s dangerous when religion thinks that it has the market cornered on morality. There are a lot of people who are atheist or agnostic, who are also deeply compassionate and don’t need to know the Ten Commandments to know, ‘Thou shalt not kill.’ “It’s intrinsic in our being.”

More applause greeted that and most of Brown’s points, this audience knew its man. In an era of sometimes cruel and vulgar political hijinks, let alone religious dogma and rigidity, is it not time, Brown seemed to be asking, to take the world’s great faiths to task and to ask if they’re up to the dire perils of ignorance and selfishness in high places?

“I don’t consider myself anti-religious,” Brown said in answer to Mentzer’s question. “The question of religion is really one of open-mindedness. Religion serves as an important moral framework for a lot of people. It serves as a comfort to many people.

“I started out wanting to answer a question that I wouldn’t say has haunted me but has been on my mind for a long time: whether God can survive science.”Dan Brown

“In the book, I talk about how the human mind despises chaos. When terrible things happen in the world, we hate to think that it’s random…A lot of people find comfort in the words, ‘It’s part of God’s plan,’ this feeling that there is a master plan. For many people that’s a comfort and I’m happy to admit that there’s a role for religion in the world.

“The problem is when we start reading our myths and our fables as absolute fact. In my country, I’m astonished that in 2017, we have congressmen, major politicians, declaring openly that the world is 6,000 years old and that the fossil record was put there to test our faith and that Adam and Eve are literal truth and that they populated the entire world and had no problems with ethnicities and genetic inbreeding.

“It’s an astonishing thing to me that in this day such irrational thinking can happen. But it does. My fear is that if religion doesn’t evolve, it will become extinct.”

“But [what about] the risk you’re taking?” Mentzer said to Brown, in writing Origin with its suggestions that artificial intelligence can rewrite our understanding of divinity.

“Well, I write backward,” Brown told him. “I had the ending in mind. I rewound as far as I could” to create the story. “This novel affected me deeply, personally. I started out wanting to answer a question that I wouldn’t say has haunted me but has been on my mind for a long time: whether God can survive science. The ancients had a whole pantheon of gods to describe everything they didn’t understand about the natural world.

“Science came along…all of the gods of our past have fallen away. So I like looking at history,” Dan Brown said. “I want to know what effect the coming science will have today.”