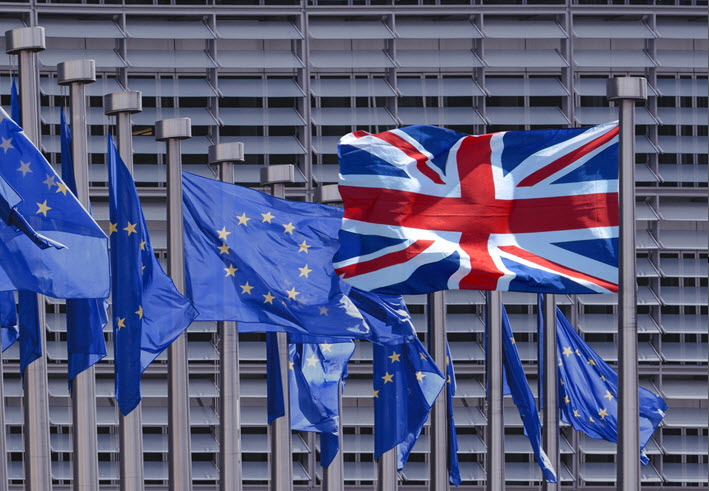 ‘We have to be realistic about the European market,’ says the Publishers Association’s Stephen Lotinga. ‘It’s our largest export market…but it’s also one that has been declining over at least the last five years.’

As the world publishing industry gathered at the Frankfurt Book Fair last week, the UK’s uneven Brexit negotiations with Brussels were one of the key political dynamics on many publishers’ minds. Today, we hear from the UK Publishers Association. Tomorrow, Friday, we’ll have the comments of the Federation of European Publishers. —Porter Anderson

‘Banging the Drum for British Publishing’ 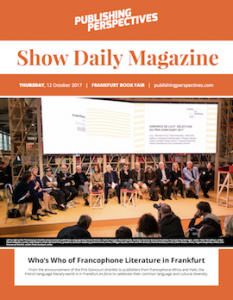 While much about the impact of Brexit on Europe and the UK remains uncertain–negotiations are still in early, difficult stages–we’ve asked Stephen Lotinga, who leads the UK’s Publishers Association (PA), for his insights from London.

On Friday (October 20), we’ll follow with commentary from Anne Bergman-Tahon, director of the Federation of European Publishers (FEP). At one point, Bergman-Tahon concedes that–for all the contractual wrangling to come, and despite an understanding that the people of publishing stand together in their resolve to see Europe and the UK succeed–”we are absolutely in despair over Brexit.” You’ll read more from her tomorrow.

Shorter editions of these comments were published in our Thursday (October 12) Publishing Perspectives Show Daily at Frankfurt, which you can download in PDF here.

We open our exchange by asking for the general tenor of thought in the robust UK industry, with so much hanging in the Brexitian balance.

Advantage: ‘Our Phenomenal Strength as Exporters’

Publishing Perspectives: A year on from publication of the Publishers Association’s Brexit manifesto, how are you feeling?

Stephen Lotinga: I remain very optimistic that, as a country, we can still get a good deal from Brexit, but I won’t deny that I think we’re frustrated that there hasn’t been more progress made so far, or that there hasn’t been an ability to give greater reassurance to businesses of all types about what the future holds—not least what happens in 2019. Is there going to be a transition period? And if there is a transition period, what does that look like?

But I remain incredibly optimistic that we can do this and that people will see sense and that pragmatism and good sense will prevail.

PP: In what ways might Brexit be better for UK publishers?

SL: So, first and foremost, trade. The great hallmark of the UK publishing industry is our phenomenal strength as exporters. But we have to be realistic about the European market. Yes, it’s our largest export market, in terms of the collective single market, but it’s also one that has been declining over at least the last five years, and beyond that as well. That’s because it’s a mature market and there isn’t an anticipation of huge growth in the future.

The real opportunities for UK publishers are potentially going to come from strengthened trade agreements with other parts of the world. We want to see the UK government taking the opportunity to strike new free trade agreements, to go around the world banging the drum for British publishing and the value of IP in the wider sector, and for opening up some of those countries, like China, which still have restrictions on how UK publishers can operate.

PP: How does Brexit help all of that? Can’t that happen anyway?

SL:  Well, because ultimately all of our free trade agreements are dictated by Brussels and a Brussels-agenda, we haven’t been doing this. It’s the reason why the entire UK government is having to gear up to the fact that we haven’t undertaken our own trade agreements in more than 30 years.

I’ll give you a specific example. Before the Brexit vote happened, the department dealing with trade agreements only employed about 12 people. All of the expertise was held in Brussels. By the time we leave the EU, they expect to be employing 500 people. So there is an opportunity, firstly both for the UK government to strike new deals, but also–and potentially more importantly—to strike deals which reflect the businesses of today, as opposed to the businesses they were 20 to 30 years ago.

Tariffs: ‘Not What We Need To Worry About’

PP: In what ways might Brexit be worse for UK publishers?

“The government insists on including students in their calculations of migration, and clearly if there are greater restrictions placed on students coming into the country that will impact the funding into the higher education sector, and by extension wider academic research.”Stephen Lotinga

SL: The biggest danger is what happens in relation to freedom of movement. One of the reasons why we’ve been so successful as an industry is because we’re able to attract the best talent, the best minds. Many publishing companies have cross-European ownership structures and operational structures, and they need to be able to access the right talent, particularly if we’re going to make progress on the digital front.

PP: In your Brexit manifesto, you say that between 2006 and 2015, the UK received £8 billion in funding from the EU for scientific research. You say you welcome the government’s commitment to safeguard the EU’s Horizon 2020 grants. But do we know if this will actually happen? Will funding be there until 2020?  If we leave the EU and still receive this funding, isn’t that trying to receive the benefits of being in the EU without being a member?

SL: All we have is the government’s assurance that they would seek to protect the funding that we’ve received in this area. As to what shape or form that will come in, we don’t know.

Obviously, we have to take them at their word on this—they’re setting out some of the priority areas. I think a bigger concern for the academic sector is the fact that the government seems to continue to insist on including students in their calculations of migration, and clearly if there are greater restrictions placed on the number of students coming into the country that will have an impact on the funding into the higher education sector, and by extension its capacity to fund wider academic research.

PP: This funding comes from the EU and we receive it because we’re a member. Why should the EU pay that if we’re no longer a member?  What would be the point of being a member?

SL: The government’s commitment is out of general taxation. Effectively they’re saying, ‘Look, over a transitional period, we’ll potentially still be paying in. We’re definitely going to be paying in until 2019 when we leave, therefore we’re entitled to receive this money.’

After that period has passed, the government is basically saying they’ll dip their hands into general taxation for the funding.

PP: How likely are UK publishers to retain tariff-free access to the Single Market, freedom of movement for employees, and assurances on copyright after Brexit? And if they can keep all of these outcomes after leaving the EU, what was the point of being in the EU in the first place?

SL: Tariffs is not what we need to worry about. If we were sat outside the EU now, it’s unlikely there would be tariffs placed on our books sold into the EU. So we could be in Morocco now, selling books to the EU and we wouldn’t be facing tariffs.

The problem is going to be customs. Lots of our members are still shipping a physical product and obviously not being part of the [European Union] Customs Union means there will be delays. We don’t want a situation where publishers are having their books, along with everything else, sitting in docks in various parts of the EU waiting for clearance. There are costs associated with that. And also, bluntly, the bigger danger is that publishers—particularly those large publishers–seek to move their operations to parts of Europe where they wouldn’t have to face that.

Copyright: ‘How Much Money People Can Derive’

PP: You said that Brexit could be an opportunity for the UK to legislate to create stronger copyright rules. Can you expand on this?  In what area are the current rules weak?

“There’s always a call by successive ministers of all political parties to talk about how wonderful the UK’s creative industries are. Well, now they really have a chance to put their money where their mouths are post-Brexit.”Stephen Lotinga

SL: There are two things I had in mind.

When we talk about copyright, obviously what we tend to talk about new exceptions that people like to bring forward. How we can change and how we can make sure content is more accessible to people who need it? And that’s all fine, and we’re very happy to contribute to that. But ultimately, what we’re talking about is how much money people can derive from their creative content and for how long. And that’s reliant upon people being able to enforce laws.

The Intellectual Property Office brought out their latest statistics this year on the number of people illegally downloading ebooks—they’re estimating around 17 percent of ebooks consumed, which is a pretty enormous amount.

There’s always a call by successive ministers of all political parties to talk about how wonderful the UK’s creative industries are. Well, now they really have a chance to put their money where their mouths are post-Brexit and actually make sure that both publishers and the wider creative industries in this country are able to properly protect their content and really be a shining light to the rest of the world about exactly what happens when you do that, how business will grow and develop and maximize their revenues.