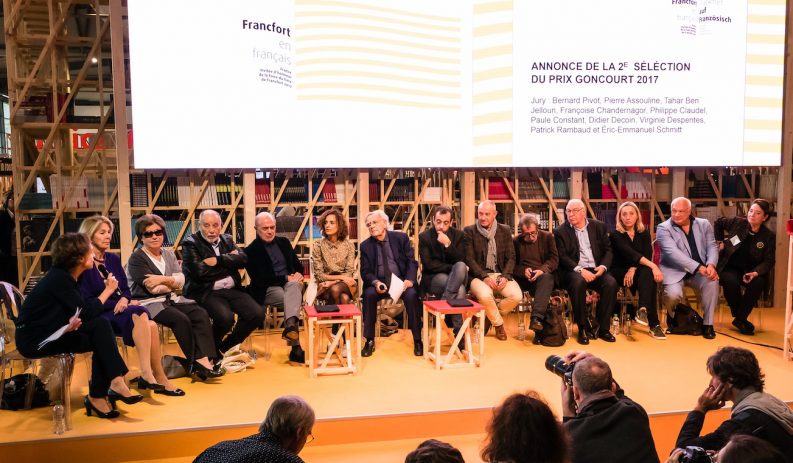 With France as Guest of Honor at the Fair, the shortlist of the Prix Goncourt is announced at the Frankfurt Book Fair for the first time. 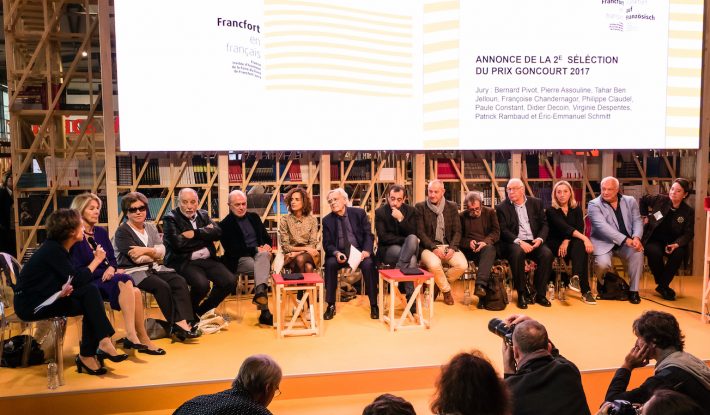 The shortlist for France’s top literary prize, the Goncourt, was announced yesterday at the France Guest of Honor Pavilion by an impressive group of authors and literati, including Virginie Despentes, Françoise Chandernagor, and Tahar Ben Jelloun. Not only was it unusual for the shortlist to be announced in Frankfurt, said Bernard Pivot, president of the Goncourt Academy, but the longlist of 15 authors had been reduced to a shortlist of eight authors in a “stupefyingly” short amount of time, inspired, no doubt, by “German speed.”

The Goncourt is an internationally recognized prize that guarantees the winners translations into other languages.

Leïla Slimani, last year’s winner said that within hours of getting the prize, 10 rights offers had come in from various countries. “The word ‘Goncourt’ is extraordinary. I had no idea before getting the prize. People in other countries are amazed that authors in France are treated like such stars.” So far, Slimani’s book, Chanson douce (Gallimard), has been translated into 37 languages.

Jérôme Ferrari, a Goncourt winner in 2012 for his novel Le Sermon sur la chute de Rome (Actes Sud) said that the Goncourt “immediately creates a rush for the work that won the prize to be translated. You hope it’s for the quality of the writing, but for me, what’s most important is that my work continues to be translated.”

Moroccan-French author Tahar Ben Jelloun, a Goncourt Jury member ended the shortlist announcement with a nice anecdote. He said his work was translated into 47 languages, one of which was Esperanto. In Rotterdam, he said, there is a community of Esperanto readers, and 2,000 copies were published in the language, which were immediately sold out.