With a boycott anticipated, organizers of Göteborg Book Fair say they’re confident their decision to include a hard-right exhibitor is correct. And producers of parallel programming are playing a complementary role in the result.

Kenyan author Ngugi wa Thiong’o and others this summer have announced their intention to boycott Sweden’s Göteborg Book Fair in response to its inclusion of a right-wing newspaper among exhibitors. The issue highlights the sometimes difficult realities of supporting freedom of speech: whose speech? And, as a producer of parallel programing tells us, it also provides an unexpected “inspiration.”—Porter Anderson

A Book Fair and Parallel Programming

When Sweden’s Göteborg Book Fair is held this year, September 28 to October 1, some 200 Swedish authors say they’ll stay away. The anticipated boycott is a protest of the fair’s decision to accept the right-wing extremist weekly newspaper Nya Tider (New Times) among its exhibitors this year.

“The book fair is an open arena for free association and freedom of expression, and it does not forbid opinions. That principle comes with a price–even detestable opinions can appear at a book fair.”Maria Kaällsson

Organizers report that 821 exhibitors are registered, the fair is fully booked. Many exhibitors register co-exhibitors right up to the opening of the fair. In 2015, there were a total 809 exhibitors and in 2016 there were 836. The fair’s programming includes 400 seminars, and 700 presenters and 37 countries are represented in the four-day event.

For example, a program called Scener & Samtal (“Scenes and Conversations”) is a series of sessions built around Göteborgs Litteraturhus, a membership literature center in the Swedish city. Human rights and freedom of expression are expected to be primary topics in many instances. Such events may be helpful to publishers who are looking for ways to participate in programming with which they feel it’s appropriate to be associated.

Publishing Perspectives has spoken with the fair’s leadership, with the organizers of the parallel Scener & Samtal program, and with a publisher who has thought carefully about how to engage in this situation. We begin with Maria Källsson, the fair’s director, asking how the original decision to include Nya Tider came about.

‘To Tolerantly Deal With Intolerance’

Maria Källsson: The question may seem simple. Why should we accept an exhibitor whose views we condemn? [Especially] considering the fact that we are also receiving criticism for the decision to do so. However, is it that simple?

We respect the criticism, but it’s not an easy matter. How we are to tolerantly deal with intolerance is a major dilemma in our time. It is true that we can expel extreme exhibitors from the fair. After all, we decide who is allowed to have a stand there. But we can’t expel them from society. In order to understand our approach and our principles, you have to understand what the book fair is. The book fair is an open arena for free association and freedom of expression, and it does not forbid opinions. That principle comes with a price—even detestable opinions can appear at a book fair.

This is the line that we have decided on. We don’t accept exhibitors who break the law, and we condemn hate, threats, and violence. The law is the absolute limit for exhibitors.”

Publishing Perspectives: Göteborg Book Fair has refused some extremist right-wing publishing organizations, but has accepted Nya Tider. What made the difference?

MK: We have chosen to allow one right-wing extremist exhibitor at the book fair as we offer an open area, but more than that are not relevant. We are not alone [among book fairs] in taking this action.

PP: What are your thoughts about existing and emerging alternative programs to Göteborg’s main fair? Do you have any kind of dialogue or cooperation with them?

MK: We’re positive that Göteborg is being strengthened as a literary scene, and we welcome the initiatives. It’s exciting, and we see many great opportunities for future cooperation. We already have ongoing discussions with some of the other parties. We’ll see where this leads.

PP: How do you engage with authors who have chosen either to boycott or to participate in both the book fair and in alternative programming?

MK: We have an ongoing dialogue with all cooperating partners. There are several instances of authors participating at the book fair as well as at alternative platforms. We cooperate in order to resolve such issues in the most practical way.

It’s our intention to make the book fair a grand manifestation of the values we stand for. Together with our cooperating partners, we’ve arranged more than 40 seminars touching on freedom of expression, human rights, tolerance, hate, and threats.

Göteborgs Litteraturhus director Sofia Gräsberg and artistic director Jesper Brygger, describe their organization—which is producing the Scener & Samtal program—as a kind of framework for activity directed by its members. They’ve answered our questions together, speaking for the organization.

The membership includes “literary organizations and groups within the greater Göteborg area with a public literary agenda. Members can be small publishers, literary magazines, creative writing communities, writers’ groups, cultural activists, etc. We have about 50 members, among them Swedish PEN as well as experimental publishing houses such as Dockhaveri and magazines like Glänta and Ord&Bild.

PP: Has Scener & Samtal emerged solely because of protests of Nya Tider’s participation in the Göteborg fair? Or does it have other goals of its own?

“We’ve never experienced anything like this exchange and breaking down of barriers. It’s been an inspiration.”Sofia Gräsberg and Jesper Brygger

Sofia Grasberg and Jesper Brygger: You can never reduce an initiative like this to just a consequence of a boycott. It’s true that the initial events that led to establishing Scener & Samtal had their starting point in the authors’ call for a protest. But there have been concerned voices in the Göteborgs Litteraturhus community as far back as 2015 or 2016.

But this thing took on a life of its own. Given massive interest from writers, publishers, and other literary actors, it’s clear to us that there also was a deeper need for a parallel structure that could serve as a platform for the variety of voices that is literature. These are voices that otherwise might not be heard or voices that otherwise might not have had the economic wherewithal to be heard. This is what Göteborgs Litteraturhus is all about

PP: How do you think the Göteborg Book Fair should have handled the application from Nya Tider to be an exhibitor?

SG and JB: We don’t think it’s constructive to comment on what they should do or not do. It’s a question that we’re sure the book fair [organizers] have asked themselves, and we hope they’ll continue to do so.

That said, it’s clear it that by letting Nya Tider exhibit, the book fair in a way left it to their customers, participants, and audience to decide how to take a stand. The question that each stakeholder must try to answer is which strategy is best, if the goal is to prevent the development of an extremist right movement and to defend democratic rights.

PP: How have you heard from participants who wanted to be part of both your program and the fair, but found it a hard thing to reconcile?

SG and JB: This has been a truly astonishing process in which participants have contacted us and we have responded with ideas and suggestions, and vice-versa. We’ve never experienced anything like this exchange and breaking down of barriers. It’s been an inspiration.

Several of our participants will be active in both venues. Of course we don’t have any problem with that; quite the opposite. Among these you’ll find Arundhati Roy, Samar Yazbek, Agneta Pleijel and Swedish PEN.

We’ve discussed the dilemma with many people, mostly in the network of our members. We don’t encourage authors or publishers to choose either/or. We, as a membership organization, never advocated boycott. Our members are at both places. 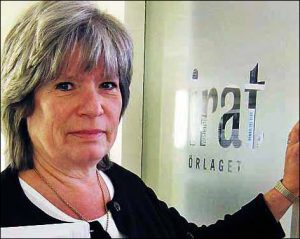 Ann-Marie Skarp is co-owner and CEO of Sweden’s Piratförlaget AB, a publishing house that makes it a point of supporting its authors with more than traditional royalty payments.

Skarp says that the house hasn’t been directly affected by the controversy around Nya Tider and Göteborg Book Fair.

“Our decision,” she says, “has been to exhibit at the book fair. It attracts around 100,000 visitors each year. So we have no wish to deprive all these people of listening to all the authors and conversation that takes place those four days.

“We’ve of course kept our authors informed about our considerations and decisions. None of our authors has asked us to boycott Göteborg Book Fair, and we actually have a very good relationship with the fair.”