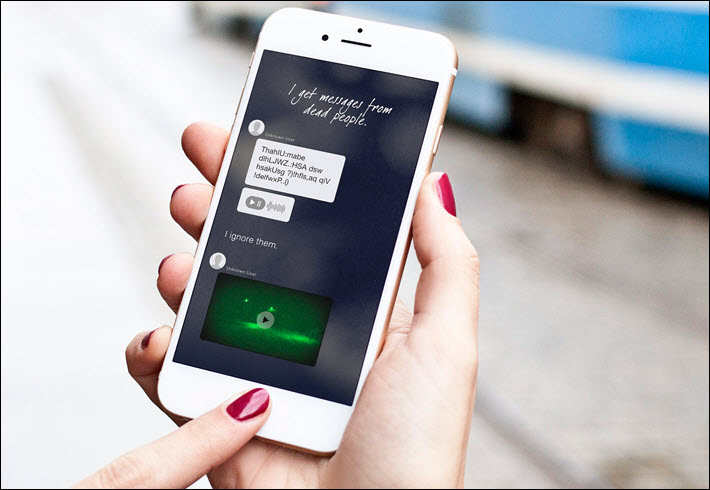 ‘The creative team had to learn to speak tech,’ but Germany’s oolipo now is close to releasing its tools for user-generated content development, since changing leadership in August. 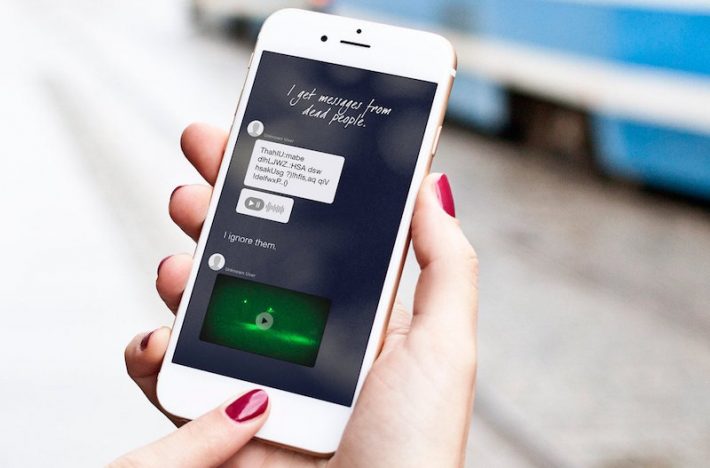 In oolipo’s ‘Jellybone’ by UK digital author Kate Pullinger, users experience a story of smartphone messages from beyond the grave. Image: oolipo

As Frankfurt approaches (October 11-15), we look in on this German startup and its executives to see where things are now.

Johannes Conrady is CEO and quite recently took up the position: he’s been in the role for two months, having served as COO since November 2014. And Dorothea Martin is CCO, and she’s been with oolipo, working in content, since 2016.

Publishing Perspectives: In March, we were learning about the launch of oolipo’s mobile platform. Can you catch us up on what the news is now? We understand that UK-based digital author Kate Pullinger’s content for the platform is about to be ready? 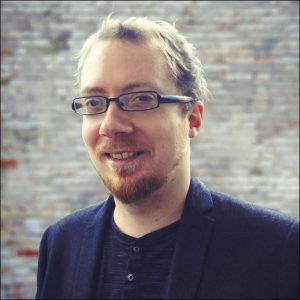 Johannes Conrady: There’s been a lot of progress in the past couple of months, and that is becoming more visible now. In mid-September, we launched the Android version of our mobile app alongside a major overhaul of the iOS following experience with and user feedback on our earlier iOS app.

In parallel, we’ve been working hard to get a powerful set of creation tools out to the first 300 users in a closed beta, and we’re about to open them up for everyone in October, embedded in a Web platform that comes with a viewer version for oolipo stories for mobile browsers.

In the ongoing process of close iterations between the oolipo format, the content development, and our creation tools, we’re glad that we’ve had professional authors like Kate Pullinger and Matt Thorne, who agreed to go through an admittedly lengthy process of exploring the possibilities our format offers.

We’re pretty excited about the recent release of Kate’s Jellybone and the first episodes of Matt’s High that came with the launch of our Android app in September.

PP: How has the company’s staffing changed? Our last interview was with Ryan Mullins, whom we understand has left the company. How are things organized now? 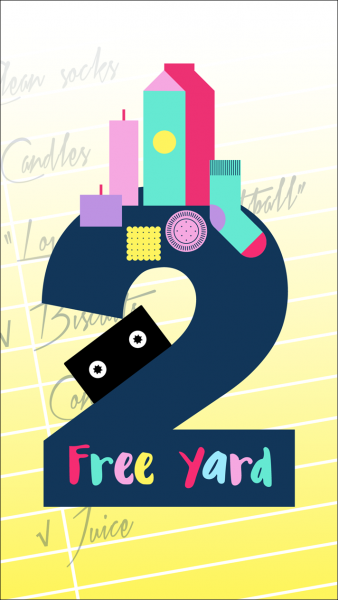 JC: That’s right, Ryan left his operational role with oolipo in August due to personal reasons. He remains close to me and the team, which I’m quite thankful for.

After we initially focused on the in-house production of original content to explore the possibilities of our format, we made a few operational adjustments to become an open platform that offers tools to users to create content. Our current team consists of seven people fully committed to driving the development of our product and building up a community of creators and mobile storytelling enthusiasts.

PP: What is oolipo’s relationship with Bastei Lübbe?

JC: The platform and product oolipo were developed and launched by oolipo as a company in its own right. Of course, Bastei Lübbe is not only the initiator but a strong strategic partner, especially when it comes to content expertise. As the major shareholder, this relationship stands to date.

However, since building up a community and user-generated content platform, oolipo is currently looking for additional strong partners with a strong focus on growth.

PP: Including Pullinger’s Jellybone, what’s the content now available on the site? 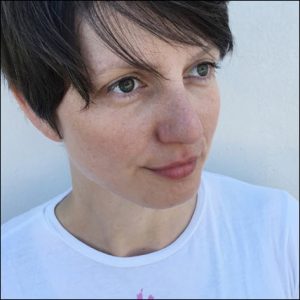 Dorothea Martin: We have five oolipo originals on the platform now (you can have a look here).

Jellybone by Kate Pullinger is the latest complete release (all 10 episodes are live on iOS and Android). The first four episodes of Matt Thorne’s High have been live since September 14, and there’s Karrie Fransman’s graphic novel Darkness Behind Our Eyes, our documentary with Blam Studio about women’s empowerment through skateboarding in South Africa, Get Used To It and Suli Break’s London, I.

The only German story on the app at the moment is from our main investor Bastei-Lübbe, a WhatsApp chat fiction story by Tibor Rode called The Message. With the beginning of the open beta of our platform in October, there’ll be soon more stories by our users available.

PP: Speaking of stories by users, how much emphasis is there now on user-generated content? 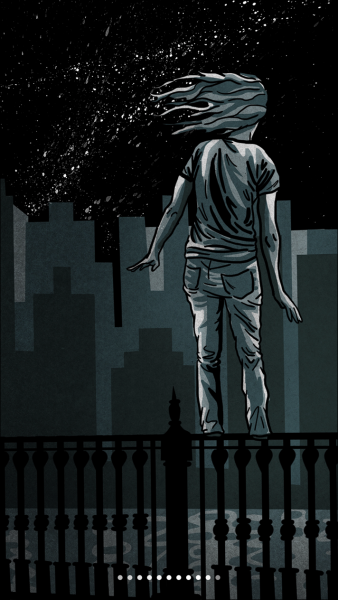 JC: It was both Ryan’s and my firm belief from the early stages on, that ultimately users must be able to contribute their content to explore the full potential of the format we created. The chicken-and-egg problem for us was initially that we had to have a first approach to this new format, ourselves, to develop the tools that enable users to create their own stories.

Since the creation tools are about to be publicly released next month, the focus on outside users will be even stronger.

In the last two months, we went through a closed beta stage accompanied by workshops with creative people from different fields of media and storytelling, and we’ll continue to do so because the huge potential we see in those people–triggered by our early version of the tools–has to be shaped alongside a committed community of creators.

PP: What kind of business model is in place now?

JC: Right now, the platform, tools, and content are fully free for everyone, while we kick off community growth. Beginning next year, we’ll let creators decide if and how much they want to charge for access to their stories and episodes.

Our focus now is to establish a platform and a format that people want to use and can see fitting into their daily media consumption. You have to give users a chance to get used to a new format before asking for something like a monthly subscription. However, as soon as we see that there’s a demand for the kind of content that makes a monthly subscription a reasonable model for consumers as well as creators, we’ll add that option.

It’s important to maintain a balance between free and paid content.

‘Breaking Through the Fourth Wall’

PP: What’s been the most exciting part of the experience so far? 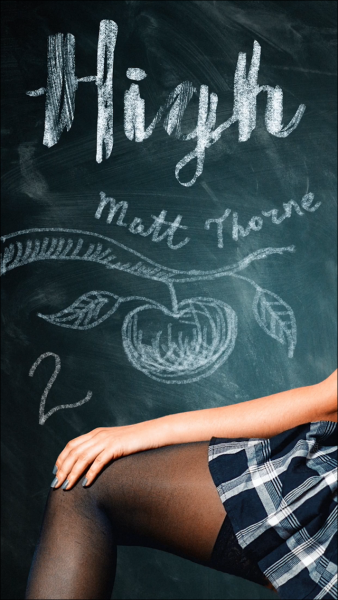 DM: For me, developing the actual format with the team was the most exciting journey. The moment when what we planned came to life, when technology and story created magic and the story–although we knew it by heart–became a surprise again.

Besides the stellar writing from our authors, this is partly a consequence of the interdisciplinary working process.  But most importantly it’s the oolipo technology.

In Jellybone, for example [in which messages from beyond the grave seem to be arriving by phone], even my colleagues David Löwe, the designer, Solveig Pobuda and I as producers–the ones who planned which action and which medium we use for which part of the story–turned into users again, experiencing the story for the first time when ghost messages sneak up on you through your phone. That’s when you become the main character, and the phone in your hand is Flo’s phone and you’re the one receiving those messages.

So, these moments when we realize we’re “breaking through the fourth wall,” they’re the most exciting.

PP: And where do you find challenges cropping up most frequently?

DM: Well, in the beginning, the creative team had to learn to speak tech, and the developers had to understand content which was a very fulfilling challenge for all of us.

Now we have this powerful tool, and it’s maybe more about simplifying it to a certain degree to make it as easy as possible to use. When you work so long on something, it’s hard to lose the insider view of things. So, the closed beta phase and the workshops we did with users were valuable for us, giving us feedback from first-time users.

PP: Lastly, will oolipo will be at Frankfurter Buchmesse again? Any plans for presentations or other events?

DM: Yes, we’ll be there. If you’re interested in talking to us and learning more about the possibilities of oolipo, please leave us a tweet or send us an email in advance, so we can meet. And everyone is invited to join us for our choose-your-own-adventure presentation at the Orbanism space on Wednesday from 4.30 to 5 pm (Hall 4.1 Stand B91), where the audience will decide the course of our talk about media industry buzzword bingo–powered by oolipo.