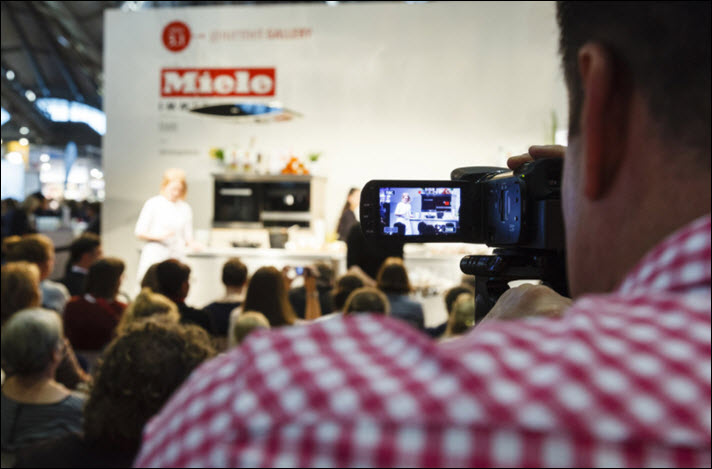 With sessions on cooking, celebrity chefs, and health, Frankfurt Book Fair’s cookbook-focused Gourmet Gallery has a busy schedule of events this year. 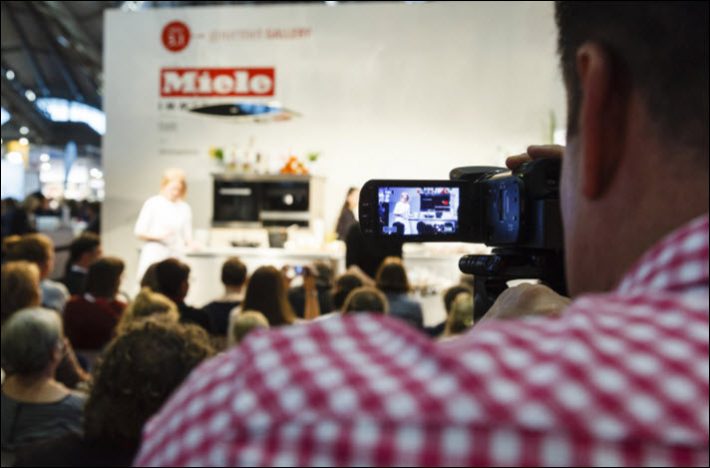 At Frankfurt Book Fair’s Gourmet Gallery in 2016. Miele is back in 2017 as premier partner in the program. Image: Frankfurter Buchmesse, Marc Jacquemin

Saving the World With Food

The Gourmet Gallery comprises some 1,000 square meters of space in Hall 3.1 (stands K90 to L135) and focuses this year, organizers say, on stories behind food and cookbooks.

The program is a busy one, featuring publishers, celebrity chefs, cookbook authors, and more. Here are a few highlights of the program this year.

“Where Pleasure Meets Business” is a guided tour for experts and journalists with Gourmand World Cookbook Awards’ Edouard Cointreau, set for October 13 at 12 p.m. France, this year’s Guest of Honor, is featured, as are China and Korea. And 2019’s Guest of Honor, Norway, is to be represented by partner Arcus Aquavit with samples.

At 9 a.m. daily, there’s a business breakfast in the show kitchen area of the Gourmet Gallery. Publishers, authors, and journalists will be seeing Next 125 kitchen designs during these events.

Food blogger Sophia Hoffman and others including Helke Niemoeller, Stevan Paul, and Katharina Brömel, will be talking about food and blogs on the 11th, 12th, and 13th of October at 1 p.m.

Tobi Müller, another blogger, leads a tour of the Gourmet Gallery exhibition area with Instagram snapshots in an #instawalk at 2 p.m. on October 13.

“Food in the Trash” is less disturbing than it might sound, and in fact quite important: it’s a discussion between Hendrick Haase and film director Valentin Thurn (Taste the Waste) and food activist Daniel Anthes about initiatives in curbing food waste. Organized by Schrot & Korn, this session is set on both October 14 and 15 at 12 p.m.

In another Schrot & Korn session in food awareness, “What Are We Going To Eat Tomorrow? Food Should Be Healthy and Save the World” brings Stephanie Silber and nutritional sociologist Daniel Kofahl with author and organic expert Dr Felix Prinz zu Löwenstein in conversation, again on October 14 and 15, at 2 p.m.

Forty-year career chef Johann Lafer talks about his best positions and experiences in the business at 2 p.m. on October 12, organized by Gräfe und Unzer Verlag GmbH.

And Christian Henze, the television chef of MDR um 4, brings his cookbook This Is How We Cook Today (So kocht man heute) to life in demonstrations with food tastings for attendees on October 12 in this session organized by Christian Verlag GmbH.

Gourmand International is in its fourth year of partnership with Frankfurter Buchmesse in the Gourmet Gallery program, and Miele is supporting the program as premium partner for an eighth year.

More information on the Gourmet Gallery programming available this year is here.