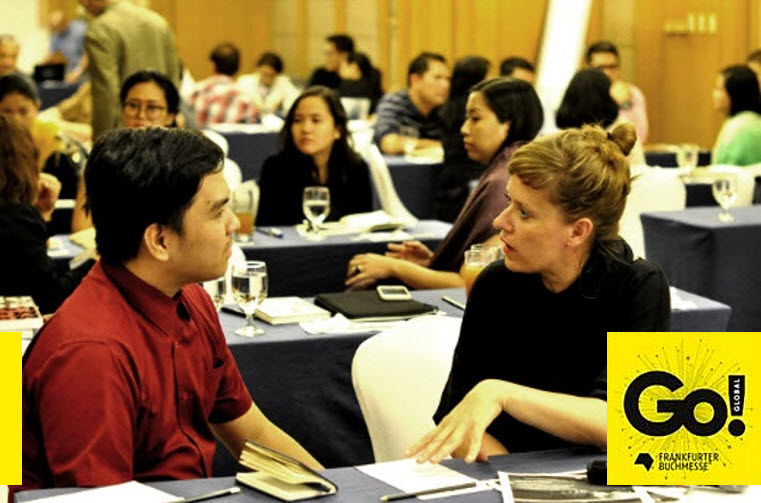 Publishing experts in the Philippines offer an inside look at their book market and the international opportunities they see in Southeast Asia and elsewhere. 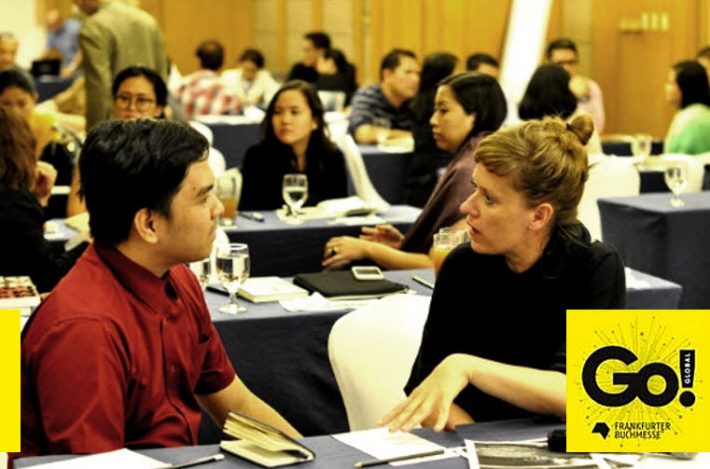 It’s also a producer of year-’round international programs designed to enrich the exchange and cultivation of our globalized industry.

A part of Frankfurt’s international activities is the organization and delivery of workshops for publishers abroad.

And last month, a three-day workshop was held in Manila as a co-production of the Frankfurter Buchmesse and the Philippines’ National Book Development Board (NBDB), the Book Development Association (BDAP), and the German Federal Foreign Office. Attendees were, in part, readying themselves not only for Frankfurt but also for the Manila International Book Fair, which runs this week through Sunday (September 17) at the SMX Convention Center.

A larger Frankfurt offering is coming up November 13 and 14 when we stage the annual StoryDrive Asia conference in Singapore in association with the Singapore Book Publishers Association. You can find out more about that event here.

Some 40 editors, publishers, and managers attended the workshop in Manila, and we have an interview today with an attendee, the translator, bilingual writer, and literary scholar John Toledo. 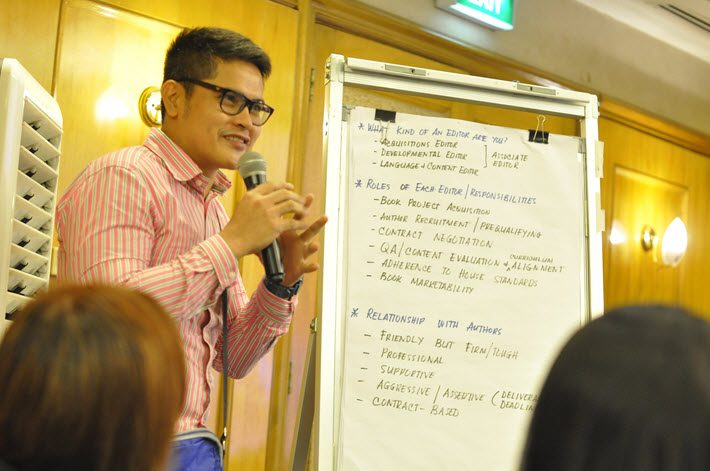 The changing roles of editors in a digital market were among topics at August’s publishers’ workshop in Manila. Image: Daniel Tan Photograhpy

Scaling Up for Internationalism

Publishing Perspectives: Can you start by giving us a sense for the scope of the Philippines’ book market today?

John Toledo: The Philippines forms a strong publishing market with more than 400 literary artists at work across the country, according to the country’s National Commission for Culture and the Arts. According to the National Book Development Board, the market as of 2016 comprises:

Some 9,000 titles are published in the Philippines annually, the development board tells us. The number of book titles released in 2015 reached 9,480, based data from the National Library of the Philippines.

For a country that has a simple literacy of 96.5 percent and a functional literacy of 90.3 percent, media content and literature in the Philippines represent some 60 percent of industry copyrights, according to a study of the World Intellectual Property Organization (WIPO). The book publishing industry amounted to US$153 million or 0.054 percent of revenue in the country’s 2014 GDP in 2014.

In a 2012 Book Development Board readership survey:

As Gordon Kricke of the German embassy in Manila puts it, “The Philippines is a country that has a lot to offer in many fields, and Filipinos are very open-minded, welcoming, and interested in new experiences,” making for a market in which publishing experimentation may find some traction.

What’s more, the Philippines now participates consistently in the Frankfurt Book Fair in order to build its presence in the world market and a sense of looking outward at home.

Ani Rosa Almario, a board member of the Book Development Association, says, “We want our books on the international stage and it means we’re also open to acquiring titles so that quality literature will get to us.” To that end, the Philippines reached a milestone last year at Frankfurt, opening its first official national stand there. 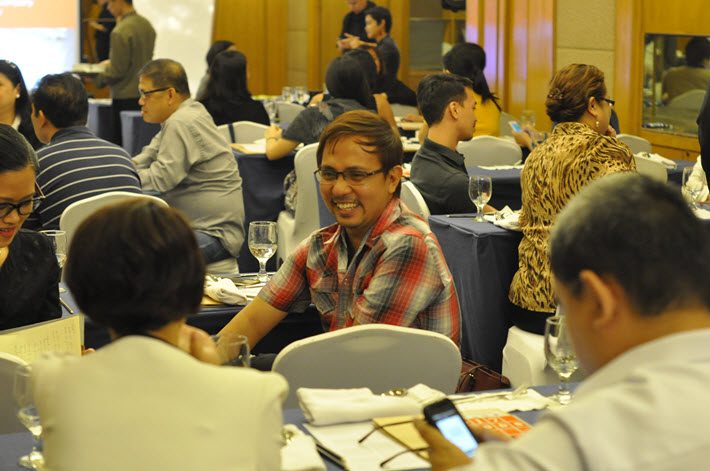 PP: Almario’s interest in acquisition of important titles is a familiar part of the country’s market approach to the world.

Frankfurt vice-president for business development Claudia Kaiser says that the international industry is coming to recognize the Phillipines as a license-buying market. “With workshops like the one in Manila,” she says, “we want to further encourage local publishers to present their titles on the international stage and sell the rights internationally.

We see potential here,” Kaiser says, “for the export of print titles because we currently see a lot of English-language works conquering the Filipino book market.”

Some observers say that the Philippines’ content is among the best that Southeast Asia has to offer and correctly positioning it is critical to its success in the wider world market.

One of our speakers in last year’s Frankfurt Book Fair The Markets conference was Andrea Pasion Flores, general manager with Anvil Publishing. The Markets, produced by Publishing Perspectives and Frankfurt, is set this year for October 10 at Frankfurt’s Business Club in Hall 4.

Today, Pasion Flores says, “I think that to sell in North America and Europe depends on the content,  but we can do it.” 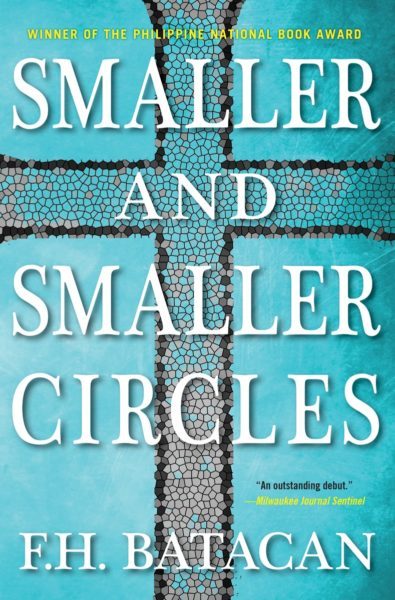 She highlights international rights sellers from the Philippines including Smaller and Smaller Circles by F.H. Batacan, described by some as the country’s first crime novel and published by Bronwen Hruska’s Soho Press.

JT: Rex Bookstore, the nation’s biggest textbook bookseller with networks reaching the Middle East, Europe, the US, and the UK, has been at Frankfurter Buchmesse for the past 25 years. The company’s general manager, Sonia Santiago, says, “The market hasn’t changed. There’s still a rapid increase of printed materials like textbooks And we also play the game by producing digital materials like ebooks. Dominador Buhian, the chairman of Rex, says that the Philippines market is about 93 percent print.

The department of education’s figures show that the textbook market catered to 18.9 million public school enrollees in the 2015-2016 school year, while they projected 2.9 million private school enrollees the previous year. On average, the Philippine government has procured 37.2 million textbooks annually from 2011-2015.

Competition and timetables have become tricky, says Glenda Torio of Vibal Publishing. She says she finds that it can be tough to get competent and committed authors who can hit their targets.

“Our challenge,” Torio says, “is to position our books with the curriculum of other countries, especially those under the Cambridge curriculum or the national curricula of the US,” she adds. Recently, Philippines has introduced a mother-tongue-based education system that promotes the 12 national languages. The country has added grades 11 and 12 to its high school  curriculum.

In the opinion of Aneka Rodriguez, deputy executive director of the Book Development Board, textbook publishers are in the majority because families prioritize schoolbooks. And so, “The largest client of textbook publishers is the government because it’s distributed across the archipelago,” she says.

Academic and scholarly publishers have a very limited international readership, says Gerry Los Baños,  deputy director of the University of the Philippines Press. “Publishing in the Philippines is very expensive for the UP Press,” Los Baños says. “Compared to content from China, our books are very expensive and that’s not even counting the shipping process.” State university publishers, he says, have a long way to go in the international market, though they can sell ebooks through Flipside Publishing.

And for private university presses, the challenge is to raise Filipino consciousness, says Kevin Dy who leads sales and marketing at Ateneo de Manila University (Admu) Press. “It’s always seen as a means for social mobility and education,” Dy says. “Not so much in terms of as a conversation about our culture.” 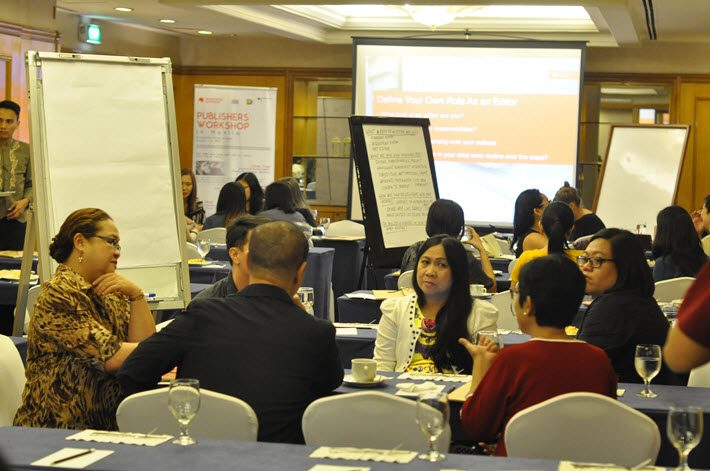 PP: How do you see children’s and young-adult titles doing in the Philippines market?

JT: With quality illustrations, children’s books and young adult titles are the strongest market in the Philippines, says the Book Development Association’s Almario. 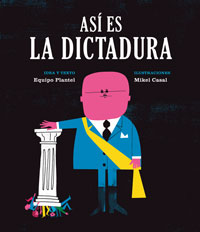 Her own company, Adarna House, a major children’s literature publisher, has recently bought rights for a Filipino translation of Equipo Plantel’s 1977 So This Is the Dictatorship which has illustrations by Mikel Casal and was originally published in the aftermath of Spain’s Franco regime.

“We’re looking for other Asian countries which have the same universal themes,” Almario says, although for the most part, she says, books with beautiful illustrations and stories about imagination and children’s typical experiences, are the main draws. “Sellers are also interested in our folk tales and legends.”

PP: What elements of the workshop in Manila did attendees find most applicable to their needs?

These lectures were followed by focus-group presentations from publishing stakeholders. The groups wrote a love letter to an author, pitched a best-selling title, created an online campaign, and built a roadmap for the next five years.

Ullstein’s Vogt was frank about the need for position on the global stage: “I think the Philippines will have to create more visibility for their authors and books in Europe,” she told the group. It can be hard for foreign-language publishers like hers, she said, to spot and recognize strong content from other cultures, because “we only buy translation rights from English-speaking countries and perhaps provide grants for authors. There aren’t many famous Filipino authors known in Germany,” she said.

Buchmesse’s Kaiser pointed out the lack of new authors generally presented at international book fairs, mentioning that the Philippines are commonly remembered for Jose Rizal, F. Sionil Jose, and Miguel Syjuco, among others. 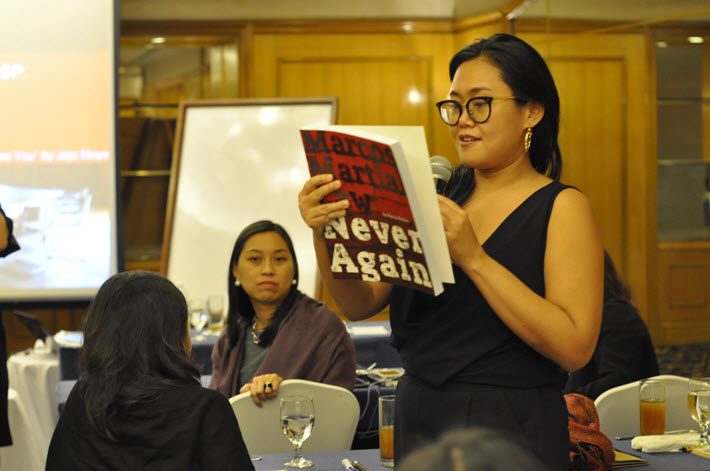 PP: Are there internationally relevant political factors involved in the Philippines’ progress in wider markets?

JT: Interestingly, Frankfurt Book Fair’s workshop this summer has quite some tradition behind it. The first of Buchmesse’s workshops was held in Cebu in 1983, followed five years later by another in 1988. Back then, junior professionals attended the workshops, which were focused on improving book design and print technology. Most participants were trade book and textbook publishers.

The German-Philippines connect has been fruitful, says Ateneo Press director Karina Bolasco, another speaker at last year’s The Markets at Frankfurt. Bolasco was at the 1988 Mainila workshop, and now praises the influence of German book illustrator Reinhard Michl, who taught Filipino children’s book illustrators in that workshop.

Today, the illustrators’ community in the Philippines continues to organize itself as a professional collective, the Illustrador ng mga Kabataan.

But yes, another major challenge is the volatile political situation. 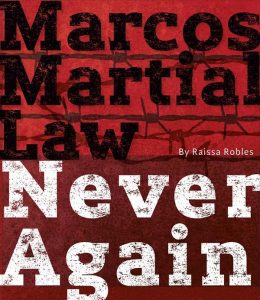 Raissa Robles is publisher of DTST Publishing and the author of Marcos Martial Law, Never Again (2016).

“Because we had too many political problems,” Robles says, “the book industry had to take advantage of opportunities that were handed to us.

“Frankfurt Book Fair has always been the market for trade of intellectual property rights. We need to take advantage of that kind of connection.

“Senator Loren Legarda’s term expires in 2019. She has already committed to support the Philippines as a Guest of Honor in Frankfurt in the future, possibly in 2022. But I don’t know how she’ll support the project. What we have to work toward is visibility for Philippines books among German publishers.” 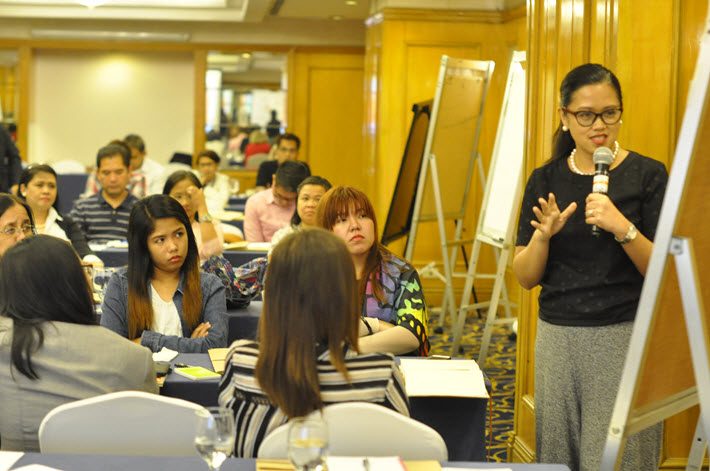 Self-Publishing in the Philippines: Wattpad and Beyond

PP: And how does self-publishing factor into the market in the Philippines?

JT: Self-published authors are vocal about what they see as a lack of support for their work.

Maita Rue, a novelist for the Philippines’ mobile phone and electronics company Cherry Mobile, says, “We push our books in English abroad but what happens? Nobody notices us.

At least at the workshop, Rue said, “They heard us” on issues for self-publishers, their inclusion being what she called a “saving grace.”

Self-publishers also find a home at Wattpad, where online writing and reading is handled as a social networking affair primarily drawing young and millennial audiences. The Toronto-based company has said that the Philippines is the world’s second-largest Wattpad nations, after the United States.

Sheila Allerey, another independent publisher, says there are 4 million Filipino writers operating on the Wattpad platform. She suggests, “Young writers must be positioned… and they can rise up together with traditional publishers. We can make it happen.”

PP: And what’s ahead on the calendar next for the Philippines’ publishing community?

JT: Our publishers look forward to the upcoming international book fairs, such as this week’s Manila International Book Fair, Frankfurter Buchmesse in October, and November’s StoryDrive Asia in Singapore.