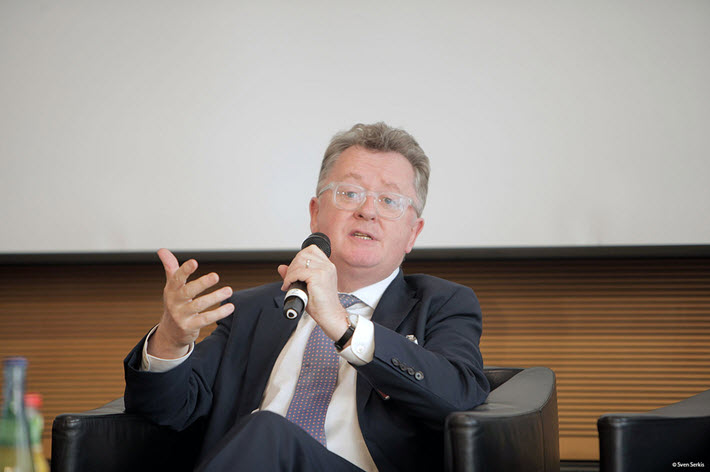 ‘Copyright has come to be seen by many outside our industry as an inhibitor to creativity,’ writes Michael Healy ahead of a special session at the Frankfurt Book Fair on proliferating international challenges. 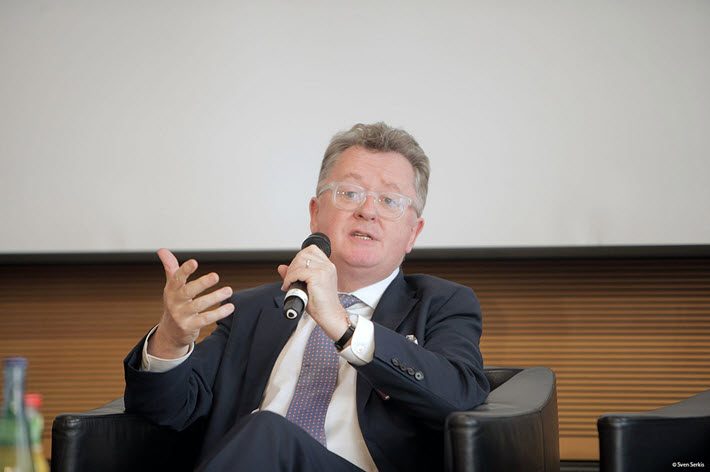 At the Frankfurt Book Fair (October 11-15), one of our Publishing Perspectives Talks series of events at the Business Club will focus on mounting challenges to copyright in various parts of the world. Titled “Toward a Copyright Manifesto for International Publishing,” the event will feature Michael Healy, executive director for international relations with Copyright Clearance Center, at 10:30 a.m. on Thursday, October 12.

The intent of the discussion is to create the beginnings of a concise manifesto that publishers can use to guide their thinking on copyright’s essential importance to the worldwide book publishing industry.

Featured in the program in addition to Healy will be:

Today, we’ve invited Healy to provide us with a snapshot of copyright challenges. Here are his thoughts:

‘A Worldwide Audience Is Watching’

When did copyright become such a hot topic?

For most of my career in publishing, it was talked about rarely. When it was discussed, it seemed to be the preoccupation of lawyers and academics. Senior leaders in publishing didn’t have to think about it much, if at all. It was one of those essential foundation stones on which the industry stood: safe, secure, dependable.

Those comfortable days are long behind us. The foundation has been shaking for several years and continues to do so. Everyone knows why. A global, ubiquitous content network has facilitated sharing to a degree unimaginable previously. The “content demands to be free” mantra has powerful supporters in Big Tech companies and some governments. Licensing, critics say, is cumbersome and inefficient.

In quite a short time, copyright has come to be seen by many outside our industry as an inhibitor to creativity and innovation instead of the enabler and protector it once was.

It’s true to say that the consequent disruption to our industry has been felt more intensely in some countries than others.  Canada stands out in this regard.

The late actor and comedian Robin Williams famously (and rudely) likened Canada to “a loft apartment over a really great party.” The implication was obvious. All the action was in the US, while Canada was a place where very little happened. In the world of copyright, nothing could be further from the truth.

For the past several years, Canada has been on the frontline in the world’s “copyright wars,” a place of seemingly endless and very public confrontation.

How did this happen? How did Canada become such a battleground, a place rights holders and educators have fought so bitterly, and the focus for so many other countries considering the future of copyright?

The starting point for most people was The Copyright Modernization Act, a piece of legislation introduced by the Canadian government in 2012 and widely interpreted by educators as allowing them to use copyrighted content without seeking permission from, or paying, the rights holders.

Publishers and authors cried foul immediately. The legislation, and a series of subsequent judgments from the Supreme Court of Canada, were seen as devastating to their business interests and very damaging to Canada’s wider cultural industries.  Some publishing companies closed down entirely.  Others reduced their output or diverted resources away from educational titles.

“Decisions profoundly hostile to the interests of content creators; decisions that offer no protection against systematic and unremunerated copying of educational and scholarly content.”Michael Healy, Copyright Clearance Center

Some US publishers pulled back, shuttering their Canadian operations.  They, along with many commentators, complained that the pendulum had swung too far, that the essential and delicate balance between incentivizing and rewarding rights holders on the one hand, and making content accessible and affordable for Canada’s teachers and students on the other, had been broken.

Estimates of the loss to rights holders have been put as high as $50 million per year.

Five years later and the battles still are raging on many fronts.

Earlier this month, the reproduction rights organization (RRO) in French-speaking Canada, Copibec, publicized its class action lawsuit against Université Laval, alleging that the university “infringed the patrimonial and moral rights recognized under the Copyright Act.”

The class action, authorized by The Québec Court of Appeal in February, was filed on behalf of “all authors and publishers from Québec, the rest of Canada, and other countries.”

Copibec’s equivalent in Anglophone Canada, Access Copyright, has had its own battles going back several years.  In July this year, it had a much-needed boost to its efforts to roll back what it sees as the anti-copyright tide when a federal court ruled in its favor in an ongoing dispute with York University.  That case has focused essentially on whether the copying policies implemented by the university are fair and whether the university can decide unilaterally to withdraw from the per-student tariff scheme administered by the RRO.

In his decision, Judge Michael L. Phelan sided with Access Copyright on both issues, concluding that the tariffs are mandatory and that the university’s “fair dealing guidelines are not fair in either their terms or their application.”  York University has announced that it intends to appeal the ruling, and it’s reasonable to assume that it will take months or even years for this case, as well as the Copibec one, to be resolved.

Whatever the outcomes, these and other related developments in Canada will be watched very closely by the country’s authors, publishers, and educators. But the significance of what happens in Canada extends far beyond its borders.  That’s why a worldwide audience is watching what happens next.

“Decisions that refuse to recognize publishers as legitimate rights holders for the purposes of receiving monies from copying levies; decisions that have the effect of widening the exceptions to and limitations on copyright.”Michael Healy, Copyright Clearance Center

Canada’s 2012 legislation has to some extent been the basis of proposals for new copyright laws in other countries, notably South Africa and Australia, provoking fears among many rights holders that anti-copyright sentiments—what they call “the Canadian flu”—might be infecting other jurisdictions.

In Australia, rights holders and their representatives have been fighting proposals set out by the country’s productivity commission to introduce a US-style fair-use exception into its copyright law. Publishers, authors, and other creators were relieved by the news last month that the Australian government had merely taken note of the recommendation and would begin a new round of public consultation on copyright exceptions in 2018.  The very high-profile campaign mounted in Australia by its creative industries may have dodged the bullet on this occasion, but no one there is complacent about the final outcome.

Wherever you look—India, Germany, Belgium, or Brazil—you can find evidence of judicial decisions profoundly hostile to the interests of content creators; decisions that offer no protection against systematic and unremunerated copying of educational and scholarly content; decisions that refuse to recognize publishers as legitimate rights holders for the purposes of receiving monies from copying levies; decisions that have the effect of widening the exceptions to and limitations on copyright.

The news is by no means all bad for our industry, but there are more than enough discouraging signs for publishers and authors.

The good news is that we are more alert to the problems than ever before.  Awareness has increased and so has effective action.

Individual companies and trade associations have stood up, shown real leadership, and fought for their own and the wider industry’s interests, committing significant time and money in the process.

That leadership and commitment deserves to be acknowledged and applauded.  But there’s so much more that needs to be done.

Be sure to join us at 10:30 a.m. at Frankfurter Buchmesse’s Business Club for “Toward a Copyright Manifesto for International Publishing,” a Publishing Perspectives Talk with Copyright Clearance Center’s Michael Healy and our guests.

And for more on issues raised in this article, we recommend: