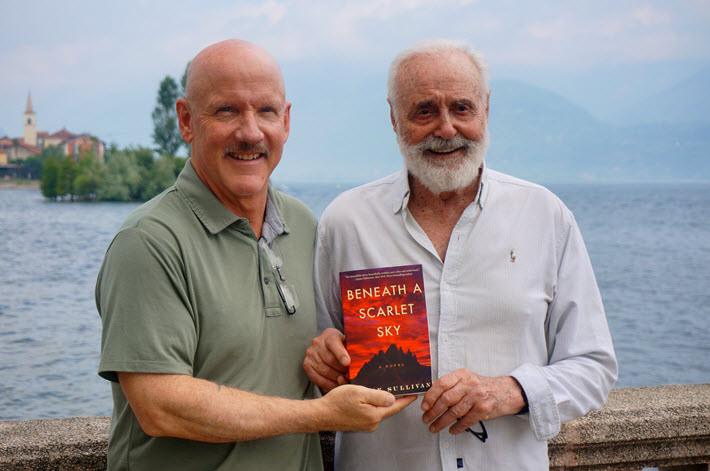 James Patterson collaborator Mark Sullivan’s labor of love may turn out to be his most successful book yet. In the run-up to Frankfurt Book Fair, the book has sold into 10 languages. 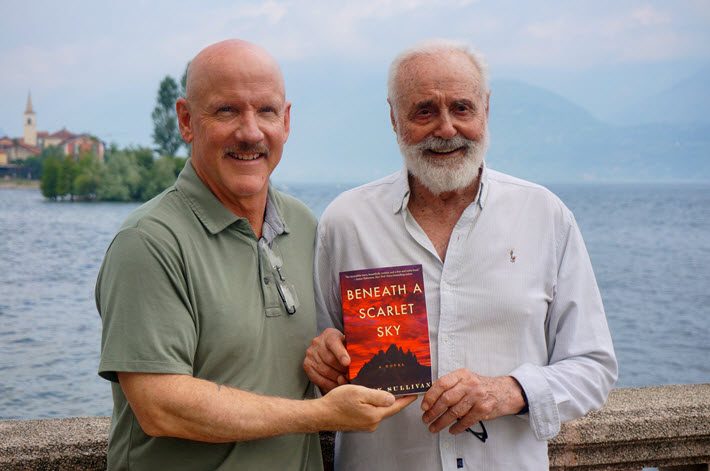 Time and timing give author Mark Sullivan‘s Beneath a Scarlet Sky the tempo of our era amid the urgency of wartime Italy. 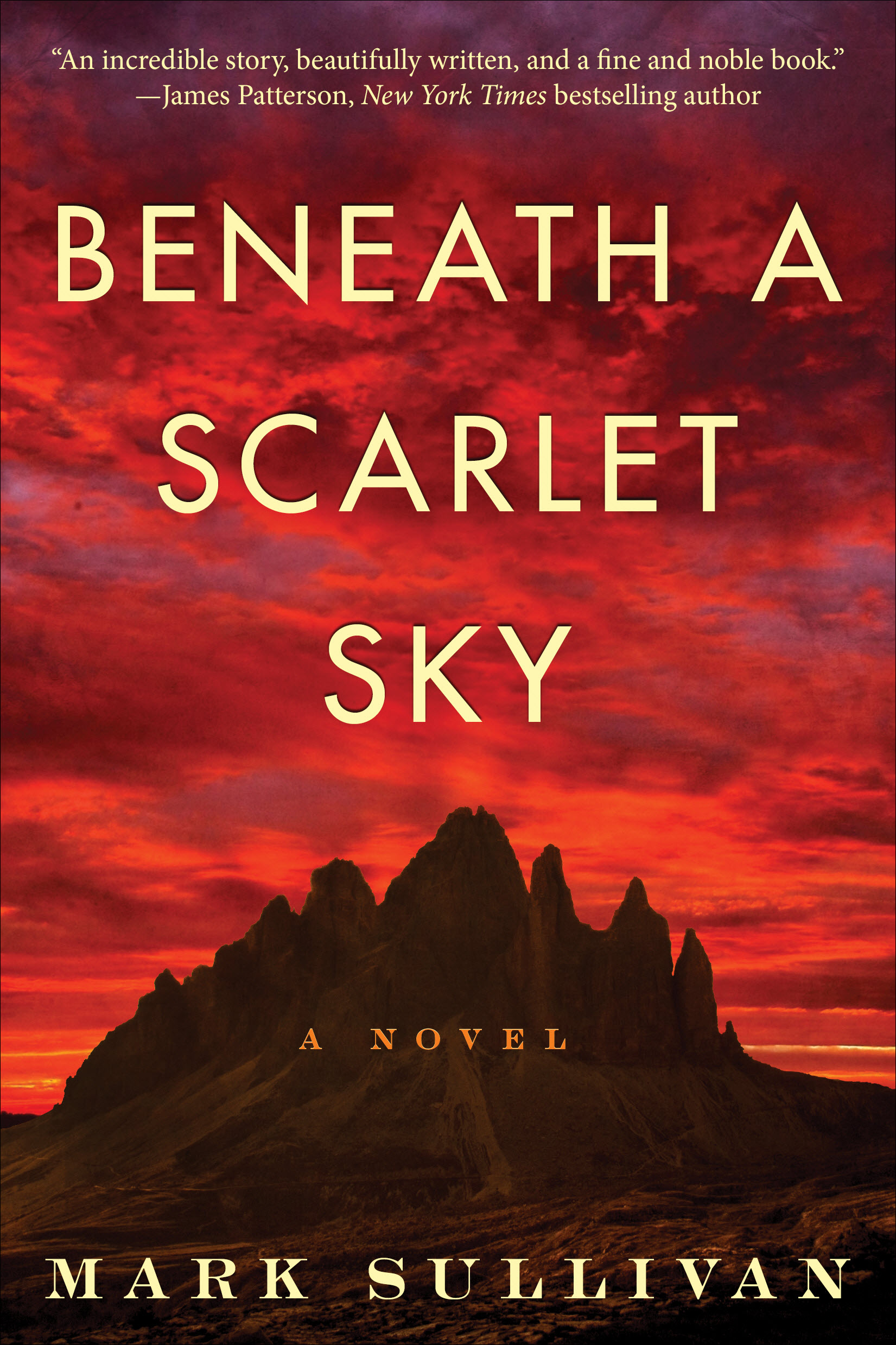 Sullivan is known best as one of James Patterson’s collaborators, their five books featuring “Private,” an elite security and investigation firm that gets into a lot of contemporary glam and grit. And yet Beneath a Scarlet Sky is a book that has taken him more than a decade to produce and is a departure—the kind of pivot in a major career that reassures the creative class there’s still such a thing as range for authors, even in today’s market.

“When you write a thriller, when you write a mystery novel,” Sullivan says in an interview with Publishing Perspectives, “you really write it with your head. There’s an intellectual game at work. But this book, I wrote with my heart. It was a very different thing.”

He makes this clear in the book’s prologue which describes a bad moment of his own. In 2006, Sullivan tells us, “I was 47 and at the lowest point of my life,” he writes. His younger brother, “who was also my best friend,” had died. Sullivan was in financial trouble. He was “worth much more to my family dead than alive.”

As he tells it, he was saved by his chance encounter with a story about a Milanese boy who rescued Jews in the Alpine snows of World War II.

While his swank hero Jack Morgan dashed around in his “Private” books with Patterson, Sullivan was going back and forth to Italy, meeting with an elderly Italian man named Pino Lella. Now in his early 90s, Lella was a member of the underground whose infiltration of the Nazis’ Italian operation gave him a chance to get Jews to safety at the Swiss border. 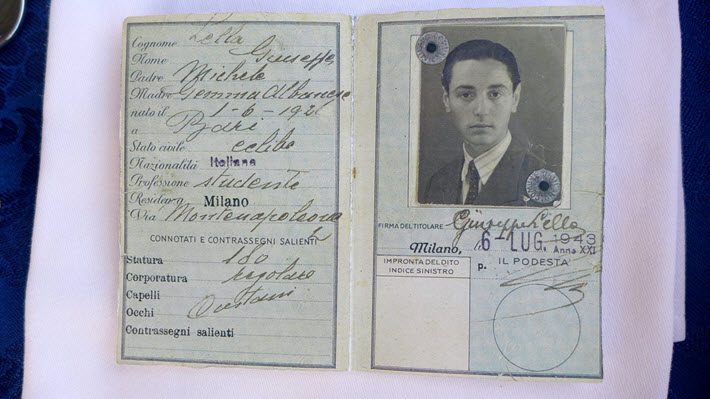 Giuseppe ‘Pino’ Lella’s papers at age 17, the age at which he became involved with the Italian resistance. Image: Provided by Lake Union Publishing

‘A Collective Amnesia’ and a Rights Rush

The book has found steadily growing press attention, from Sullivan’s hometown Montana paper, The Bozeman Chronicle, to Israel’s Jerusalem Post, which is trumpeting the news that producers Amy Pascal and Rachel O’Connor have bought the film rights to the story and have attached Tom Holland to the role of Pino. The project will take this team about as far from their Spider-Man: Homecoming success as Sullivan has ventured from Pattersonville.

For Holland, in fact, the role may be closest to his work as Brother Diarmuid in Brendan Muldowney’s rugged, relentless Pilgrimage. For Sullivan, the experience of researching, writing, and now watching the book find its footing in the market is clearly deeply satisfying.

Released May 1, Beneath a Scarlet Sky stands at No. 3 this week on Amazon’s Most Read Charts, having spent 18 weeks on those lists. On the USA Today lists, it’s been as high as No. 5 on the general list, and has hit No. 1 in Amazon’s weekly combined print and ebook list, as well as reaching the top of Seattle’s weekly ebook general chart.

The importance of that sale into Italy has to do with something Sullivan discovered when he began meeting with Lella and researching the man’s heroic adolescent wartime experiences: Italians don’t talk much about the war.

“Some 140,000 Italians died during Nazi occupation,” Sullivan writes in his prologue, even as 60,000 Allied soldiers died to free the nation. A “collective amnesia,” Sullivan calls it, today clouds the events of the 1940s like the smoke of burned documents.

This is why the Newton Compton translation should be meaningful to so many in Italy, a chance for readers there to engage with a past long obscured.

It also has to do with the reason that when this book charts, it does so as fiction.

‘This Story Changed Me’ 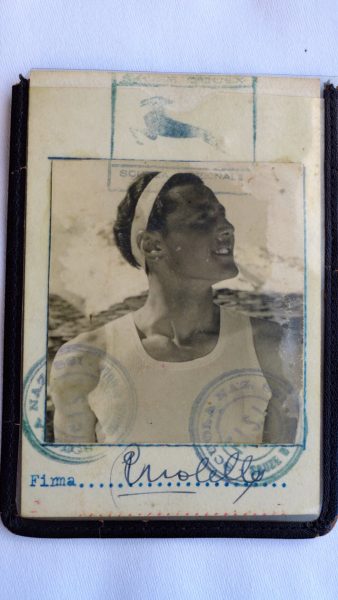 Although based on Lella’s actual experiences—with its details verified by Sullivan in years of on-site research—the writer made a decision to fictionalize the story. He found that Lella himself could no longer raise some of the terrors of his boyhood. Certain memories were just gone, as were many people of the time.

And readers are finding that Sullivan has taken good advantage of the gray areas to dust his story with the luminous haze of an Italy energized by the laughter of ragazzi. You meet Pino in 1943, three years before Piaggio would produce its first Vespa, true, but these boys are every bit the girl-spotting, mother-dodging weasels who still rip around the Arcade and buzz La Scala’s portico today. One of the headiest scenes comes early when Milan’s residents escape Allied bombings by heading out into the countryside, where there’s a tiny, impromptu performance of Nessun dorma on a summer’s evening.

Sullivan hooks you quickly by writing in a voice that seems a product of the period, something as sturdy as a Hardy Boys tale, every line as clean as a Helen MacInnes aside. The safety of such prose, as familiar as pasta, walks you into the darkness quicker than you can spell Mussolini.

And some are watching this book for another reason. Lake Union is one of Amazon Publishing’s imprints. If the film catches its crowd, if word of mouth continues to build, this could become a breakout for APub, the kind of hit that hasn’t come easily yet to the young publishing house.

“This story changed me,” Sullivan says, after he met Lella for the first time. “I left Italy 11 years ago, vowing that I was going to tell the story to as many people as I could.” He starts laughing. “I just didn’t think it was going to take me more than 10 years to do it.”

‘A Phantom of My Opera’ 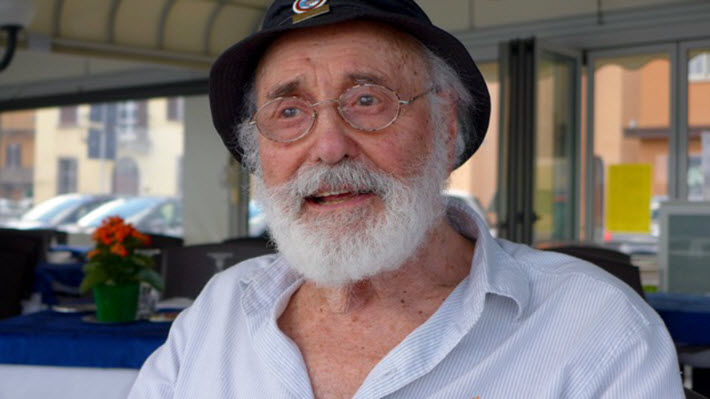 This photo, by Mark Sullivan, was taken during a conversation in which Sullivan told Giuseppe ‘Pino’ Lella what he had learned of Major General Hans Leyers’ fate. The conversation is described in Sullivan’s epilogue to ‘Beneath a Scarlet Sky.’ Image: Provided by Lake Union Publishing

“I would work and make money,” Sullivan says, “and I’d set aside some so I could go back to Europe” to research Beneath a Scarlet Sky. “I’ve come to understand over 30+ years of writing that some books come out in six months and some take 10  years.”

Sullivan has a background in journalism, having studied at Northwestern’s Medill journalism school and worked for Reuters and the San Diego Tribune, good training for his ability today to synthesize a story from small clues and old memories.

As his prologue sets up his introduction to Lella, an extensive “Aftermath” at the end of the book lays out many elements of where things lie in reality, including the Lella family’s involvement in Milan’s fashion industry–and Lella’s own doubts about how successful he’d been as a spy: had he been transparent to the Reich’s Major General Hans Leyers?

“The story is framed, of course, with my story at both ends,” Sullivan says in interview, and that includes his tracking down of Leyers’ daughter near the end of her life and learning what became of the indicted war criminal who left Lella at a border crossing. Lella would later call Leyers “a phantom of my opera right to the end.”

In this, Sullivan’s approach will remind some of The Cold Summer, in which Gianrico Carofiglio created faux police records so detailed that many readers believe they’re authentic.

“I know enough about being a journalist,” Sullivan says, “to know that once I started making informed assumptions, I was writing fiction–even though it was as close to what happened as I could come.”

Sullivan says that Pino Lella continues to “blow my mind. He rides a mountain bike, and he’s 91,” Sullivan says.

‘The Best Publishing Experience of My Life’ 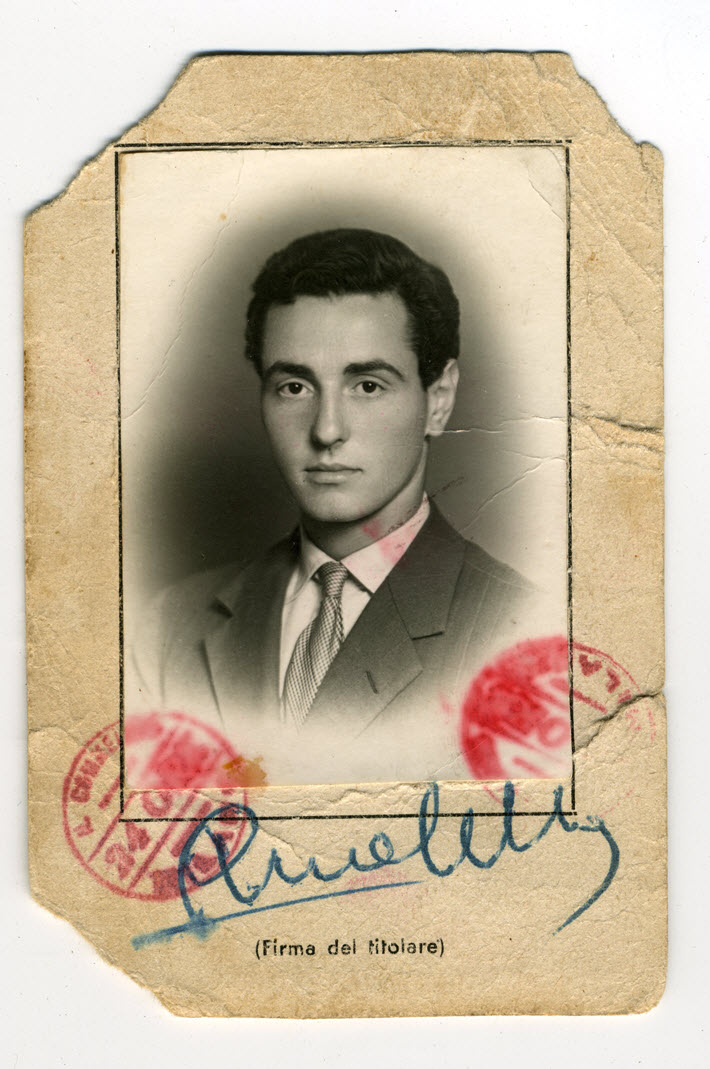 And Sullivan, who has 18 books to his name overall, can’t say enough about his experience with Lake Union: “Without a doubt, the best publishing experience of my life.”

Sullivan has worked with Little, Brown and Minotaur and Atria and others. He has no bad words for those houses, but he’s adamant in his praise for Lake Union. “They’re so professional. They’re so smart. My acquisition editor, Danielle Marshall, she got it when people in New York didn’t. She embraced it. And when I set out two years ago to write the book, I wrote down that I wanted an editor who was as passionate about it as I was and a publisher who could put it into as many hands as possible.

“They had me work with a developmental editor,” David Downing, “and he was first class, pointing out things that after 10 years of work on this, I just couldn’t see any more. He made the whole thing 20-percent tighter.

“And then it was nominated for the Kindle First program, and I think we had 310,000 people download it in that month. In my family and Pino’s family, we knew it was a great story. But it’s been very gratifying and humbling that people have embraced the journey of this story.

“I didn’t know I’d enjoy writing historical fiction. But I do. And I’ve found out I’m good at it. I’m in a good situation. I love working with James Patterson. The guy is great. So I do that and it allows me to work on passion projects” like Beneath a Scarlet Sky.

Something essential in Sullivan’s own writing voice has been opened by this project, he says. “Always, if I’ve had a choice to describe the wallpaper in a scene or the emotion, I’ve gone for the emotion.” And this book has shown him that there’s a market for his instinct.

“That’s the reason people are responding to the book. I think that’s it.” 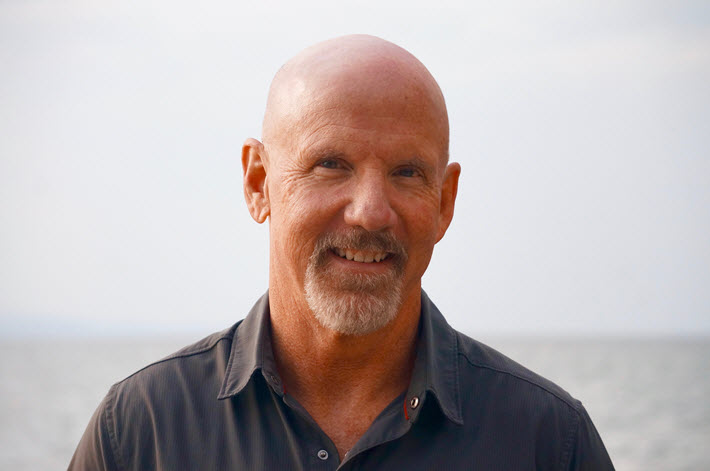