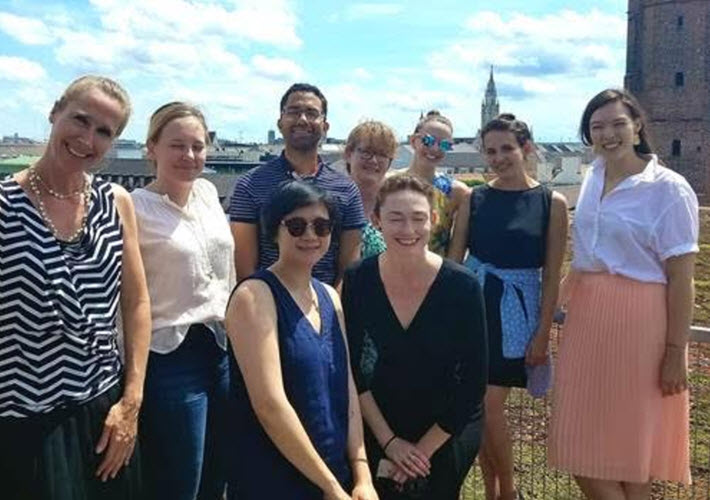 During the annual Frankfurt Book Fair New York Editors Trip this summer, some of the hottest German children’s books of the season came to light. 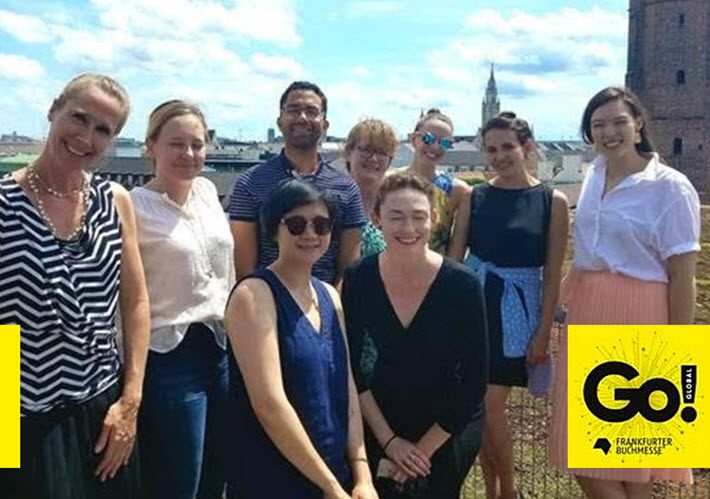 This summer, as announced in Publishing Perspectives, four children’s book editors from the US, three from Canada and one from the UK explored Germany’s publishing scene on the annual Editors Trip led by Frankfurt Book Fair New York’s Riky Stock.

The touring editors met with publishers, in Germany, as well as with fellow editors, rights directors, agents, illustrators, and booksellers.

While they learned about Germany’s book industry and some 20 publishing houses—from large ones such as Carlsen and Ravensburger to small ones such as Tulipan and Knesebeck—they also were pitched children’s literature currently selling well in Germany.

One of the Canadian participants, Karen Li of Owlkids Books, had a cogent observation about the international mix of kids’ books on the German market, saying, “I was surprised by the percentage of foreign translations on German lists. It’s interesting, particularly from a Canadian perspective.

“One of the biggest challenges in our native publishing industry,” Li said, “is how to avoid being culturally swallowed up by American culture. I had a great conversation with one editor about how Germany’s history might inform a reluctance to beat the drum for encouraging writers from a purely nationalist standpoint.” 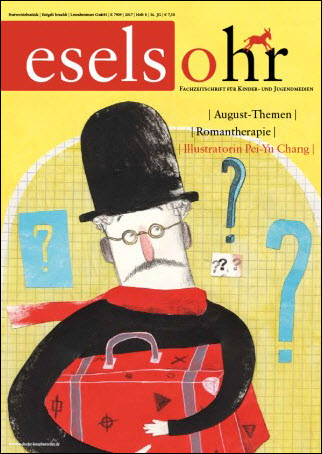 In order to get a look at some of the leading titles of the season for children in Germany this autumn, Sylvia Muecke, editor at children’s book review magazine Eselsohr (the word means “dog-eared”), here provides us with her commentary on significant books, authors, and illustrators the group encountered during the trip.

These are Mueke’s opinions and recommendations, which may include interesting picks for industry players who’ll be at Frankfurter Buchmesse, October 11-15.

We turn the article over, then, to Muecke, with our thanks. And she starts us off with board books from three illustrators. So leicht, so schwer (So Light, So Heavy)
Peter Hammer Verlag, ages 2 and older

I’d like to introduce you to Susanne Strasser, an artist who has become well-known for her board books, especially in the last three years. Her So leicht, so schwer finds light words and pictures for an elephant’s wish to see-saw. This is my hands-down favorite among all of last year’s new releases.

Strasser manages to captivate children, and the adults who read to them at the same time. Her text and illustrations are expressive and to the point, and she artfully plays with our expectations, touching us deeply and surprising us again and again.

Strasser has also published So weit oben (So Far Up) and So müde und hellwach (Very Sleepy and Wide Awake), also with Peter Hammer.

Moni Port is another board-book virtuoso. In Es gibt keine Kinder  and Ein neuer Freund she creates an upside-down world—it’s not a child who’s afraid of monsters, but the reverse. 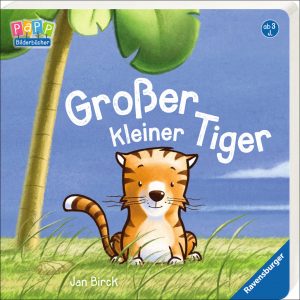 My final board book recommendation is Großer kleiner Tiger.  Jan Birck takes on the standard themes of numbers, animals, and colors, and then he adds his special touch. Readers will enjoy how the board book plays with perspective, with an energy and sense of humor that leaps from every page.

There’s also Flätscher–Die Sache stinkt (What a Stinker) and Flätscher–Krawall im Kanal (A Rumble in the Tunnels)  from dtv Verlag Junior, ages 8 and older, the bestselling first and second books in an irreverent series about a mischievous skunk. 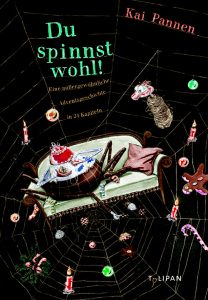 Du spinnst wohl (You Must Be Crazy)
Tulipan Verlag, ages 4 and older

Du spinnst wohl (You Must Be Crazy) is a one-of-a-kind advent calendar story.

Its sequel, Mach die Biege, Fliege (Bye-Bye, Fly)  depict the improbable friendship between a spider and a fly who was originally supposed to become the spider’s Christmas dinner. 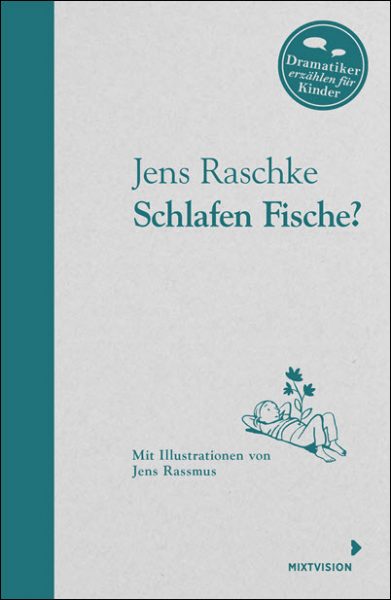 Animal tales, father-son stories, sensitive themes. Jens Rassmus does it all, winning over readers every time.

The undersea story collections Party im Walfischbauch and Ein Pflaster für den Zackebarsch are particularly noteworthy, as is the charming father-son story Das brauch ich alles noch (I Still Need All of It) from Tulipan Verlag for ages 3 and older.

Rassmus can create heartfelt illustrations for the words of other authors as well as for his own writings. Schlafen Fische? / Do Fish Sleep? from Mixtvision for ages 8 and older) is at once the most poignant, and the most comforting, story about the death of a sibling that I’ve read in years. 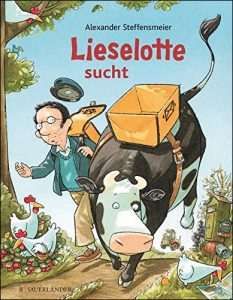 Alexander Steffensmeier’s Lieselotte is an absolute bestseller wherever German is spoken, from board books and picture books, to all kinds of other related merchandise (all from Fischer Sauerländer). 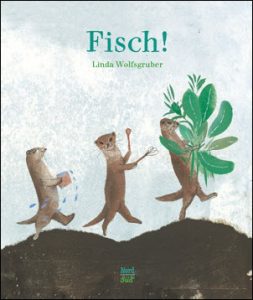 Linda Wolfsgruber has given us a classic comedy about five otters and a fish.

Pacing, suspense, and a surprise twist at the end—everything here is just right.

This picture book will have you laughing and trembling with suspense. With just a few, well-placed words, it’s a delight for reading aloud. 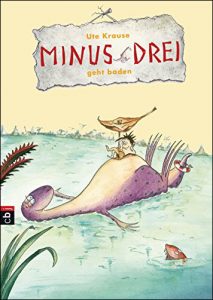 Ute Krause’s series  about a small dinosaur and his human pet Lucy is another book well-suited for reading aloud as well as for beginning readers.

The illustrations and short, to-the-point sentences fit seamlessly with one another and make every title in the series a rib-tickling pleasure. 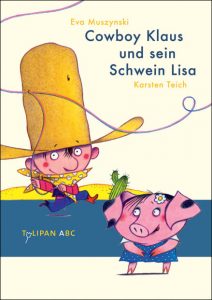 The tongue-in-cheek Cowboy Klaus series by Eva Muszynski and Karsten Teich is a hit among beginning readers.

This winking depiction of cowboy life and a reluctant hero have delighted both boys and girls for years. For many children, this series makes reading irresistible. 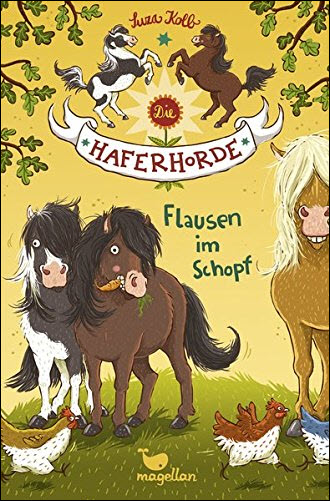 Believe it or not, there’s something new in the world of horse books.

The series pleasantly rises above other examples of its genre. Absolutely worth a look. 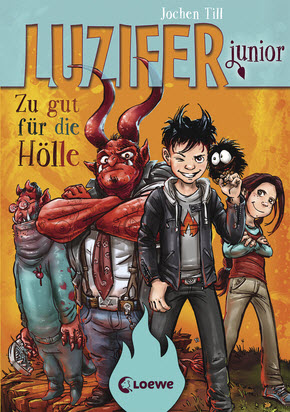 Jochen Till introduces us to the son of the Devil, who is sent by his father to a school for humans–so he can finally learn how to be evil.

The enthusiastic response among German readers is well-deserved, and the series will certainly spark interest elsewhere. 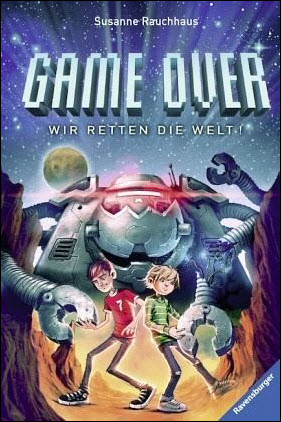 Game Over: Wir retten die welt (Game Over: We Save the World)
Ravensburger Verlag, ages 10 and older

You won’t be able to put down Susanne Rauchhaus’ Game Over: Wir retten die welt.

The two protagonists narrate their shared gaming adventures, completing and continuing each other’s thoughts and interrupting one another impatiently.

The book works beautifully, and is highly entertaining. For me, it might be the surprise of the spring. 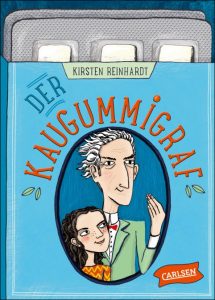 Kirsten Reinhardt’s Der Kaugummigraf is a special book, an intimate drama with only two characters, an eccentric old man who has a chewed gum collection and a child who has lost her parents. 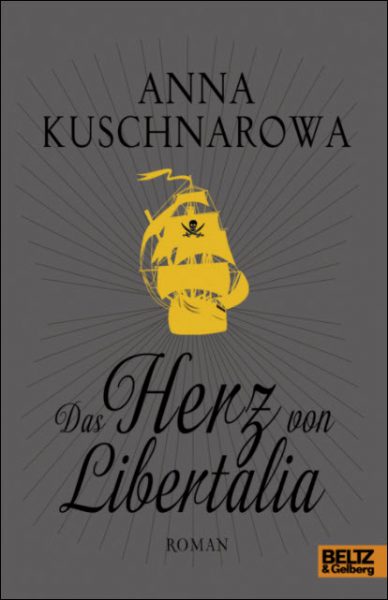 Set around 1700, it tells the engaging story of a young Irish woman, born a bastard and raised as a boy in the colonies. She doesn’t bow to conventions and stays true to her dreams, even when it means leaving home and becoming a pirate.

I’ll conclude by mentioning some up-and-coming talents and other relative newcomers in German YA literature, writers worth watching.

Radiating an awareness of the wider world, even when they deal with “specifically German” themes, these authors have enriched the field of German-language literature for young readers.