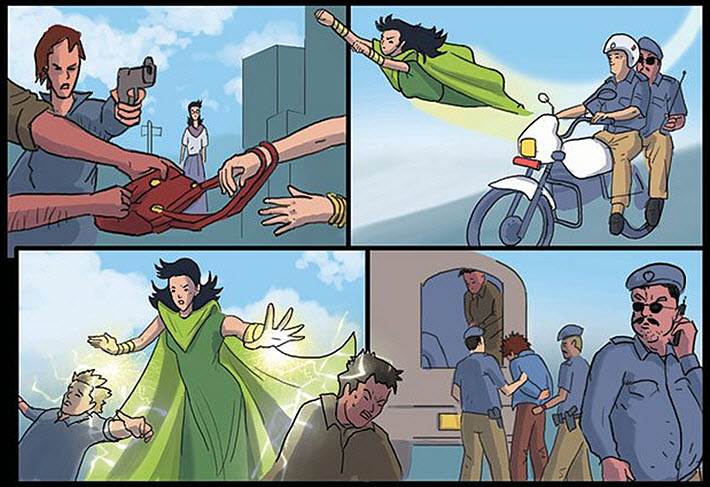 From The Express Tribune: First there was ‘Pakistan Man.’ Now, ‘Pakistan Girl’ has flown in to stand up for what’s right and to promote women’s empowerment. 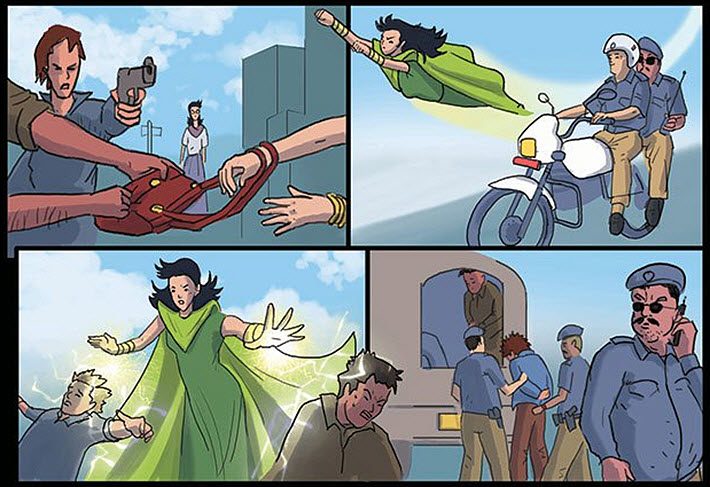 As reported by The Express Tribune, Pakistan has its first female superhero comic book, Pakistan Girl. 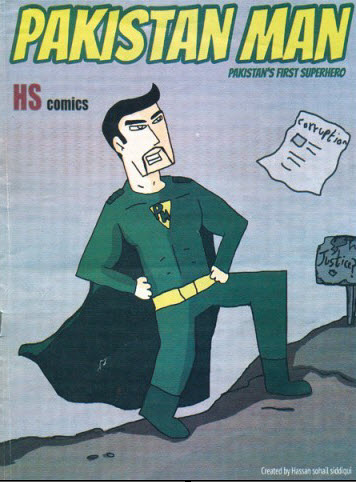 The creation of Hassan Siddiqui, a graphic designer and art director from Islamabad, Pakistan Girl tells the story of Sarah, a typical young Pakistani girl who loves to read, take care of her pet cat, and hang out with friends. The comic is published by Siddiqui’s company, Capital Comics, which was founded in 2014 and publishes what the company calls “unique Pakistani art and comics for the general public and wider audiences.”

But after what’s described as “a confusing period in her life,” Sarah discovers that she has hidden powers, and puts them to work helping people and serving as a “defender of peace.”

Her goal, according to promotional materials picked up by The Express Tribune,  is “to provide people with hope” and to inspire both girls and boys to “be strong and stand up for what’s right.”

That, reports The Express Tribune is the comic book’s motto, “alongside promoting women’s empowerment.”

Siddiqui says that his previously released Pakistan Man comic has led him to launch a female hero in a country in which action heroes have normally been male.

He tells the paper, “We wanted her to play a role in gender equality by having a cool female superhero on the front cover of a book. The message of the comic book is that women can also be strong superheroes doing the work that’s presumably done by men.

“This young girl is relatable to any and every Pakistani girl who isn’t afraid to speak her mind.

“Pakistan Girl will open even more opportunities for women heroes to be appreciated as inspirational role models in Pakistani society.”

Pakistan Man reportedly has been ordered by collections at Harvard University and the Library of Congress in the United States, and is said to be popular among schoolchildren in Islamabad and Karachi.

Launched this month with artwork by Ali Hyder, Pakistan Girl is to be available in bookstores and cafés in Islamabad and Karachi.

In an earlier article at The Express Tribune about his first comic series, Siddiqui told Jahanzaib Haque, “HS Comics was launched on Facebook in 2011.

“Facebook is a great way to show your art to people. It’s a very important tool for any artist to start-up because it gives you instant feedback from your fan. You also have to be careful not to make mistakes in your work and deliver something on-trend.”

You can see more images from ‘Pakistan Girl’ in the article from The Express Tribune here.