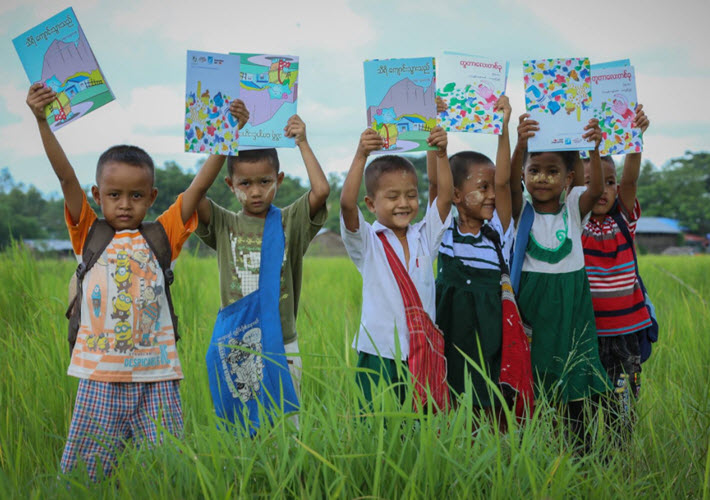 From Frontier Myanmar: ‘A complete collection of all our child-authored books’ is part of the reading program one literacy-based charity delivers to kids. 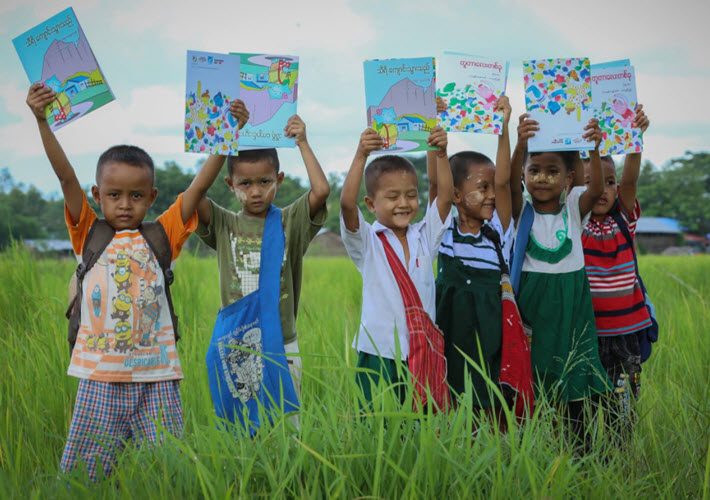 ‘So Excited To Own a Book’

The first of these foundations is called Yinthway—meaning “our beloved children.” It was launched in 1999 as the Network Early Child Resource Center, and since then has published more than 100 books.

The vast majority of Yinthway’s books are written for children under the age of five, Sing Lee reports, although some are aimed at readers in primary schools. Among the titles, 19 are books which Sing Lee describes as being both written and illustrated by children at Yangon International School. They’re based on traditional tales of Myanmar mythology.

Daw Nwe Nwe Aung, executive director of the Yinthway Foundation tells Frontier, “Children are our future. We tell them stories to teach them to build a peaceful society, a peaceful country, and a peaceful world.”

Third Story Project, is a similar nonprofit working in the space, a social enterprise creating, publishing, and disturbing its own titles to help provide positive reading for the children of Myanmar.

Founded in July 2014, eight of Third Story’s 30 illustrated books published to date were developed out of creative writing classes at schools and libraries nationwide, Sing Lee writes. Those titles were selected from among hundreds of tales that children submitted after being exposed to storytelling prompts from the Third Story Project staff.

Ma Ei Pwint Rhi Zan, project director at Third Story, tells Sing Lee, “The children whose stories are selected receive a giant gift, including a complete collection of all our child-authored books.”

The project developed from an English writing class for university students, teachers, and journalists. Those classmates decided they wanted to work as volunteers to make a difference in their communities, and the initial effort was named after the Thone Htat Kyaung, or Three-Story Monastic School–the Yangon venue for the classes.

As it turns out, in many cases, organizers find that the parents of the children who get Third Story’s free books may be the biggest beneficiaries. Ma Ei Pwint Rhi Zan tells Frontier, “In Shan State, even some of the parents have never owned a story book and they want one too. The children are so excited to own a book that they send pictures of themselves with their books.” The parents are encouraged to participate in the program, asking the children questions about what they’ve read.

Mindy Walker, an American volunteer advisor to the Third World Project, says that their books are an affordable alternative to translated titles, with the added bonus of being stories in a Myanmar context, and local languages.

Third Story has distributed more than 160,000 books in the Burmese language, and some 30,000 in ethnic languages spoken in the region.