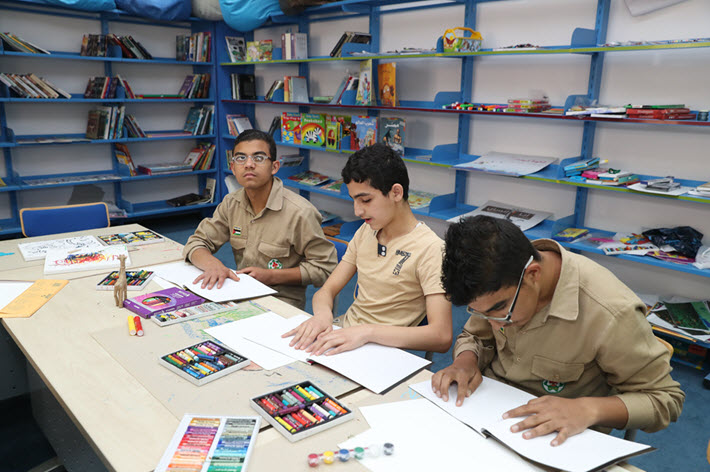 Today (August 28) is Emirati Women’s Day, and the Kalimat Foundation and its programs are led by women, including Ara, a new initiative for reading accessibility in the Middle East and Europe. 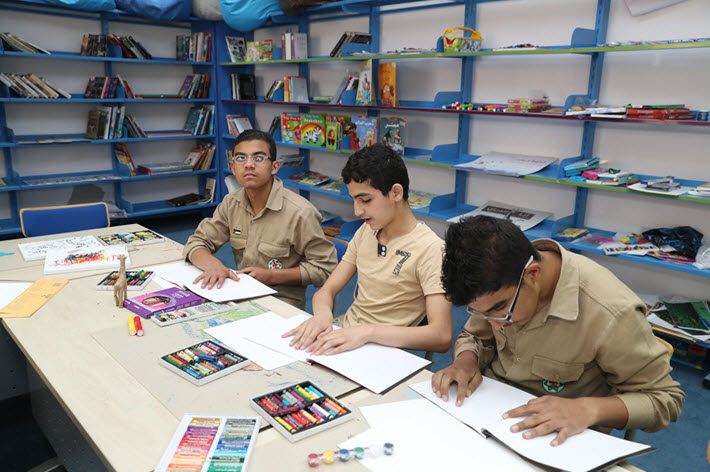 Last weekend, the United Arab Emirates’ Board on Books for Young People organized an event in which young readers were taught to summarize what they’d read and describe it without using a word.

As part of an eight-week Silent Book Exhibition, they drew pictures under the direction of Sharjah Libraries personnel, reflecting three titles in the exhibition’s 54 wordless picture books from 18 nations.

Joshua Dunning, who directs international projects for the Books for Young People program, in a prepared statement, said, “The books in this collection come from five continents and provide not just children, but also artists, designers, illustrators and publishers in the region with a sweeping overview on the world of wordless book publishing.”

“Visual literacy” is the key term here, in what turns out to be another of the many initiatives established by the UAE’s Sheikha Bodour bint Al Qasimi. And the goal of the exercise is to help young people develop critical thinking by making them conscious of the options they have when they interpret what they see.

In an interesting parallel, children who don’t see are at the center of another Sharjah program for young readers.

Ara in Arabic means the ability to see. And the Ara initiative is a newly created outreach program designed to bring children who are sight-impaired into the steadily widening embrace of Sharjah’s multi-tiered literacy programs.

These efforts to cultivate the capabilities of both the sighted and the sightless are powered by the Kalimat Foundation for Children’s Empowerment. And these are among the programs that UNESCO’s Irina Bokova has praised while naming Sharjah the World Book Capital of 2019. 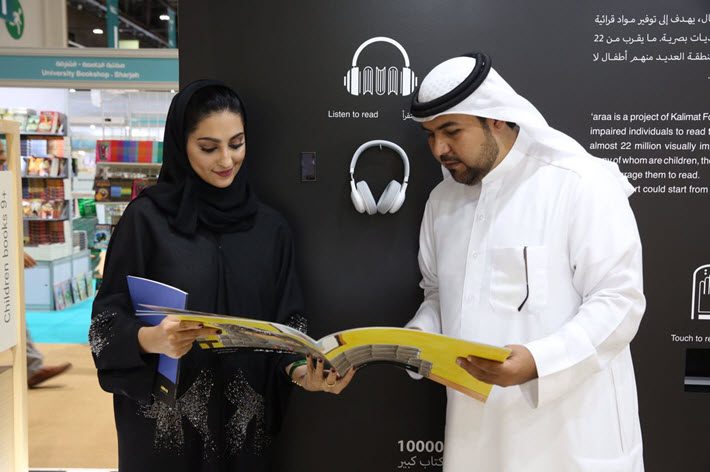 Reading for Refugees and Trauma Treatment

“There’s never enough data or expertise brought together in this field, and we want to bring them all together.”Amna Khamis Al Mazmi

The foundation is young, relative to the decades-long emphasis on building a reading culture led by Bodour and her father, Sharjah’s ruler and historian, the Sheikh Sultan Al Qasimi. Opened last year, the foundation bears the same name as Bodour’s publishing group: Kalimat translates to the word.

And one of the key missions of the Kalimat Foundation is to provide literary responses to children in parts of the world impacted by war and other conflicts.

Amna Khamis Al Mazmi, manager of Kalimat Foundation, in comments to Publishing Perspectives, says the foundation “takes books into refugee camps where it supports trained staff who use reading-based therapy to help traumatized children.” It also sends books into educational hubs, libraries, and schools in highly populated urban centers where resources are challenged.

This year, the foundation, says Al Mazmi, has worked to develop wordless picture books—those “silent books”—for children in European refugee communities, while ramping up another effort to “provide as many books as possible,” she says, “to get libraries in under-privileged communities running again.” That effort is called Libraries in Need.

Al Mazmi cites surveys showing that the Middle East and North African region (MENA) may include as many as 22 million people whose vision is compromised to some degree. “It’s about time we cater to their reading and knowledge needs,” she says.

“One important goal that the Ara initiative wishes to achieve is the creation of a network between all entities that serve visually impaired children in our region.” That might include academies and schools, community centers and public libraries.

“These young people need us to be looking for practical solutions that empower them to engage with the educational process, the same as their sighted peers.”Amna Khamis Al Mazmi

As it turns out, Braille, audio and large-print books, Al Mazmi says, are rarely found in the Gulf region, which is one reason that Ara engaged in a program at Jordan’s Amman Blind Academy. There, she says, “There were plenty of books for religion and science but no story books at all. You should have seen the look on the children’s faces, reading a story for the first time.”

The Jordanian academy now has asked if Ara can deliver adventure stories and YA literature for sight-challenged readers.

The school was given 150 books for students with limited sight, while 250 of the specially made titles have gone to the Emirates Association for the Visually impaired. But in addition to an initial distribution of 30,000 copies of a collection of books in Braille, audio, and large-print at the time Al Mazmi and the Kalimat Foundation introduced Ara in April at the Sharjah Children’s Reading Festival, the initiative is also set up to begin gathering verifiable data on the scale of the need in the region.

“There’s never enough data or expertise brought together in this field,” Al Mazmi says, “and we want to bring them all together.”

During the launch of Ara at the reading festival, the program set up an installation to demonstrate some of the approaches available to assist visually challenged readers. Part of the program’s approach is to raise awareness of both the hurdles many children face without full visual capacity and some of the ways content can be produced to help them.

“These young people need our full support, advocacy, and solidarity,” Amna Khamis Al Mazmi says. “And most importantly, they need us to be looking for practical solutions that empower them to engage with the educational process, the same as their sighted peers.” 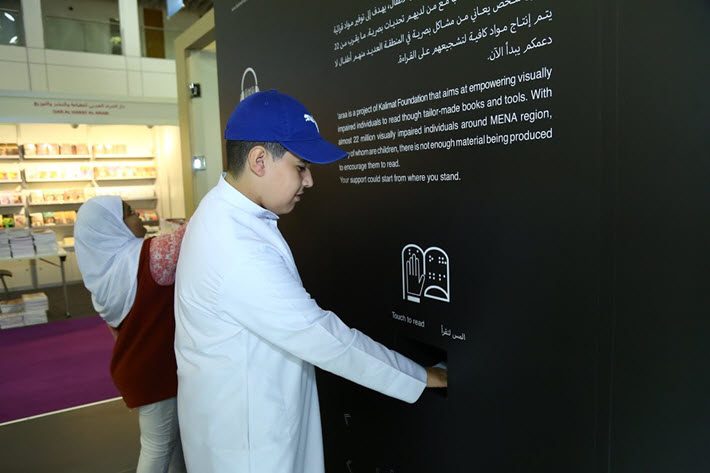 Bodour Al Qasimi is joined at Frankfurt Book Fair by the Quarto Group’s Marcus Leaver and Bloomsbury’s Nigel Newton in a Publishing Perspectives Talk on the Kalimat publishing house’s approach to international business and translation exchanges. The session is at 10:30 a.m. on October 11 at Buchmesse’s Business Club, which has a 20-percent membership discount available through Thursday (August 31).