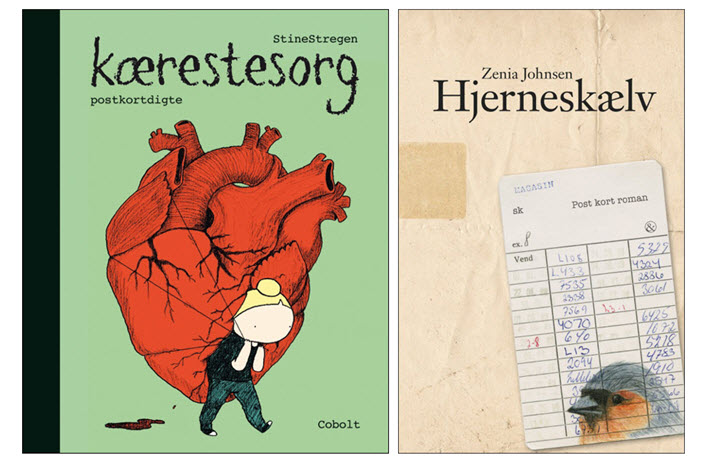 ‘The readers feel the book was written to them,’ says one of two authors of ‘postcard books’ in Denmark, books ‘sent from somewhere unknown. Nobody expects an answer.’ 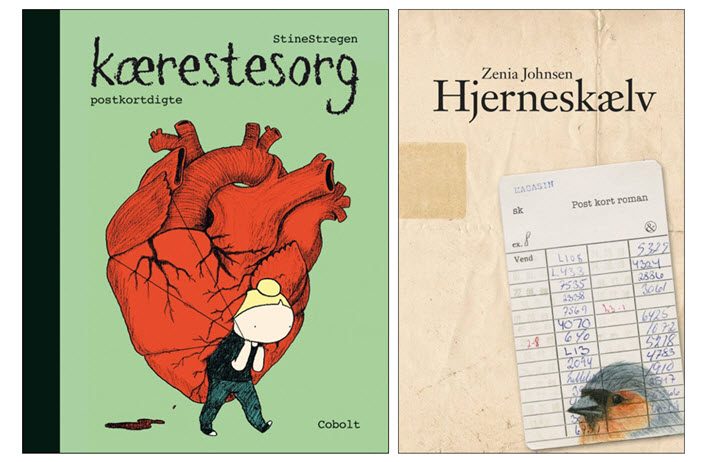 Stine Spedsbjerg’s ‘Heartbreak,’ left, and Zenia Johnsen’s ‘Brainquake’ are postcard books, experiments in poetry and fiction by the two Danish authors and their publishers

If you’re familiar with the 1990s ‘Griffin and Sabine‘ work of Nick Bantock, you’ll know the appeal of two Danish publications devised as ‘postcard books.’ Bantock’s stories, from Chronicle Books, are told in letters the reader removes from envelopes. In Zenia Johnsen’s and Stine Spedsbjerg’s ‘postkort’ books, publishers Cobolt and Jensen & Dalgaard are embracing another epistolary approach with that odd sense of intimacy found in Bantock’s books. —Porter Anderson

Last year, Denmark saw two autobiographical titles published as a series of postcards—individual messages, which together create a complete narrative.

“Postcards are most often a greeting or a sign of life sent to one person or maybe a few people. The recipient is somebody, not just everybody.”Zenia Johnsen

And independent publisher Jensen & Dalgaard published Zenia Johnsen’s Hjerneskælv (Brainquake), a postkort roman or “postcard novel” composed of short descriptions of life in recovery from a concussion. Johnsen’s book is illustrated by her own snapshots.

Both authors have substantial followings on social media. Spedsbjerg started out her storytelling career with an autobiographical digital comic strip StineStregen (Stine, the line), published as a blog. Later she moved on to Strictly Stine. Johnsen—who before her concussion worked as a librarian, a publishing consultant, and a reviewer of children’s literature—also has a popular personal blog, zenia.dk.

Publishing Perspectives spoke with the two authors and their publishers, asking what it is about postcards that makes them interesting as a narrative framework. 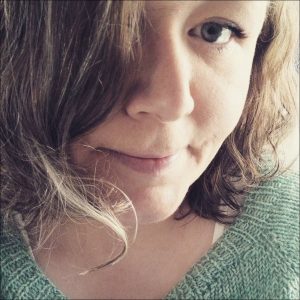 “I think the postcard format allows for a more personal, intimate reading experience,” Zenia Johnsen says. “Postcards are most often a greeting or a sign of life sent to one person or maybe a few people. The recipient is somebody, not just everybody.

“Furthermore,” she says, “the format encourages you to write in a very precise and highly compact way. There’s no room for descriptions. You have to prioritize carefully.” 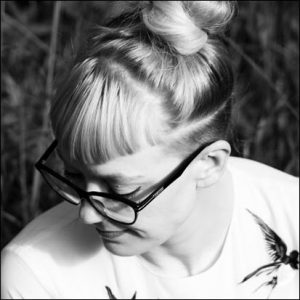 Stine Spedsbjerg talks of the travel context to which postcards are frequently related. “Postcards,” she says, “are sent from somewhere unknown to the recipient–a temporary residence for the sender. And nobody expects an answer.

“The compact format allowed me to cut to the bone of each feeling that I wanted to convey: I tried to expose the feeling in its pure form, thereby allowing the readers to recognize themselves. I was also directly inspired by those postcard collections you can buy with motifs from [for example] an artist’s work, often bound together so you can tear out the cards.”

In fact, that detachable-card format is how Spedsbjerg’s book is produced. Every card can be removed, written and mailed away, if you have the heart to part with it.

‘Well-Suited to Our Time’

Spedsbjerg’s editor at Cobolt, Pernille Arvedsen, says, “The postcard book is something special due to its tactility and its nostalgic connotations: writing letters and postcards is a dying genre. The postcard book can be seen as an attempt to retain the analogue handwritten text.” 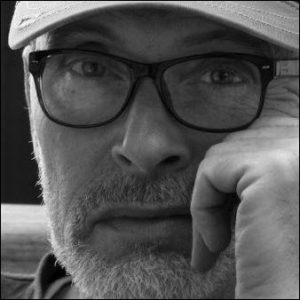 “We live in a time when everything must be done so fast,” he says. “Nobody writes postcards anymore.

“We were happy to publish something with this postcard flavor and I hope we inspired people to slow down, maybe even to write a postcard themselves.”

Cobolt’s Arvedsen points out, however, that “At the same time, the postcard is a rapid format, and thus well-suited to our time. It takes no time to read, and if you feel like studying it closer, you can easily revisit.”

In Johnsen’s book, both form and content relate to the postcard idiom. For example, the book’s French flaps can be detached, and one of them is an actual postcard.

Images from author and illustrator Stine Spedsbjerg’s ‘Heartbreak, a book of ‘postcard poems’

“The reactions to this were overwhelming. Mail, social media messages, letters, and postcards. The readers feel the book was written to them.”Zenia Johnsen

Arvedsen says she found it both a pleasure and an advantage to work in this hybrid format. It was an opportunity to tell new stories,” she says, “to readers, as well as to the press. As we’ve worked a lot with the book’s construction and effects, it has special qualities that I like presenting.”

Neither of the books was given significant review treatment by mainstream media. Jensen takes this in stride, saying that it’s often difficult to attract critical attention when a genre isn’t clear. “We had similar problems with a book that was published as a stack of loose sheets in a box,” he says.

Spedsbjerg says that some reviewers who did engage with the content found the format challenging. Because she’s known as a comic strip artist, specialized sites for comic lovers reviewed Heartbreak and their expectations didn’t match what they found.

“None of them liked that we used the term ‘postcard poems’ on the book’s cover,” she says, “while categorizing it as comics. One reviewer was downright furious about it, exclaiming that ‘This publication has nothing to do with comics whatsoever.’ However, he ended up admitting that he very much liked it despite this ‘outrageous’ fact.”

“Postcards are sent from somewhere unknown to the recipient–a temporary residence for the sender. And nobody expects an answer.”Stine Spedsbjerg

Reader feedback, however, has been welcoming for both titles.

Johnsen says, “Brainquake was my fourth book. I’d received some–but not a lot of–reader feedback for the first three. The reactions to this one were overwhelming. Mail, social media messages, letters, and postcards. It must be because of the format’s more personal and intimate character. The readers feel the book was written to them.”

Heartbreak got a lot of positive reader feedback, too. “Most people are touched by the theme,” Spedsbjerg says. “The book sort of gets to them.

“Those who mention the format explicitly are very positive. Many have told me they’ve given the book as a present to heartbroken friends. I think a reason could be that it can be quickly browsed, it has a kind of happy ending, and it demands no effort from the reader, because it’s so short and precise.”

When asked if they plan to publish more postcard books, neither of the publishers have concrete plans as yet, but both say they’d be willing to revisit the format.

The authors are more emphatic.

“I really love working with something as compact as this,” Spedsbjerg says. “And my readers and publisher like to see me experimenting. I bet they’re waiting to see what my next experiment will be.”

And for Johnsen, the pleasure is in the demands of a constrained context. “I  find it very motivating to work within a well-defined framework like the postcard,” she says. “So now I’m likelier to write something governed by a rigid format than a more traditional novel.”