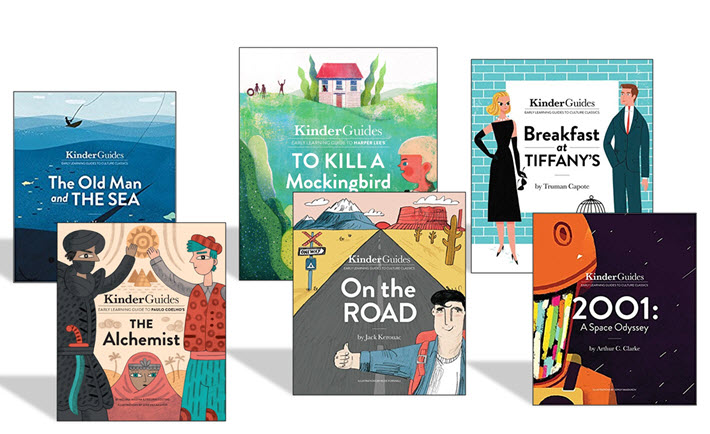 In an interesting copyright case, children’s books based on great literature are ruled by a US district judge to be infringing on copyright, although as yet, a legal opinion hasn’t been issued. 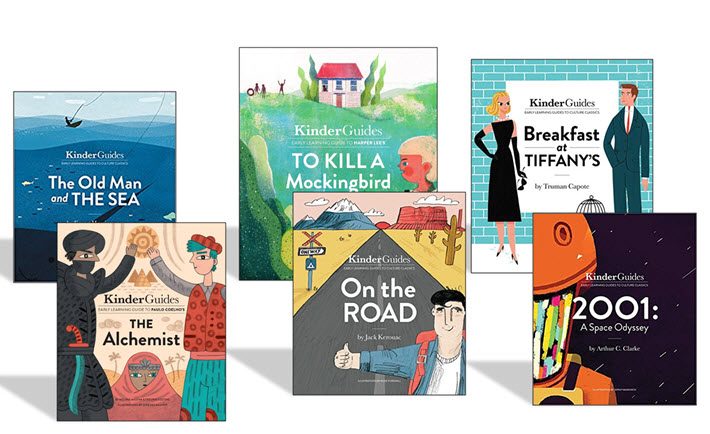 Here are six relatively contemporary titles in the Moppet Books KinderGuides series. The Hemingway, Capote, Kerouac, and Clarke titles were represented in the lawsuit this year.

The jointly released statement from Penguin Random House and Simon & Schuster express satisfaction with the August 1 decision of US District Judge Jed Rakoff in their favor.

This is the case in which the court has said that Moppet Books‘ KinderGuides treatments of Truman Capote’s Breakfast at Tiffany’s, Jack Kerouac’s On the Road, Arthur C. Clarke’s 2001: A Space Odyssey, and Ernest Hemingway’s The Old Man and the Sea infringe the copyrights in the original works.

In the KinderGuides case, the defendant claimed their usage of the original content was fair: These are not copies made of the original titles but unauthorized, re-conceived treatments of them for children.

At the time of writing this article, KinderGuide editions of the late Harper Lee’s To Kill a Mockingbird and Paulo Coelho’s The Alchemist (both HarperCollins) are still visible on Amazon, but listing as currently unavailable. The HarperCollins titles seem not to have been involved in the court case this year.

None of the four KinderGuides works specifically contested in the lawsuit is available at the moment, either at retailers or at Moppet Books. On the company’s website, the only KinderGuides editions available are based on public domain works, including Jane Eyre, The Odyssey, and Pride and Prejudice.

As Alexandra Alter at The New York Times points out, the KinderGuides’ basic concept seems “far-fetched,” her apt term, in that these hardback books are supposedly created for kids who are just learning to read. “Distilling the works of literary giants into highly condensed, brightly illustrated picture books for elementary school children,” she writes, “raised obvious pedagogical questions. (Can a 6-year-old reader appreciate Hemingway?)”

The defendant in the case, Colting, is a Swedish author who has been involved in copyright controversy before, having been barred by a court decision against publishing an unauthorized supposed sequel to JD Salinger’s Catcher in the Rye in 2010.

In his write-up in January of the then-newly-filed lawsuit, The Hollywood Reporter’s Eriq Gardner quoted court papers reading, “Remarkably, he [Colting] also has the temerity to claim on the KinderGuide Website that an upcoming title is none other than Catcher in the Rye.”

Three public domain titles in the KinderGuides series. Frekrik Colting and Melissa Medina are listed as authors on all three. The illustrators whose work you see here are, from left, Lett Yice, Yeji Yun, and Madalina Andronic.

The plaintiffs in this year’s case against Moppet Books say, in their prepared statement, “Penguin Random House, Simon & Schuster and the estates of the authors whose books were involved are pleased by the court’s ruling in favor of their joint motion for summary judgment. The ruling recognizes the clearly infringing nature of the KinderGuides books and unambiguously supports copyright holders’ ability to exercise control over the publication of their works.”

Andrew Albanese, in his article at Publishers Weekly, points out that we’re so far without a memorandum from Judge Rakoff on the decision. The judge has said the rationale will be forthcoming, and, as Albanese also points out, hasn’t issued an order for relief.

You can hear Albanese parse the situation in the latest Publishers Weekly-sponsored Beyond the Book podcast with Copyright Clearance Center‘s Christopher Kenneally.

While the Canadian case we examined earlier this week has the benefit of some very fine, extensive writing by justice Michael L. Phelan–instructive in how he has determined his decision in favor of Canada’s publishers–what’s missing so far in the Moppet Books KinderGuides case is just that sort of explanation.

“You know what would really be awesome here,” Albanese says to Kenneally with obvious frustration we all can share, “is a legal opinion!”

Assuming the judge does indeed render that opinion, it will be well worth study by many in the industry who are today watching carefully as copyright is tested in many parts of the world.

In comments to Gardner for The Hollywood Reporter in January, Colting said, “We strongly believe that we are doing nothing different than what the many other educational publishers providing study guides have been doing for many years…It is hard, especially as a small publisher, not to feel as if we are being bullied by these big publishers for something that is meant to provide a better environment for literature in the future.

“Study guides play an important part in understanding our culture and we will fight for our right to be able to continue to publish KinderGuides.”

What remains hard to understand, however, is why—when so many great works in the public domain can be given the KinderGuides treatment for kids without any concern for legality—Colting seems intent on reaching for copyrighted works that, as Alter has said so well, don’t even seem logical for introduction to young children.

She notes in her December article that the KinderGuides edition of Breakfast at Tiffany’s “skipped over the awkward question of whether Holly Golightly is a prostitute.”