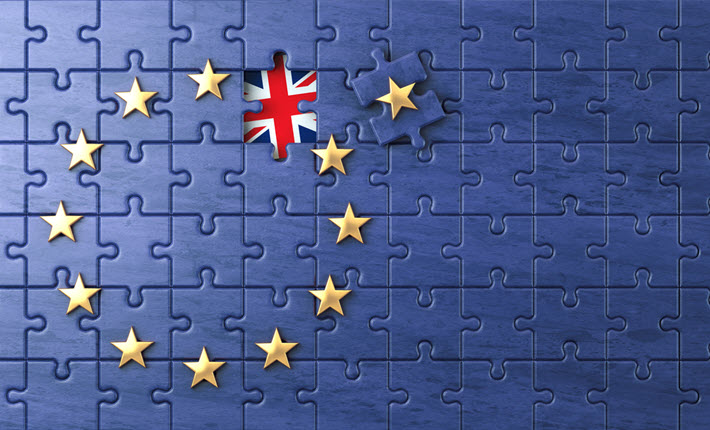 ‘With those working in the UK’s cultural and creative sectors voting overwhelmingly to remain’ in the union,  can the EU’s cultural grants program continue to serve the UK? 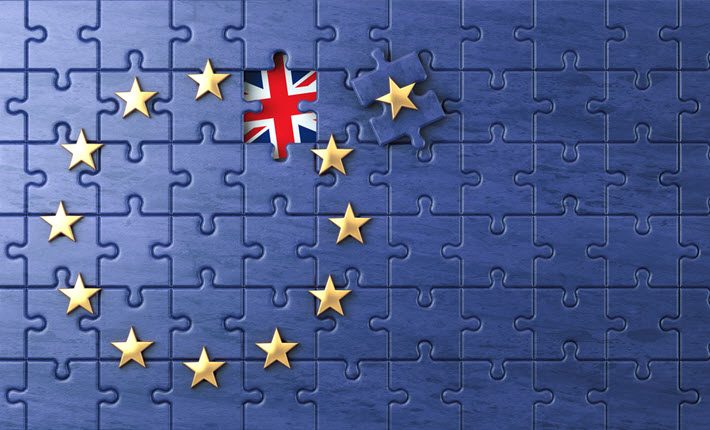 In June 2016, “the UK voted to leave the EU, but this decision has not changed the UK’s current participation” in Creative Europe, the European Union’s program for cultural funding.

What’s adding poignance ro the report released on Thursday (July 12) is the looming prospect of Brexit. In fact, the report was launched on the same day that the UK government published its first draft legislation, “marking the first step in what looks set to be a bitterly fought domestic battle at the same time Britain negotiates its departure with Brussels,” as the Wall Street Journal’s Jason Douglas wrote.

The tone coming from the Creative Europe program is more optimistic. “The UK is expected to continue to be involved in Creative Europe at least until the UK leaves the EU,” according to the program’s director, Agnieszka Moody, and the head of culture for Desk UK at the British Council, Christoph Jankowski.

That commentary, however, is perhaps more wishful thinking than not. There’s good news: “Application rates have not been affected, with UK-led and -partnered projects increasing in 2016 from 62 to 88 in the culture sub-program, and from 194 to 208 in the media sub-program.”

And the report clearly outlines a hefty infusion of resources into elements of cultural life in the United Kingdom.

A Mix of Cultural Resources 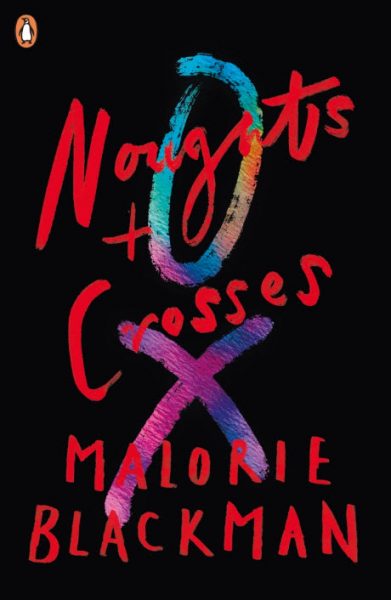 A great deal of the report has to do with UK film and television production, distribution, and visibility on the world stage. This falls under the media sub-program area and much of the publishing world’s place in that area may be a step removed, as a generator of content, with benefits from production rights for published content.

Still, of a total €57 million (US$65 million) in grants to 283 UK cultural organizations starting in 2014, some €2.8 million (US$3.1 million) have gone to UK programs in writing or publishing, according to Heloise Wood’s reporting at The Bookseller.

That part of the funding “went to 28 UK organizations including publishers and literary festival organizers,” Wood writes, ‘while grants totalling €11.7 million [US$13.3 million] were awarded to other media companies, including production firms adapting books for TV and film.”

And there are parts of the Creative Europe program that relate directly to publishing, most conspicuously the “Translating European Literature” section of the program, in which the report indicates that the UK stands as the second “most represented country.”

“Creative Europe’s Literary Translation funding opportunity,” the report reads, “supports publishers and publishing houses [in translating] literary works from one European language to another. Selected works are also supported in their production and promotion.”

The sturdily popular young readers’ author Malorie Blackman–from 2013 to 2015 the UK’s Children’s Laureate–is mentioned in the Creative Europe UK report: her Noughts & Crosses (Penguin, 2017), which focuses on themes of racism, is being translated into Albanian by Shtëpia Botuese DITURIA. 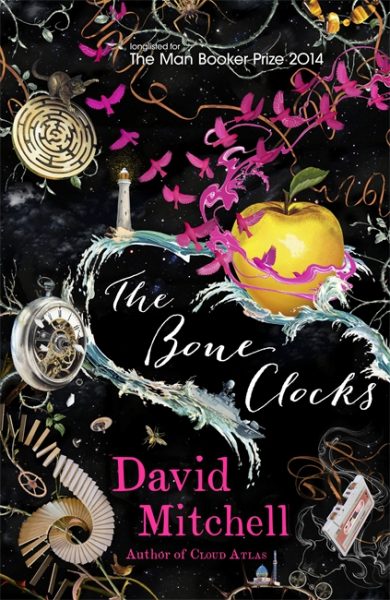 The Bone Clocks (Hodder & Stoughton/Sceptre, 2014) is being translated into Macedonian, as well, the report says, and Virginia Woolf’s Jacob’s Room is getting a Bulgarian translation. (The report unfortunately does not name translators assigned to these projects.)

All told, Creative Europe translation grants are going to 25 books in 2016, the report tells us, and some of the publishers and imprints that have benefitted in the past are Peirene Press, Quercus Editions, Istros Books, and Harvill Secker.

Literature also benefits from Creative Europe initiatives in the European Prize for Literature, the 12 winners of which this year include Sunjeev Sahota’s The Year of the Runaways (Pan Macmillan/Picador, 2016)–the book was also shortlisted for the Man Booker in 2015. 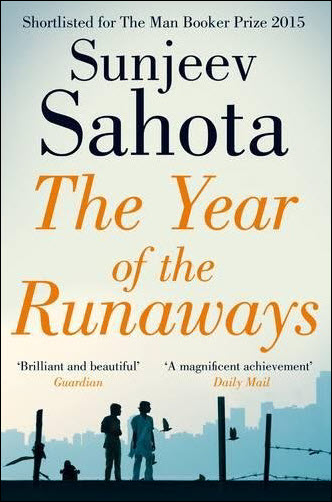 One of the most wrenching elements of Brexit enforcement–in whatever shape that’s negotiated–may be previewed here in the simple release this week of Creative Europe’s UK report.

“One of the main challenges of 2016,” the Desk UK team writes in an afterword, “was the outcome of the EU referendum in June. Following the referendum result, there are no immediate material changes to the UK’s participation in Creative Europe, and we have worked hard to offer continued messages of reassurance to potential applicants.”

The question, of course, is how viable such reassurance might be if the shape of the UK’s withdrawal from the European Union prevents the UK’s continued participation in Creative Europe.

“With those working in the UK’s cultural and creative sectors voting overwhelmingly to remain in the European Union,” the  Desk UK at Creative Europe writes, “we will work to endorse continued participation in the program.”

How receptive to such endorsement Brussels may be, however, is a massive question mark. A great many long inter-related programs and projects, both cultural and otherwise, are going to be questioned, reconfigured, and pushed apart. 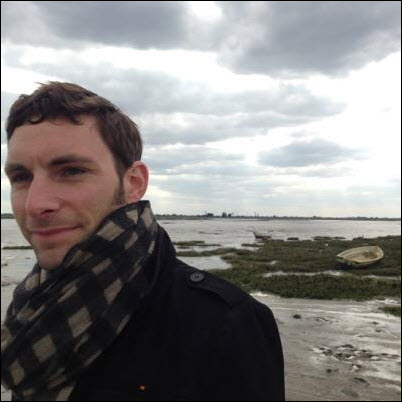 And it’s not likely that the majority of voters in one business field or another, such as the creative industries of the UK, will be allowed to carry the day over the national results of the referendum last summer.

In a year filled with regrettable political shifts, the now tentative stance of the future relationship of the UK’s creative workers and businesses and Creative Europe reflects the dubious state of this long moment.

What can be said, however, is that Creative Europe Desk UK, led by Jankowski, is taking an upbeat tack, closing the 76-page report with the line: “We look forward to working with many more of you in the years to come.” 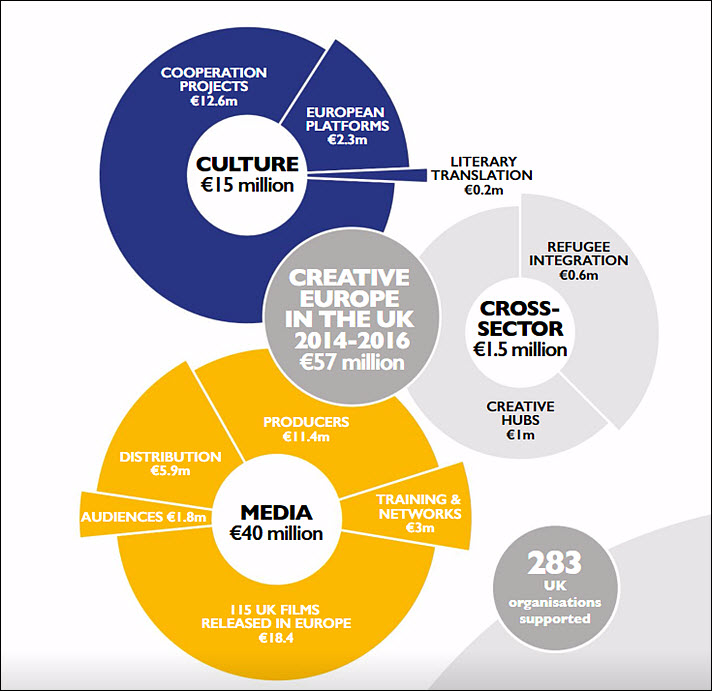 From the 2017 ‘Creative Europe’ in the UK report