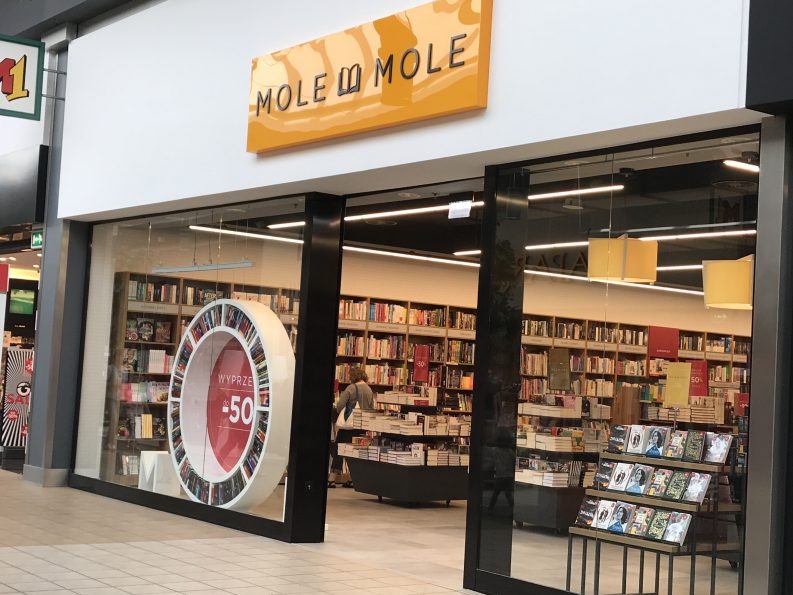 Calling the concept ‘small format bookstores,’ a major Polish retailer is betting on a bookish focus and proliferating locations to make a success of its new Mole Mole bookshops. 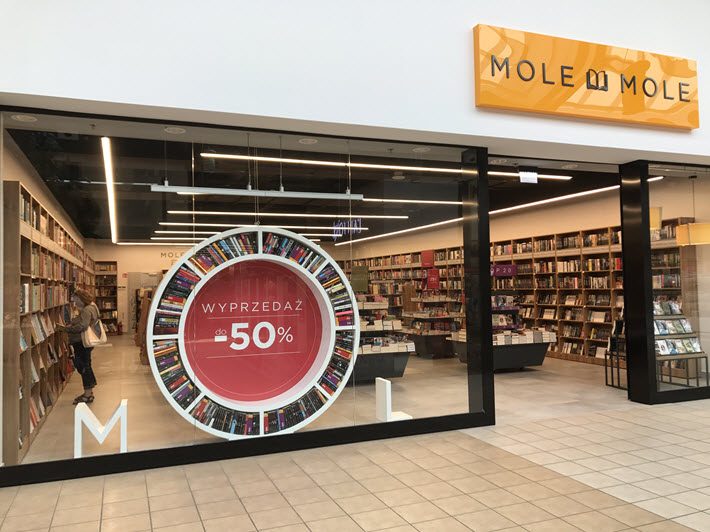 At one of Empik’s new Mole Mole bookstore locations in Marki, near Warsaw. Image: Jaroslaw Adamowski

Even as Matras, a formerly dominant Polish bookstore chain, weakens, another company is opening new outlets. They’re owned by Empik, a retailer of more than books. They’re small in size, tightly focused on bookselling–and rolling out fast. —Porter Anderson

Amid a declining number of independent bookstores, Poland’s newest bookselling chain Mole Mole recently opened seven outlets in as many cities, and has announced its intention to open another 15 more stores in large cities and smaller municipalities by the end of this year.

The chain is being developed by Polish retailer Empik, which dominates the country’s bookselling industry with a network of some 240 outlets across Poland. Empik’s interest is in a new retail format focused on books and taking advantage of the voids left by closures of small bookstores in many parts of the country. 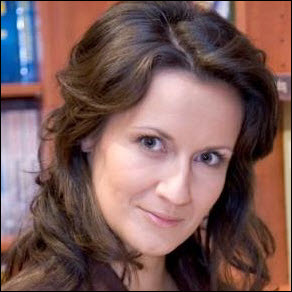 Empik’s Monika Marianowicz has told Jolanta Włodarczyk from the local publishing industry news site Wirtualnywydawca.pl that the retailer aims to develop what she describes as “a completely new concept within Empik group–small and mid-sized bookstores of between 70 and 200 square meters.

“They offer only books,” she says, and are different from traditional Empik stores, not only in their product range and small size, but also in their design and presentation.

She talks of the company’s distinction between the nature of standard Empic retail sites and Mole Mole stores, saying that the traditional Empik “format is a lifestyle brand that focuses and offers various forms and manifestations of creativity–culture and entertainment–while Mole Mole is a small-format bookstore, which will be developed independently.”

Of the first seven locations, two new outlets have opened in large cities, Krakow and Zabrze, while the remaining five Mole Mole bookstores launched in smaller municipalities with populations of fewer than 100,000 people, including Czeladź; Marki; Ostrów Świętokrzyski; Kołobrzeg; and Łomża. The chain is currently in the process of recruiting new employees for its stores.

In addition to the 15 outlets scheduled to be opened in the second half of this year, Empik is also considering licensing franchises, according to company representatives.

Between 1999 and 2012, the number of bookstores in Poland reportedly dropped from 2,900 to 2,200. This has forced local booksellers to lay off as much as 25 percent of their workers, according to the publishing market research firm Biblioteka Analiz. 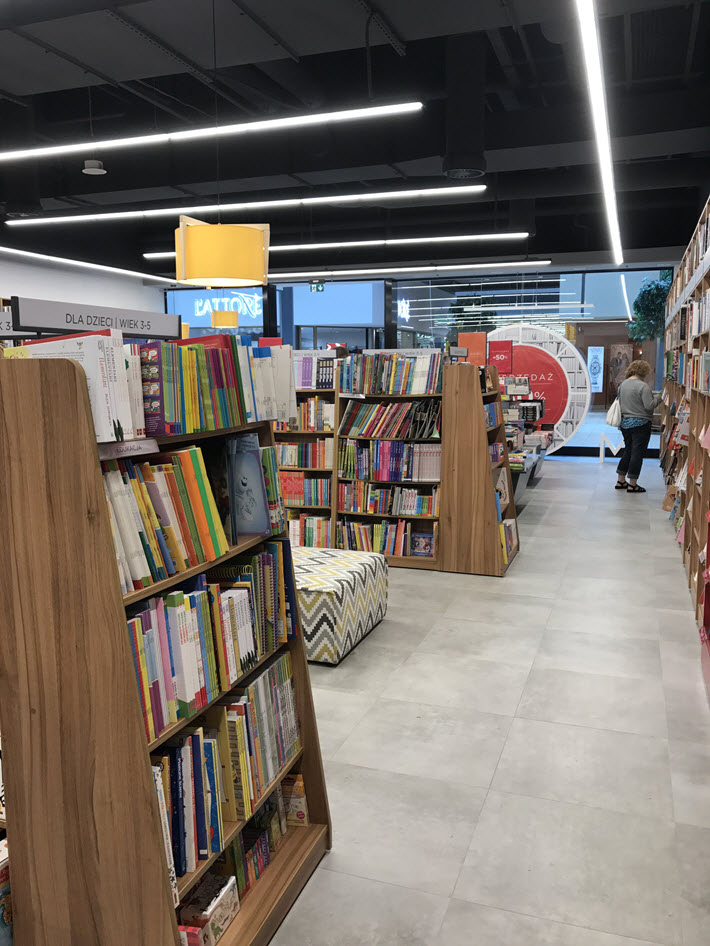 Empik’s business model has shifted in recent years from selling books, newspapers, and magazines to more diverse inventories including music, films, and video games. So the new bookstore brand represents an opportunity to focus and maintain its tight grip  on Poland’s bookselling industry while not giving up on other product categories in larger stores.

Between 1999 and 2012, the number of bookstores in Poland reportedly dropped from 2,900 to 2,200. This has forced local booksellers to lay off as much as 25 percent of their workers.

To date, no chain has managed to successfully challenge Empik’s prominance in the Polish market. The most promising attempt was launched by Poland’s second-largest bookstore chain Matras which, at the time of its takeover by businessman Jerzy Kowalewski in 2014, operated some 174 stores.

Following Matras’ acquisition by Kowalewski, company representatives said that management was determined to return to opening stores at the rate of 20 to 30 per year. Like Empik, Matras’ plans also included talk of a franchise network.

But Matras has struggled to stay in the black as a reported 17 Polish publishers filed for alleged unpaid invoices. Matras’ financial woes have forced it to shut down a number of outlets. Currently, the chain has some 115 bookstores in two formats, Matras and Matras Caffe, according to data from the company’s site.

Another bid to break Empik’s dominance in Poland’s bookselling retail was made by BookBook, a bookstore chain created by six Polish publishers and a book distribution company last year, as reported by Publishing Perspectives. The joint venture currently operates some 81 bookstores in Poland, according to figures from its site. BookBook’s outlets are concentrated in the country’s east, with a significant number of bookstores in the northern and southern areas. But BookBook remains a weak presence in western Poland, the most populous region.

In the interest of widening its footprint, BookBook has researched taking over Matras’ bookstores, as reported by Dawid Tokarz in the business daily Puls Biznesu.

Other potential bidders include Empik and the publisher FK Olesiejuk, but, given that Matras has a strong presence in Poland’s western and central areas, its potential takeover might best benefit BookBook–allowing the chain to compete against Empik in these regions.

And launches of the small Mole Mole bookstores could indicate that Poland’s dominant player is gearing up for a potential standoff.