‘A constant indefensible attack on freedom and rights of citizens in Turkey,’ writes agent Nermin Mollaoğlu, strikes close to home with the detention of Princeton University Press author Koray Çalışkan.

‘The Republic of Fear’

In her newsletter from Istanbul this week, Kalem Agency founder Nermin Mollaoğlu writes that one of the authors she represents, Koray Çalışkan, is being held under house arrest.

“Some of you met him during our [10th anniversary] Red Party at Frankfurt Book Fair” last year. “I am sure that you’ll remember him with his wit and humor.”

Kristenn Einarsson, chair of the International Publishers Association’s Freedom to Publish Committee, has issued this statement in response to Publishing Perspectives‘ inquiry:

“We are deeply worried about the situation for our colleagues in Turkey, and the Kalem Agency case shows that the harassment continues. We are equally impressed by how the Turkish Publishers Association stands up for the right to publish, as shown in their latest report on Freedom to Publish in Turkey 2016 and 2017.” (More follows in this article on that report.)

The situation to which Mollaoğlu is alluding began on July 10 when, as Daren Butler and Ece Toksabay wrote for Reuters, “Turkey issued arrest warrants for 72 university staff…Police have so far detained 42 of the staff from Istanbul’s prestigious Bogazici University and Medeniyet University…Eight of the 72 were from Bogazici, including well-known academic Koray Çalışkan, who worked in the past as a voluntary adviser to Kilicdaroglu, according to a CHP official.”

That reference is to Kemal Kilicdaroglu, who leads the secularist CHP. According to Reuters, Kilicdaroglu had finished a 25-day march from Ankara to Istanbul, protesting the Erdoğan regime’s repressive policies, and he led a rally on Sunday, July 9. The next day, Çalışkan was taken, as part of the initial university detentions. The Washington Post carried the Associated Press report, which quoted the Anadolu news service, saying, “Prominent Bogazici academic and government critic, Koray Çalışkan, and 19 professors from Medeniyet’s medical school are among the detained.”

On July 14, Çalışkan was moved to house arrest, according to a report from BBC Turkey and to Mollaoğlu’s account in her newsletter. 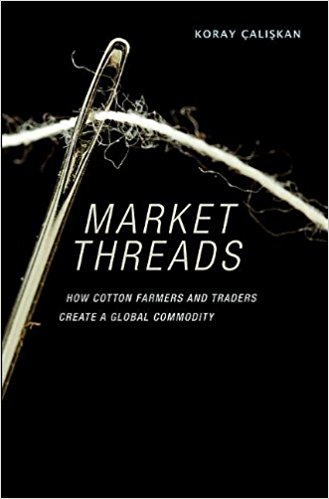 Çalışkan is an associate professor at Bogazici in political science and international relations. He’s the author of Market Threads: How Cotton Farmers and Traders Create a Global Commodity (Princeton University Press, 2010), a warmly welcomed examination of global markets and how they work. In a blurb for the book, the University of Edinburgh’s Donald MacKenzie writes that Çalışkan “combines state-of-the-art theoretical sophistication with a remarkable multi-site global ethnography. It is a must-read for anyone interested in the complex processes by which markets are put together.”

Çalışkan’s work covers many media. He’s a screenwriter in both film and television and has produced many analytical and critical pieces for newspapers, as well.

In her newsletter, Mollaoğlu writes that Çalışkan is working on “a literary nonfiction book about Turkey, which will be an enlightening text for foreigners who only follow the dark news of the mainstream media.

“Before his detention,” she writes, “he posted a photo from the final rally of the ‘Justice March’ on July 9, which two million people attended in support of  peace, freedom, and democracy in Turkey, and he wrote ‘When you stand together you become full of hope, my beautiful country.’

‘Standing Together With Our Friends’

Mollaoğlu has been named this year’s Best International Literary Agent at London Book Fair’s International Excellence Awards, and is one of the world publishing community’s favorite personalities. Vivacious and outgoing, Mollaoğlu nevertheless has been carefully articulating the deterioration of freedoms in Turkey since the failed coup of a year ago.

In a thoughtful interview with Roger Tagholm for Publishing Perspectives in September, she said, “As you know, our beautiful, wonderful country is called the Republic of Turkey. I feel–and I am sure most of the population feels this too—that it’s now the “republic of fear”: fear of recession, fear of the future, fear of life. That’s the shortest summary.

“I really believe that the future is quite bright—we just need to keep working hard and believe in the power of literature.”

Mollaoğlu will be part of a five-person team from the Kalem Agency at Frankfurt Book Fair (October 11-15), and will be at table 38K in the Literary Agents & Scouts Center. The agency is known for its strong presence in the international rights transaction arena. In her newsletter, she writes about the collegial value of the world publishing industry’s community: “There is a constant indefensible attack on freedom and rights of citizens in Turkey,” she writes.

“Standing together with our friends from all around the world is what we need and we hope to see you soon in Frankfurt Book Fair.”

A Year After the Coup Attempt 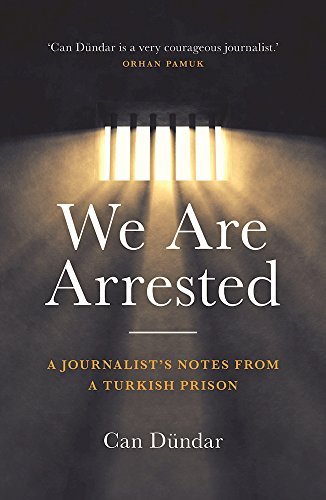 While in contact with us relative to the Çalışkan situation, the International Publisher’s Association’s Kristenn Einarsson tells Publishing Perspectives that he’s traveling to Turkey for Monday’s (July 24) start of litigation in the Cumhuriyet case. That’s the newspaper the journalists of which have been imprisoned and indicted as “sympathetic to the PKKKCK and the FETÖ/PDY terrorist organizations.”

Can Dündar, former editor-in-chief of Cumhuriyet, spoke to journalists in October at Frankfurt in a news conference. He’s living in Germany after being held in solitary confinement by the Turkish regime. His book, We Are Arrested: A Journalist’s Notes From a Turkish Prison, has been released by Biteback Publishing.

The Turkish Publishers Association has issued an update from Istanbul, Report on Freedom to Publish in Turkey: June 2016 to June 2017. The first line perfectly captures the dire focus that the events of July 2016 have created in the country: “The main event that marked the publishing activities as much as the history of Turkey last year was undoubtedly the attempted coup on 15 July 2016.”

Leaving 246 people dead, the coup attempt was followed by the institution of a “state of emergency.” As Reuters reports, “the government says the crackdown and constitutional changes are necessary to address security threats.” And in the service of that proposition, some 50,000 people have been arrested, according to Reuters’ figures, and 150,000 state workers “including teachers, judges, and soldiers,” have had their work suspended under emergency rule.

The publishers association describes a woeful situation, parts of which have been reported on by Publishing Perspectives and other media:

“After the state of emergency,” the association report reads, “30 publishing houses were closed with statutory decrees leaving thousands of publishing professionals unemployed, the seized institutions’ debts were not taken over, and no compensation for labor was received.

“There were attacks against publishing houses and bookstores that became targets or were shut down.

“Our member Turhan Günay, a literary laborer, and representative for Cumhuriyet Books and Gökçe Fırat Çulhaoğlu, editor-in-chief of İleri Publishing have been in jail for months on account of their work. Representatives of TPA member publishing houses Ahmet Nesin, owner of Düşün Publishing and Ragıp Zarakolu owner of Belge Publishing are both charged with terrorism for their civic actions and expressing their opinions.”

Writers and publishing houses have faced lawsuits–for “their unpublished publications,” the association points out–and several authors have been imprisoned.

While the closures of some 30 publishing houses have been reported fairly widely, the association’s account goes on to point out that book bannings are part of the “state of emergency” measures undertaken by Ankara, as well. 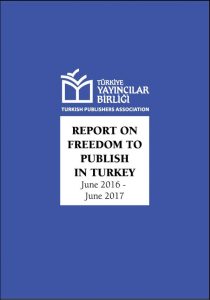 “Court decisions to seize books have gained momentum,” the report reads, “and not serving the decisions to the publishing houses became standard practice. Instead, publishers received information about seizures informally through bookshops or distributors. The publishers have no way to initiate legal processes about issues they are not officially informed of and cannot challenge the decision nor can they receive their books back.”

In instance after instance, the association reports on seizures, bannings, and a kind of weaponization of books–detentions of the owners of certain books have not been uncommon, as the government alleged that discovery of a given book was evidence of subversion. At times, this has reached laughable proportions, as when the association reports that in one case a defendant had jotted down the names Albert Camus and Baruch Spinoza, only to find in the indictment of a leader of the now-shut-down Association of Free Journalists referring to “books by the organization members Spinoza and Albert Camus.”

Here is a list of writers and publishers the Turkish Publishers Association says were in prison as of April:

Even sharing on social media, the association reports, has led to the arrests of 1,656 people. “The term ‘social media terrorists’ is derived against those who use their
freedom of expression,” the report reads.

“According to the ministry of interior, legal action was taken against 3,710 people in the second half of 2016; all within the scope of “the fight against terrorism” and 1,656 were arrests. Social media related detentions and arrests continued in the first half of 2017. Two striking examples are singer Atilla Taş and fashion designer Barbaros Şansal. Both remain in prison for months for critical tweets.”

The report is a helpful compilation of deprivations, impositions, and compromises of the freedoms of expression and publishing, and provides a useful background to the news that Nermin Mollaoğlu is conveying about the author Koray Çalışkan.