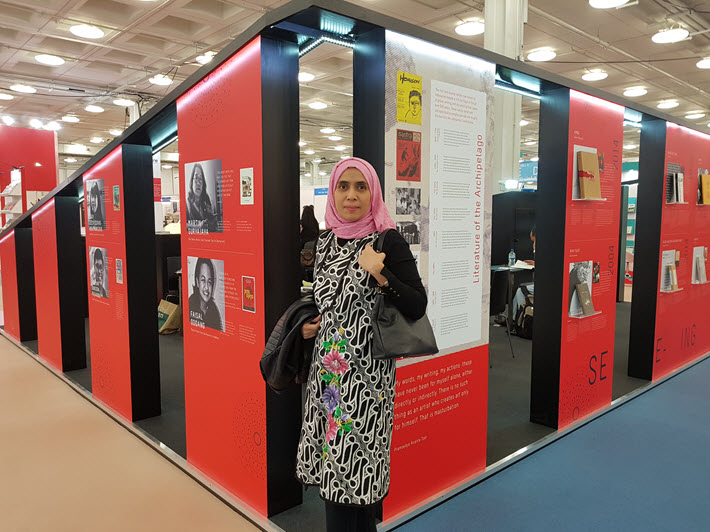 Among institutions working in Jakarta to cultivate a growing interest in foreign rights sales: the Lontar Foundation, the National Book Committee, and the Indonesia Rights Fair. 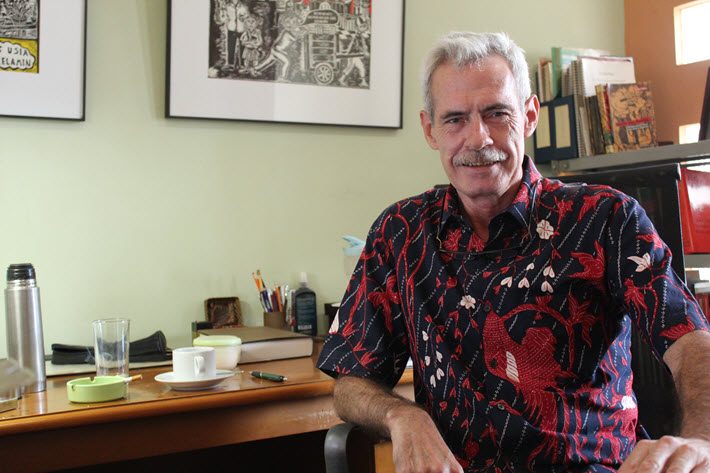 One of the most sustained efforts on the international scene in publishing today is that of the Indonesian market.

In early September, the Indonesian International Book Fair in Jakarta will again feature a special Indonesia Rights Fair at which publishers, literary agents, and rights holders can meet and make rights transactions. In 2016, a group of some 25 publishers participated in the rights program.

And Publishing Perspectives has had the input of several engaged players on the ground there in our effort to understand the market and its rights-trading status today.

“More foreign publishers—from the US, Great Britain, France, and Germany—are calling on Lontar in their search of Indonesian titles.”John McGlynn

“Having worked as a translator for 40 years and a publisher of Indonesian literature in translation for 30 years,” says John McGlynn, “I’ve seen a slow but steady rise in foreign rights interest in Indonesian literature, especially since 2013 when it was announced that Indonesia would be Guest of Honor at Frankfurt in 2015.”

McGlynn is one of the founders of the Lontar Foundation, an independent nonprofit established in 1987 to promote Indonesian literature and culture through the translation of Indonesian literary works.

“The Lontar Foundation, through which I’ve published more than 200 translated titles,” McGlynn says, “has long served as a resource of information for publishers abroad. And now, more and more foreign publishers—especially from the US, Great Britain, France, and Germany—are calling on Lontar for assistance in their search of Indonesian titles.” 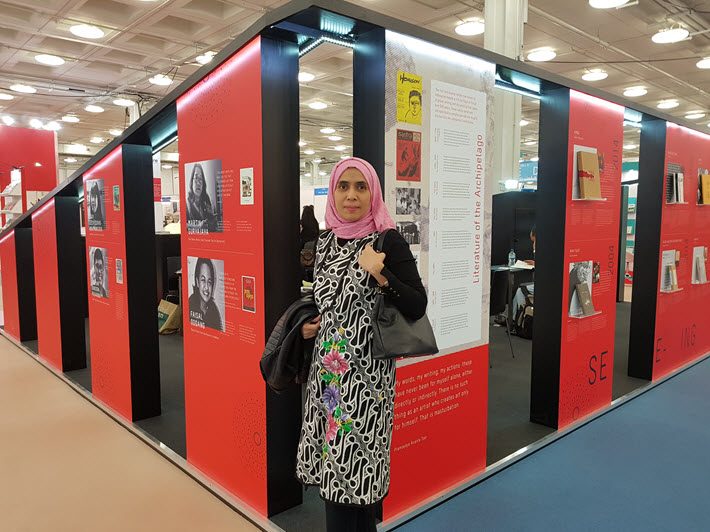 is CEO of Mizan Pustaka (mizan means balanced), one of Indonesia’s largest publishing houses, and of Pelangi Mizan—part of the Mizan Group. She’s also a specialist in children’s books and a member of the Indonesian National Book Committee—which is themed “17,000 Islands of Imagination”—and her company’s translations into Indonesian comprise the work of some of the best-known authors in the world, including Alice Munro, Dan Brown, Gabriel Garcia Marquez, Haruki Murakami, Paula Hawkins, Umberto Eco, and others.

From her vantage point at Mizan, Meutia says, “Annual sales of foreign rights at our house are less than US$10,000. But, of course, the titles we sell are mainly children’s and religious books, rather than fiction titles.”

And in terms of what data is available, we’re assisted by Laura Prinsloo, managing director of the publisher Kesaint Blanc and, with Meutia, a member of the National Book Committee. 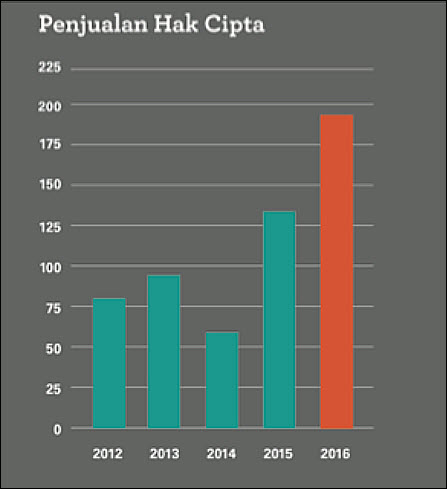 Prinsloo shares this chart with us, describing Indonesian rights sales between 2012 and 2016. “The data is not complete,” however, Prinsloo cautions, “because this is based only on what the National Book Committee can collect, mostly from publishers who exhibit with our national stand at the book fairs we participate in—Bologna, London, Beijing, and Frankfurt.”

Prinsloo is managing director of Kesaint Blanc, which was founded in 1979 as a printing house and quickly expanded into publishing, in 1982. The company’s specialization is in foreign language instruction books and leads that sector in Indonesia’s publishing industry.

When asked about titles that have done well on the Indonesian market, McGlynn points out, “The number of Indonesian titles translated and published abroad continues to remain relatively low. Success stories are few.” 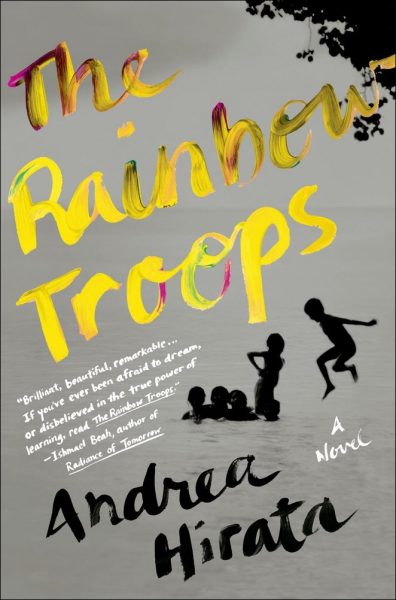 Prinsloo, like McGlynn, mentions Hirata, specifically her Rainbow Troops–likely, she says, the most translated Indonesian title to date.  Translated in its English edition from FSG/Sarah Crichton Books (2013) by Angie Kilbane, the book was published in Indonesia in 2005 and reportedly has sold more than 5 million copies, a book often compared to Khaled Hosseini’s The Kite Runner.

“Author Asma Nadia,” Prinsloo says, “has the most titles made into films. And Dian Pelangi’s hijab books I’ve heard sell well in Europe, especially in the UK.”

In terms of her own company’s output, Prinsloo says, “Our nonfiction language-learning materials have sold well in Asia. Last year alone, we sold seven titles into Malaysia and 13 into China. We also sold a number of children’s titles to China. It’s harder to sell children’s titles to European publishers,” she says, “because their standards are very high and they prefer hand-drawn” illustration. 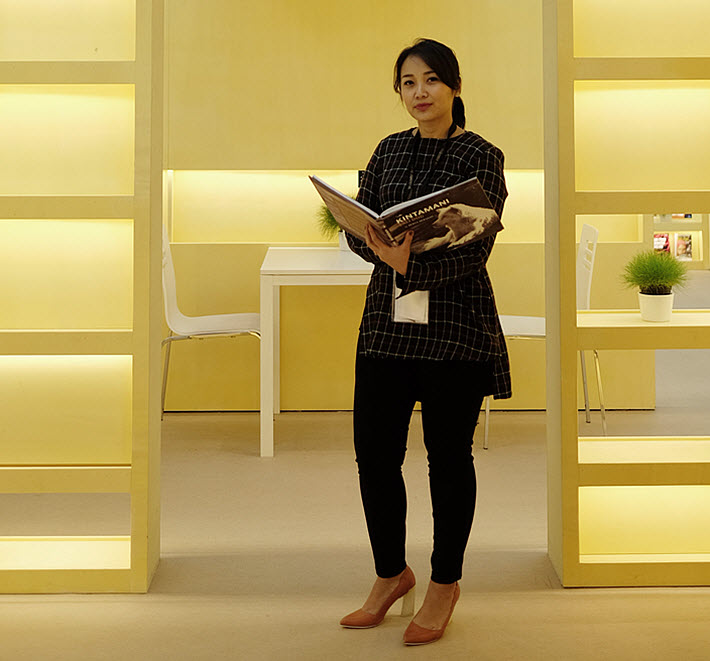 ‘Much More Work Needs To Be Done’

Of course, any publishing market’s success on the world stage depends not only on the interest of rights buyers but also of rights holders. We asked our three experts how much interest there is among Indonesian publishers in expanding their rights sales.

“There’s now much more interest on the part of Indonesian publishers in international rights sales,” McGlynn says. “Again, we can thank Indonesia’s position as Guest of Honor at Frankfurt Book Fair in 2015 for that. International rights sales have increased exponentially, but much more work needs to be done, especially in the preparation of sample translations of titles with global potential.”

Prinsloo says she’s cautiously optimistic. “Indonesia is still very new to rights selling.” Since the Frankfurt Guest of Honor stint, “I think that interest is still there,” she says,” but it’s not the main focus because the revenue is still very small compared to the investment. I think that if the government stopped its support” in terms of international promotion, “that interest would soon fade away.”

While many Indonesian publishers work with the Borobudur Agency, “top Indonesian authors usually handle rights by selling their own.”Sari Meutia

Staffing, Meutia says, plays a role in how Indonesia’s publishers evaluate rights trading. “Not many publishers have a dedicated person to handle that,” she says. “And there’s only one literary agency that actively promotes Indonesian book rights, the Borobudur Agency. So many publishers work with Borobudur to represent them in selling rights.”

Both Meutia and Prinsloo say Malaysia is the first rights trading market for Indonesian work. Prinsloo mentions China next, noting that the main interest there is in children’s and nonfiction titles from Southeast Asian markets.

Speaking for his foundation’s perspective, McGlynn says, “Lontar receives queries from all over the world, but most come from non-English-language publishers who use Lontar titles to judge possible interest in their territories.

“Traditionally, most queries have come from European publishers,” he says, “but of late, we’ve seen more interest on the part of Arabic and Korean publishers.”

Something that might surprise writers in the West: While many publishers work with the Borobudur Agency for sales, Meutia says, “top Indonesian authors usually handle rights by selling their own.” Dee Lestari is one such author, she says, while Eka Kurniawan works with the Barcelona-based Pontas Agency and Hirata works with Anderson Literary Management.

Kesaint Blanc’s Prinsloo says that the Indonesian International Book Fair gained its international status in 2015 and “is pushing toward promoting rights trade to local publishers” through its International Rights Fair.

The rights program is active during the first three days of the wider fair.

In 2016, Prinsloo says, “the interest was very good, with 21 rights transactions” being executed during the inaugural run of the rights center. “And local publishers,” she says, are finding it more and more advantageous to assign a rights director to the task of handling their foreign rights, although in some cases that staffer will have other duties as well.

“For the kind of sales opportunities that come from international book fairs, publishers here generally use rights agents such as the Borobudur Agency to help sell their titles. The National Book Committee also helps sells titles that are in our catalog,” and the committee will also direct leads to specific publishers.

“The committee publishes catalogs for all genres, curated lists from Indonesian publishers of all sizes in Indonesia.”

More on the Indonesian International Book Fair and its Rights Fair is here.