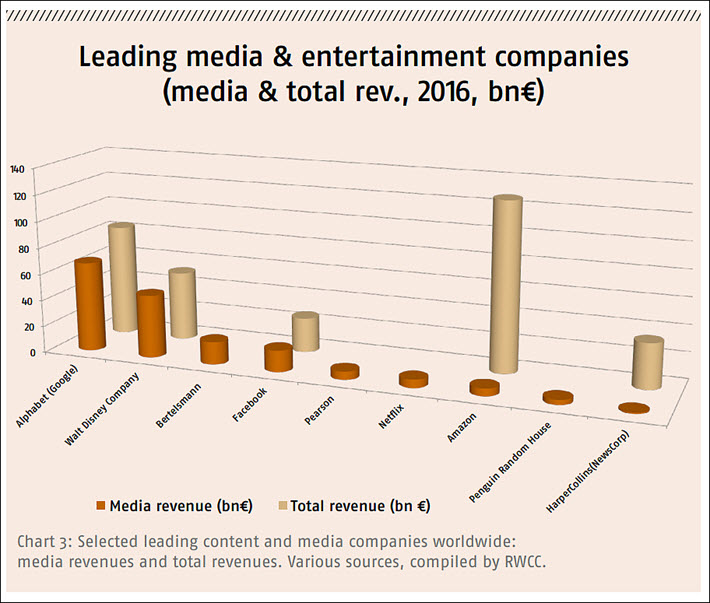 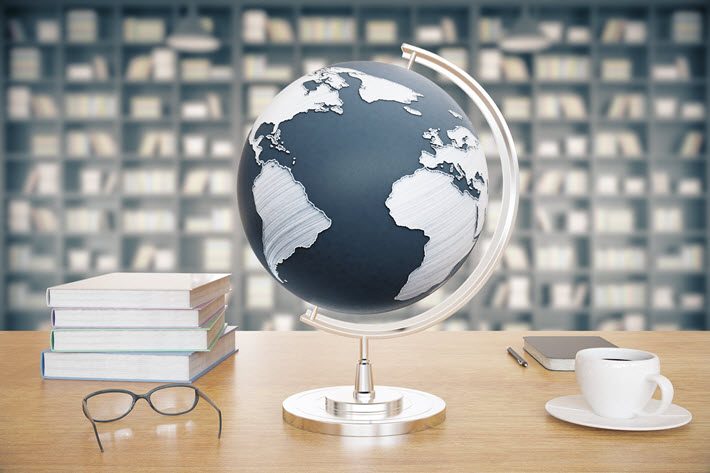 In the white paper The Business of Books 2017—a publication released for the interests of Business Club members at Frankfurt Book Fair (October 11-15)—consultant Rüdiger Wischenbart brings together several international parameters for this year’s discussions in Frankfurt this year.

Building on some of the information he pulled together for his annual Global Ebook Report, covered here by Publishing Perspectives, Wischenbart in his new white paper broadens the angle of his observations. In doing so, he echoes certain politicians—”Nobody knew health care could be so complicated”—by conceding that in the world of book publishing, “globalization has become an altogether more complicated concept.”

In this article, we won’t attempt to cover all key points of the 15-page report. There are sections, for example, on comparative market size in world publishing and on trade and educational publishing’s relative points of difference and alignment.

We’ll take a look at the white paper’s commentary on competition, blockbusters, and the digital-pricing axis.

Not surprisingly, he leads this commentary with a section, “The World of Books, Divided,” in which he starts with a keen perspective on the changing geographical framework of Amazon’s revenue. 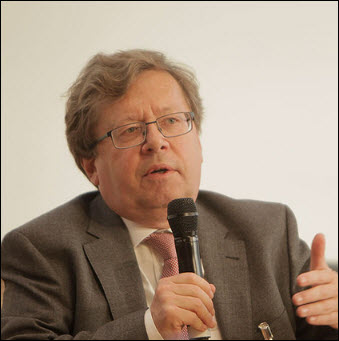 “In 2011, nine in ten dollars earned by Amazon internationally (in total, not only from books or media content) came from just three markets: Germany, the United Kingdom and Japan. Five years later, in 2016, the share of these top three international markets had dropped to 76 percent.

“Huge investments by Amazon, especially in India and China, have started to pay off. By 2016, revenue from “all other markets” had overtaken the respective incomes from Japan and the UK.

“Only in Germany did the aggressive growth curve in Amazon’s sales almost match the overall global expansion of the world’s largest online retailer.”

An interesting chart plots this adjusting set of curves, charting the angles of ascent in the overall international (non-American) revenue picture for Amazon from mid-2010 to 2016. 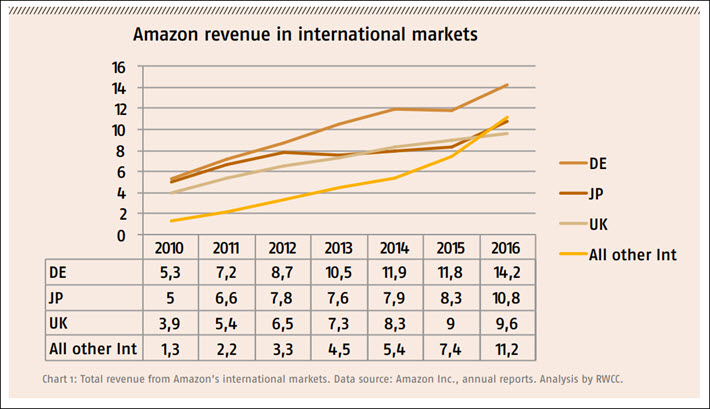 Needless to say, the vexing fact that Amazon isn’t “just a books company”–which might make the retailer’s long shadow more coherent and manageable for many in publishing–is exacerbated by the fact that it’s increasingly flanked by a squadron of tech-driven media and entertainment giants.

A ‘New Style of Digital Ecosystems’

While it’s nothing new to debate the multiplying electronic entertainment media vying with books for consumers’ time and interest, Wischenbart takes this a step farther, pointing out that, “For a long time, the global publishing industry outdid many other content industries in terms of their global turnover, including music, games and even movies (revenue from box-office sales).

“In this drastically more competitive environment, slow-moving content like consumer books risk being squeezed and marginalized.”'The Business of Books 2017'

“Today, however, scale is defined differently. Led by Google, Amazon, Facebook, Apple, and similar ventures, the predominant new style of digital ecosystems control both the access to content and the social interactions between users. “In this drastically more competitive environment, slow-moving content like consumer books risk being squeezed and marginalized.”

Indeed, at many points in publishing today, you can hear a mounting dissatisfaction with the speed to market in traditional settings.

Malcolm Gladwell, New Yorker columnist and author, in talking to Daniel Funke for the Poynter Institute, talks about his podcast series Revisionist History  (Panoply Media) talks of how refreshing he finds the audio medium’s speed-to-market. “I love how straightforward it is to reach your audience.

“They sign up, you stick it on iTunes and boom—you reach them. There’s no middle person, there’s no distribution. It just seems incredibly simple and clean, and that’s very appealing to me. I’m used to writing books where months pass between when you hand something in, or years can pass when it actually appears. And this just seems so elegant and simple by comparison.”

Another section of the report that might have particular interest to Publishing Perspectives‘ many rights-involved readers is about the role of blockbuster bestsellers in many of the world’s markets today.

“The ebook market segment is not singular in nature, but consists of at least two separate segments, separated by the average retail price.”'The Business of Books 2017'

Certainly authors and their agents have long expressed deep concern about the overhang of blockbusters in many markets, books that command so much readership that they can suck the air of marketing resources and publicity efforts right out of a sales meeting.

And the timing here is interesting, too. Frankfurt has just announced that Dan Brown will make his only appearance in Germany in support of his new Origin at Buchmesse on October 14. That’s a book that’s to be released in some 50 languages simultaneously, with the United States alone seeing a 2.5-million-copy laydown on October 3.

“While it is difficult to measure the extent to which the combined market share of blockbusters has increased over the past decade,” Wischenbart writes…”the publishing industry overall has seen a brutal pattern become firmly established: year after year a very small number of titles and authors enthrall a huge share of the global readership, monopolizing their attention and spending.

“As a consequence, these blockbusters are coming more and more regularly to define the balance sheets of even the largest, globally active publishing groups.”

Of course, it’s such titles that power much of the industry’s activity, but midlisters aren’t mollified by such industry conditions.

In the chart below, you see the titles from traditional publishers that have appeared in the Top-10 lists of eight markets: The US, the UK, Germany, France, Spain, Italy, the Netherlands, and Sweden between 2006 and 2016. “Of the top 100 titles in the survey,” Wischenbart writes, “each year’s Top Five accounted, on average, for one-fifth of the respective annual points total.”

In other words, look at the left side of the chart. That’s the Top Five towering over the others. 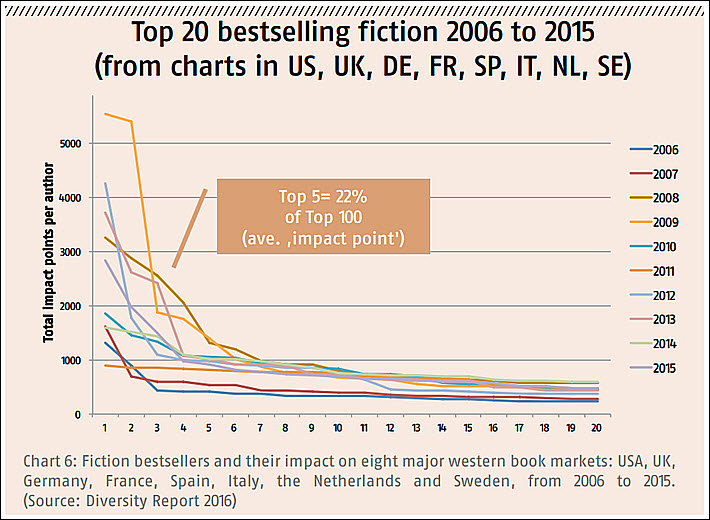 Pricing on the Slippery Slope

In other parts of the report, Wischenbart reviews his observations on ebooks in the world market and on trade and educational publishing comparisons.

“The higher price segment, which many traditional publishers prefer to sustain, risks appearing as an exclusive exception that caters to a small niche.”'The Business of Books 2017'

Of particular clarity is his point about the digital market as represented by ebooks: “The ebook market segment,” he writes, “is not singular in nature, but consists
of at least two separate segments, separated by the average retail price.

“One is defined by low prices of under five euros, the other thrives on charging between 10 and 13 euros for a digitally downloaded read.”

This, of course, helps contextualize the rise of self-publishing, a sector that’s usually hailed for lowering the barriers to publication for so many authors, but which also can be understood to be a pervasive force in downward pressures on book pricing overall.

“In all the markets, the low price segment is largely filled by self-published products,” writes Wischenbart, “as well as ebooks used by publishers for special promotional campaigns. Often, an earlier volume in a serialized work is offered at a heavy discount [or free of charge] to draw attention to the latest book being sold at a higher price.”

And again, Wischenbart discerns the dynamics of major online retailing in the mix: “Despite fixed book prices in many markets of continental Europe, there is a growing sensitivity to price and an emerging willingness to find legal ways to exempt ebooks from the higher pricing requirements. These new practices have often been spearheaded by Amazon, as it introduces special ‘deals’ of the week or month, in ways that are compliant with regulations under restricted conditions in a market.”

From the consumer’s viewpoint, the report reminds us, an ebook “is largely consistent with other digital content formats, such as music or TV series, which are also offered sat either a comparatively low price or through subscription.”

And publishers this season are regarding their own preferences carefully in this scenario, as many conversations in Frankfurt will reflect. “The higher price segment [of books], which many traditional publishers prefer to sustain,” Wischenbart writes, “risks appearing as an exclusive exception that caters to a small niche of particularly literary readers of a certain age, educational background and cultural vocation.”