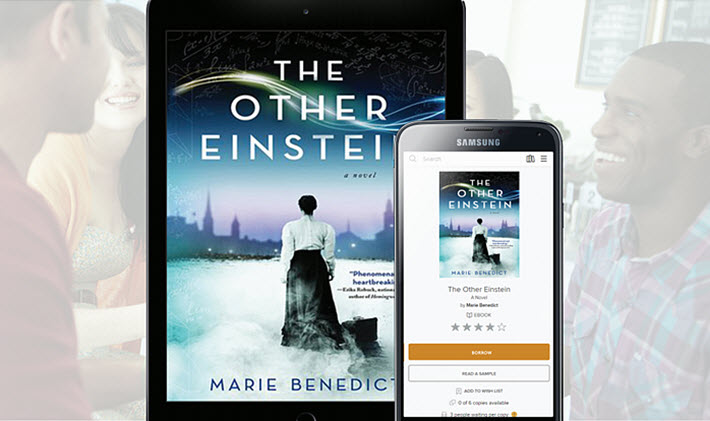 A two-week international reading-and-discussion exercise, the Big Library Read, is underway with more than 20,000 libraries in various parts of the world. 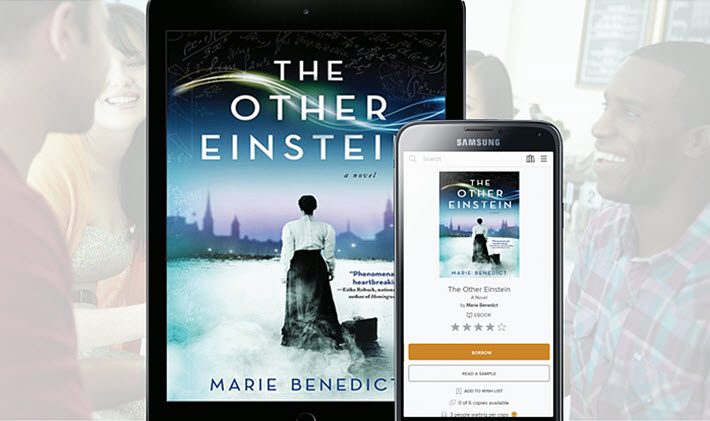 From poster artwork for the Big Library Read

‘The Role of Women’ in Our History

Referred to in press materials as “the world’s largest global ebook club,” Big Library Read is not unlike the US National Endowment for the Arts’ Big Read program, but set in the library world and on an international scale.

In this year’s iteration, participants have two weeks—today, June 12 through June 26—to read Marie Benedict’s novel The Other Einstein (Sourcebooks Landmark, October) as a free ebook checkout from their library. During the period of the Big Library Read, there are no restrictions placed on how many checkouts can be made. For readers, there are no waiting lists, no holds, and no late fees: the ebook automatically expires at the end of the two-week period. 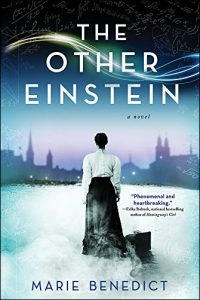 The Other Einstein is made available in formats for use on “all major computers and devices,” per press information, including iOS and Android devices. In the United States, Amazon Kindle .mobi files are available.

Begun in 2013, the Big Library Read program’s chosen titles are selected by reader vote and by librarians. OverDrive’s information shows that in the last selection, Julie McElwain’s A Murder in Time (Pegasus Books, 2016), sales for the book great “by nearly 800 percent in 2016,” making the title one of the bestselling last year for Pegasus. The Benedict book is the 13th title in the Big Library Read series.

There’s good timing, of course, in the choice of Benedict’s The Other Einstein, which is about the Serbian Mileva “Mitza” Marić, the first wife of Albert Einstein. National Geographic’s Genius–Ron Howard’s series on Einstein, the first scripted production for National Geographic. It began its airings on April 23 with Johnny Flynn and Geoffrey Rush as the younger and older Einstein, respectively.

Marić is said to have been a formidable student in physics in her own right and met Einstein at Zurich Polytechnic, hardly an easy place to gain a seat as a woman in the 1890s. At one point, her physics grade is said to have equalled Einstein’s, and there’s been some debate, historically, as to whether she contributed to the Theory of Relativity.

In a letter to Big Library Read participants, Benedict writes: 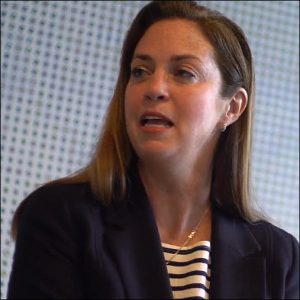 “While reading a children’s biography about Albert Einstein with one of my sons, I discovered that the great scientist’s first wife had been a physics student alongside him at university.”Who was this relatively unknown woman, I wondered, a physicist at a time when it was illegal for girls to even attend high school in many European countries? And then, of course, I became curious about the role she might have played in his “miracle year” of 1905 when he published his most important theories.

“The more I researched Mileva and came to know her through her letters, I realized that her story was powerful and important in itself, and instrumental in understanding our own history and the role of women in it.”

At press time, the program says that more than 20,000 libraries have opted into the effort.

At the Big Library Read site, you can see Marie Benedict interviewed about her book on video; look at previous selections for the program; learn more about The Other Einstein with a letter from the author and discussion guide; read a sample from the book; and join the discussion about it. Participation in the program is free of charge and available for card holders at participating libraries.