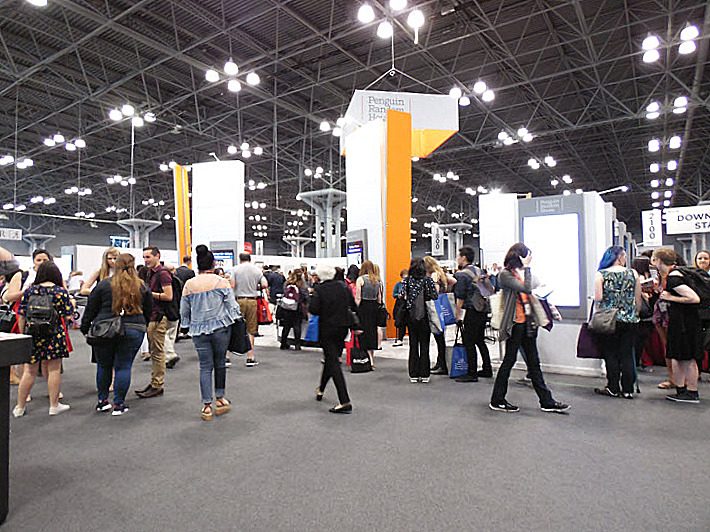 At the Penguin Random House stand at BookExpo 2017, a signing desk on each of its four corners. Image: Porter Anderson

For BookExpo, McDonald says the attendance was made up of “a solid group of 7,425 attendees” comprising “primarily booksellers, librarians, retailers, and media.”

McDonald does say that the desired categories of “booksellers, librarians, retailers, and media” were “up drastically from last year.” That, of course, seems to indicate that self-publishing authors, bloggers, consultants and digital service providers must have formed a substantial part of the attendance in previous years. And McDonald assures his readership that this year’s format “gave the right people the time and space for meaningful interactions on the show floor.”

The short form on this, of course, is that it was a smaller BookExpo this year, quite visibly so, as is evident in Hillel Italie’s writeup for the Associated Press (here carried by the Star Tribune), in which he writes:

“Square footage for the show has shrunk noticeably in recent years and the large gaps on the convention floor at times gave BookExpo the look of an idled factory. Publishers have wondered for years whether the convention was necessary in the Internet Age, when deals once negotiated at BookExpo are now accomplished online.

“‘BookExpo doesn’t need to be noisy, it needs to be focused,’ said BookExpo event director Brien McDonald, who cited ‘the ability to build buzz’ and the chance to network as reasons to continue with the trade show.” 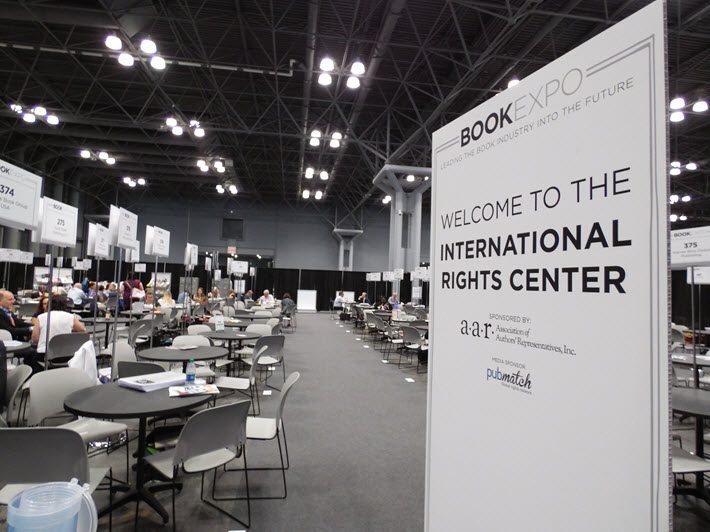 International: Not So Much

In terms of international exhibitors and their shrinking presence—particularly ironic after the organizers had spoken of dropping “America” from the name to signify more internationalism–McDonald is at pains to assure readers that he and ReedPOP are aware of the problem.

He writes, “We do recognize that our choice to make the event more compact on the calendar created challenges for domestic and international exhibitors that seek only B2B interaction and we are actively addressing those challenges.” His reference here is to the fact that once the trade show is reduced to only two days, the expense of traveling from overseas and exhibiting becomes harder to justify.

“Very soon,” he writes, “you will see a strategy that is more productive for these communities and in line with our commitment to a robust trade environment and…to strengthen distribution, rights and international business at the show.” The International Rights Center at BookExpo was an especially small-looking affair in a lonely corner on the southwest corner of the show floor this year.

The fan-happy BookCon event on Saturday and Sunday in its first years in New York, 2014 and 2015, appeared to be approaching its goal of 10,000 attendees per day. While the momentum was interrupted last year by the move of BookExpo America to Chicago, this year BookCon, pioneered by ReedPOP chief Lance Fensterman, roared back into the Javits and did, McDonald writes, reach that 20,000-attendee number for the weekend.

In his letter’s commentary on this point in the trade show’s development, McDonald lays out the rationale behind what’s happening, making the case for the continuation of the show in coming years. He writes: 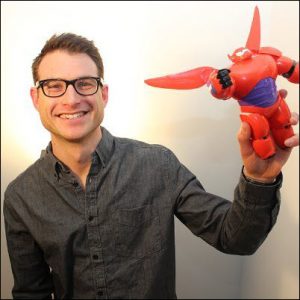 “Like the book industry, our event is in transition but the story remains the same …BookExpo is meant to create meaningful interactions in a focused professional environment while BookCon is built to directly connect fans with the authors and brands they love. They are both designed to energize and empower our industry.

“As we just experienced, BookExpo and BookCon are powerful platforms to launch books to your most important audiences: trade, media and readers. We are proud of the work we are doing with BookCon as it provides value to our customers in a rapidly changing market, but these changes will not come at the expense of BookExpo’s B2B environment. Serving the trade is more important and crucial than ever.

“BookCon was created to support and celebrate the powerful position readers hold while continuing to drive value to BookExpo. These two worlds must coexist at our events just as they do in the market. One will not grow at the expense of the other; it’s the combination of the two that make our events so invaluable.

“Last week gave us a lot to celebrate as an industry.”

In coming weeks and months, of course, much discussion will be heard in the industry about how this once-pivotal week in this fast-changing business fared. McDonald points to internal offerings such as a matching service for exhibitors and attendees, a roundtable for museum bookstore buyers, and a busy round of conference-style sessions on myriad topics, programmed for the company by Sally Dedecker.

Going forward, Publishing Perspectives will have more stories coming from BookExpo-BookCon week, and will watch, of course, for other reactions to this transitional year for the show. 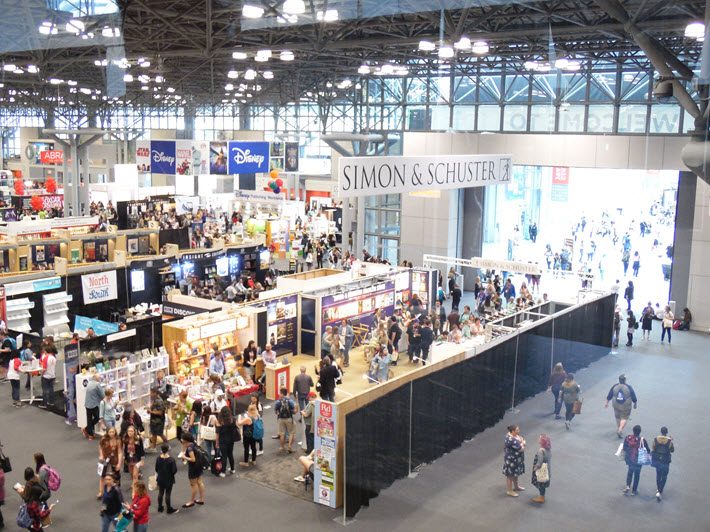 More at Publishing Perspectives from BookExpo and BookCon: