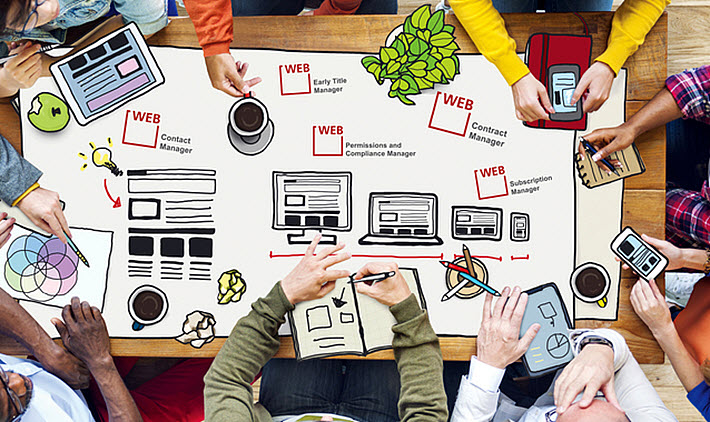 A father and daughter’s shared vision for a fully integrated publishing-house workflow environment is now in its fourth year, with its Rights Portal in place. 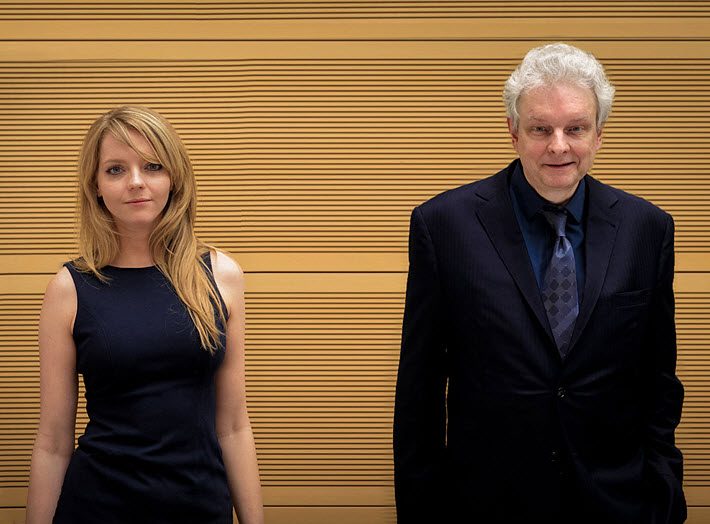 Father and daughter, the drivers of the development of Klopotek Stream: Nella and Ulrich Klopotek von Glowczewski. Image: Sven Serkis

Inside the Digital Workflow: Rights Communities

Several things have become clearer over time about what “digital disruption” means in the international trade publishing industry. They tend to fall into two areas: B2C and B2B.

“Publishers can build communities around the rights they’re offering. This can be a powerful tool for collaboration as buyers interact.”Nella Klopotek von Glowczewski

B2C, or business-to-consumer, effects include elements of the business that interface with the consumer, such as formats–ebooks, audiobooks, mobile, streaming formats. They might also include sales mechanisms, of course–online and off. They also include how consumers experience publishing’s authors–social media and more.

By contrast, B2B, or business-to-business, effects can be thought of to have more to do with internal structures, processes, and protocol—the workflow—encountered by publishing professionals. Rights sales on platforms like IPR License with its new Instant Rights we recently reported on are an example. The centricity of consumer data is another. And, more integrally, the systems that have to interact with each other–as publishing house departments have done in the past–are part of this internal update, as well.

In February, ahead of London Book Fair, Publishing Perspectives spoke with David Hetherington of the Berlin-based publishing software corporation Klopotek about the company’s Permissions and Compliance Manager  that handles the complexities of licensing agreements in a large publishing house.

By the time BookExpo arrived at the beginning of this month, Klopotek’s founding CEO and managing director Ulrich Klopotek von Glowczewski was ready to talk about a bigger canvas. And he sat in front of it, as his daughter Nella—Klopotek’s vice president for UX design and development—joined him on the Klopotek stand at New York City’s Javits Center.

Now in the fourth year of development, Klopotek’s growing, all-inclusive software project has cost some $6 million, says Ulrich Klopotek, “a figure I expect will double by the time we’re finished” building out the system. And he estimates that replacing a full legacy publishing house program with its new cloud-based Klopotek Stream system–which makes all the parts of the value chain communicate with each other–can be done in about nine months. 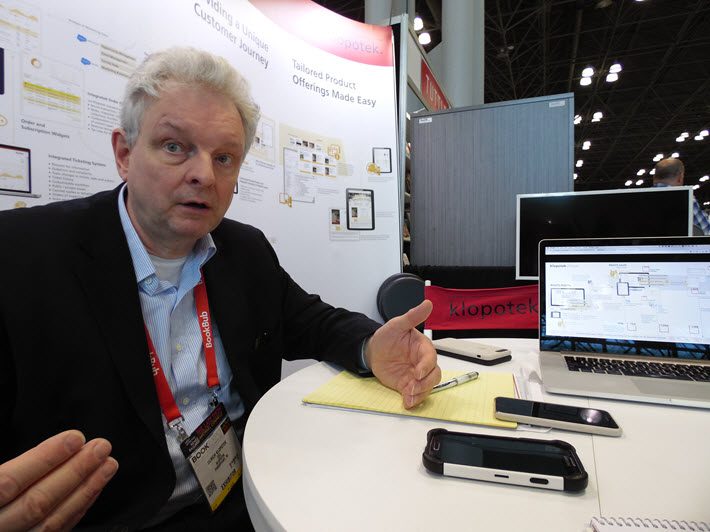 Drilling Down Into the Potentials

The sprawling picture behind Ulrich Klopotek puts permissions and compliance issues into place as just one part of an expanding, virtual ecosystem of interlinked processes that he expects will eventually encompass the complete operational structure of a publishing house, big or small.

“It’s our firm belief that rights will become more granular in the future.”Nella Klopotek von Glowczewski

The fundamental key to what father and daughter are building turns out to be flexibility. Klopotek Stream is the company’s branding for its Web-based platform, adaptable for each end-user in a publishing house’s workflow and accessed in the cloud.

And to hear the older and younger Klopotek talk about this together is to listen in on a high-level view of where the digital dynamic is taking publishing.

“Everybody can build his own user interface,” says Ulrich Klopotek. “If you want product information, you can zoom in from whatever source you like, and you can put this on the screen so that the marketing guys have a different view on products as someone else” in the operation.

The evolving complexity of these configurable capabilities, he says, is the real promise of what his company has spent at least three years putting together—and still is developing, with another year or so to go as various elements come online.

“A global publisher, spread over the world,” he says, “has a lot of people researching information.

“We have one customer with about 1,000 workers, several hundred of them doing product research,” he says. “They’ve put that into the cloud, and then you get your marketing people to add their marketing stuff, while pricing information may go into a completely separate and yet connected and accessible part of the program.”

Rights Buyers on the Inside

“Like the titles or series suggested in Netflix, Amazon, or Audible, it’s possible to show and offer the titles in the Rights Portal that a buyer is most likely to be interested in.”Nella Klopotek von Glowczewski

The Stream design operates as interconnected apps, each of which matches the needs of a user who accesses it. A process chain connects one app’s activities to another.

But one of the interesting aspects of this maze that Nella Klopotek focuses on is called the Rights Portal, “which empowers rights buyers,” she stresses, “so that rights holders and buyers can interact, by means of direct communication,” she tells Publishing Perspectives. “But also, and more importantly, the rights buyers are  creating interest profiles. Those buyer profiles tell rights holders what kind of content is being sought.

“It’s our firm belief,” she says, “that rights will become more granular in the future,” and the portal is meant to offer whatever level of granularity a buyer may be looking for and a seller may need to understand that buyer’s interests.

Transactions are handled by the system’s Rights Sales Manager, she points out, but a rights department’s staffers are expected  to keep their eyes on what those right buyers’ profiles are telling them.

“Like the titles or series suggested in Netflix, Amazon, or Audible,” she says, “it’s possible to show and offer the titles in the Rights Portal that a buyer is most likely to be interested in,” algorithmic selections servicing sellers and buyer communities. 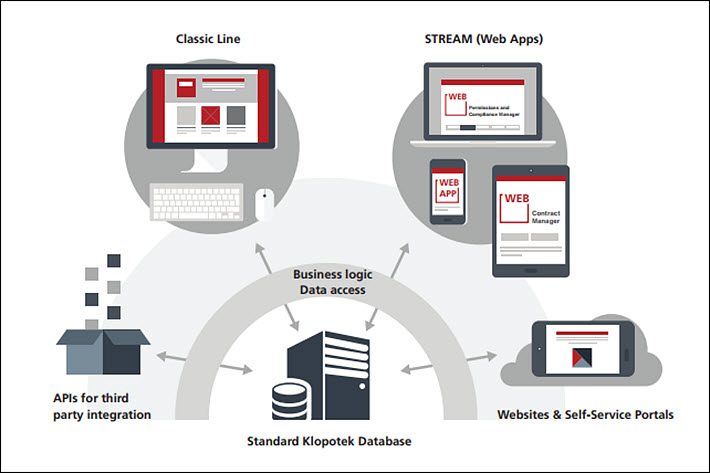 Klopotek stresses the ability to operate its Web-based technology on its classic systems. Image: Klopotek graphic

Ulrich Klopotek talks of installing software systems much earlier for STM and academic publishing, as with Elsevier and Peter Lang, than in trade publishing.

Today, HarperCollins, with its increasingly international approach, has become one of the biggest leaders in adoption of this software in the trade, Klopotek says, and he sees others following as global reach and complexity expands.

Klopotek says his company’s approach “to what we call ‘multi-local, multi-currency, and multi-language’ was born when we started working with Elsevier in 2007 and 2008 and started to understand what a technology like this needed to do.”

Klopotek, as a company, was established in 1992 in Germany and has been led by the industry’s needs and changes, both father and daughter agree. Nella’s involvement began in 2014, based on her experience of several years in computers.

Her father was also in computer science before moving to publishing. About two-thirds of the company’s work today is outside Germany, Ulrich Klopotek says.

Nella Klopotek adds one balancing point to her father’s emphasis on the technological basis of their work. “It helps that we know publishing so well,” she says. “To us, over 25 years, it’s become intuitive.”