From The Japan Times: By putting Japanese and American work together, ‘Monkey Business’ is now in its seventh year of creating a ‘hybrid space’ for literature.

At the The Japan Times, a Kyodo News report by Justin Maki describes how the literary journal Monkey Business is releasing its seventh annual issue this month, bringing, Maki writes, “innovative writing from Japan to a US publishing landscape that has comparatively little space for translated literature.”

Founded by editors Motoyuki Shibata and Ted Goossen, the magazine began as what Maki characterizes as an English-language counterpart to Shibata’s Japanese journal of the same name. 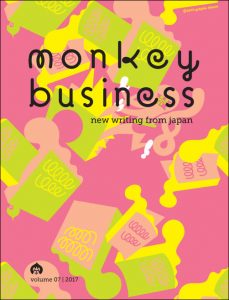 The journal’s content has included writings of such literary favorites as Haruki Murakami, Yoko Ogawa, and Hideo Furukawsa, published in translation with the work of leading-edge authors who write in English.

Co-founder Goossen, whose work as a translator includes much of Murakami’s work, tells Kyodo’s Maki that Japanese fiction provides readers “a different way of looking at the world.”

“That freshness” he says, “comes from looking at the world through a new lens–it can be scary, it can be funny, it can be revolting. But there’s an intensity.”

Shibata, speaking at the Asia Society in New York for the release of the new edition, is quoted saying, “I think Japanese literature these days is in very good shape.

“Some authors are realists and very good at depicting the difficulty of living in contemporary Japanese society,” he says. “Some are fantasists creating very surrealistic and absurd spaces, which has always been a strong element in traditional Japanese literature.”

Novelist Matthew Sharpe, also appearing at the Asia Society event, is quoted praising the journal and speaking about the influence Japanese literature has on his own work. “I feel my brain being reconfigured,” he says, “every time I read Monkey Business. The Japanese sense of story is very different from the American or Western sense of story and it always opens up possibilities for me.”

Shibata, whose translations into Japanese include work of writers including Thomas Pynchon, Paul Auster, and Kelly Link, created the original Japanese quarterly in 2008, drawing the title from the 1956 Chuck Berry song “Too Much Monkey Business.”

The English language edition, published by Brooklyn based A Public Space with funding from the Nippon Foundation, has found success both as an ebook and in a print run of 3,500 copies.

The new seventh edition includes stories by Rampo Edgowa and Taki Monma, translated by Goossen, along with what Maki writes are “the concluding installments of two longer works he had been translating serially since the journal’s debut.”

In summing up Goossen’s work, Maki writes that he frocuses on “breaking free of the bounds of both American literature and Japanese literature by placing them together, by creating a kind of new hybrid space.”

The full Kyodo News story by Justin Maki is in The Japan Times here.