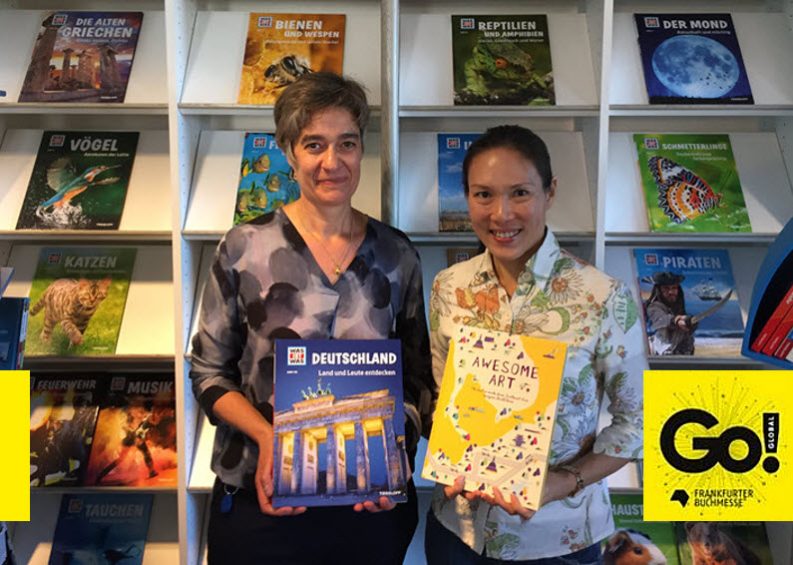 In an enlightening exchange of questions and answers, a German and Singaporean editor trade insights on their markets’ opportunities and challenges. 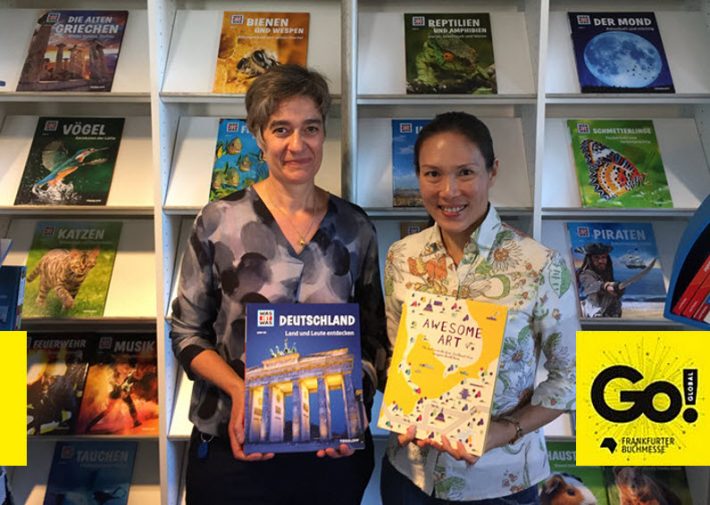 She Asked, She Answered

This month, a trip to Germany provided a chance for 12 publishers and editors from Indonesia, Malaysia, Myanmar, the Philippines, Singapore, Thailand, and Vietnam to visit with publishers based in Frankfurt, Nuremberg and Hamburg. 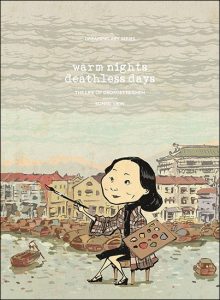 From National Gallery Singapore, a children’s book on artist Georgette Chen by an author and illustrator familiar to many in the West, Sonny Liew

During the itinerary organized by the international offices of Frankfurt Book Fair June 5 to 10, excursions were organized for the group to publishing houses, bookstores, illustrators’ studios, startups’ businesses, and and literature houses.

This was one of three “editors trips” created in support of international market exchanges by Frankfurt. 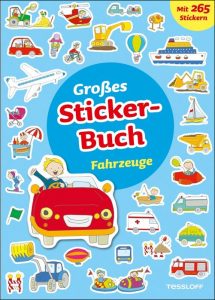 From Germany’s Tessloff Verlag, a sticker book for kids on vehicles

In another, Frankfurt Book Fair New York arranged for publishing professionals from the United States, Canada, and the UK to visit German counterparts in Munich, Ravensburg, Stuttgart, and Frankfurt, and you can read about that one here.

And in the third, Russian art-book editors will be in Germany between June 20 and 29 on a trip that’s related to Frankfurt Book Fair’s THE ARTS+ program, which will be in session for its second year in October.

As one early result of the Southeast Asian editors’ trip to Germany, we have an unusually formatted dialogue here between Helga Uhlemann, communications and international business director with Nuremburg’s Tessloff Verlag, and Elaine Ee, deputy director for content publishing with the National Gallery Singapore. 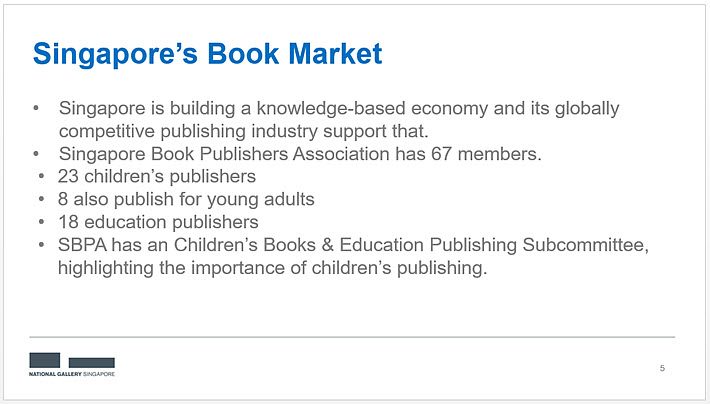 Elaine Ee: The children’s book market is definitely strong in both Singapore and Southeast Asia but we don’t have any definitive statistics on it.

I can share that there are 23 children’s publishers in the Singapore Book Publishers’ Association—out of about 67 publishers in total—and that about 40 percent of what a person spends on average per year on books goes to school textbooks and educational books.

Southeast Asia as a region is very diverse and its publishing industry is still developing in some countries. Regional book market data is hard to come by. Country-by-country data, however, does exist. 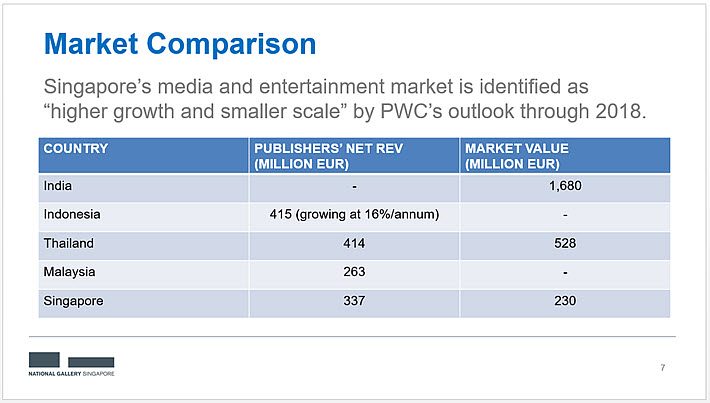 In this slide from Elaine Ee’s National Gallery Singapore presentation, some of the available country-by-country data she refers to from Southeast Asia is included

‘Cost Is a Big Factor in Southeast Asia’

HU: How can children’s nonfiction titles be made so that they’re interesting for Southeast Asian publishers?–in terms of material, design, subjects, text, concept, kind of illustrations and/or pictures? Are digital add-ons on books important to be successful in your market? 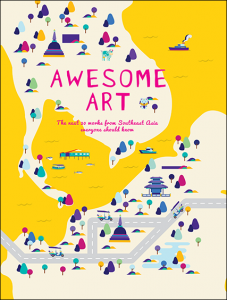 EE: Again this varies. Southeast Asians are very used to Western content as that has dominated publishing and media, and so they’ll readily accept books with Western subjects, settings, people, and so on.

Digital add-ons help in markets where smartphone penetration is high, mobile connectivity is good, and the population is technologically savvy, as in Singapore or the urban centers of some of the other more developed Southeast Asian countries. But they’d be less relevant in the less developed areas.

Cost is a big factor in Southeast Asia. A significant proportion of Southeast Asians don’t earn very much—either their salaries are low and/or their currency is weak. And so they can’t afford to pay much for books. For example, in Vietnam, a children’s picture book sells for only one or two US dollars. In Singapore, however, the price is much higher–eight to 15 US dollars for children’s paperbacks and up to 25 dollars for a hardback.

The middle class in Southeast Asia is growing, though, so the volume of sales and perhaps prices, too, have the potential to increase.

HU: How do you distribute children’s books books, fiction or nonfiction? More or less through bookshops? Or even through schools or door-to-door? How important and/or strong are sales through online bookshops? And are publishing houses that aren’t schoolbook publishers allowed to sell books directly in schools?

EE: Book distribution is divided roughly evenly between bookshops and libraries, with approximately 23 percent of book sales coming from online sources [as can be seen below in the graphic about reading habits]. But Amazon has leased warehouse space in Singapore and is hiring staff, so online sales in the region might increase.

Small book fairs in schools are common. Publishers of children’s books that aren’t textbook publishers organize these fairs and do a roadshow. Scholastic, for example, has done this. 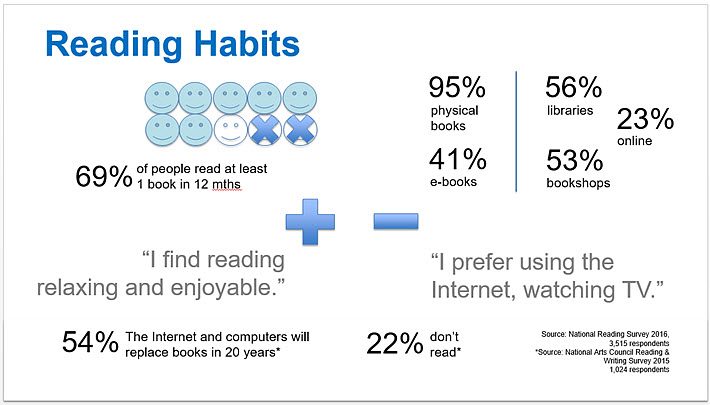 ‘English Is the Lingua Franca in Singapore’

HU: Are there German children’s book titles that are especially successful in Southeast Asia or in Singapore specifically? Possibly a well-known series or a character or from an author? 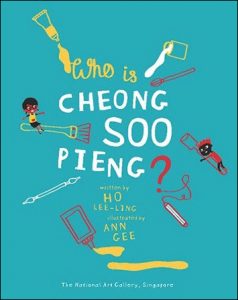 EE: Not that I know of. Books distributed in Singapore are mainly in English, and imported directly from English book markets like the UK, the US, and Australia.

HU: Singapore bookstores sell a lot of books in English and Chinese. Do you import the books from foreign publishers or do publishers in Singapore buy rights for their territory and publish? And what are average first print runs?

EE: English is the lingua franca of Singapore, and also the language of administration and education. Many Singaporeans are bilingual, with a command of English and their mother tongue. So, as I mentioned, English books are simply imported directly into the country. The same for Chinese language books.

Average print runs in Singapore are small, from 1,000 to 2,000. Only textbooks or titles that get adopted by schools’ reading lists are printed in larger quantities of about 10,000.

HU: Do educational state-funding programs exist in Southeast Asian countries? For example, are there cases in which the state makes large orders of children’s books to give to school or public libraries?

EE: Singapore’s public libraries are very well funded by the government, which keeps them well stocked.

HU: How about the library market? Is it important for publishers there?

EE: About 50 percent of Singapore’s readers get their books from libraries so I would say yes. There’s a good network of public libraries in Singapore. 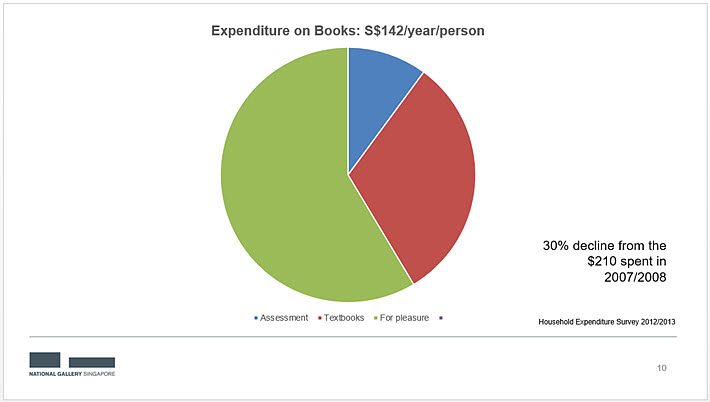 A slide from Elaine Ee’s National Gallery Singapore presentation. At this publication, a Singapore dollar is worth about three-quarters of a US dollar.

‘Understanding Each Other’s Markets and Cultures’

HU: If you were to buy rights from a German children’s book publisher, what would be most important for you in a long-term partnership?

HU: How important are ebooks in your children’s book market? If they’re important, can you pinpoint for which type of book and age group?

EE: In Singapore, we increasingly see books with an e-component, for example an app or Web site. But ebooks, themselves, have not taken off.

HU: Which age group of children do you think is the most important in the next years in your markets?

EE: This is just my opinion, but people in Singapore are having fewer children. We see smaller families, and they tend to invest a lot in the children they do have, especially when the children are little. So I would say the book market for children up to 12 years is crucial. 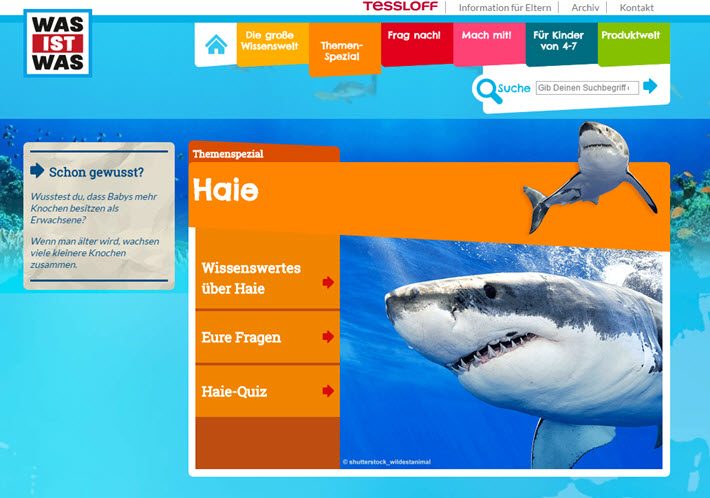 There’s little translation needed to know what the subject called ‘Haie’ is in Tessloff Verlag’s long-running ‘WAS IST WAS’ nonfiction series for children. Image: wasistwas.de

Elaine Ee: What have been some of your bestselling products, and why?

Helga Uhlemann: The WAS IST WAS (What’s What) book series–a nonfiction series for children aged 8-12 years. Volume No. 141, Archaeology, will be released in September. We’ve published the series since 1961 and books in it have been updated several times during the last 50 years.

In 2013, we began reworking the entire series, and we now have 70 volumes available in the new format.

We work very closely with science journalists and experts, to be sure we provide the most up-t0-date information.

WAS IST WAS is meant to inspire young people and make them curious to learn more. So young readers dive into subjects such as general as dinosaurs, ancient Rome, robots, butterflies, and volcanoes, and as specific as Secrets of the Deep Sea.

In German-speaking territories, a large part of the population, aged 60 and younger, have grown up with WAS IST WAS and have positive memories of the books. So they buy them now for their children and grandchildren. That’s why WAS IST WAS today is the leading nonfiction book series in Germany.

It has also has been sold very successfully to international publishers in Eastern Europe and Asia. Some of them have been publishing the series for more than 20 years.

So WAS IST WAS attracts children through a range of approaches, as “pure knowledge” and through more playful formats, through audio or through our online magazine wasistwas.de.

‘A Good Moment for Strong Exchanges’

EE: How has children’s publishing changed for you in recent times? 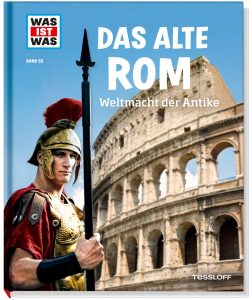 HU: The preferences of our target groups are changing. The reading abilities of children and the ability of concentration to read long texts is lower today than, for example, 20 years ago.

For example, when we reworked the WAS IST WAS series, the concept was to give more structure to the books and make them more accessible with humor and a higher percentage of images to text.

EE: And lastly, what do you observe about children’s publishing in the different international markets you sell into or buy rights from?

HU: Worldwide, the markets are always changing. Many markets at the moment are very open to children’s books and educational books.

Because of modern technologies, selling and buying rights is much easier. And a lot of foreign publishers, especially in highly digital territories, see the importance of children’s use of books from the earliest ages.

So, overall, we see this as a good moment for strong exchanges between publishers worldwide.