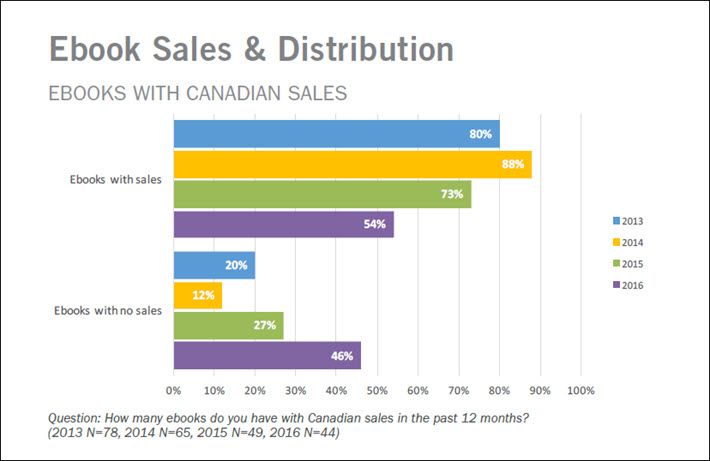 Toronto-based Kobo and Seattle’s Amazon are neck-and-neck in Canadian publishers’ use of ebook retailers, BookNet Canada finds. And ebook sales are down while digital revenue is up for some. 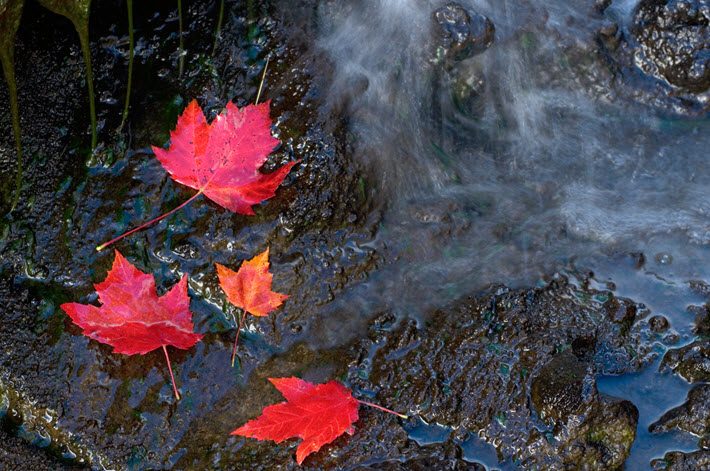 In its newly released (June 6) State of Digital Publishing In Canada report for 2016, BookNet Canada cites rising digital revenue reported by 61 percent of responding publishers in 2016.

One in four surveyed publishers, according to the study, logged an increase of “at least 25 percent in digital revenue over the previous year.”

This, of course, will raise eyebrows among industry leaders in the USA and UK, where “the ebook plateau” has become a favored meme and a “print resurgence” is a much-valued concept.

But there’s an interesting flip side to this. “At the same time,” write staffers of BookNet—the nonprofit service group for Canadian publishing—”the percentage of ebooks with sales has declined once again, from 88 percent in 2014 to 73 percent in 2015 to 54 percent in 2016.

“The publishing firms surveyed for the study reported that, when taking into account their entire digital catalogs, 46 percent of their available ebooks saw no sales in 2016.”

The BookNet group goes on to write, “Possible factors contributing to these changes could be the continued digitization of backlist titles, thereby increasing the overall volume of available ebooks in the market, as well as the 2.1-percent decline in ebook sales between 2015 and 2016 in the Canadian market, according to regular consumer surveying by BookNet Canada.” 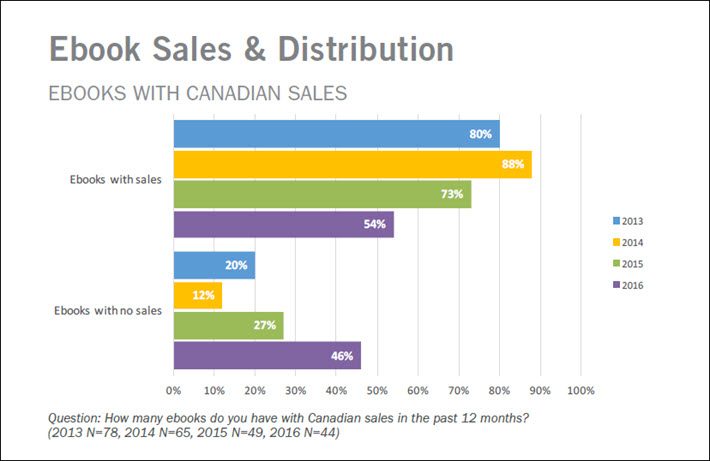 “According to research conducted by BookNet Canada, in a series of surveys of book-buying Canadians, ebook sales in Canada declined by just over 2 percent between 2015 and 2016 (from 19 to 16.9 percent).”BookNet Canada statement

And notes on several other talking points from the report read this way: “Other highlights include a significant increase in the number of publishers producing digital audiobooks–which rose by 11 percent over 2015–and a 20-percent jump in the number of firms utilizing the agency pricing model for their ebooks. In 2016, 71 percent of [Canadian] publishing firms reported using that model.

“When it comes to ebook retailers, Kobo continues to be the most-used by publishers (96 percent), followed by Amazon (93 percent) and Apple (84 percent).”

Michael Cader at Publishers Lunch is offering an important caveat, noting that The State of Digital Publishing in Canada, an annual report, is a survey of 50 responding publishers, not the marketplace data exercise we frequently see conducted by Nielsen or NPD and others.

It’s interesting, though, to note that communications with the report from Toronto include this commentary from consumer survey work: “According to research conducted by BookNet Canada, in a series of surveys of book-buying Canadians, ebook sales in Canada declined by just over 2 percent between 2015 and 2016 (from 19 to 16.9 percent).

“The US and the UK have seen a similar phenomenon; in data reported directly by publishers, ebook sales have declined by 4 percent in the UK, and in the US the Association for American Publishers reported a drop of 14 percent between 2014 and 2015.”

This is the backdrop, then, against which these new snapshots of the Canadian market are drawn.

The Question of Digital Staffing 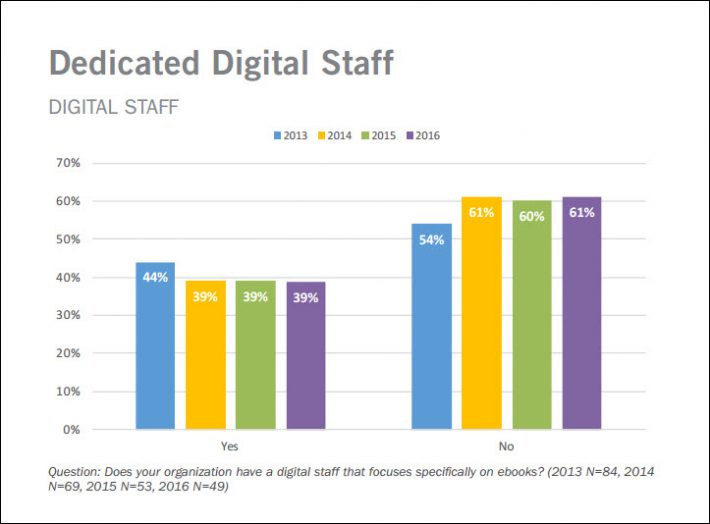 What’s asked of respondents by the BookNet survey in terms of a publisher’s dedicated digital staffing is the question, “Does your organization have a digital staff that focuses specifically on ebooks?”

The results show a relatively static response over the years in which the majority of responding publishers have answered no–no dedicated digital staffing. 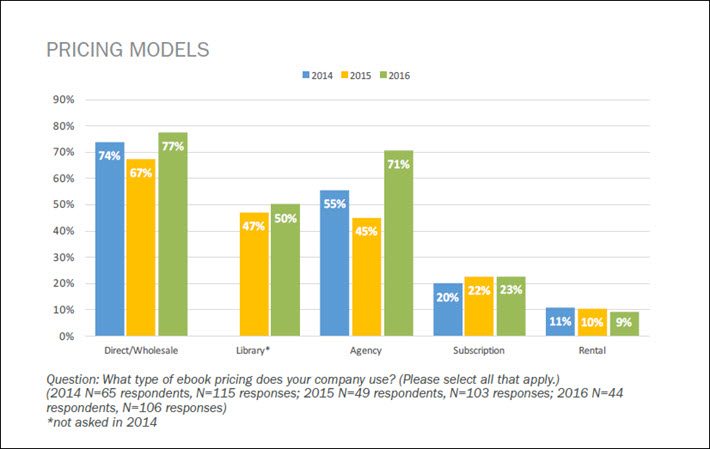 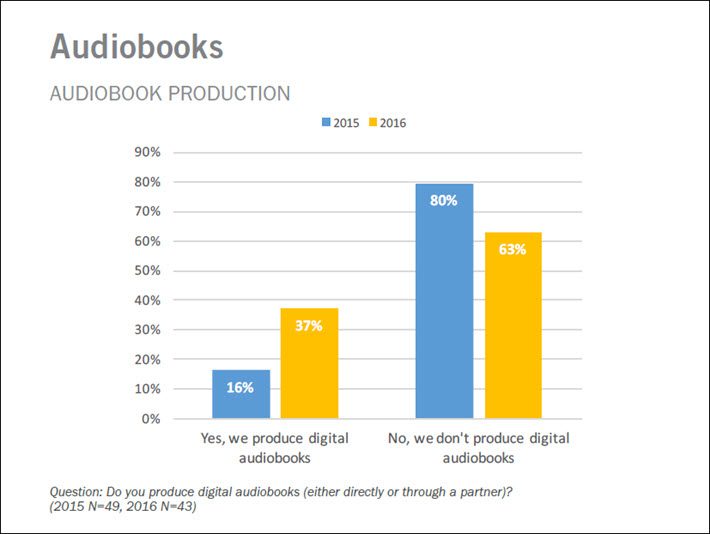 In its discussion on the subject of audiobooks, BookNet Canada writes, “In 2016, 37 percent of firms reported producing digital audiobooks; this number is up from 16 percent in 2015.

“Publishers reported having anywhere from zero to more than 7,000 active audiobook titles in 2016. The majority of respondents [say they] sell their audiobooks with Audible (69 percent), followed by OverDrive (50 percent) and Apple (44 percent).”

More is available from BookNet Canada, the full survey running to some 30 pages. You can see the full presentation here.