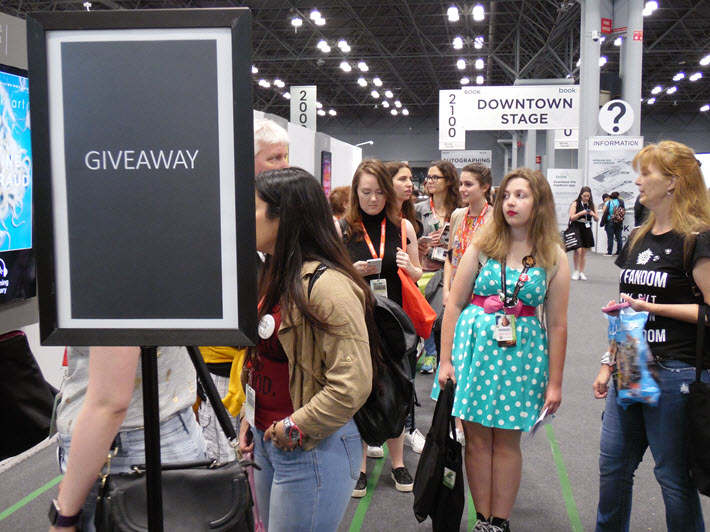 Amid cheers for YouTube stars and dramatization producers, BookCon 2017 gets a lot of free books into eager hands, the follow to ReedPOP’s shortened BookExpo. 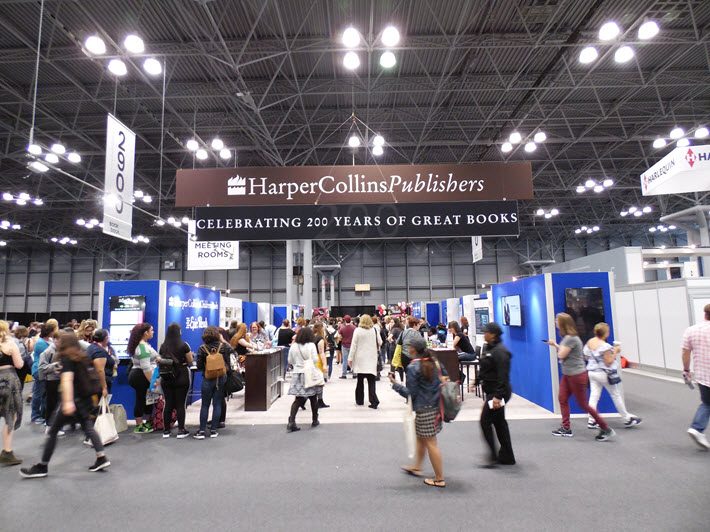 The consumers arrive. HarperCollins at Day One of BookCon 2017. Image: Porter Anderson

While BookExpo certainly has a lot of signage—as do all publishing trade shows, after all—here is the message on a sign you may not have seen near the Downtown Stage at Jacob Javits Center in New York City last week:

“Please keep your hands to yourself.

“If you would like to take a picture with or of another BookCon fan, always ask first and respect that person’s right to say no.

“When at BookCon, be respectful, be nice, be cool, and be kind to each other.”

That charming bit of messaging—under the heading Cosplay Is Not Consent–may have helped drive home for industry visitors on Saturday and Sunday (June 3 and 4) that they were no longer in familiar BookExpo territory.

BookCon, now in its fourth year, remains instructive to the industry because of the sharp differences between its intent, its tone, and how the trade show looks through consumers’ eyes. 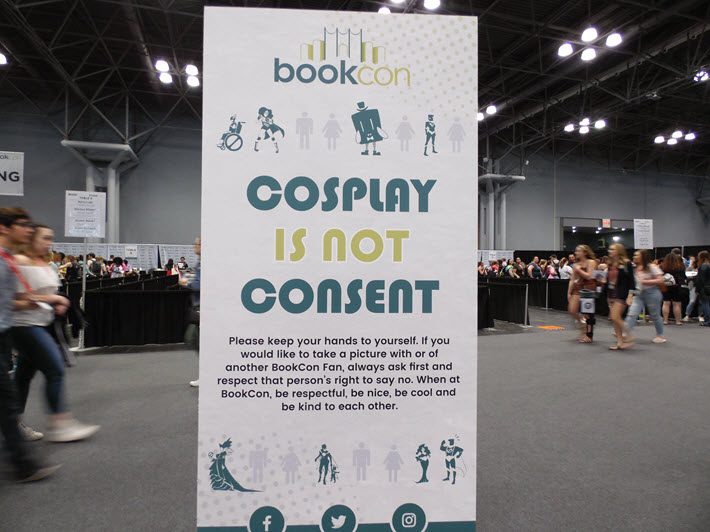 No attendance figures have been released at this writing, but as diminished and quiet as this year’s BookExpo appeared to be at the Javits on Thursday and Friday (June 1 and 2), several industry pros told Publishing Perspectives that they wonder if Expo is worth doing at all: maybe the public-facing BookCon should be the whole thing, they said.

As was mentioned in a story by Publishers Weekly‘s Jim Milliot, writing orders from booksellers isn’t a main part of the show, as it once was. And the International Rights Center was a relatively small, draped spot on the southwest corner of the floor, its tables all but empty by late morning Friday–nothing like the booming business hubs these rights centers are at London Book Fair and Frankfurt Book Fair.

It’s hardly surprising, then, that part of what makes the BookCon exercise so interesting—led by ReedPOP’s Lance Fensterman and his team—is that the “con” mode is so much about floor-roaming enthusiasm and is fulfilling that, while the business-driven show is all about highly targeted financial goals, sales, and may not be as capable as it once was of fulfilling those needs.

When you’re at BookCon, for example, you realize that the consumer crowd finds decor is just as interesting as books. On Saturday, it was springtime for the late L. Ron Hubbard as BookCon goers posed with a big armored figure at Scientology’s “L. Ron Hubbard Presents Writers of the Future Volume 33” display.

And the most popular posted message at BookExpo is, hands down, one that says “Giveaway.” It doesn’t seem to matter which book or which author, which publisher or imprint; the single word “giveaway” drew long, patient queues everywhere on the floor. 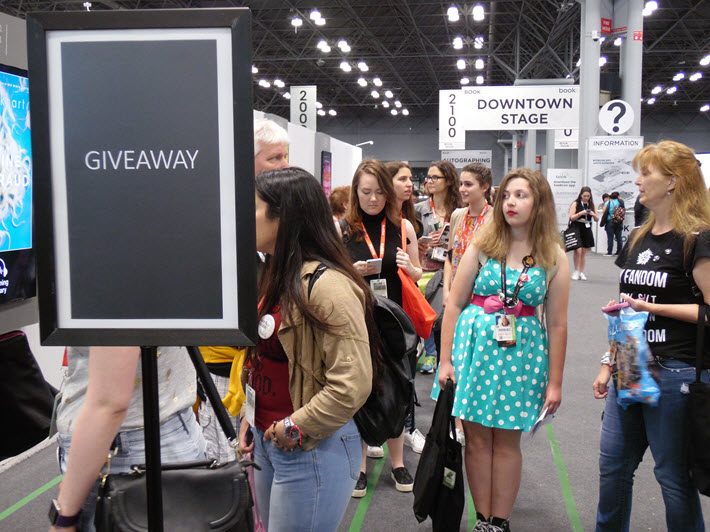 The sign that outdraws all others at BookCon: “Giveaway,” this one outside the Penguin Random House stand. Image: Porter Anderson

If you’re a frequent BookExpo goer, you might remember when it was decreed years ago that rolling suitcases would no longer be allowed on the show floor so that attendees could walk around without falling over those things. BookCon apparently doesn’t have such a rule and quite a number of con-sters had come with bags they stuffed with free offerings.

Ingram Content Group, which as we’ve reported, had the biggest stand at BookExpo this year. The stand transformed its space during BookCon days to appeal more to consumers by creating a theater space and daylong program from its self-publishing division, IngramSpark. 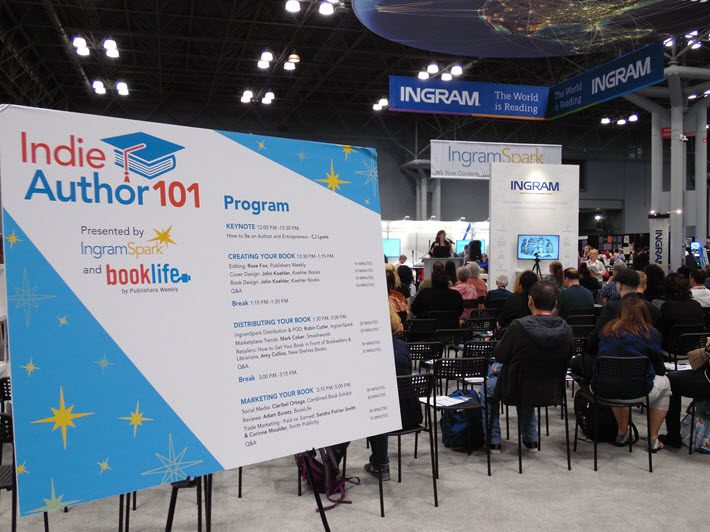 At IngramSpark’s self-publishing program on the floor of BookCon. Image: Porter Anderson

BookCon took a hit in programming with the cancellation by author Dan Brown, reportedly because of a family medical emergency.

Penguin Random House’s stand, cornered by four autograph desks, was mobbed by BookCon fans lining up for books featured hourly on both the Penguin and Random sides of the installation.

A stand like Disney’s was sure to draw fans to its familiar logo, but the little tables-and-chairs Author Market area for indies also drew lots of chatting BookCon attendees who are, of course, far less likely to discern differences between industry and independent output. 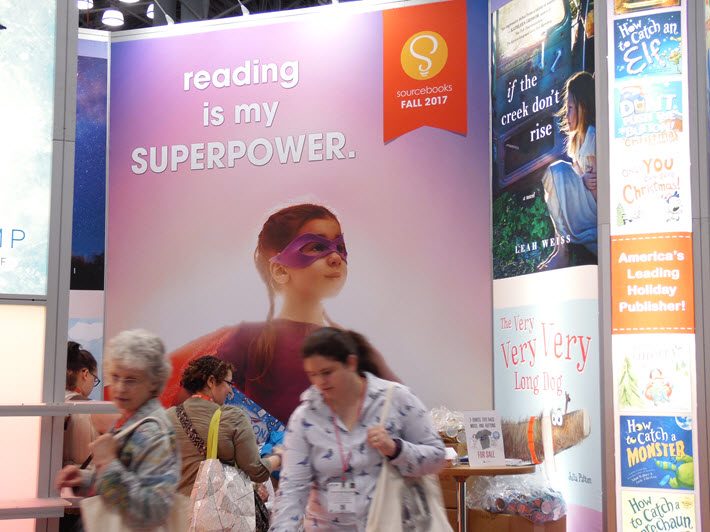 Sourcebooks’ stand had steady round of traffic from younger con visitors who, this year, may have comprised more males than in past years. Still primarily a women’s draw, BookCon nevertheless produced a well mixed audience for a discussion on diversity on one of the floor stages. 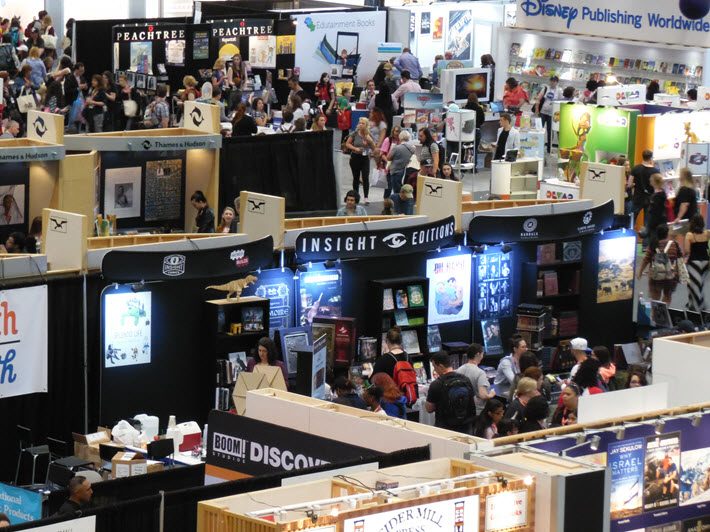 What remains a question about BookCon, of course, is how much it actually promotes reading. It’s an important question that some good survey work might help us answer with solid data.

Margaret Atwood, for example, made an onstage appearance—not with an editor or agent or publisher but with her showrunner, Bruce Miller, on Hulu’s TV series based on The Handmaid’s Tale. It’s probably a new token of success to arrive with one’s showrunner, and nobody has earned it more profoundly than Atwood. What’s more, Miller is a master in his own field, and the arrival of the series is something to applaud. But how many attendees came out ready to read the book, and how many left wanting to watch Miller’s excellent 10-part production?

YouTube stars and actors from film and television are frequently the big draws at BookCon, a grinning, goofy class of celebrity that can spin off books, yes. But these talented folks’ careers aren’t rooted in reading and, as we know, video is one of the many historically unprecedented electronic entertainments that can easily run off with one’s reading time. (If that hasn’t happened to you yet, it will.) How does video watching translate into book reading? Do we know the mechanism yet?

To a degree, it’s all good, of course, for storytelling. But what the industry will be assessing as BookCon matures is whether the party-con free-stuff mentality of the event can bond attendees to buying literature. Does BookCon send them home as readers? Time will tell.

BookCon continues on Sunday (June 4) with its second of two days at the Javits Center. 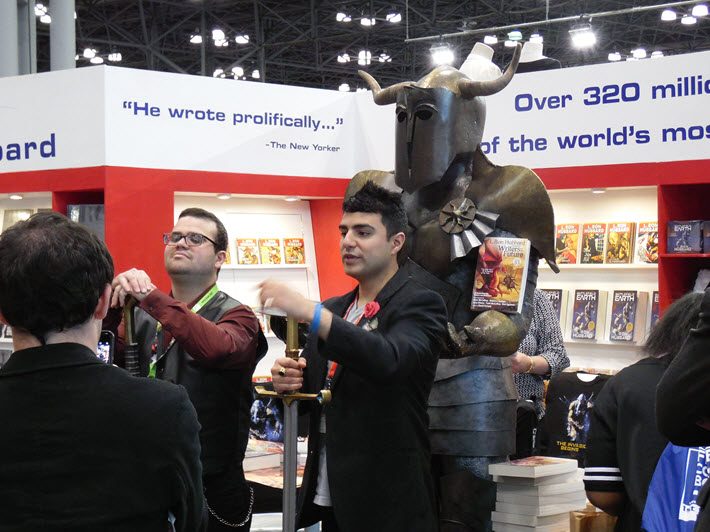