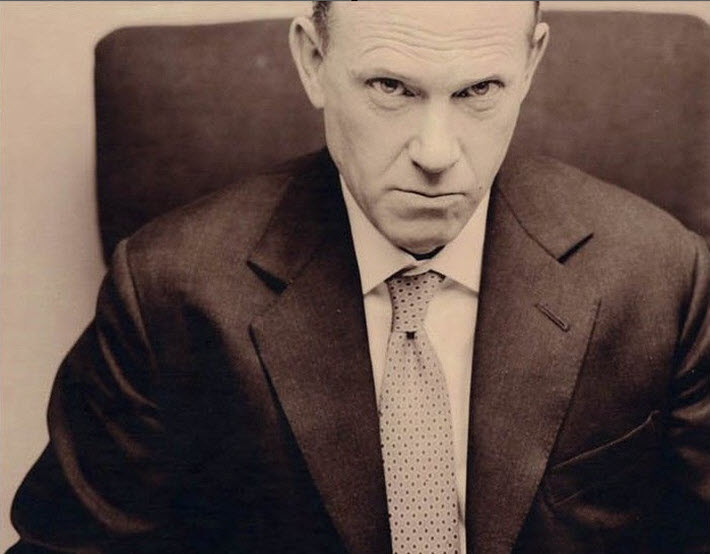 In his keynote at Frankfurt’s The Markets, the arch-agent Andrew Wylie will demand that the books world stare down the forces of nationalism in today’s political furor: ‘The publishing world is in opposition to this.’ 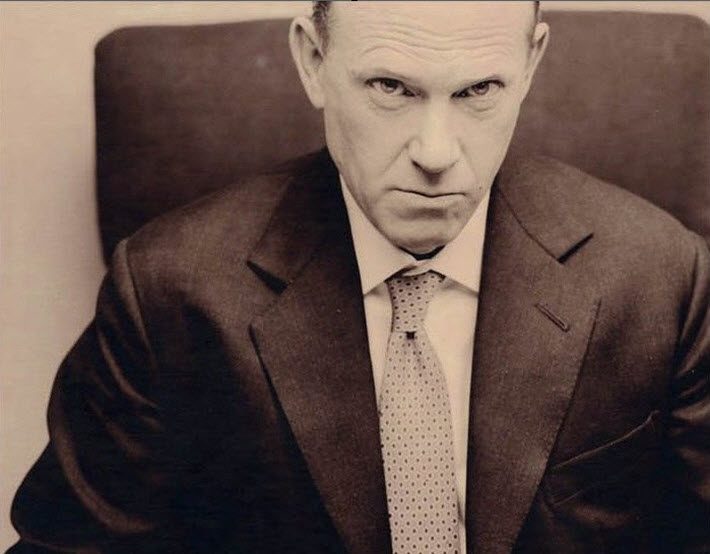 ‘At Odds With the Nationalist Agenda’

In a year in which nationalist and populist dynamics have seized so much of the world’s time, energy, and attention, Frankfurt Book Fair has devised its flagship Business Club conference, The Markets, to reflect on “Change: A 360-Degree View” from France, India, Southeast Asia, the UK, and the USA. More information on The Markets is here.

Opening the half-day event with a keynote address, the celebrated New York and London literary agent Andrew Wylie will tackle the mounting dilemma of what might be termed publishing in time of politics. On a Trumpian landscape, where does publishing stand? And what does it stand for?

Publishing Perspectives has spoken with Wylie to get his early thoughts on the mounting sense of crisis that affects not only the United States today but also Brexitian Britain, Duterte’s Philippines, many parts of Europe, Kim’s North Korea, and every nation that detects the tremors in its online security when cyber-sorties are launched from Moscow. 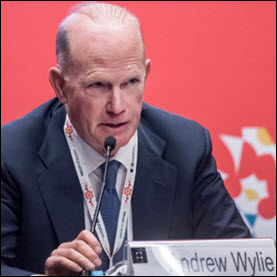 Even in November, when he spoke for the first time in Mexico at the Guadalajara International Book Fair, Wylie insisted, “What was critical in the development of our agency was the understanding that you have to have authority in every market.” It is, he said, “critically important that we always think about the global picture.”

And now, as the fog of extremism blurs leaders’ judgment—and artless incoherence grips geo-political capitals like Washington and London–Wylie has intensified his message with his gaze: “The publishing world is in opposition to this.

“And it’s not simply a business question,” he says. “It’s also a profound moral question. Is it justifiable to be nationalist? Is that a satisfactory equation for an individual as well as for a society? The answer is a resounding, ‘No. It’s not.'”

It’s helpful to remember that while Wylie, of course, has focused his work on the “upper end of the market” of literature and nonfiction—and without criticism of more commercial work, he hastens to add, but simply as his natural milieu—he has represented some of the most visible of politically positioned clients, in the widest sense. Here are King Abdullah II; the estates of Diane Arbus, Ralph Ellison, and Saul Bellow; authors Eimear McBride, Al Gore, Mo Yan, Milan Kundera, and many more.

“Is it justifiable to be nationalist? Is that a satisfactory equation for an individual as well as for a society? The answer is a resounding, ‘No. It’s not.'”Andrew Wylie

And having been exposed so thoroughly to the writings and thoughts of so many in the field of current affairs, Wylie may be experiencing less shock than some are today.

“The rise of nationalism, including in the United States, but also through Europe and even in Asia, has underscored the importance of internationalism—as a subject and as an approach to the markets for the publishing community and for writers.

“This has been coming for a while,” he says, “although it arrived as a great surprise to many people. The seeds of it have been planted earlier.

“So I think publishers have anticipated this and have acted against it, the larger publishers becoming more international in their approach, not only to their business but also to the books that they publish. There’s a concerted effort underway in the United States for the publication of more writers from around the world, both in other languages and in English. And I think that other countries are looking at the world from an international perspective as well as a national perspective.

“The publishing world, and writers, are at odds with the nationalist agenda.”

Wylie says he agrees with the suggestion that the United States’ percentage of readings in translation has moved beyond the proverbial three percent: political pressure to close minds may actually be helping to open them in resistance.

Choices: ‘What Makes It Easier to Get Up in the Morning’

“The greatest works of literature and most significant works of nonfiction really help us understand not only the world around us but also ourselves.”Andrew Wylie

As he directs his staff toward an ever more internationalist client list, Wylie talks of how the concept of being a small agency is “necessarily limiting,” hence his decision years ago “to look at being able to expand infinitely without a decline in the level of service that we can provide to the clients we represent.

“It has a lot to do,” he says, “with the use of automated systems and the Internet. So there are a lot of efficiencies that have arrived in the course of the last decade to allow us to build on those efficiencies and handle things faster and more seamlessly.”

Like many in the business, Wylie has noted the arrival of so much strong cinematic television production today and likens the choice he makes for his own interests, as others do, to lean toward the best of that work. “Extended-form cable television shows can produce works of art. Whereas daytime television is a different thing–important to the business but not where the more interesting work is being done.

This, he says, with a wry laugh, “is what makes it easier to get up in the morning,” if that’s one’s interest in where in the industry to concentrate. “The greatest works of literature and most significant works of nonfiction really help us understand not only the world around us but also ourselves.”

“Many African writers are engaged at a very deep level on questions of internationalism because many of the writers travel between Nigeria and the United States.”Andrew Wylie

“For us, one of the most important developments of recent years,” Wylie says, “has been the rise of young African writers. Many of them from Nigeria but not only from Nigeria. They’re from across Africa. These works are necessarily political as well as purely aesthetic. 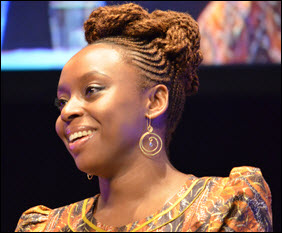 As an example, he points to the author Chimamanda Adichie  (Americanah, Anchor, 2014). Born in Enugu, Nigeria, she’s a 2008 recipient of a MacArthur grant, and a Booker, Baileys and Dublin International Literary Award nominee.

“She has many younger writers now,” Wylie says, “who have been favorably influenced by her.”

He does note that such periods of a region’s cultural turn inward can be changed when a form begins to export strongly, as has happened in Scandinavia, with the international popularity of “Nordic noir” eventually contributing to cross-border interest in deeper work.

“With the rise of interest in thrillers from Scandinavia, you also have a figure like Karl Ove Knausgård,” a Wylie client, “who has really broken down the traditions of Scandinavian literature and global literature with My Struggle, the six-volume autobiographical novel he wrote that’s being published all over the world”–in English, in the translations of Don Bartlett.

And what of the Arab world, which is being led in its cultural development so strongly at the moment by such centers as the UAE’s Sharjah? 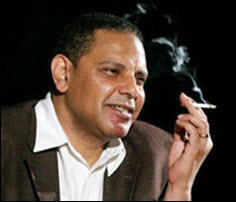 “We represent Alaa Al Aswany,” Wylie says, referring to the Cairo writer of The Egyptian Automobile Club (Penguin Random House, 2016, Russell Harris translator). “You see there the question of what’s happening in Egypt and the pressure the government may or may not bring on writers and publishers to conform to an ideology that, for a writer, is pretty unappealing.”

And then he returns to the promise of Africa’s development of new writerly depth, clearly deeply impressed with this movement: “It’s showing continued strength and extraordinary variety,” he says. “It’s not as if three people are writing similarly. There’s a tremendous disparity of approaches to fiction coming out of the continent.”

And this is what brings him to the key message he’s developing for Frankfurt.

When it comes to publishing–as evidenced by its sheer discernment of something as powerful as the last 10 years’ surge of African talent–Wylie’s sense of the moment’s urgency is evident.

Nationalism? No. “The publishing world is in opposition to this,” he says, taking in the isolationism and exclusivism of such a disturbing time in political regression.

And Wylie expects the industry to keep moving forward on that “profound moral question.”

“You want a writer like Camus pointed to, an engaged writer–a writer who engages in the issues of the day.”Andrew Wylie

Wylie agrees eagerly–”yes, yes”–when it’s suggested that one oddly positive effect of so much political upheaval is that we’re thinking and talking more of morality, itself. It’s a time, he’s saying, to know what’s moral and what publishing’s essential role is in promoting and safeguarding the freedom of expression it takes to defy these darker forces.

And he reaches into that bracing list of almost a thousand clients and deftly chooses the perfect estate in his portfolio for this moment.

“You want a writer like Camus pointed to,” he says, “an engaged writer–a writer who engages in the issues of the day. Not only on a personal level but also on a political level.”

We could use Albert Camus now, couldn’t we?

“We could,” says Andrew Wylie.

Andrew Wylie will be heard in his conference-opening comments at Frankfurt Book Fair’s The Markets conference on October 10 in the Business Club (which has a 20-percent discount until August 31). More details about the program are here. Frankfurt Book Fair’s dates this year are October 11-15, and for the first time tiered pricing is available for trade visitor admission. Currently, a 30-percent discount is available, until July 31. More details are here.