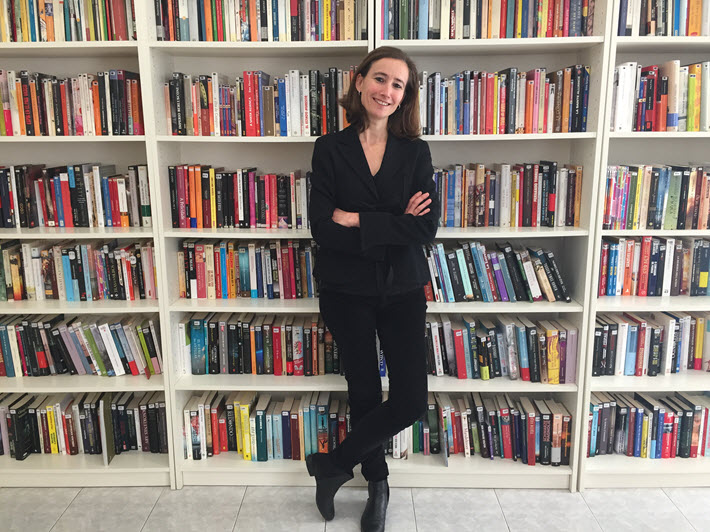 While ‘most agencies work with sub-agencies in different countries,’ Anna Soler-Pont’s literary agency has been doing it all for a quarter of a century. 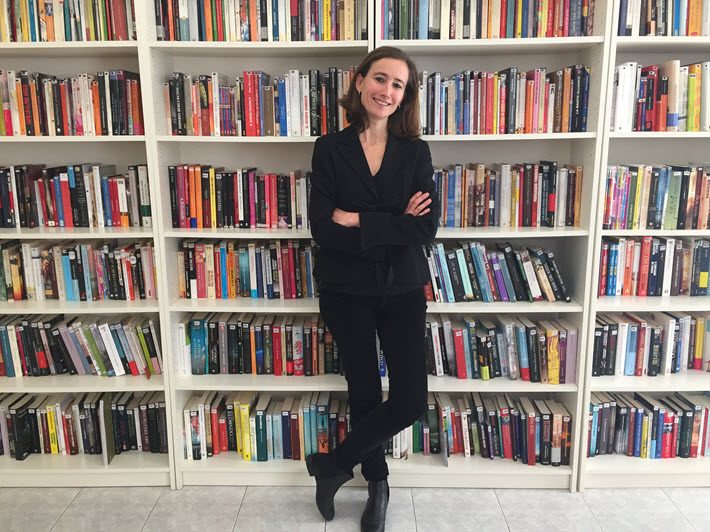 Handling Jobs ‘That Used To Be the Publishers’

Barcelona-based Pontas Agency, which has expanded into films as well as books, celebrated its 25th anniversary last weekend by inviting more than 45 of its authors to a celebratory meal and open house at its offices.

The timing coincided with the festival atmosphere of the city’s La Diada de Sant Jordi, also known as the “Day of the Book”—when everyone is on the street buying books and roses.

For the agency’s founder, Anna Soler-Pont, the anniversary marks the culmination of a passion that began with a journey to Cairo in 1991 to meet a literary hero, the Egyptian novelist Naguib Mahfouz. He introduced her to writers who pressed manuscripts into her hands.  That in turn led to an extraordinary road trip across Asia to find more authors.

Soler-Pont operated alone then, but there are nine people in the company today, including her co-partners Ricard Domingo, former publisher at Planeta Group, and Marc de Gouvenain, former editor at Actes Sud.

Pontas has been shortlisted for the Literary Agent Award at the London Book Fair’s International Excellence Award three years running. And the agency she founded has a specific approach to what it does, as she tells Publishing Perspectives in an anniversary interview.

Publishing Perspectives: What are you most proud of? 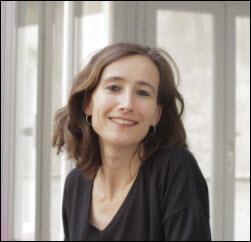 Anna Soler-Pont: I’m proud of the success of the authors we represent and of providing good international service to our clients so they can devote their lives to writing. I’m also proud of having succeeded in the most challenging journey of all: going from a personal and self-made project to a professional and profitable business without losing passion or the will to learn every day.

PP: What do you think makes the Pontas Agency different?

AS-P: The fact that since the very beginning we’ve been acting as primary agents for authors living in so many different continents and countries—writing in an average of 10 different languages (those the team can read and help with)—is quite unusual. This model is being adopted by some other agencies, but I believe the Pontas Agency was a pioneer.

Very few literary agencies do what we do. The usual way of working has always been representing authors writing in one language, from one culture. And most of the agencies work with sub-agencies in different countries, while the Pontas Agency is known for selling rights directly from Barcelona into every single market.

Few agencies have bank accounts in four different currencies as we do in order to avoid rate exchange expenses for our clients.

PP: Who’s your most successful client?

AS-P: Luckily, we’ve experienced several successes over the years. At the moment, Spanish author Dolores Redondo is one of our more successful clients.  Her Baztan Trilogy has been published in more than 30 languages, the first installment has been adapted into a box office success in Spain and she won the Planeta Award last year with a standalone novel.

Although we don´t represent him anymore, we launched Swedish author Jonas Jonasson [The 100-Year-Old Man Who Climbed Out the Window and Disappeared], and between 2010 and 2012 we sold the translation rights of his first novel into 33 languages and he has sold millions of copies—almost five million in Germany alone. 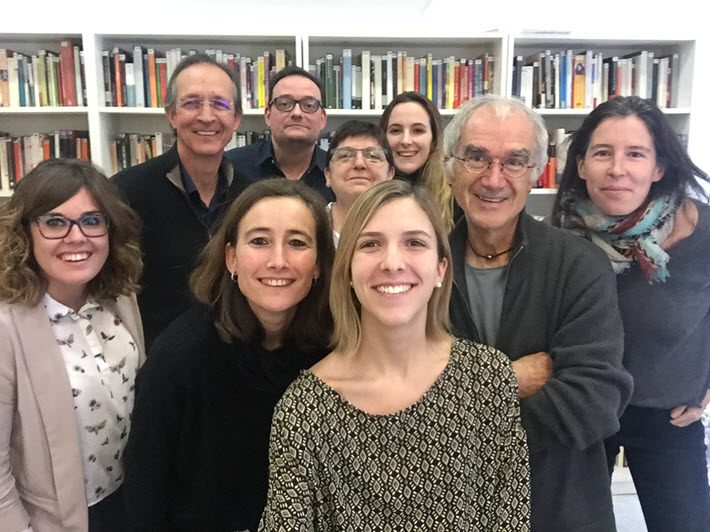 Anna Soler-Pont and her staff in Spain as the company turns 25. Image: Provided by Pontas Agency

PP: What made you decide to launch a film production company?

Film: “In Europe, Germany and France are the most important markets for us but this year, for the first time since I started, we feel they’re decreasing their rights acquisitions.”Anna Soler-Pont

AS-P: For years we’d been very active approaching film producers, both in Europe and Hollywood, in order to sell them adaptation rights. Sometimes I was so convinced of the film potential of a novel by a client that I even approached talent agencies willing to reach a certain director or actress with the book.  Sometimes I even wrote or commissioned a film treatment, a long synopsis, until someone told me that was the work of a producer and that, as a literary agent, I was never going to be paid for that work.

Eventually, we launched Pontas Films, a totally different company, although owned by the same three partners.

In 2014 we released the first feature film, Traces of Sandalwood, shot between Mumbai and Barcelona, in English and Catalan. The film won several awards, including the Audience Award at the Montreal World Film Festival 2014. We have co-produced two more films that hopefully will be released theatrically later this year.

PP: How does it work? Does it mean that you buy the film rights to a book?  It almost means you are a “publisher,” too.

AS-P: It means that I wear two different hats and I manage two different companies. As literary agents, we represent authors and manage their literary careers. As film producers, we produce or co-produce films.

PP: You must have a good overview of international markets: how are they performing? Who’s up, who’s down?

AS-P: Things change constantly. In Europe, Germany and France are the most important markets for us but this year, for the first time since I started, we feel they’re decreasing their rights acquisitions. On the other hand, countries such as Poland have become an important and strong market without making much noise.

In Asia, South Korea is the country to watch–it’s where, when a book sells, it sells a lot.

We’re rather new as agents in Latin America but we’ve experienced three recent successes, inside and outside its borders:

‘More To Do Than Ever’

PP: How do you see the role of agents now? Could the rise of self-publishing mean that agents aren’t needed?

“We call journalists in different countries to suggest interviews or articles when the publicists in the publishing houses are already thinking about other new titles.”Anna Soler-Pont

AS-P: I have the feeling that we have more to do than ever. Of course, we’re talking only about professional authors who try to make a living out of their writing.

Besides negotiating and selling rights deals in as many formats and languages as possible, agents like us are acting in areas that used to be the publishers’ territories.

For example, we work more than ever on editing the manuscripts with authors. Before we submit a novel to an editor, at least two people from the agency’s team—and sometimes an external professional reader hired by us—have read it and suggested some edits.

The same with publicity and marketing. At a publishing house, soon after new titles are launched they need to switch their attention. For us, every book deserves the longest life ever in the bookshops and the media.

Therefore we work a lot in digital marketing. We manage or help with several Facebook and Twitter accounts for some of our clients, and we call journalists in different countries to suggest interviews or articles when the publicists in the publishing houses are already thinking about other new titles.

AS-P: Ebook royalties are lower than we thought they would be some years ago. A fiction author needs to sell a massive amount of ebooks in order to get some good royalties. However, we’re glad to have had some very positive experiences too.

PP: How many unsolicited manuscripts do you receive? And do you look at them?

AS-P: We receive an average of 10 new proposals per day, in several languages.

When we’re looking for more authors in the French language, which is the case now, for instance, we tend to look at all of them. When we’re not looking to enlarge the number of authors writing in a certain language, then we don’t look at them. We try to write a note on our Web site explaining what we’re looking for.

Among those 10 manuscripts per day we receive, we’ve discovered some of our most successful novels and clients. For instance, Dolores Redondo’s The Invisible Guardian, which has sold more than one million copies in Spanish.

PP: You spent time in Cairo in 1991 and met Naguib Mahfouz.  What do you remember about the occasion?

“Ebook royalties are lower than we thought they would be some years ago. A fiction author needs to sell a massive amount of ebooks in order to get some good royalties.”Anna Soler-Pont

AS-P: I’d studied Arabic language and culture at the University of Barcelona and thought I’d become an Arab feminism specialist. I’d planned to spend some weeks in Cairo to practice my rough Arabic while I was working freelance in a publishing house in Barcelona, for which I had the chance to write and publish some articles and photos, too.

An editor found out about my trip and begged me to come back to Barcelona with a text by Naguib Mahfouz they’d commissioned from him. We’re talking about the pre-email and pre-cellphone era, pre-PDF times, pre-almost everything.

Meeting Mahfouz became the main purpose of my Cairo stay. And I ended up having tea at his place with his wife.

He told me, “Winning the Nobel prize is nothing. I’m just an old man. Come with me to a café by the Nile where you can meet young writers.”

The café was filled with writers, very few women among them. Several gave me their novels, asking me for help to get them translated into French or Spanish.

Back home, I took out the phone book and began calling prestigious publishers, including Gallimard in Paris. They all asked me the same two questions: “Are you a literary agent?” and “Who owns the rights?”

I printed my first visit card as agent in April 1992. What followed led to now, 25 years later.