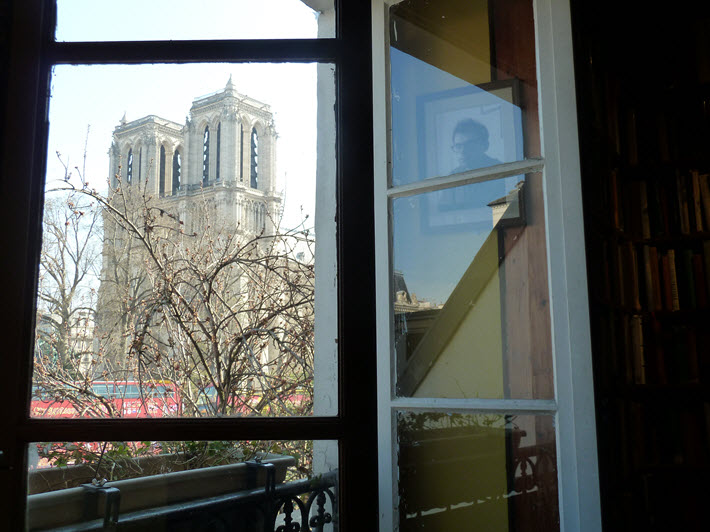 The two-store history of Paris’ bookshop Shakespeare and Company is recounted in a book the shop itself published last autumn. 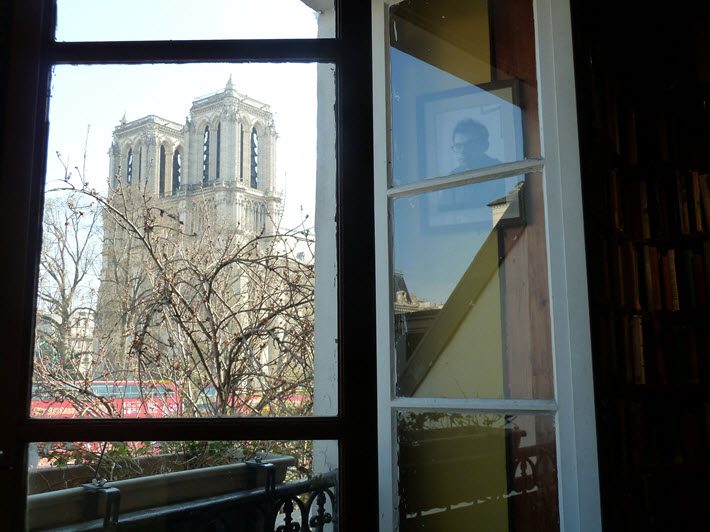 The view of Notre Dame from Shakespeare & Company in Paris. Image: Roger Tagholm

In any discussion of famous bookshops in the world–City Lights in San Francisco, El Ateneo in Buenos Aires, Foyles in London, The Strand in New York City–this Parisian institution has to be a contender. It may also be the most popular tourist-destination bookshop in the world, judging by the crowds outside on a recent visit in early spring.

Shakespeare & Company in March won the Bookstore of the Year Award at London Book Fair’s International Excellence Awards. One of the judges on the award’s panel–Jonathan Atkins, who is Pan Macmillan’s international director–spoke at the awards program to how the store has become a modern bookshop rather than resting on its literary laurels. It has an active online presence, a café, and a lively events program.

Of course, it’s those literary laurels that drive people to the shop today. They come in such droves that the store frequently has queues outside. And the importance of that literary history to the store’s bottom line can’t be overstated.

The American author George Saunders’ Lincoln in the Bardo was prominently displayed in March—and its sales may have been healthy—but a quick inquiry at the front desk on what was selling well demonstrated the power of this shop’s heritage. The bestseller every month is Hemingway’s 1964 A Moveable Feast, averaging 350 copies per month, according to staffer Eloise Morpurgo. 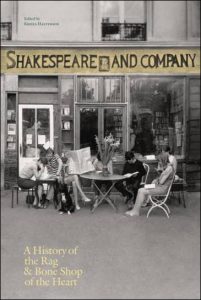 The Hemingway is one of what the store’s site calls Shakespeare and Company’s Cult Books, a collection that casts a wide net including work of Orwell, Camus, Beckett, Woolf, Hugo, Austen, Melville, Whitman, and many more.

The literary history that fuels such commerce is captured in the shop’s self-documentary book, released last September, Shakespeare and Company: A History of the Rag and Bone Shop of the Heart.

Krista Halverson, the book’s editor, arrived at the store from a literary magazine in San Francisco and was given the task of sorting through an extraordinary archive to put the shop’s biography together.

Shakespeare and Company is the name of two stores in Paris.

The original, for most of its life in the Rue de l’Odéon, was opened in 1919 by Sylvia Beach, daughter of a Presbyterian minister from New Jersey. She was a bibliophile and a traveller, eventually ending up in Paris where she became a prize-winning translator of Paul Valéry and Henri Michaux.

In 1922, Beach became the first publisher of Joyce’s Ulysses in its entirety and she coined the term “Bloomsday” for the day on which the novel about Leonard Bloom is set. By 1930, the store was part of the literary grand tour, with guides on American Express tour buses pointing it out to vacationers. 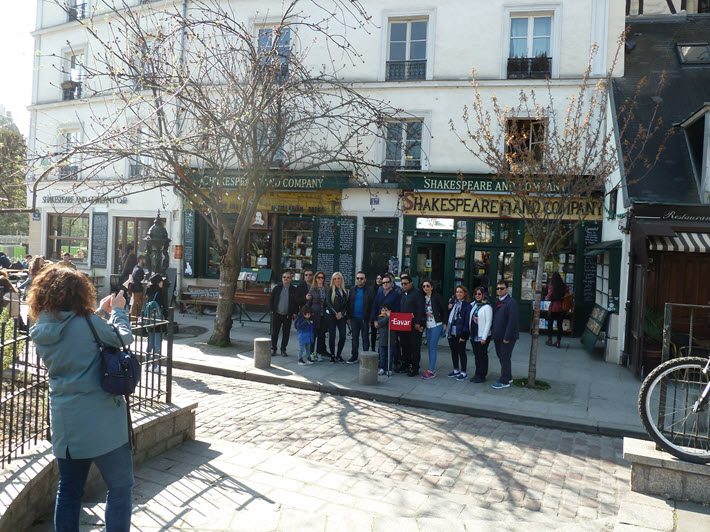 The German occupation led to the closure of the shop in 1941, five years before George Whitman would arrive from the States in Paris.

Whitman was raised in Salem, Massachusetts, and, like Beach, was a bibliophile. Having enrolled at the Sorbonne on the GI Bill, he opened a lending library, but longed to have a bookshop. And in 1951, when a small grocery store was up for sale, Whitman opened it as a bookshop with an inventory of 1,000 books from his personal collection.

It was originally called Librairie Le Mistral, and in 1964 became Paris’ second Shakespeare and Company at 37 Rue de la Bûcherie.  Richard Wright, author of Native Son and Black Boy was an early visitor, and the names and anecdotes that followed are the stuff of literary legend. Such lore comprises anecdotes including: 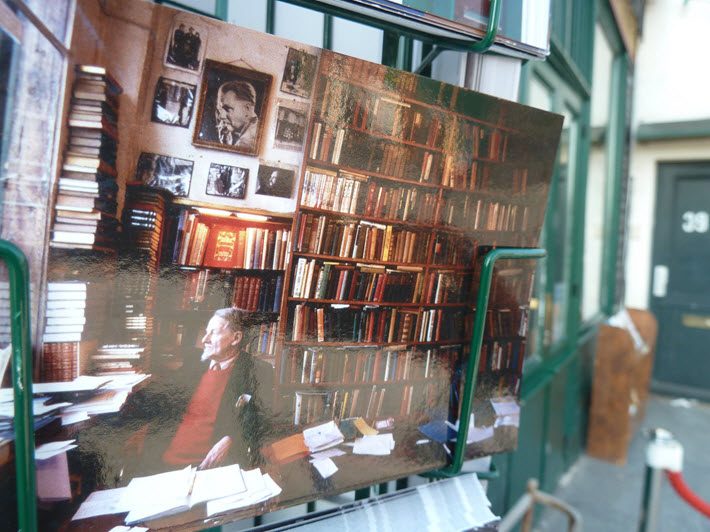 Some of them were Whitman’s “tumbleweeds,” literary wanderers he’d allow to sleep in the shop in return for a few hours’ work and the condition that they read a book a day.  And the tradition continues. Some 30,000 tumbleweeds are said to have worked at the store, according to Halverson’s book. It’s moving to read what the store meant to young writers like American AM Homes. “I used to think that Jack Kerouac was my father,” she told a journalist.

Australian novelist Kate Grenville is recorded saying, “I arrived a young woman from the outer reaches of the cultural world, as Australia was in the late ’70s, feeling like ‘stout Cortez’ on Darien with a wild surmise that there might be another world of writing out there. When George [Whitman] realised I couldn’t afford to buy books, he let me borrow them for free. The bookshop changed my conception of writing.”

The shop remains a magnet for writers.  There’s a Zadie Smith signing, Will Self proclaiming outdoors, and the surname of staffer Eloise Morpurgo marks her as Michael’s granddaughter. 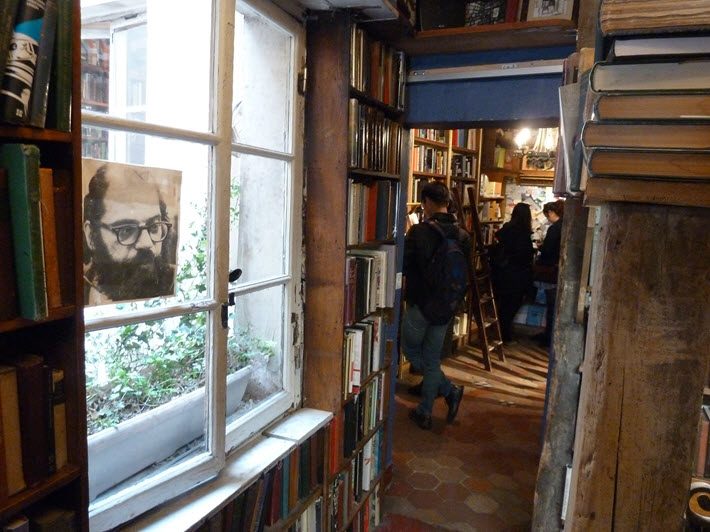 Today, the shop is owned by Whitman’s daughter Sylvia (named for Sylvia Beach). She took over in 2005 after finishing her history studies at University College, London. She talks affectionately about the modernization battles she had with her father, who died in 2011.

“When I first arrived,” she says, “we didn’t even have a telephone, and a publisher was threatening to cancel our account for not paying invoices. I had to ring their collections department in England from a payphone, depositing more and more coins so we wouldn’t be cut off. I wanted to improve the book stock too, and we needed a computer system to keep inventory.”

Now, there’s phone and computer service, of course, plus a children’s department and Flapjack Kerouacs served in the café. Jeanette Winterson, in her foreword to the shop history, writes, “This is books as batteries, recharge moments, envelopes of energy sent across the world with love…I come here and sit in a hundred years of time with a hundred years more waiting their turn.

“Books don’t date; the language changes, the problems shift, but the wrestle with what is human stays the same. That’s why we can read Shakespeare or Balzac in the morning and AM Homes or Dave Eggers in the afternoon…Shakespeare and Company is part of that creative continuum.”