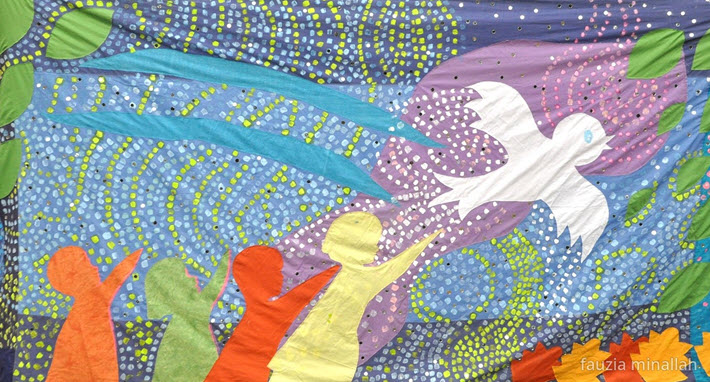 In one of her books, Fauzia Minallah says, ‘the sky is filled with so much light that the people are able to see their own mistakes.’ Her ‘Scarf of Peace’ is leading to a book of that title. 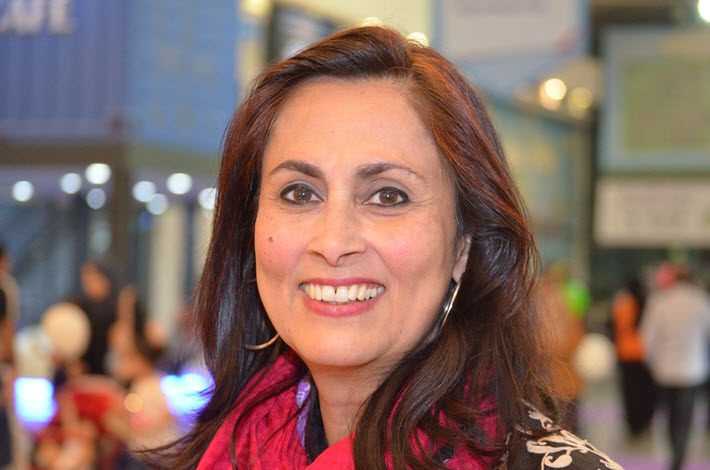 For Children ‘Who Face Persecution and Discrimination’ 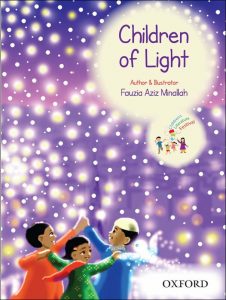 The 110-foot-long cloth mural features a “bird of light” called Amai. It’s the work of Pakistani children’s author and illustrator Fauzia Minallah, who is recording the reactions of children for a new book provisionally entitled The Scarf of Peace.

The bird, present in some form in each panel of the scarf, takes children on adventures around the world and spreads a message of love, peace and tolerance.

Minallah says she now has seven children’s picture books and two coffee table books for  young adults. She lists among her publishers the National Book Trust of India and Oxford University Press in Pakistan. 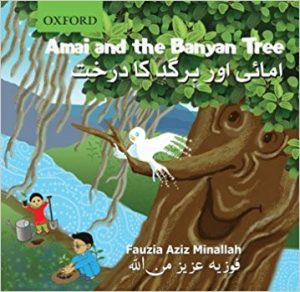 Her titles produced by OUP Pakistan include:

Probably her best-known title is Sadako’s Prayer, which she illustrated for its 2006 publication by ANT-Hiroshima, a UNESCO non-governmental agency that works operates in countries including Afghanistan, Pakistan, Nepal, and Bangladesh. 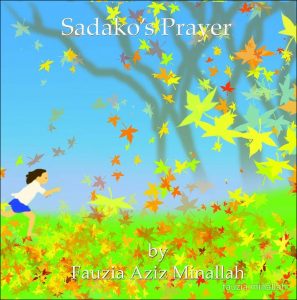 The story, published in several tellings by other authors, is that of Sadako Sasaki, a schoolgirl who survived the 1945 bombing of Hiroshima but succumbed in 1955 to the leukemia she contracted as a result of the attack. Sasaki hoped to remain alive by adhering to a legend that says that someone who makes 1,000 origami cranes will have her or his prayer answered.

According to information from ANT-Hiroshima, the book has been translated into Japanese, Urdu, and Dari.

Minallah studied communication design at New York’s Pratt Institute and international relations at Quaid-e-Azam University, Islamabad. She both writes and illustrates her books.

Publishing Perspectives had a chance to speak with Minallah about the project and the role of children’s books, during Sharjah Children’s Reading Festival in April. 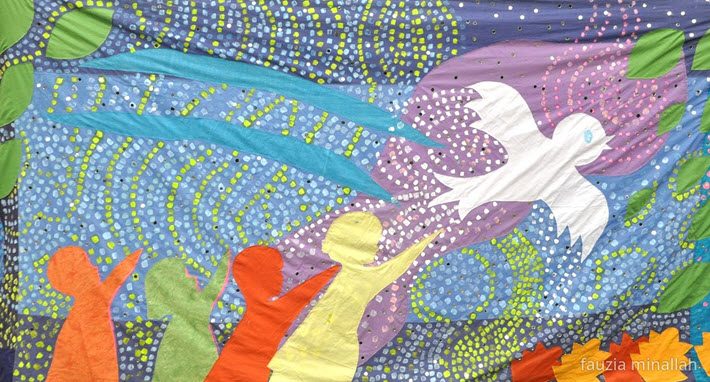 ‘Refugees in Their Own Country’

Publishing Perspectives: Can you tell us about the scarf project?

“We’ve lost thousands of friends and loved ones, yet some perceive every little boy from these countries as a potential terrorist and every girl wearing a scarf as an extremist.”Fauzia Minallah

Fauzia Minallah: Scarves have occasionally featured in my work as an artist and as a theme in my art workshops with children.

In 2009, I made a very long scarf, almost 110 feet long, which I called “My Multicolored Scarf of Peace.” I designed the scarf myself, cutting out the shapes from different colored cloth pieces and stitching them all together. Afterward, I painted the dots and embellished it with tiny mirrors, which are used in the traditional Baloch and Sindhi embroidery in Pakistan.

It weighs 16 kilos (35 pounds) so I can fold it and take it with me wherever I travel.

It’s sad that when Pakistanis or Muslims are called terrorists, and yet we’re the biggest victims of terrorism. We’ve lost thousands of friends and loved ones, yet some perceive every little boy from these countries as a potential terrorist and every girl wearing a scarf as an extremist.

“The Multicoloured Scarf of Peace’ is dedicated to all those children who face persecution and discrimination. My scarf can be worn as a Sari by a Hindu woman. And a Jew, Muslim, Christian or Buddhist–someone from any other religion–can wear it in any way they like. 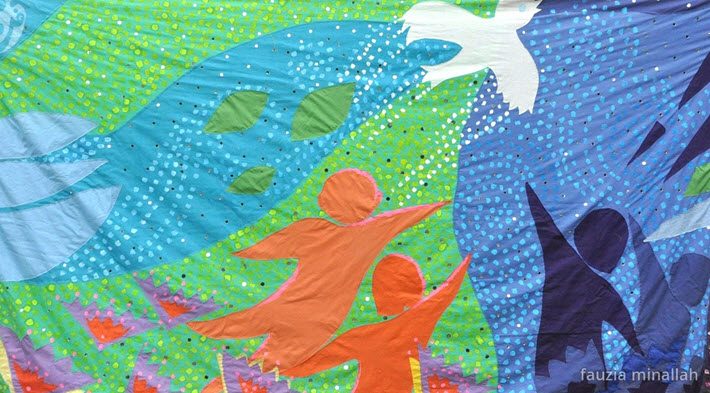 ‘To Instill the Right Values’

PP: How do you see the potential for children’s books to promote peace?

“I love to shatter some preconceived notions about identity and stereotyping. I like to tell children that it’s possible to find love and friendship with people who are different from them.”Fauzia Minallah

FM: I think it’s beyond the capacity of an individual writer to promote a national culture of peace. That depends on the policy of governments and politics around the world. In my opinion, the syllabus or curriculum that a child grows up with has a great impact on a culture of violence or nonviolence in a society. But as writers and artists, and as people working with children, it’s our individual responsibility to promote peace through our art.

PP: How do you try to do this, yourself?

FM: I try to do it by using my art in promoting tolerance and multiculturalism. I’ve made it a point that while there are many people who glorify violence and wars, I can’t do that through my work. I’m grateful to the Children’s Literature Festival in Pakistan [held in February]. There, I get the opportunity to interact with children, and I’m grateful to all the organizations around the world that give me the opportunity to interact with thousands of children.

PP: Do children’s writers have a responsibility to present a certain view of the world, to instill the right values in their young readers?

FM: Absolutely. We have to promote respect for all religions and races. I love to shatter some preconceived notions about identity and stereotyping. I like to tell children that it’s possible to find love and friendship with people who are different from them.

‘A Feeling of Being Special’

PP: What’s your background? How did you start writing and illustrating?

“I believe art and books may help in alleviating some of the trauma these children have experienced.”Fauzia Minallah

FM: I was born in Quetta [in northwest Pakistan, near the border with Afghanistan] but lived in many cities as a child because my father worked for the government and he was posted to different parts of the country.

I was always encouraged by my parents to draw and they gave me a feeling of being special because I was able to draw well. So from a very young age I have been drawing and painting.

I’ve lived in Islamabad for 30 years, but for the last two years I’ve been dividing my time between Islamabad and Munich.

PP: What are your feelings about the refugee children who have experienced trauma and displacement?

FM: I believe art and books may help in alleviating some of the trauma these children have experienced.

Karachi Literature in Monday: May 20

PP: What are you working on now?

“Even a Pakistani labels another Pakistani a terrorist. Sometimes, unimaginable atrocities are committed by people of your own religion and ethnicity.”Fauzia Minallah

FM: This month, I’ll be participating in a group exhibition of women artists in Munich whose theme is “Solidarity With Women Refugees.”

The video of my ‘Multicolored Scarf of Peace’ will be shown, along with my paintings, and then in September the scarf itself will be a part of the exhibition in Munich.

On May 20, I’ll be in London for the Karachi Literature Festival which will be held for the first time in London at the Southbank Centre, organized by Oxford University Press, Pakistan [as part of the Southbank’s annual Alchemy Festival and to mark the 70th anniversary of the creation of Pakistan]. Besides that, I’m working on illustrating and writing two more books for children.

PP: How did you find your experience in Sharjah? Was this your first time in the Gulf? 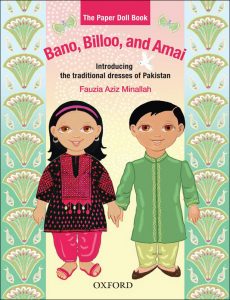 FM: This was my first visit to the Gulf and it was a wonderful one, especially meeting the children and finding out that there’s a very big population of Pakistanis and Indians co existing without conflict in the United Arab Emirates. That was very enlightening.

I had the most enriching workshops with children in Sharjah and Dubai, where I took the scarf to three different schools and shared it with them. One school had 8,000 students, all Indians, Pakistanis, Bangladeshi, Afghan, Nepali and other children from South Asia. Their reactions were beautiful.

PP: In a panel on promoting peace through children’s books, you answered a woman from Saudi Arabia that there were “many Palestines” in the world—can you expand on this please?

“I wish people didn’t have selective outrage about atrocities, but felt the pain of every human being, whether they are our enemies, or our friends.”Fauzia Minallah

As I’ve mentioned earlier, even a Pakistani labels another Pakistani a terrorist. Sometimes, unimaginable atrocities are committed by people of your own religion and ethnicity. All I can say is that in my children’s book, The Children of Light, it ends with a scenario in which the sky is filled with so much light that the people are able to see their own mistakes.

At an international level, that’s the sad part–that countries don’t see their own mistakes, but blame others. My heart goes out to the Palestinians–I hope they find justice. But I wish people didn’t have selective outrage about atrocities, but felt the pain of every human being, whether they are our enemies, or our friends. 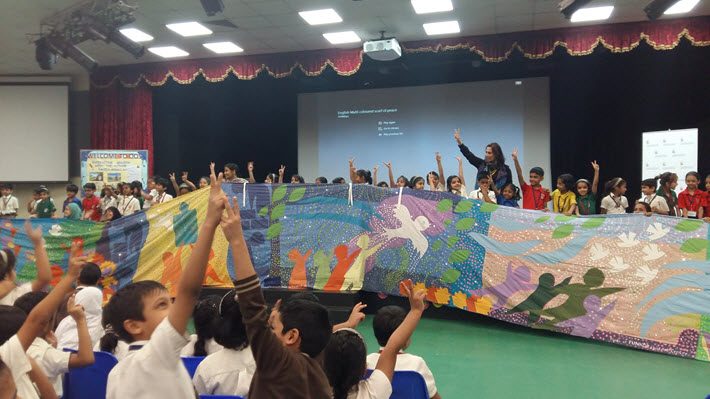