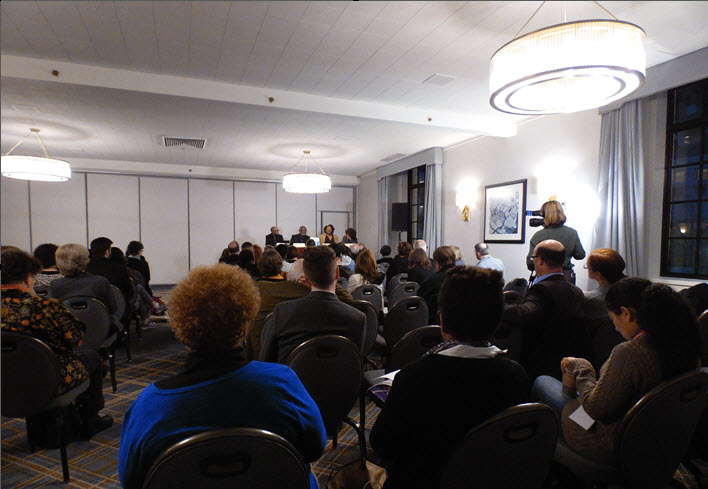 A writing conference in Boston explores issues of diversity and racism, and how the publishing business can better reflect and engage with America’s increasingly diverse population.

“Who We Are When We’re At Home: The Black Experience in Boston” at Grub Street’s The Muse and the Marketplace on May 5. Image: Porter Anderson

While a high-level discussion about the black experience in Boston isn’t what authors, agents, publishers, and others might expect from every large writers’ conference, it’s exactly that event which this month has helped restate the unusual character of The Muse and the Marketplace.

The annual conference, held early in May, is a production of the 20-year-old Grub Street creative writing center, and in January was named the top writing conference in North America by The Writer Magazine.

The key here is the program’s relationship to its community. While the conference doesn’t have the national and international visibility of such events as the Writer’s Digest conferences, it has a close understanding of its key attendees, most of whom are regionally based participants in the Grub Street program, headquartered near Boston Commons. Publishers, editors, agents, vendors and others make the trip to Boston each year to work with close to 1,000 serious writers–some of whom have going publishing careers already under way while others are just working their way into the intricacies of the business.

Last spring, the conference hosted a “Writers of Color Roundtable” in response to perceived divides in the community’s creative life as well as other elements. With Grub Street’s Sonya Larson at the helm, the event gave rise to an ongoing Writers of Color group.

This year, the conference, which is devised by its artistic director, Chris Castellani, went even deeper into the question of a major community trying to cultivate its own diversity. “Who Are We When We’re at Home: The Black Experience in Boston” was a strikingly frank explication of its topic, moderated by Boston Globe associate editor Renée Graham. 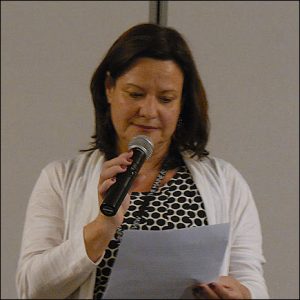 And the guiding hand here is Eve Bridburg, Grub Street’s founding executive director, who’s one of the Boston creative community’s key figures. She consistently has responded to her city’s issues with an understanding of her organization’s responsibility to address them. The “Who We Are When We’re at Home” evening was open to the public as well as to conference attendees and was sponsored by Grub Street and The Muse, with support from the Boston Literary District and the Mayor’s Office of Resilience and Equity.

“Adam Jones was just jeered with racist taunts and had peanuts thrown at him at Fenway Park,” Bridburg said to a packed room for the event on May 5. In what might have started as a longer welcoming introduction, she needed to say little more. By coincidence, the incident, in which the Baltimore Orioles’ center fielder had been abused with racial slurs had occurred just days earlier and had triggered a firestorm of controversy.

The event, ironically, gave powerful contours to the evening’s purpose.

It already had prompted moderator Renée Graham to write at the Globe about what would become a thematic touchstone throughout the evening: the idea that Boston is a city deeply divided by racial issues and yet accustomed to seeing itself as better. Bridburg read to the audience from Graham’s column, Stop Pretending Boston Is Something It’s Not. 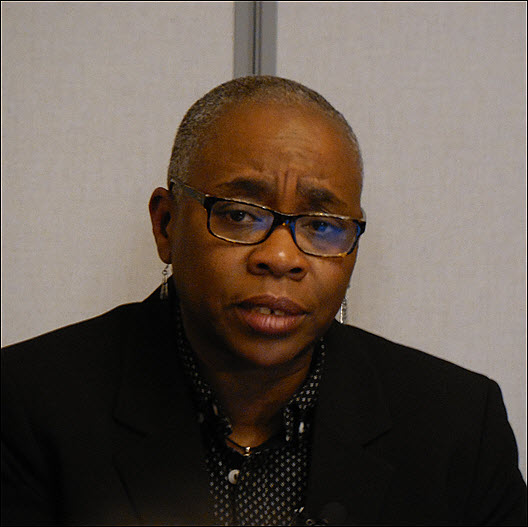 “The layers-deep racism that has become as much a part of this city’s national image as clam chowder and winning sports teams.

“What happened to Jones does not surprise people of color, but it breaks our hearts. This is our home, a place we have chosen to live, and even in an arena where there should be no greater concern than the game’s score, a potentially racist act lurks like a ghoul. Shocked politicians apologized to Jones, but when I heard the news I nodded with sadness and bitter familiarity.

“For many, the Jones incident is news; for those who know better and understand how it feels when an epithet is sharpened and aimed directly at you, it’s just another demoralizing day.”

And as Graham opened the discussion, she told the audience, “The sad and dangerous fact is that in Boston, racism is so pervasive that it’s been normalized. It’s been rendered invisible. But not to those of us who must endure it in some form or fashion.” While Graham declined to name Boston the most racist city in America, she said that her experience of living there has led her to understand the city as a place in deep denial.

This would become the evening’s key point: the idea that a city brimming with educational and cultural sophistication and thought of by many as a pillar of egalitarian values is, in fact, among the most practised communities at overlooking its actual nature. This is “Boston’s brand of racism,” she said.

Thanks to a very good taping made by NPR flagship, Boston’s WGBH, through its Forum Network, you can see the discussion, yourself.

‘We Tend to Absolve Ourselves’

“A lot of people think that segregation today is somehow different from the segregation that we used to have, not connected to any of the history that we have as a country and a city.S. Atyia Martin

The poet, Coe, for instance, made the point that “There are a lot of racists in this city” and “This is a racist city” are two very different statements…”When I talk to my artist friends who are black, one thing we talk about is the fact that if it weren’t for white folks, we’d starve.” His point was that African-Americans don’t participate in cultural events as they could do.

“And there’s nobody standing at the door saying, ‘You can’t go in,'” he said. “We are self-selecting ourselves out of a lot of what goes on in this city.” At the same time, he said, the cultural organizations may be vesting their diversity initiatives in committees made of of white members.

“There’s a tendency to find a comfort level…It’s not an intent to isolate, it’s just water to the fish. …Our challenge is to challenge people on that mentality.”

Along those same lines, the historian Greenidge said, “If we look at racism as something that’s somebody in a hood or somebody who doesn’t like somebody or somebody who says outrageous things, it means we tend to absolve ourselves—particularly someone who considers themselves to be progressive people—as ‘That’s not us.’

“But it’s all of us. It’s American history.”

“A lot of people think that segregation today,” the mayor’s resilience officer said, “is somehow different from the segregation that we used to have, a unique brand of thing that somehow is not connected to any of the history that we have as a country and a city.

“When I talk to my artist friends who are black, one thing we talk about is the fact that if it weren’t for white folks, we’d starve.”Charles Coe

“We have segregation because we have a long history of policies and practices that said that people can’t live in certain places. And not only could you not live in certain places, even if you had the economic wherewithal to, they wouldn’t guarantee your loan.” Boston, she said, in terms of demographic mapping, “looks pretty much the same. There are just more people of color now than before.”

The Muse and the Marketplace conference would go on to field courses in craft and business, characterization and working relationships with editors, creating book proposals and marketing plans and issues of voice and rhythm in prose.

But the conference overall would be subtly enriched throughout its three-day run by the fact that it had done what we frequently boast that good literature does: it had accessed several pressing universal values by starting with a highly localized struggle of real-time political and social importance.

There are chances for many of our publishing events to do this, whether they’re aimed at the creative or business sectors of the industry. Grub Street and The Muse program have become leaders in reminding us of this. 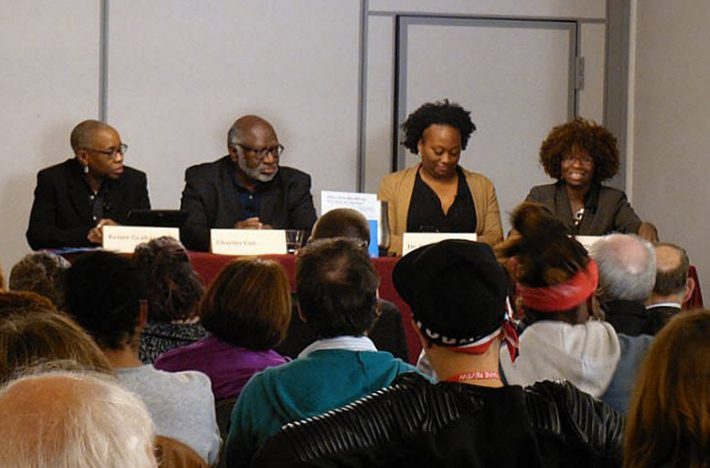