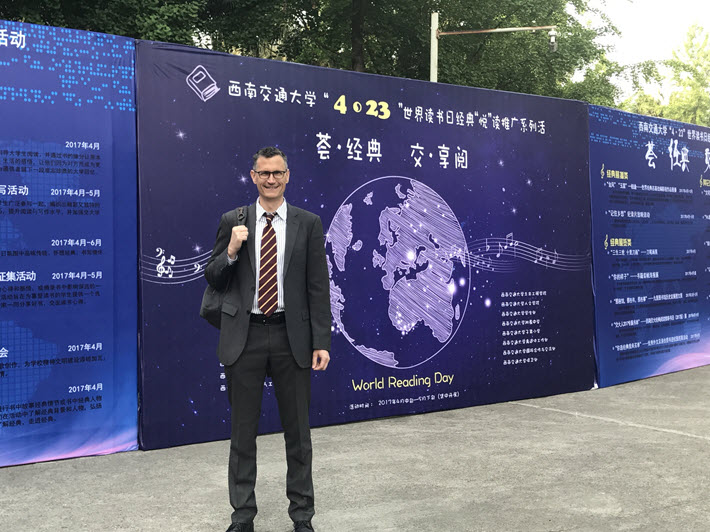 Saying that ‘books are like glue, binding peoples together,’ the International Publishers Association’s president stresses commonalities over controversy in his first speech in China. 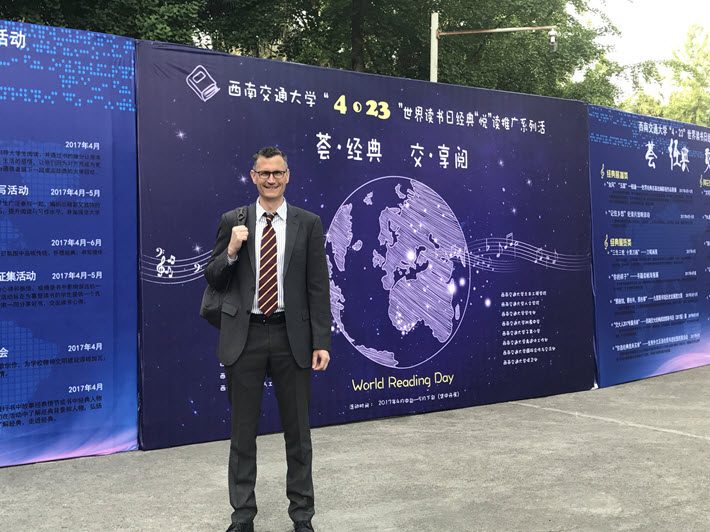 ‘Publishing Is About More Than Just Commerce’

In a gesture of what might be called literacy diplomacy, the International Publishers Association‘s (IPA) newly installed chief Michiel Kolman spoke last week in China in recognition of UNESCO’s World Book and Copyright Day.

The full text of Kolman’s comments at Chengdu is available on the IPA’s website (PDF). And those remarks may seem to some to have been a rather deft effort by Kolman to reset the organization’s relationship with China.

The event was called a reading promotion summit, and it gave Kolman a chance to step out with something of the even-handed tone he expects to bring to his IPA leadership, which follows that, of course, of Richard Charkin.

“My vision for the IPA,” he says in the text of his address at Chengdu, “is of a strategic organization working for and with a strong, cohesive, engaged membership. We’re building on our interactions with the UN agencies in Geneva, in particular the World Intellectual Property Organization and the UN Human Rights Council.”

Despite that mention of human rights, Kolman places his emphasis in this address tightly on literacy, only suggesting in his title—”Literacy: The Third Pillar of the IPA”—that there’s more. He first gets at the issue through some remarks about the importance of libraries: 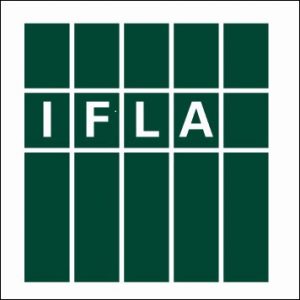 “Since I know that there are a number of library leaders here today, I’ll tell you about our work with the library community. Sometimes the relationship between publishers and libraries is wrongly characterized as adversarial. The IPA actually has a very positive relationship with the International Federation of Library Associations and Institutions (IFLA).

“And this is important, because publishers fully recognize the vital role libraries play in developing reading culture and in supporting the wider book ecosystem. The IPA and IFLA meet regularly to discuss areas of common interest, to cooperate and communicate on the different challenges faced by publishers and libraries.

“For instance, on September 8, 2015, International Literacy Day, the IPA and IFLA together called on UN member states to do more to promote literacy. The joint statement underscored the power of libraries and publishers to help UN member states to reach their Sustainable Development Goals (SDGs) on literacy.” 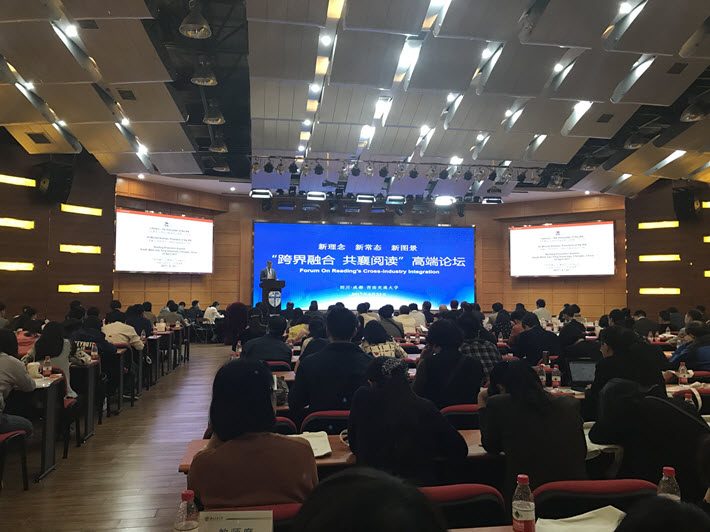 Kolman speaks about how World Book and Copyright Day has its roots in the International Publishers Association. Its inspiration, he tells the audience, “came in 1995 from the mind of one of my predecessors as president of the IPA, a Spanish publisher named Pere Vicens. Pere’s vision was to create a moment when literacy and reading could be brought to the front of people’s minds for a day, wherever they were in the world.

“Publishers are the engine that powers books and literacy—they’re the most important link in the literacy chain.”Michiel Kolman

“The IPA already had a strong relationship with UNESCO even then, so it was a natural step for Pere to seek their support. UNESCO had the international clout to make his idea a reality and mobilize governments around the world, which they did very efficiently in just 12 months.”

Kolman observes that “books are like glue, binding peoples together and immortalizing human commonalities.”

He then goes on to say, “Since it was founded in 1896, the International Publishers Association has been shaped by and committed to that principle. And our message is equally clear: publishers are the engine that powers books and literacy–they’re the most important link in the literacy chain.”

What might puzzle the average reader of these comments is the question of why the chief of the International Publishers Association would go to such lengths to extol literacy. There’s nothing wrong with literacy, of course, quite the opposite. But isn’t it a fundamentally obvious point, that publishers support literacy? How can they do otherwise when they need literate consumers to survive?

Literacy’s position as one of the IPA’s three pillars of interest comes out when Kolman refers to the IPA’s trio of key interests:

What’s not mentioned in his commentary has more to do with the first of those points than the one about literacy. Indeed, he refers to the Publishers Association of China’s membership in the IPA since 2015, but without referring to what a deep, at times bitter controversy was triggered by that membership last year. 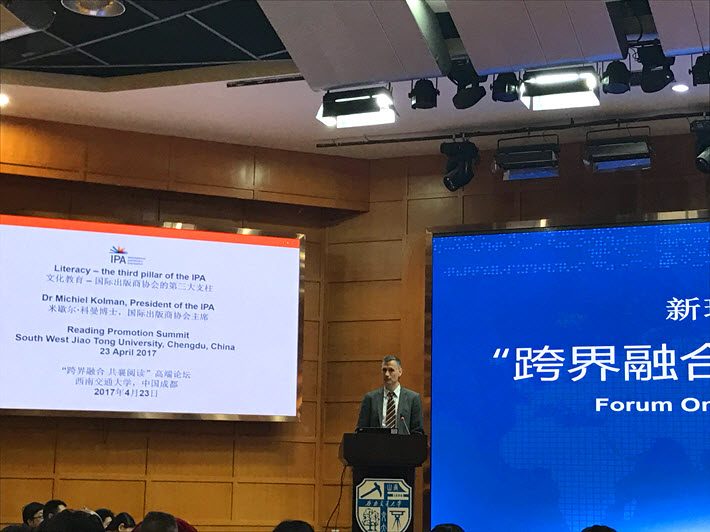 Background on the Disagreement

In March, Publishing Perspectives reported on Kolman’s comments at London Book Fair. The year before, IPA’s 31st congress in London was heavily impacted by the organization’s vote to include China in its membership. The debate, some of it heated, ended up in an emergency session that turned on whether inclusion or exclusion is the right response when a nation’s government stance on freedom of speech, freedom to publish, and human rights overall is in question, as Beijing’s stance is.

“I see publishing as a motor of human and social progress first and a commercial endeavor second. There is no more time-honoured and successful way of curating, expressing and preserving ideas, stories, opinions, beliefs and facts.”Michiel Kolman

The question became, last spring, one of the most classic in modern diplomacy: when faced with a regime that’s deemed, at least in some quarters, repressive, is it better to engage in dialogue or to ostracize? And, in this case in particular, does it make sense to hold a country’s publishers responsible for the actions of their country’s government?

Should the Chinese publishing community be kept at arm’s length when some of Beijing’s policies cause distress? We might also ask, should US publishers’ participation in IPA be questioned when the Trump administration’s actions cause displeasure?

Needless to say, many in the West see Beijing’s policies on dissent and its treatment of political dissidents as troublesome, to say the least. In publishing, this has focused most acutely on incidents in which books professionals disappeared in late 2015.

It might be expected that these thorny concerns about how China may handle its bookish citizens and others were high in the minds of some IPA members who objected last year to China’s membership in the organization. Much work went into the follow-up to these issues. There’s more about this controversy here and here  and revised membership statutes that resulted are here.

Suffice it to say, it seems that today, China’s publishers’ association might not have achieved membership in the IPA as quickly as it did in 2015. 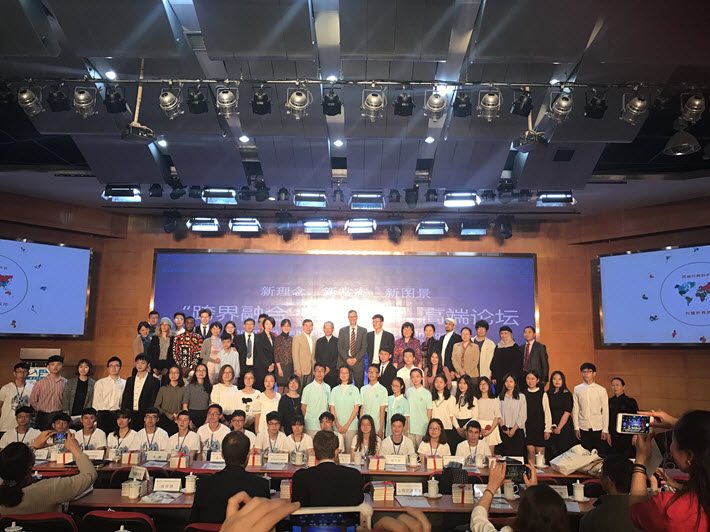 Participants in the Chengdu reading promotion summit gather onstage for a photo. Image: Provided by IPA

In Kolman’s comments from Chengdu, he repeats some of his March commentary from London—much if it focused on the size and importance of the Chinese market—and he carefully walks around that cluster of topics that come under the heading of freedom to publish. The points of emphasis in this passage are his: 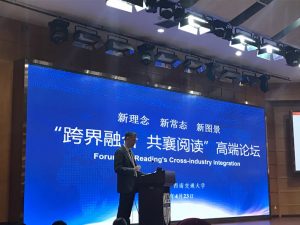 “The addition of the Publishers’ Association of China to the IPA family–along with publishers associations from several other countries–means the IPA now represents publishers that service around 5.6 billion people worldwide–that’s 75 percent of the world population. This means our members’ collective voice today carries further and speaks for more publishers than ever before.

“We are proud to be entrusted with this role, because the publishing business is an exciting, pioneering and necessary one – no matter where it’s happening.

“But, in reality, publishing is about much more than just commerce.

“I see publishing as a motor of human and social progress first and a commercial endeavor second. There is no more time-honoured and successful way of curating, expressing and preserving ideas, stories, opinions, beliefs and facts. It’s a process that enables the education, information and entertainment of billions of minds every day. In terms of impact on the human cultural journey, intellectual progress and international comprehension – no other industry compares.”

Telling the Chengdu audience that “Chinese publishing is nothing short of a modern-day marvel built on a deep-rooted Chinese tradition of education and reading, culture and literature,” Kolman signs off with the grace of friendship, not the grip of controversy. And time will tell whether literacy diplomacy is the most effective entry point for international cooperation.